Elusive. If you follow my blog, you know that I am on the verge of completing a lifetime first; landing a trout in each month of the calendar year. In 2017 I netted a trout in every month except January. During January 2020 I landed two trout on a mild day near the end of the month and then notched another pair on the first day of February. I salvaged May after heart surgery recovery with a few trout at the end of the month. The final hurdle is December, and some unseasonably mild weather featuring a high temperature in the low sixties encouraged me to make another attempt on Tuesday, December 8.

Initially I selected the North Fork of St. Vrain creek as my destination because of its lower elevation, but the DWR web site displayed flows of 0 CFS. I was unsure whether this was a technical glitch in the gauge or evidence of a dry streambed, so I called the Laughing Grizzly fly shop in Longmont. The young man who answered the phone was very patient and helpful, and he informed me that work was being done on the turbines at Buttonrock Dam, and only a minimal amount of waters was trickling through the canyon to keep the fish population alive. The Laughing Grizzly was asking anglers to refrain from fishing the creek to avoid stressing the trout. I respected his request but then asked what site he would recommend as an alternative. He promptly responded with the Big Thompson River and suggested two sections. I knew the Big T was also registering minimal flows of 14 CFS, and he agreed that the fishing was challenging in the low and clear water, but customers provided reports of decent success. I decided to heed his advice and headed to the Big Thompson River west of Loveland, CO. 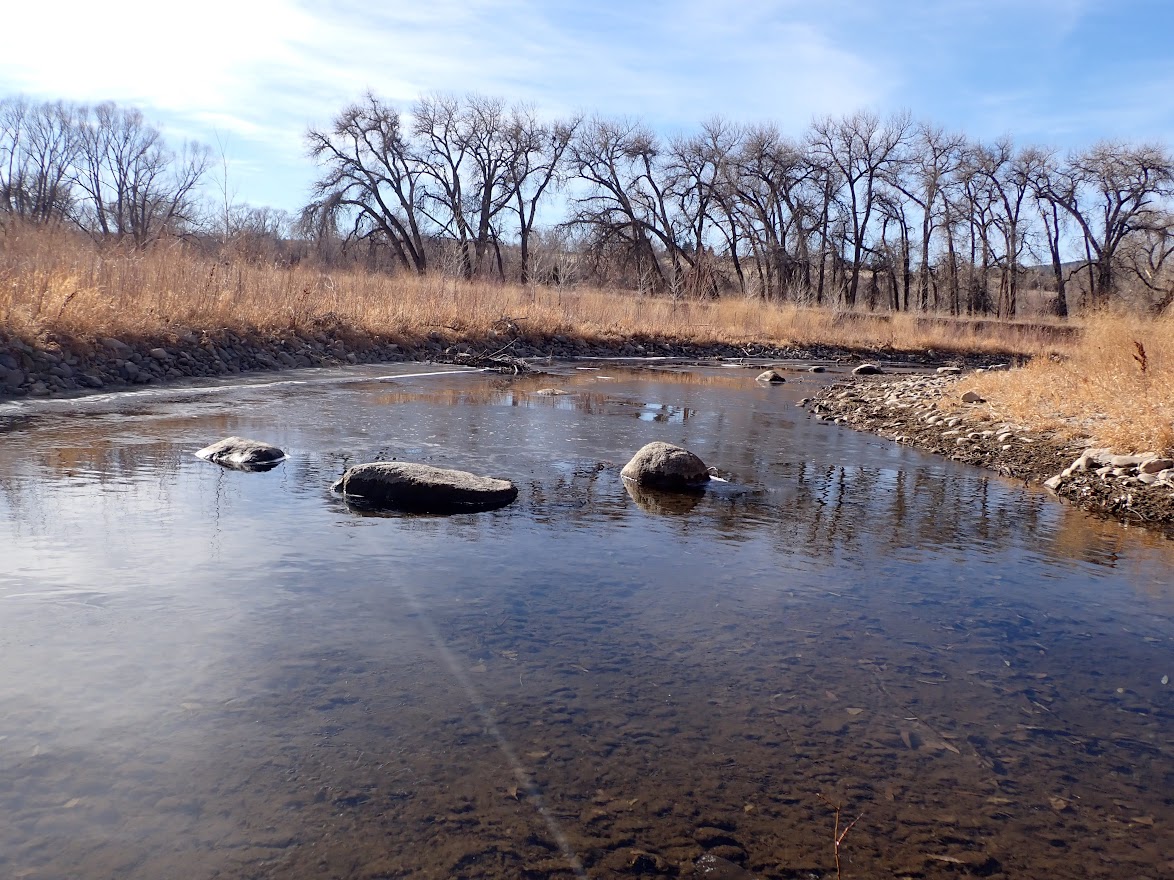 I arrived at 11:30 and quickly pulled on my waders and assembled my Orvis Access four weight rod. By the time I was ready to fish, my watch displayed 11:45AM, so I sat in the car and munched my lunch. By noon I began to hike downstream on a narrow path. After .3 mile I arrived at a section with a slow moving current through an area of moderate depth along the northern bank. As I traveled along the river on my downstream hike, I noted many areas with very thin shelf ice.

I pondered my choices for a fly fishing method and settled on indicator nymphing that utilized poly yarn. I pulled out my New Zealand strike indicator tool and attached the poly yarn and then knotted an orange perdigon and classic RS2 to my line. The perdigon contained a tungsten bead, so I chose to forego a split shot. I began working my way upstream and disturbed a twelve inch trout in the first pool. My optimism surged with the sighting of a trout in a never before fished section of the Big Thompson River. 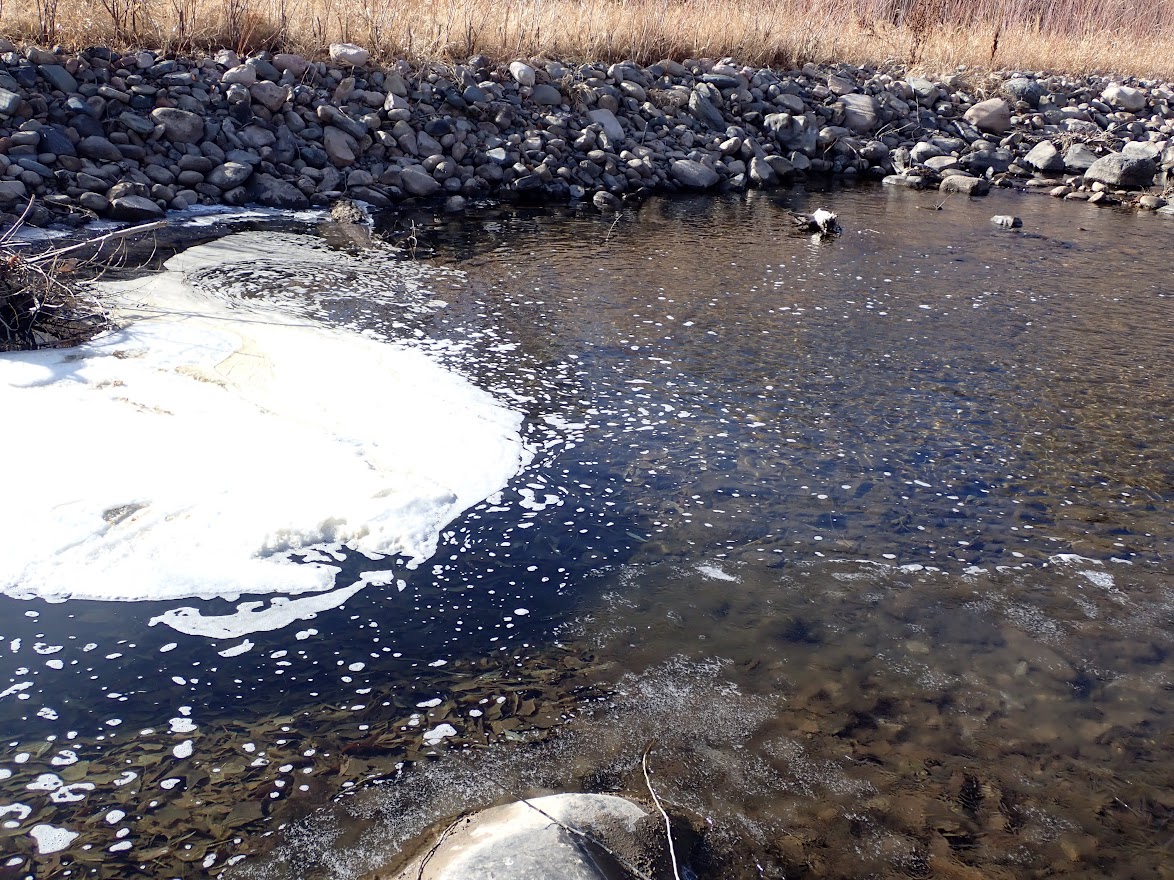 The Ice Shelf Created a Dam

I persisted for the next .2 mile, but landing a December trout remained an elusive goal. In all fairness the circumstances could not have been more challenging, as much of the river was wide, shallow, clear and very slow moving. The light indicator minimized the entry disturbance, but not completely. I sought out the places with faster currents and riffles at the head of pools in order to mask the splash down of my casts, but even that ploy failed to allow success. During this time period I swapped the RS2 for a zebra midge, but the change was not effective. 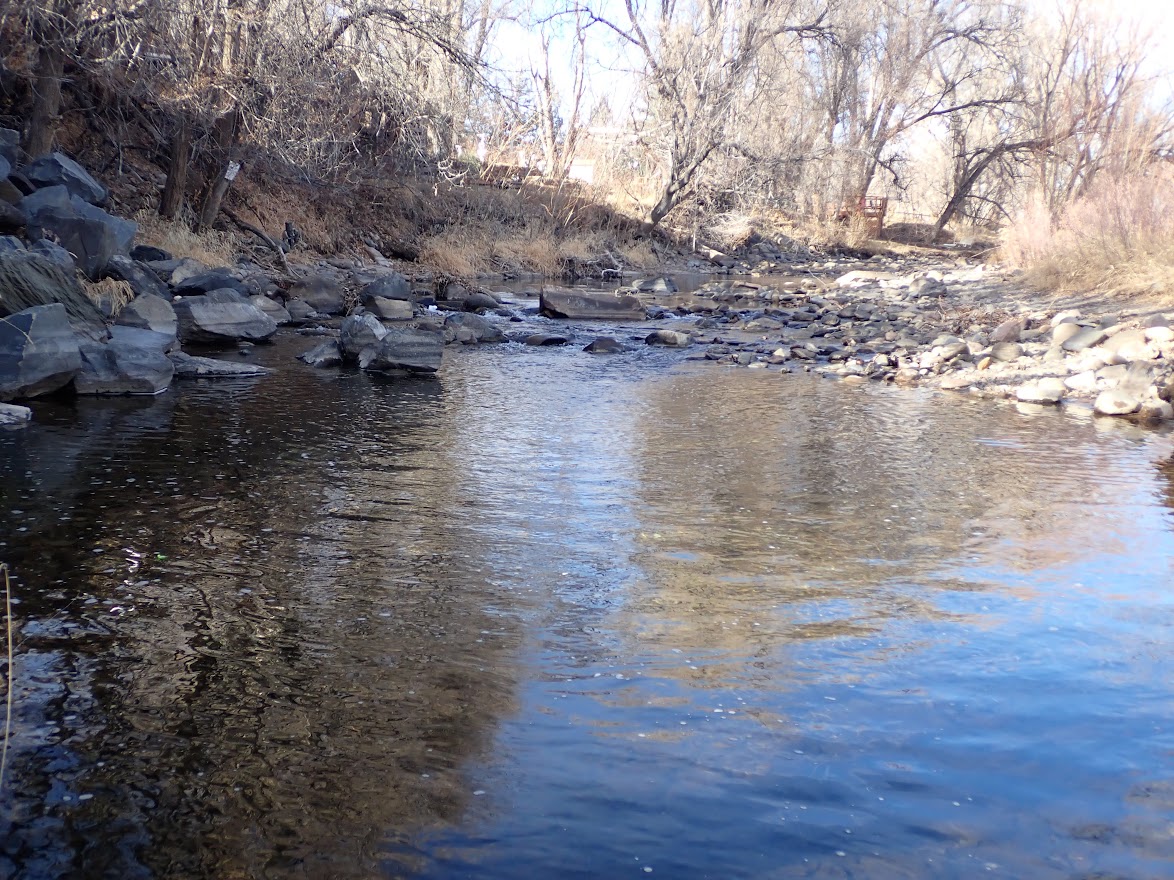 One of the More Attractive Runs

After .2 mile I arrived at a highway overpass and continued for another short distance. The character of this section was more conducive to trout, as the streambed narrowed and large boulders created nice deep runs and pockets. Unfortunately only three such segments appeared, before I encountered some yellow private property signs. I spotted one more small trout, that I disturbed from a deep hole, and I would have been happy to land it to reach my December trout goal. Since I ran out of public real estate by 2:15PM, I decided to drive back downstream for a couple miles to a stretch near my friend Lonnie’s house.

When I arrived on the south side of the river beyond a bridge, I parked and then hiked on a dirt trail that followed the river to a fence with a no trespassing sign. At this point I veered to the right for a short distance and intersected with the river. For the last half hour of the day on Tuesday I migrated upstream with the perdigon and zebra midge and prospected likely spots, but once again the fly fishing gods thwarted my efforts to land a December trout. After three hours of fishing my December trout remained elusive. Weather will dictate whether I enjoy additional opportunities to achieve my 2020 goal of a trout in each month of the year.