Location: Four miles below Lake Estes and then near the downstream border of the special regulation water

Mild autumn weather continued on Monday, October 22, and this stroke of good fortune prompted me to make a drive to the Big Thompson River below Lake Estes. I arrived by 11:15AM, and after I assembled my Orvis Access four weight, I was on the water casting by 11:30AM. The air temperature was in the low fifties, so I wore my long sleeved Under Armour undershirt, fishing shirt, and a gray fleece. When the sun was out, I was a bit warm, but when a cloud obscured the sun, and the wind kicked up, I was dressed appropriately. The Big Thompson flows were 47 CFS, and this seemed on the low side, as quite a bit of the riverbed was exposed, but adequate deep pools and pockets provided cover for the stream residents. 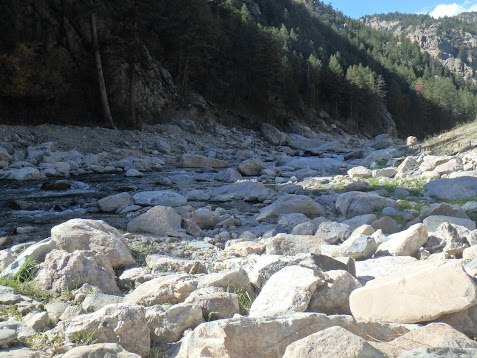 Vegetation Absent Since the 2013 Flood

I began my day with a single size 18 gray deer hair caddis, but the ten minute trial period was a resounding dud, and the tiny caddis adult was very difficult to track in the shadows and glare. I swapped the caddis dry fly for a peacock body hippy stomper and added a beadhead hares ear and ultra zug bug. With this three fly combination I was confident that I would attract attention, but after an hour of futile casting I could point to only one small brown trout as my reward for perseverance.

At 12:30 I found myself below a very high bank that was recently excavated during the reconstruction of US 34, and a SUV with a rod vault was parked along the shoulder of the highway. I never saw another fisherman, but given my lack of action I surmised that perhaps a fisherman or two disrupted the water ahead of me. I decided to pursue a fresh beginning, and I returned to the car and then drove east for another three miles, until I was just above the downstream border of the catch and release section.

I crossed the highway and found a welcoming rock and paused to eat my lunch, while I observed the water. The river in this area consisted of huge exposed boulders with deep pools and pockets interspersed with fast rapids and chutes. Very little vegetation was present, as the the flood of 2013 scoured everything in its path.

After lunch I began to prospect a nice deep run along the opposite bank, and on the second cast a very nice trout rose and smashed the hippy stomper. I quickly lifted my rod to set the hook, and a rainbow surfaced, splashed and quickly ended our brief association. After the slow frustrating morning I was very disappointed with this turn of events, but I was at least encouraged to attract attention from a respectable fish. I reeled up my line, and I was disgusted to note a curled end of my leader. All three flies were lost, as the line broke at the knot that held the hippy stomper. I was relieved to remember that I tied five new peacock body hippy stompers on Sunday night, but I now faced the task of re-configuring my line.

I extended my tapered leader with a section of 5X and then attached my one remaining carryover hippy stomper. Below the foam attractor I added a beadhead hares ear and sparkle wing RS2, and I was quickly back in business. 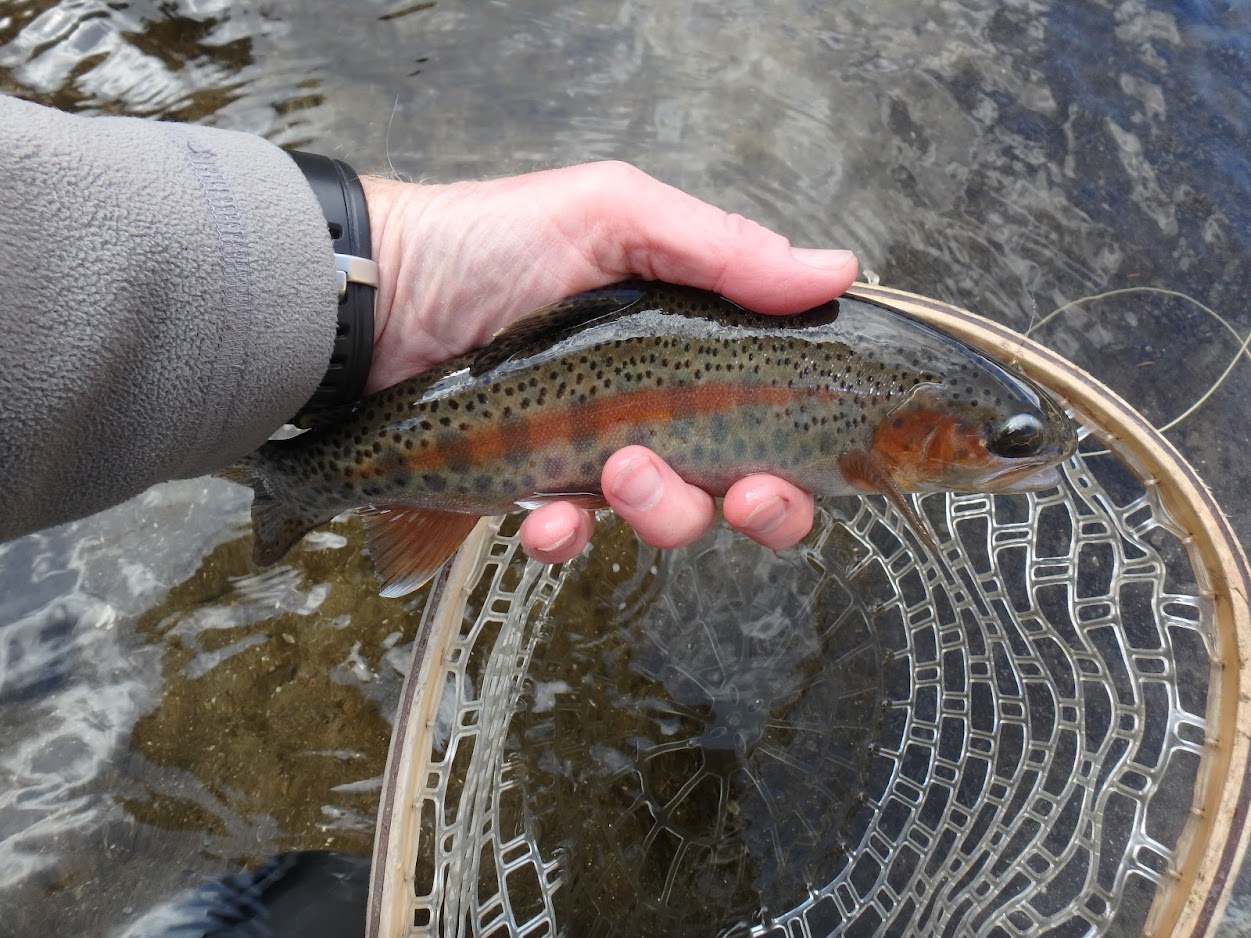 First Decent Fish on the Day

Another juicy pool presented itself above the scene of the unfortunate separation, and I tossed the three flies into the sweet spot. Almost immediately a fish attacked the hares ear, and I quickly stripped in a five inch rainbow trout. The second cast resulted in a similar response, but on the third drift a ten inch rainbow crushed the peacock stomper. The contrast between this downstream section and the area that I visited in the first hour was dramatic.

I released the rainbow and continued to lob casts to the center of the quality pool, and I connected with another six sub-catchable rainbow trout. What was going on here? I moved on and continued the upstream progress, and the sequence of events that I described in the previous paragraph persisted for the remainder of my time on the river. I managed to elevate the fish count from two to seven. All of the counted fish except for the first were rainbow trout, and three were very nice brightly colored pink striped fighters in the twelve to thirteen inch range. The rest were very small bows barely over my six inch minimum standard for counting. 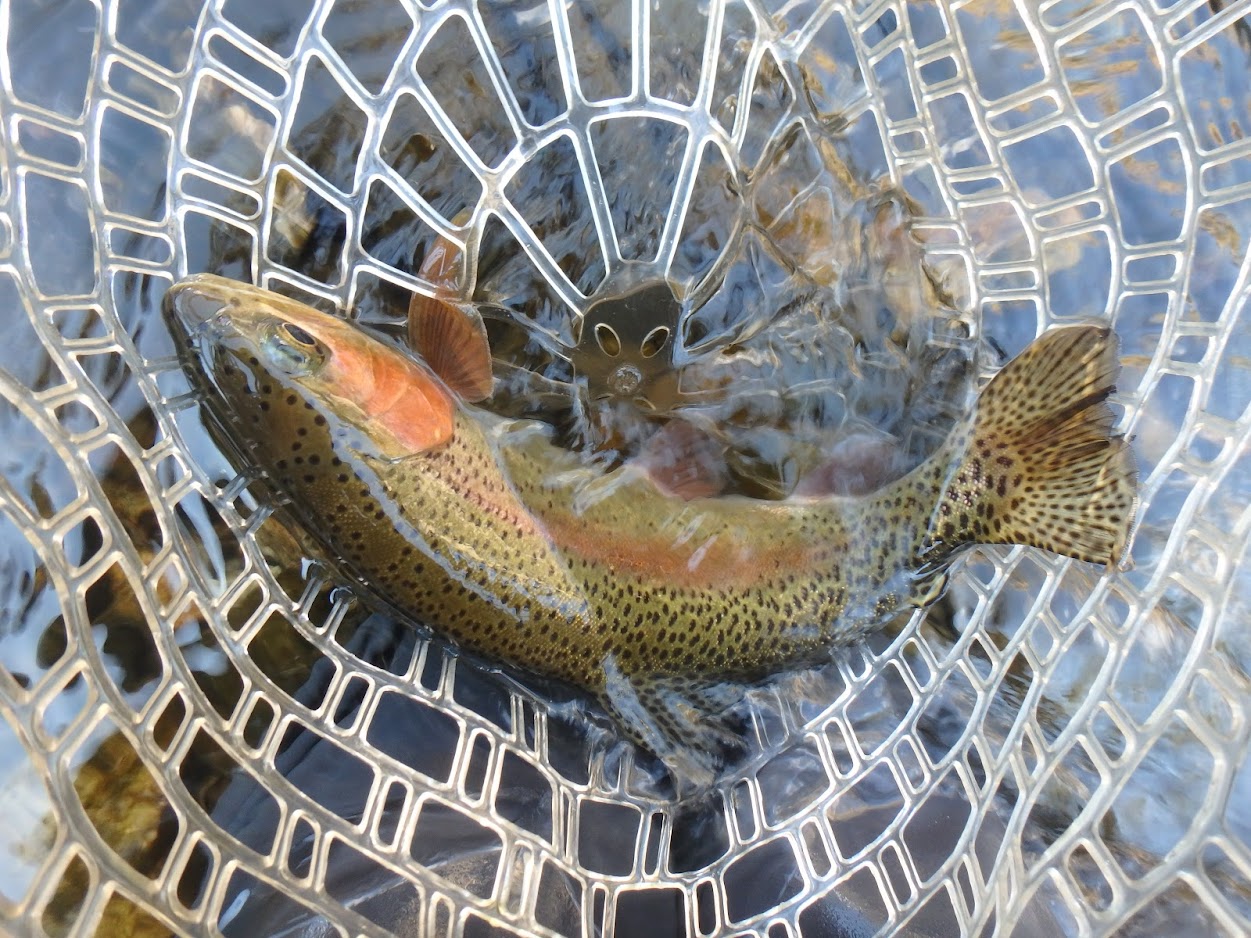 This account of my day on Monday, October 22 would be incomplete, if I failed to mention the other thirty fish that attacked my flies. They were all rainbow trout in the three to five inch size range. They were actually a persistent nuisance, as they consumed time to release, and in several cases they created moderate line tangles. At least another twenty tiny trout grabbed my flies temporarily, but with my approval they fell off before I was forced to release them.

I concluded that the Department of Wildlife stocked sub-catchable rainbows in the areas where CDOT made emergency repairs to the highway. Five years after the flood the road construction work was completed, and as promised,  stream improvements were finished. I am guessing that efforts to repopulate the river with rainbow trout are in progress. These are merely my own personal assumptions, and I have not read about any DOW population enhancement projects. 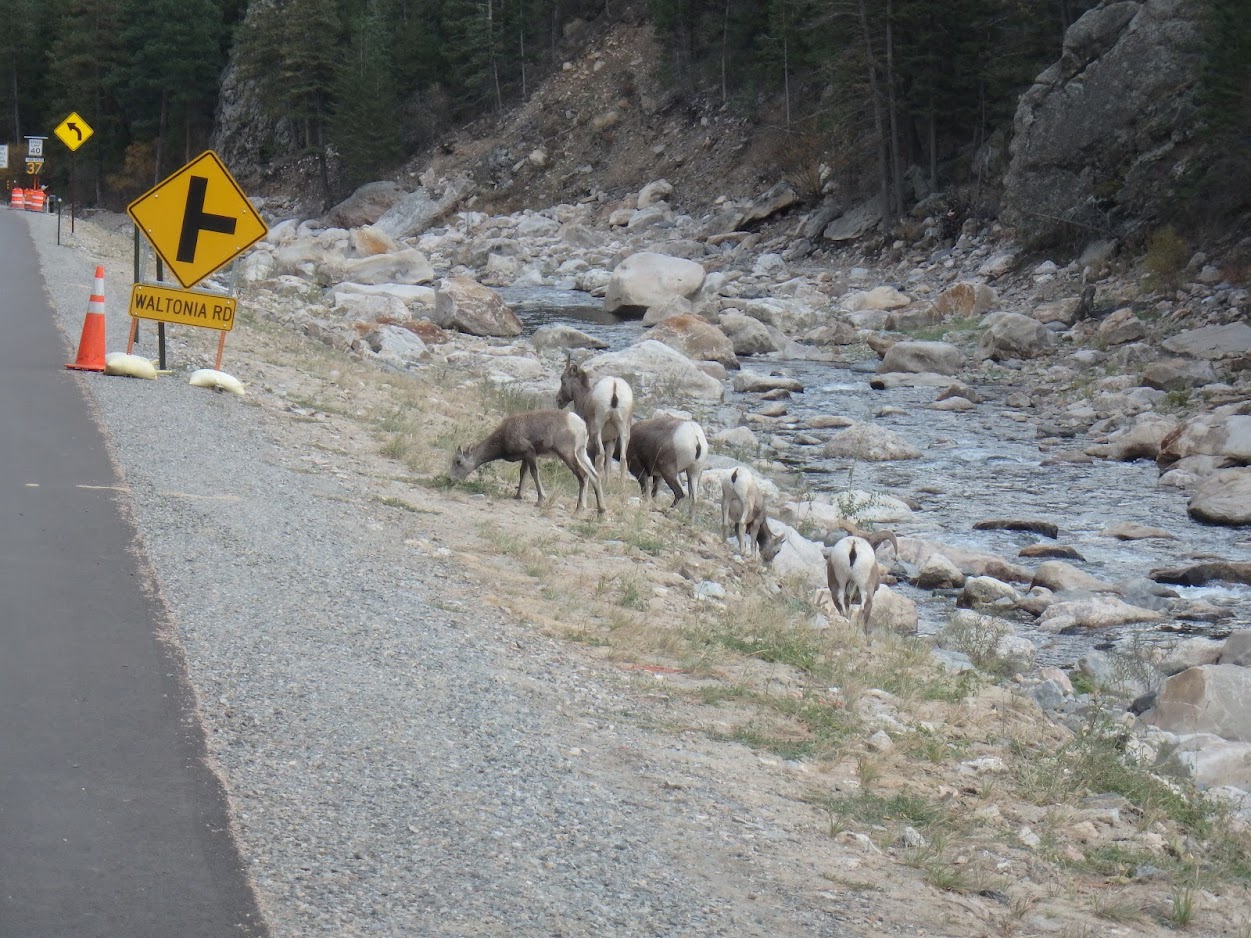 The Entire Flock of Five

At any rate Monday was a somewhat frustrating day. I managed to land seven trout including three very nice feisty rainbows. The weather was delightful for October 22, and I encountered a small herd of bighorn sheep, when they crossed the highway and approached the river for cold refreshing drinks. Dealing with the ongoing nuisance of handling and releasing countless small trout was an unforeseen negative to my day on the Big Thompson River.