Location: Upstream from the handicapped platform in the special regulation water below the dam

Am I addicted to exploring new streams and rivers never before experienced? Can I still derive enjoyment from returning to an old favorite that offers familiarity but minus the excitement of sampling new stretches? 2020 has been a season of discovery, but on Thursday, October 2, I decided to return to the recognizable confines of the Big Thompson River below Estes Dam. This was my first visit to the relatively nearby front range stream since last year, as the flows were maintained in the plus 200 CFS range for much of the summer, and I am reluctant to fish the narrow canyon stream at levels above 130 CFS. When I checked the flows on Wednesday evening, the chart revealed 71 CFS, and this was well within my desired range. However, I checked the graph again this morning while composing this blog, and I was surprised to learn that, while I was present, the water managers increased releases to 85 CFS. In fact today the graph depicts a spike to 121 CFS. Clearly the Big Thompson is experiencing abnormal variability, and historically I learned that trout are not a fan of large changes and require some time to acclimate. I read my blog post from from October 3, 2019 on Wednesday evening to gain an understanding of what flies typically produce in early October, and this reminded me of a very scary fall. I admonished myself to be extra cautious and hoped not to repeat that incident.

I arrived at my chosen destination by 10:40AM, and I assembled my Sage four weight and prepared to fish. The air temperature was 64 degrees, so I elected to forego an extra layer. Dense smoke from the Cameron Peak fire filled the canyon air space, and this layer of atmospheric pollution shielded the sun for much of my time on the water. The bright thick haze added an eerie aura to the experience. By 11:00AM I quickly crossed the busy highway and strode along the south shoulder for a short distance, before I dropped to the edge of the water. I began my search for canyon trout with a tan ice dub chubby Chernobyl, salvation nymph and sparkle wing RS2. The fly shop reports suggested that I could expect blue winged olives, so I was prepared for active subsurface baetis nymphs. In the hour before lunch I managed to land two small trout, one rainbow and one brown, on the RS2. The predominant action, however, consisted of splashy refusals to the hopper. 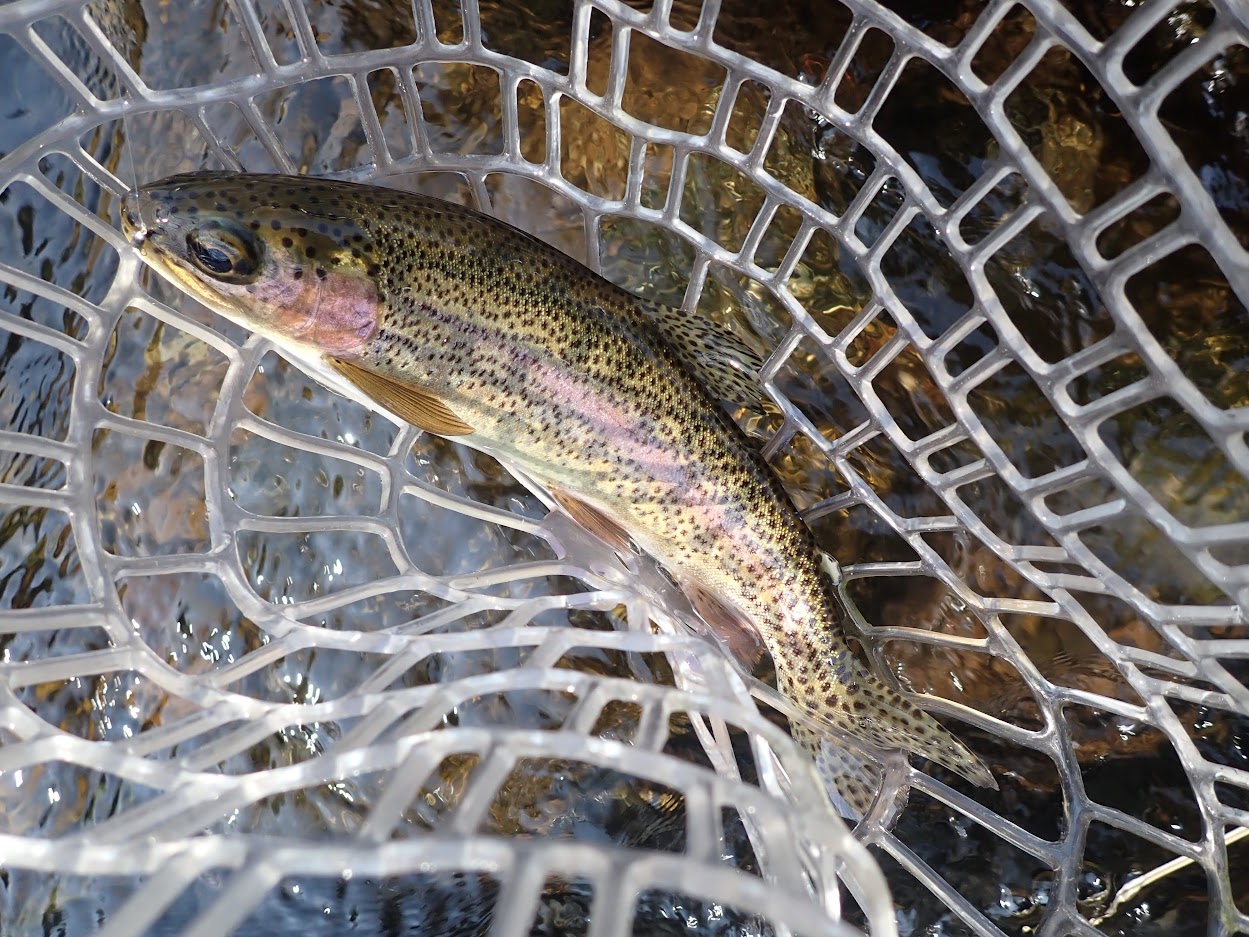 Number One on Friday

After lunch I implemented a switch to an olive stimulator, and this fly also attracted attention in the form of short strikes, although I did record a temporary hook up with a small brown trout. The stimulator was difficult to see in an upcoming stretch of fast pocket water, so I reverted to a dry/dropper method, but in this instance I substituted a tan pool toy hopper for the chubby Chernobyl, and I replaced the salvation nymph with a 20 incher to create more depth on my drifts. The modified approach was a certifiable failure, as I fished for quite a distance with only a few refusals to the pool toy to report. 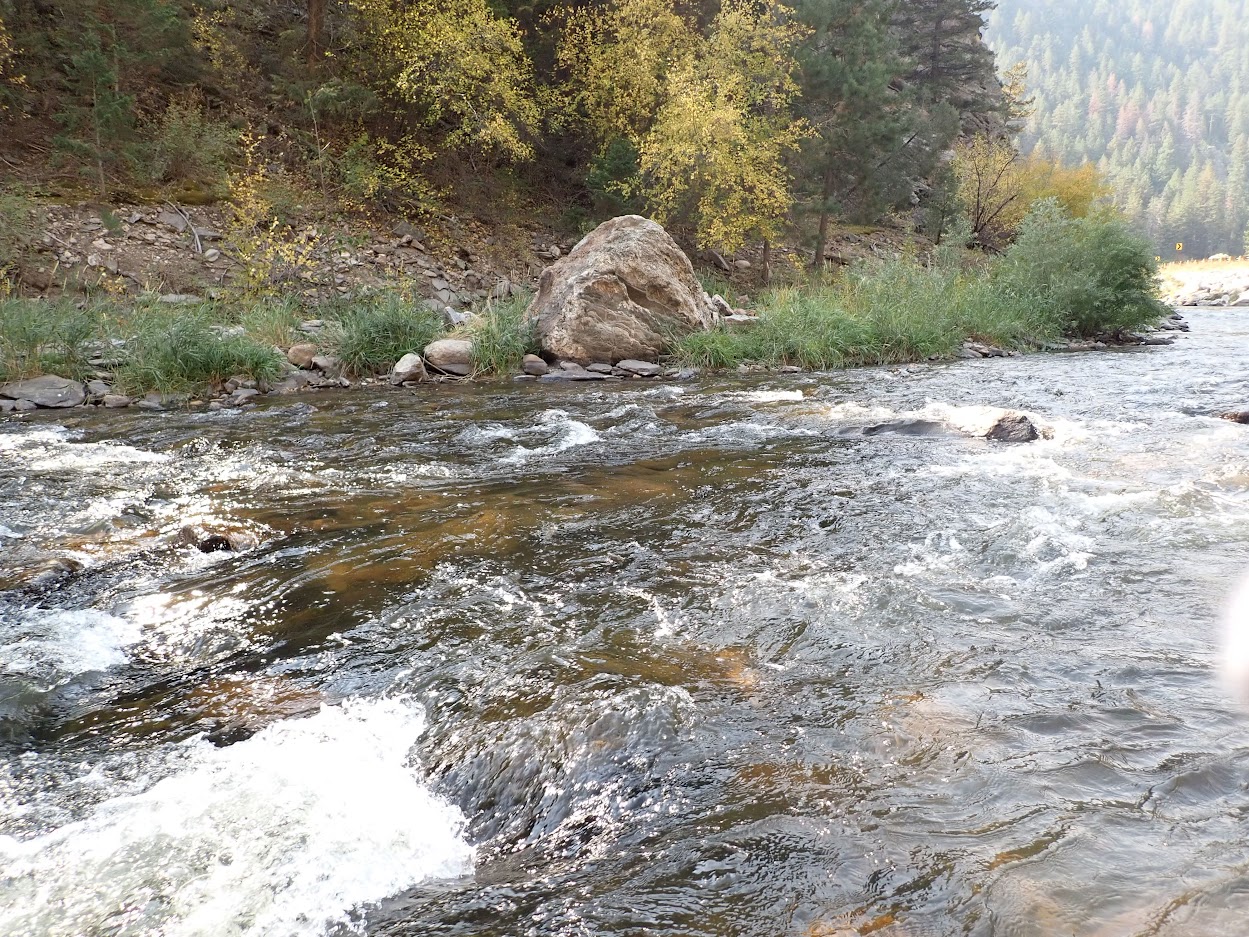 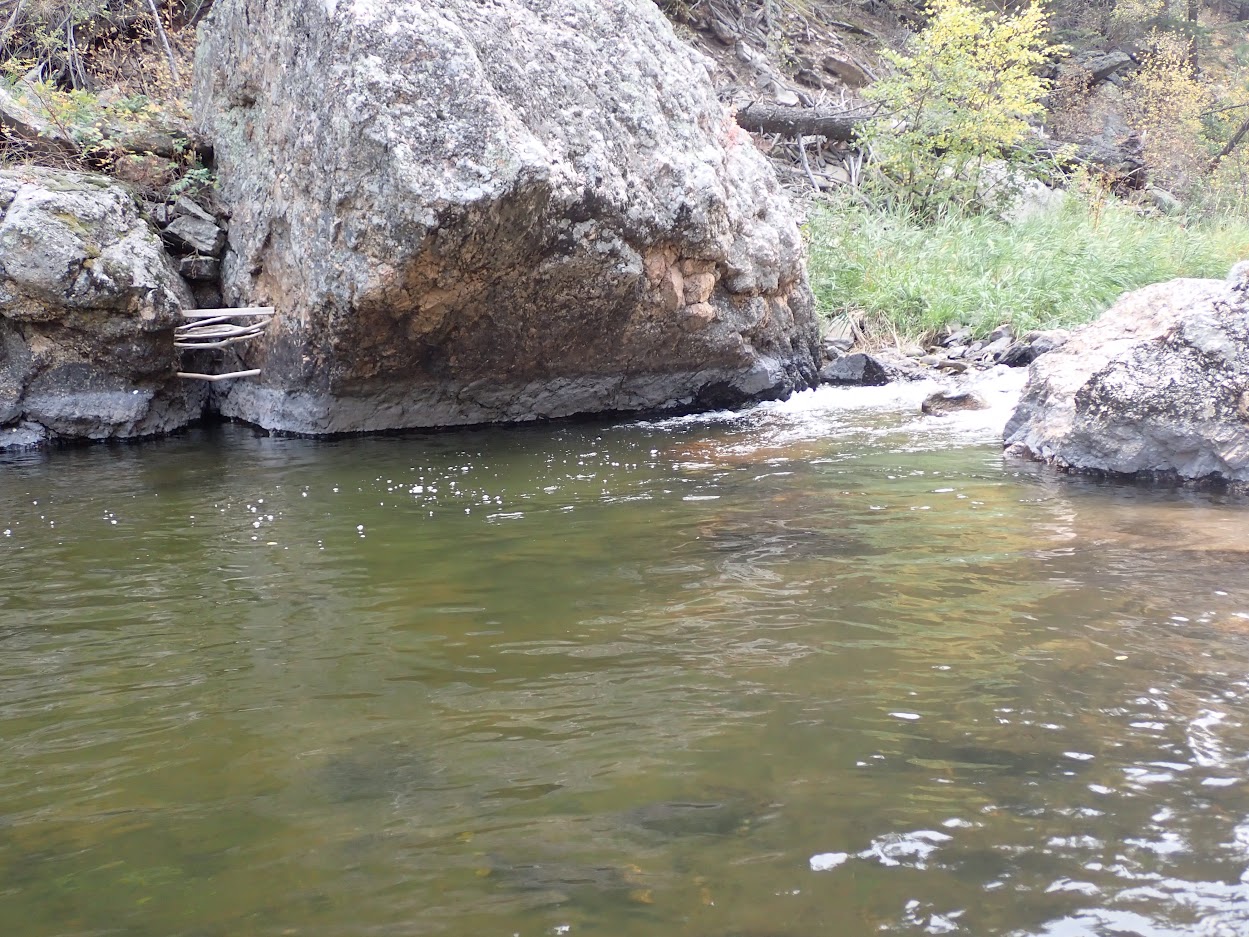 I was resigned to a two fish day, when I approached a gorgeous moderate depth run at 2:00PM. Two fish inspected the hopper, but then returned to their holding position, and given my lack of success, I decided to experiment with different flies. I removed the dry/dropper set up and replaced it with a peacock hippie stomper, and this provoked more refusals. I added a Jake’s gulp beetle behind the stomper, and the fish yawned, if in fact fish are able to yawn. I removed the hippie stomper and tested an olive-brown deer hair caddis, and once again the trout across from me expressed their displeasure with annoying refusals. I finally decided to abandon the quality riffle and moved on to the next pool. 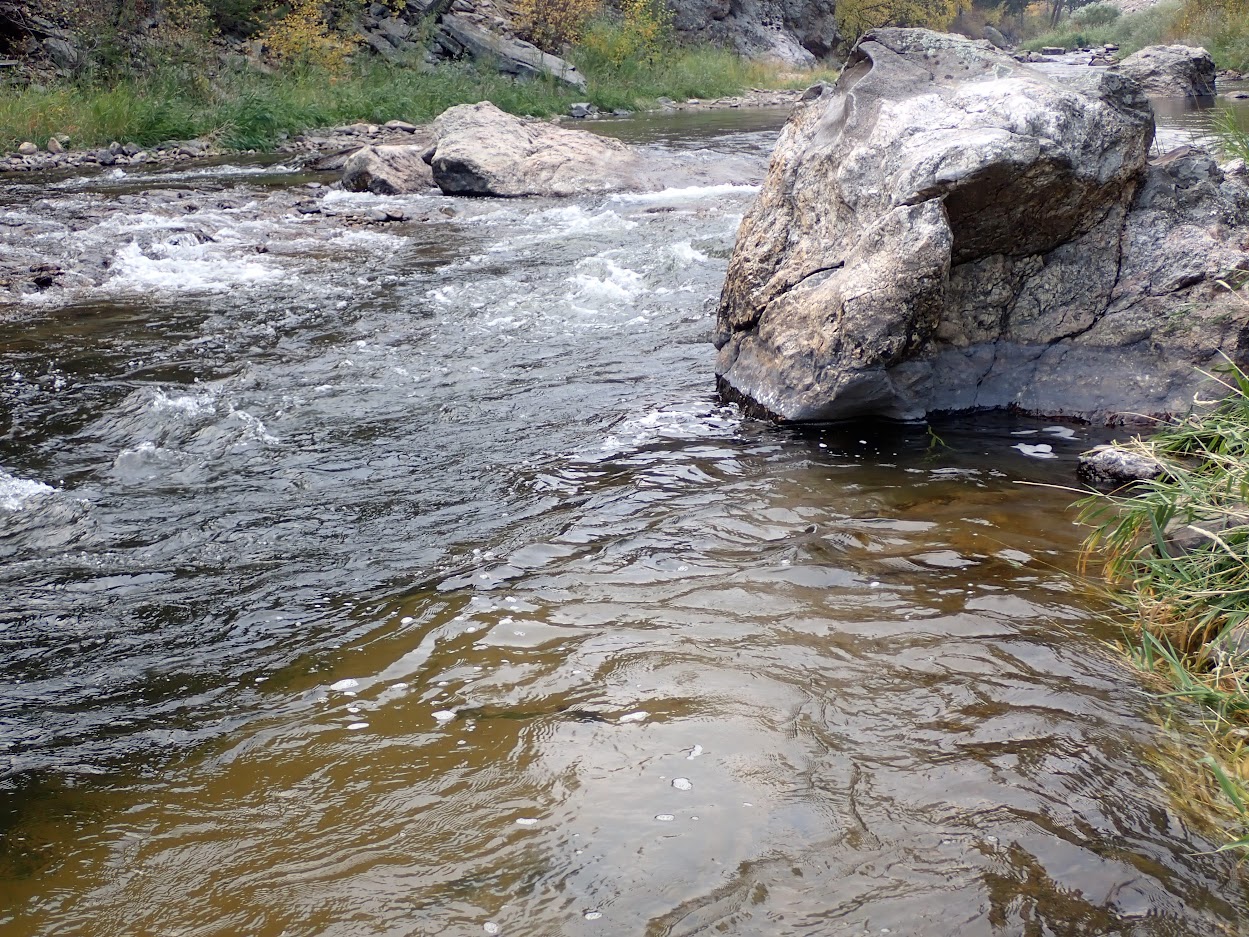 Scene of a Temporary Hook Up 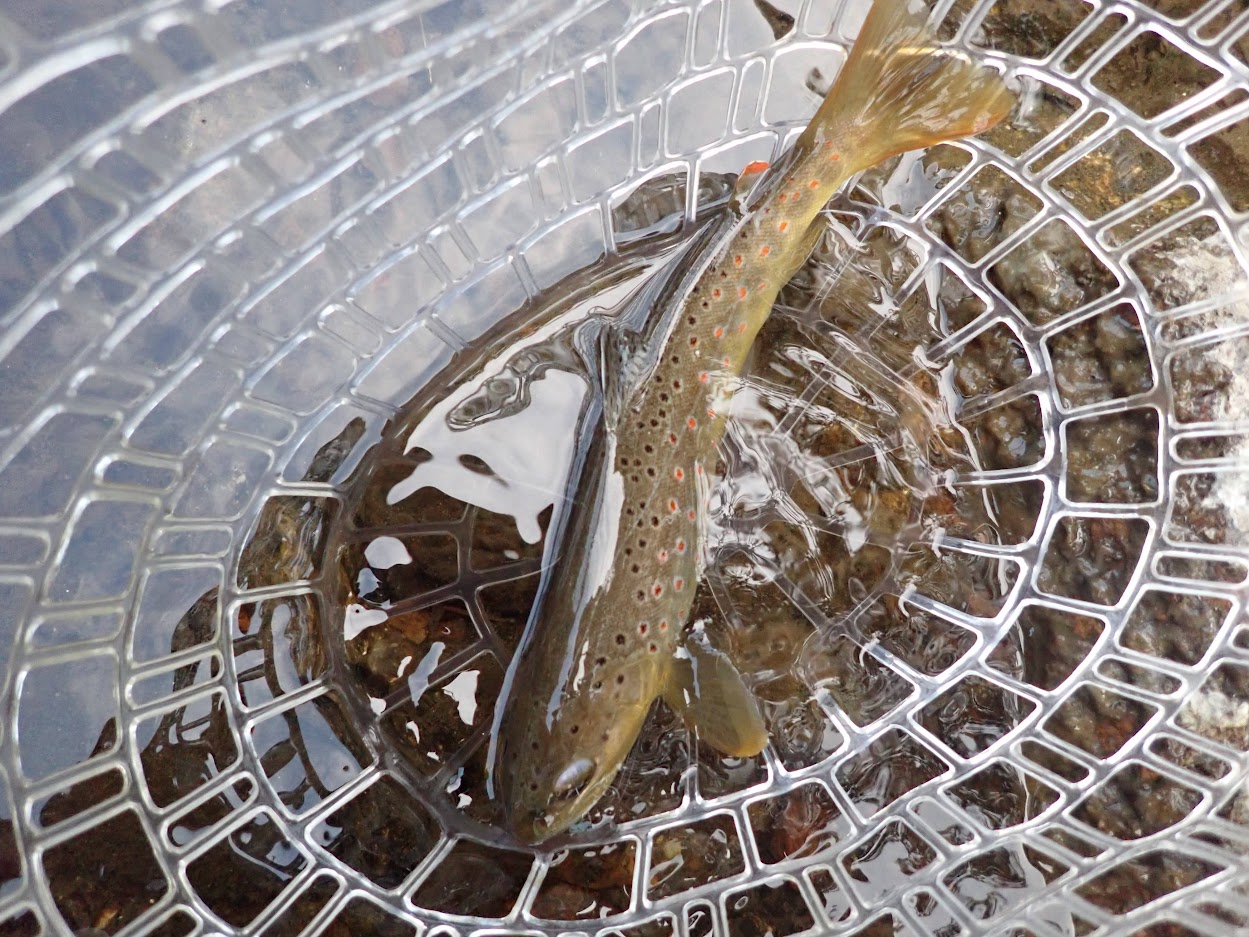 My confidence was quite low at this point, so I decided to simply pause and observe the smooth pool before going into fish combat mode. A few random rises attracted my attention, and a solitary blue winged olive in the air above the water convinced me to switch to a baetis dry fly. I knotted a Klnkhammer style BWO to my line and flicked several casts to the areas, where I observed the riseforms, but the emerger failed to generate interest. Perhaps the size 20 Klinkhammer version was too large? I plucked a size 22 CDC BWO from my fly box and crossed my fingers. Finally! Within the next hour I landed four small brown trout in the nine to ten inch range on the tiny fluff of a fly. The hatch was fairly sparse, but it revealed enough feeding trout for me to target in order to somewhat salvage my day. The relatively steady rising activity lasted for only thirty minutes, and then I migrated to the next quality pool that was upstream. 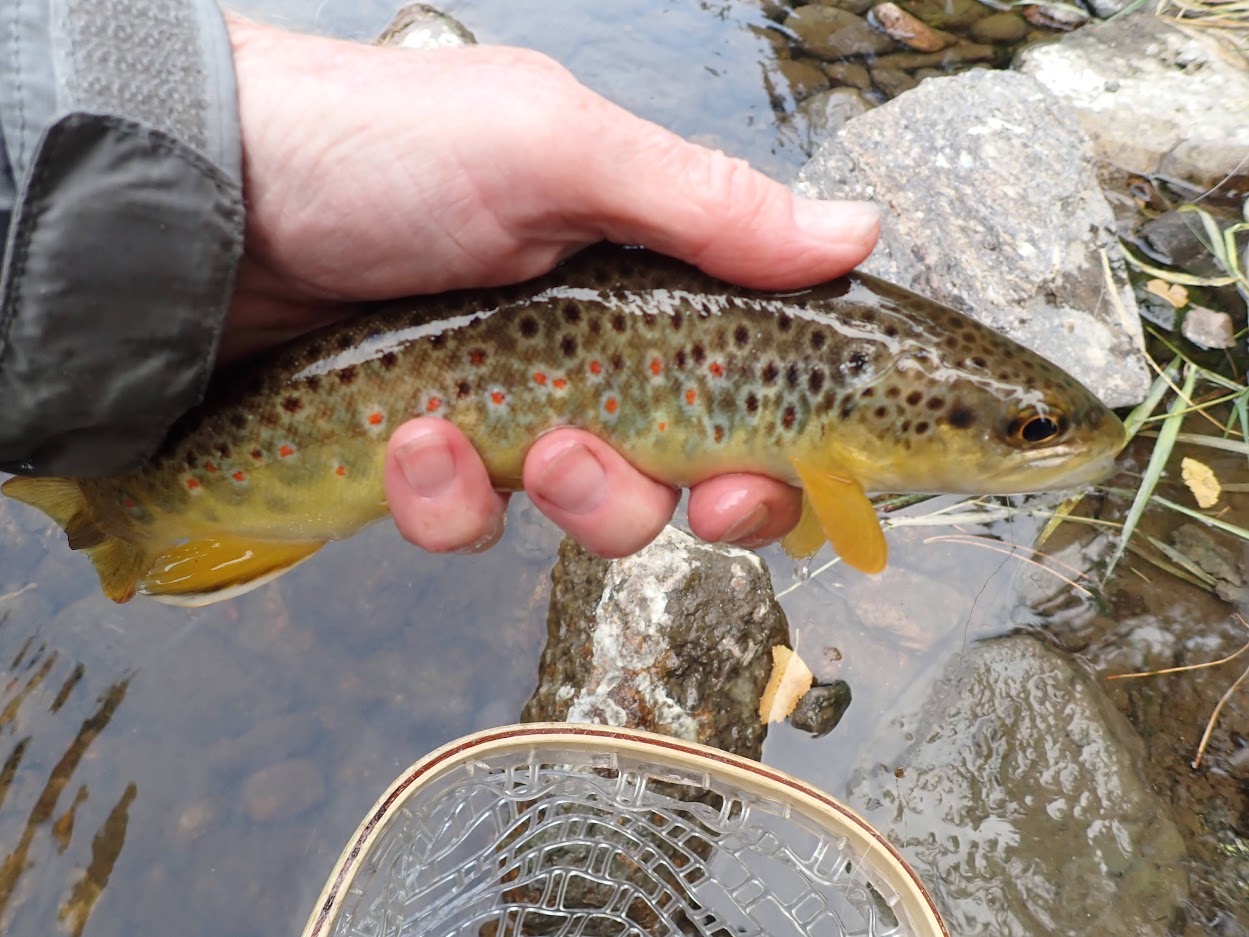 This pool offered a couple very sporadic rises on stragglers, but I was unable to interest these picky feeders in my previously effective CDC blue winged olive. After fifteen minutes of fruitless casting, I debated trying an ant or beetle, but my watch displayed 3:30PM, and I was tired and concerned about constantly breathing smoke filled air, so I retreated to the Santa Fe and called it a day.

Thursday continued the trend of disappointing days on the Big Thompson River over the last several years. I avoided injury, but that’s a fairly low bar for success. Two small fish in four hours of fishing is rather futile, with thirty minutes of fun during the hatch allowing me to elevate the rating from failure to worse than average. Now that I saw the DWR graph, I am inclined to attribute some of the poor fishing to the sudden changes in flows. In this case returning to familiar territory was not a recipe for success.