Location: Began .2 mile below the first bridge after Noel’s Draw and fished back up until I was nearly at Noel’s Draw

I was a bit disappointed with my outing on Tuesday afternoon mainly because I felt that I should have landed more fish in conjunction with the distance I covered. I sought redemption by planning a day trip to South Boulder Creek, since the flows there were 132 cfs. Generally I desire South Boulder Creek to be in the 80 cfs range, so 132 cfs was a bit high, but I have experienced success at 180 cfs. Given the relatively low conditions on most Front Range streams, I actually looked forward to flows that were a bit higher.

On Wednesday morning I packed the car, but before I departed, I decided to make a final check of the stream flows. Denver Water is notorious for making sudden changes, and that is exactly what I discovered as I opened the DWR website. South Boulder Creek below Gross Reservoir was rushing down the canyon at 175 cfs. I was game for 132 cfs, but I was not in the mood for the spring-like conditions that would accompany 175 cfs, so I made a last minute adjustment and headed to the Big Thompson Canyon below Lake Estes.

I arrived at the wide pullout just above the first bridge after passing Noel’s Draw by 10:00AM, and by the time I donned my waders and rigged my Orvis Access four weight and stepped in the water, it was 10:30. The air temperature was 57 degrees and some large gray clouds covered the sky so I pulled on a fleece. I walked across the bridge and then strode along the shoulder until I was .2 mile farther downstream. I read some posts from 2012 when I fished the Big Thompson at the same time of the year, and I learned that a Chernobyl ant, beadhead hares ear, and salvation nymph were effective, so I tied on a Chernobyl and salvation and began prospecting the relatively low clear flows of 36 cfs. 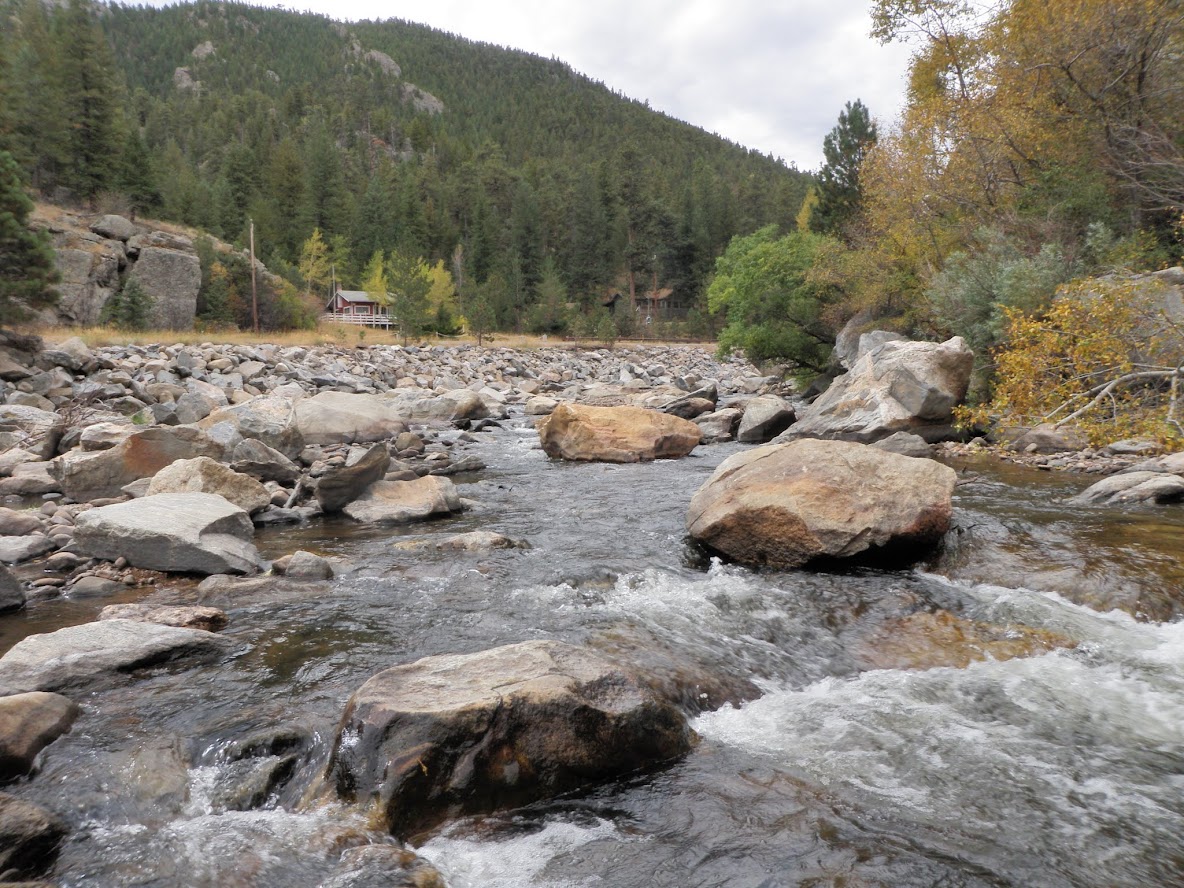 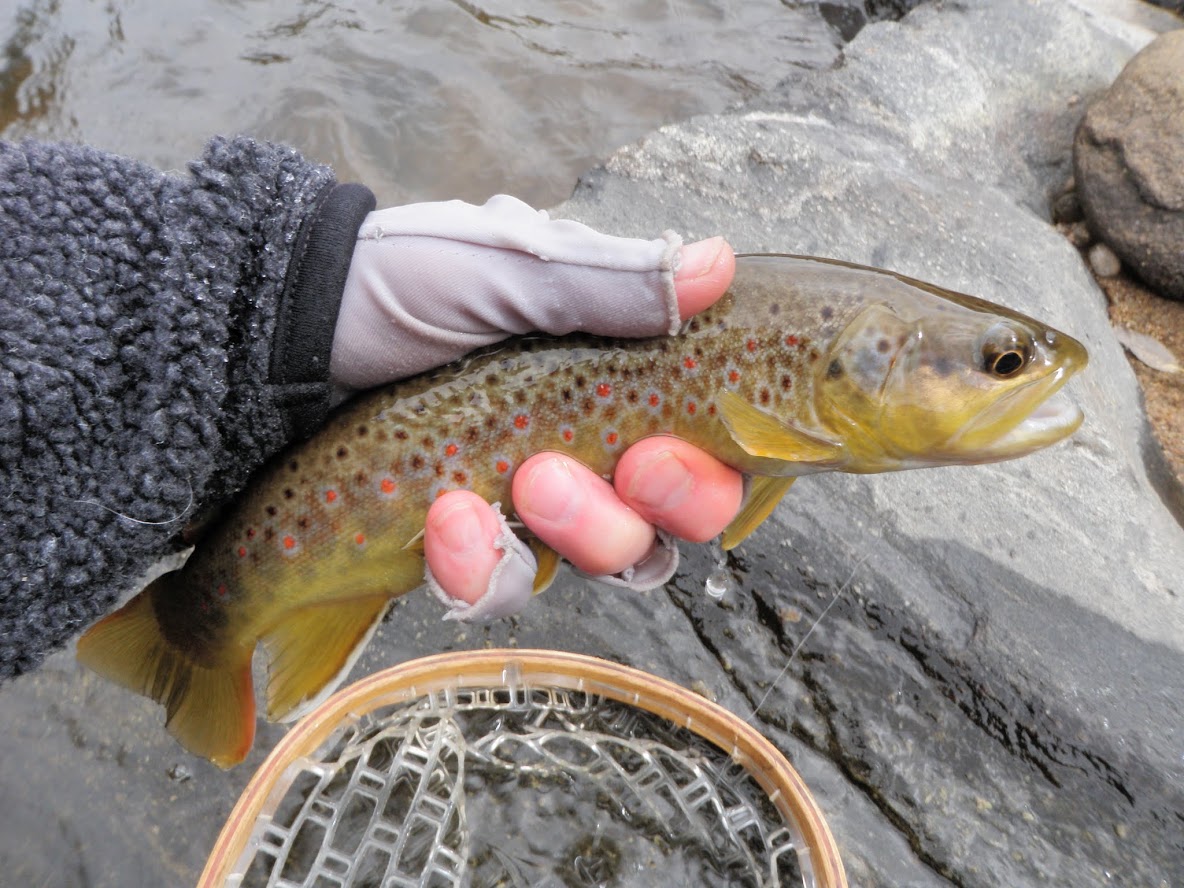 First Catch of the Day

At these levels quite a few large boulders were exposed, but sufficient water remained to create some nice deep holes and pockets. It was not long before a pair of brown trout smashed the Chernobyl ant, and then a smaller cousin nabbed the salvation nymph in the swirling water behind a protruding rock. I was quite pleased with my early success, as I continued working my way upstream through the boulder field. Another small brown slurped the Chernobyl, and I was brimming with confidence. At this point, however, adversity decided to make an appearance. The Chernobyl became an object to observe rather than a tasty morsel. 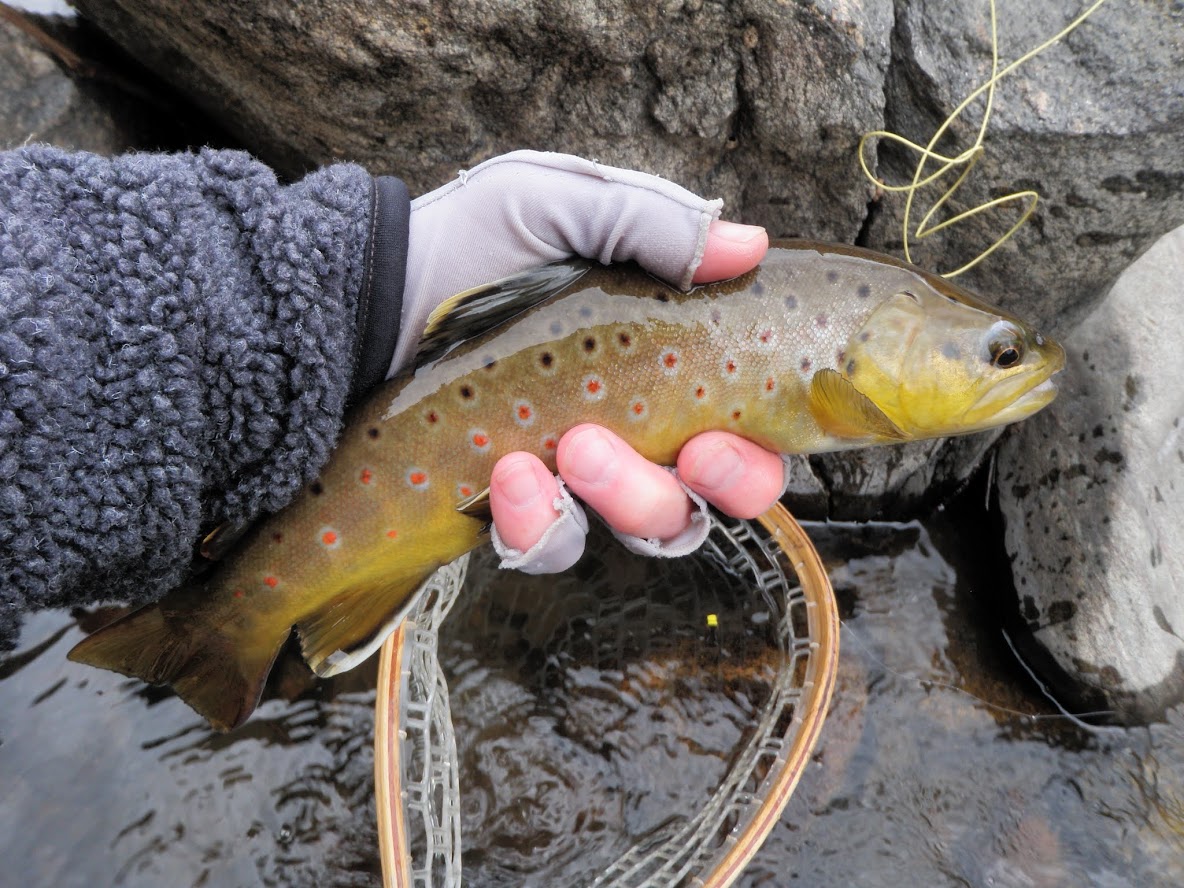 I concluded that the local trout were interested in terrestrials, but the Chernobyl was outside their size range, so I knotted a Jake’s gulp beetle to my line and began to plop it in likely locations. Almost immediately a ten inch rainbow reacted to the splash down in front of a boulder, and I was optimistic about my fly choice. For the remainder of the morning I landed three additional Big Thompson trout on Jake’s beetle, and then I broke for lunch. I advanced my fish count to eight by noon, and I was pleased to find a productive fly. I was concerned that my best fly was the one on my line, and I possessed no back up should it unravel or get lost on a tree branch. 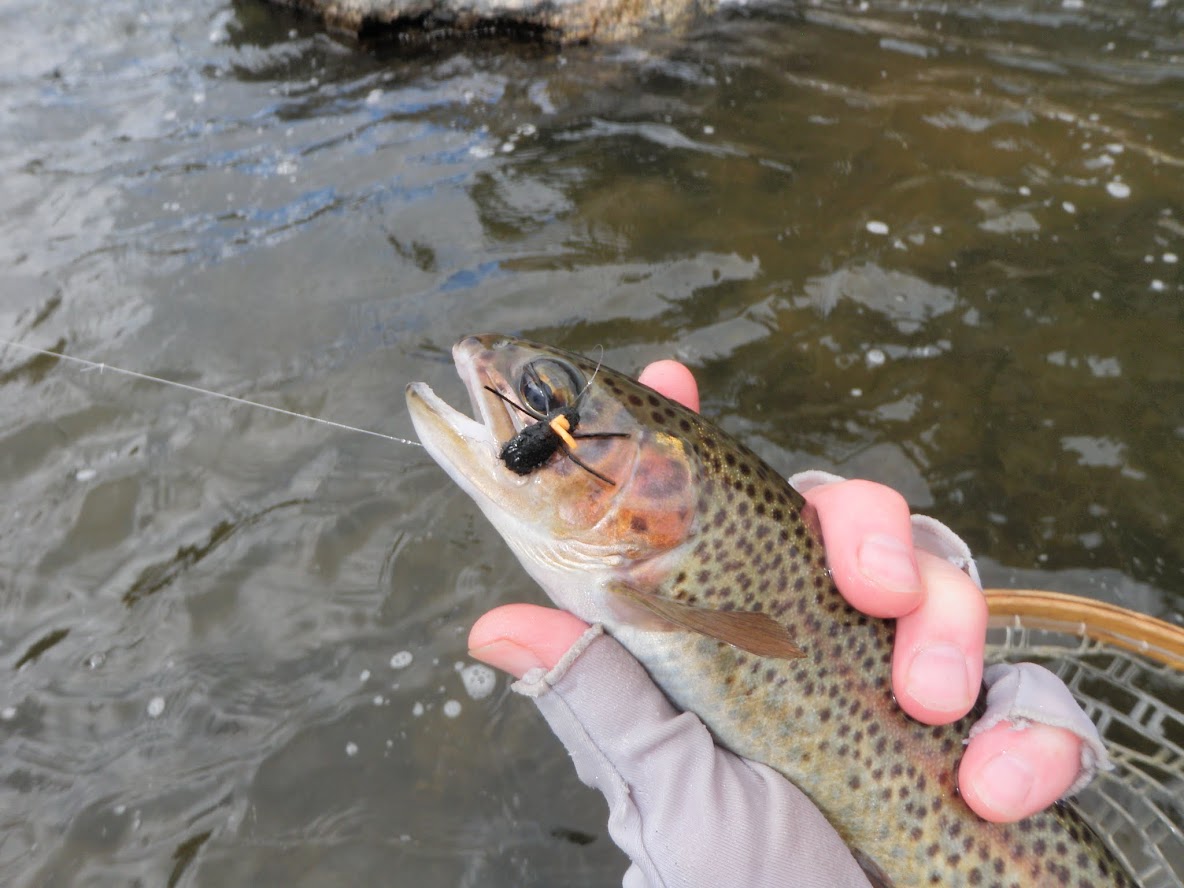 After lunch I resumed my progress upstream toward the bridge, but suddenly the beetle began to provoke refusals as well. I paused to consider my options and spied a few small mayflies fluttering above the stream. Given the overcast conditions, I expected blue winged olives, so I elected to revert to a Chernobyl ant, salvation nymph and beadhead RS2. These flies remained on my line as I fished up to and under the bridge, but they only produced one brown trout that nabbed the RS2 as it began to swing. The long dry spell convinced me that the trio of flies on my line was not what the fish were looking for, so I decided to perform another conversion. The thick clouds and heavy overcast indicated fast action, but I was missing out. 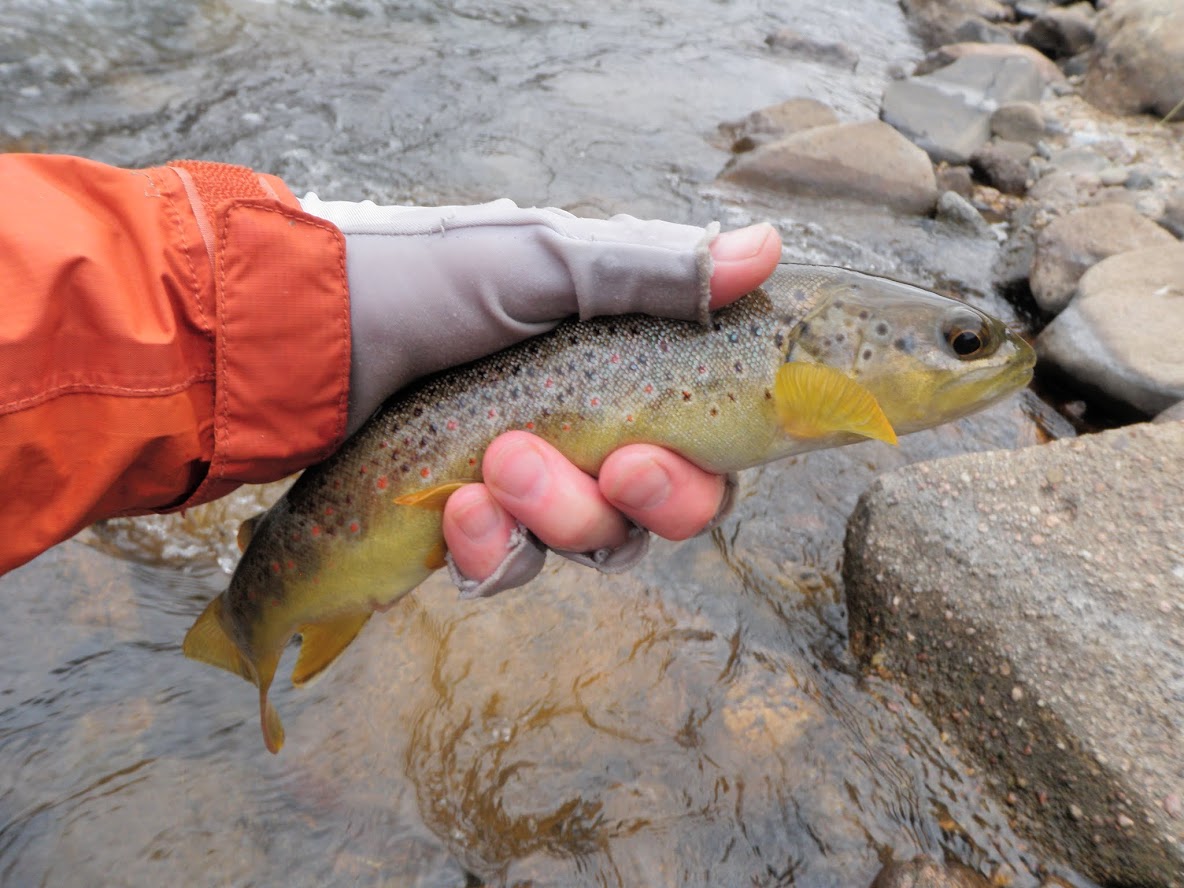 Jake’s gulp beetle delivered four fish in a short amount of time in the late morning, so I decided to return to that mode of attack. Quickly my fish count surged from nine to thirteen as I approached a nice long deep pool with a fast run along the upper third. Fish began to rise on both sides of the faster current, and they ignored my heretofore popular beetle. I took the plunge and clipped off the beetle and knotted a size 20 CDC blue winged olive to my leader. I shot a long cast half way up the pool on the left side of the center current, and I spotted a sip and reacted with a hook set and stripped in a feisty ten inch brown trout. Other fish continued to rise, but my CDC olive became radioactive, and the fussy residents of the stream avoided it.

I decided to abandon the picky eaters and moved on to faster pocket water. The tiny dry fly was not appropriate for this type of water, so I returned the beetle to my line and added a size 20 blue winged olive soft hackle emerger on a  2.5 foot dropper. This change proved to be magic, and I moved the fish count meter from fourteen to twenty-six over the remainder of the afternoon. This time period was approximately 1:30 until 3:00, and it coincided with the heaviest concentration of blue winged olives, although I would still characterize the hatch as light. Apparently there were enough nymphs and emergers to turn the fish on to my soft hackle, as it began attract their attention. I estimate that roughly one-third of my catch during this time frame resulted from the beetle, and the rest stemmed from the emerger. 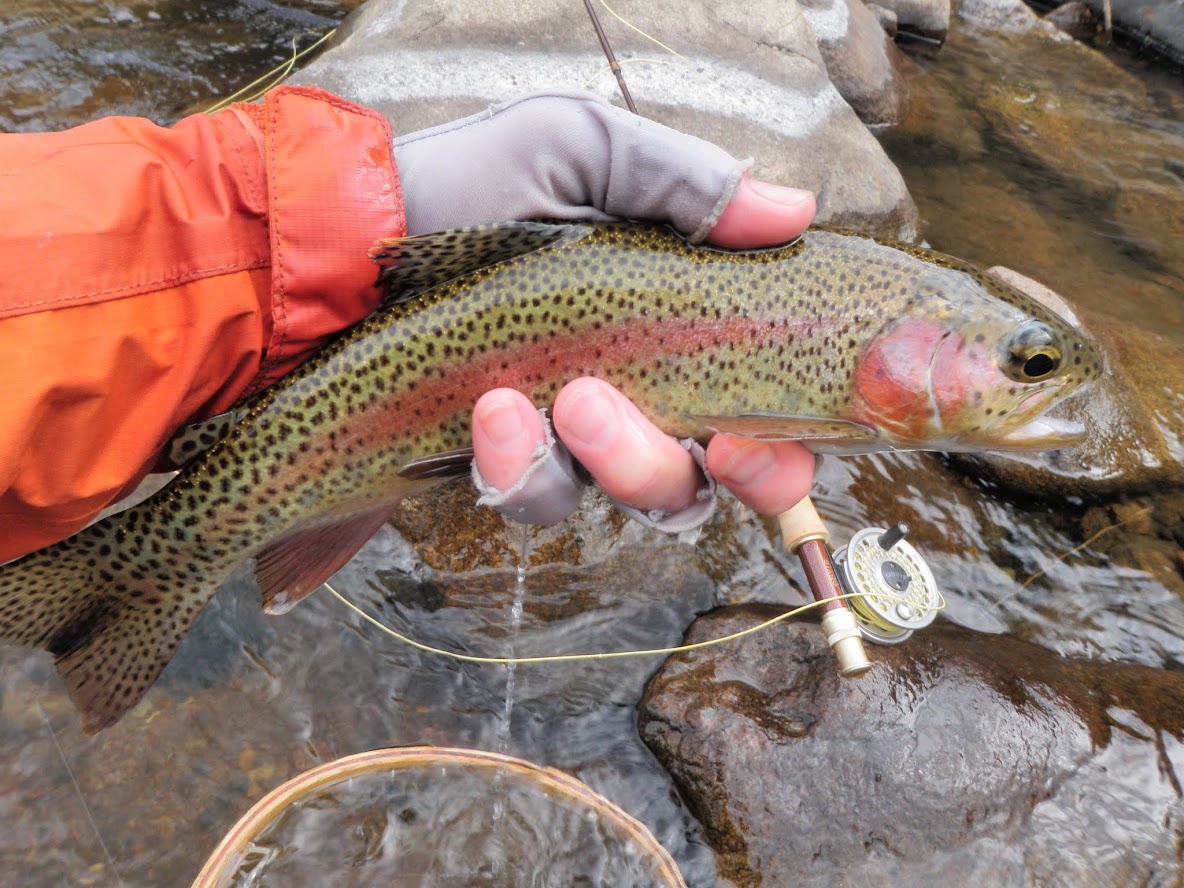 Gorgeous Colors on This Jewel

At three o’clock the response slowed measurably, so I substituted a salvation nymph for the soft hackle, and this move enabled me to add two more small fish to the daily count. By 3:30 I was twenty yards below Noel’s Draw, so I used this as an opportunity to cross to the road and returned to the Santa Fe.

Wednesday was a very productive day, as I landed twenty-eight trout. It did not seem like exceptionally hot fishing, but the action was relatively evenly spaced over my five hours on the stream. Most of the trout were in the 6-12 inch range with the vast majority nine and ten inch fish. I estimate that one-third were rainbow trout and the remainder were wild browns. Once I chose the gulp beetle and soft hackle combination, I settled into a nice rhythm and moved quickly from one likely spot to the next with short drifts and rapid casts. With this successful outing in the books I am anxious for my first fly fishing adventure of October. Stay tuned.