Location: From below first bridge after Noel’s Draw to above the next bridge above Noel’s Draw

Today’s fishing success vindicated the time expended authoring these fishing blog posts. Temperatures were forecast to be 75 degrees or higher so I decided to take a day off to go fishing. I didn’t want to make the long drive to the Arkansas River, so I checked the flows and reports on the Big Thompson River below Lake Estes. The flows had been ramped up to 116 cfs five days ago, but the reports on Kirk’s Fly Shop and St. Peters Fly Shop were both favorable so I elected to make this my destination. Knowing that I was headed to the Big Thompson, I pulled up all my blog posts on early season trips to the Big T. As I read them, I realized that the big producers in early April were the beadhead hares ear and beadhead pheasant tail.

I left the house at 8AM and arrived at the river between 9:30 and 10:00AM. The air temperature was around 50 degrees when I began fishing so I wore my fleece. I parked just before the first bridge after Noel’s Draw and hiked below the bridge to a wide pullout and began fishing upstream from there. Because the golden stonefly rubber legs had worked for me on the Arkansas, I tied one on as my top fly and then added a beadhead hares ear 18 inches below it. The flows were up a bit from what I consider ideal, but the river was clear, and I was able to fish mid-river spots and was not confined to fishing only the edges. Because it was early in the season and early in the morning, I decided to go deep with a strike indicator and two nymphs. The stonefly was weighted thus allowing me to avoid adding split shot. 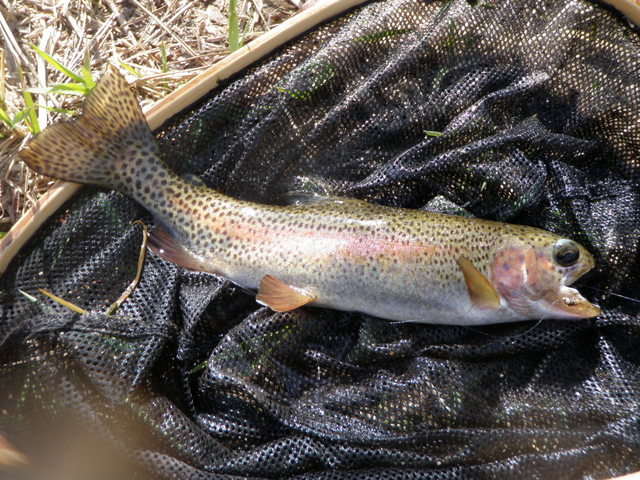 First Trout of the Day

After fishing upstream for 20 yards or so, I detected a slight pause and set the hook and landed a nice rainbow just downstream from the bridge. The first fish grabbed the beadhead hares ear nymph. I continued above the bridge in some juicy water with no luck and after covering quite a bit of water with no success, I decided to swap out the BHHE and replace with a beadhead emerald caddis pupa. I fished two nice pockets with this combination, but had no reaction from the fish, so I clipped off both flies and moved the BHHE to the top and added a beadhead RS2 as my point fly. Since these flies were not weighted, I added a split shot. 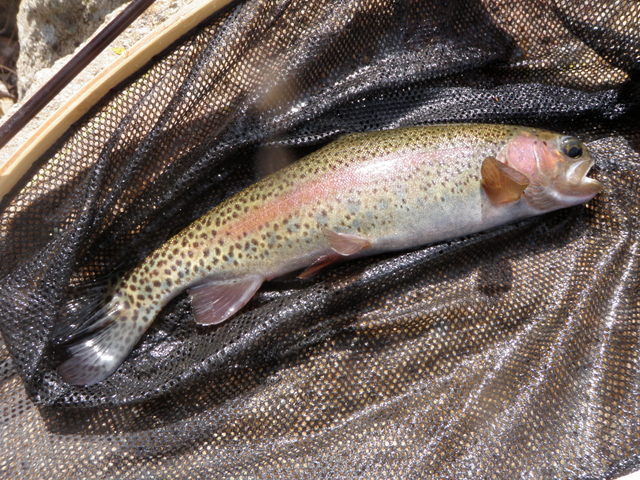 The fishing picked up at this point and I landed another six fish by noon as I worked upstream to the large bend with an island. As I surveyed the island I decided that I had to wade up the shallow left channel as the current was too fast and tight to the brush on the right side. As I approached the shallow pool, I spotted quite a few decent trout finning in the tail. I lobbed the indicator and nymphs to the mid-pool area, but this caused the fish to scatter. I moved up into the bottom part of the pool just vacated by four fish, and tossed another cast higher up next to an exposed boulder. This didn’t bring a response, and I recognized that I was not set up properly to fish this type of water, so I waded to the top of the island and crossed to the roadside bank and walked back to the car.

I ate my lunch just above the bridge and observed the water, but didn’t see much in the way of insect activity. There were a few tiny midges, but that was the extent of it. The sky was pure blue with only a few periodic sparse clouds, so it didn’t bode well for a BWO hatch. 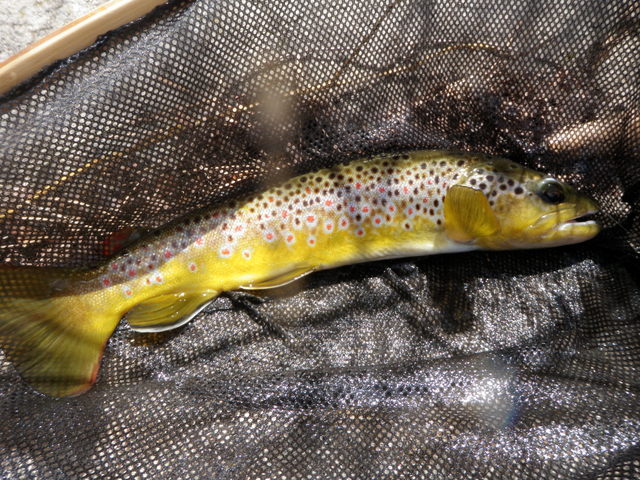 After lunch I returned to the top of the island and fished upstream along the left bank. I continued with the BHHE and RS2 and continued picking up fish at a fairly regular frequency. Nearly all the fish were falling for the BHHE, so after an hour or so of fishing, I exchanged the beadhead RS2 for a beadhead pheasant tail. I landed thirteen fish between lunch and 4PM and most took the BHHE; however, several nailed the pheasant tail and one of these was the largest fish of the day, a pretty, deeply colored brown. As I rolled to twenty fish I discovered a technique for fishing the smaller short pockets right along the bank. I lifted the indicator off the water and moved my rod at a pace equal to or slightly faster than the current. I probably landed three or four fish by using this style of fishing.

I actually spotted number twenty right next to me, and thought that the fish had seen me as well. But I flicked a cast five feet above the fish, and then led the fly back to the tail of the short pocket and as I lifted the flies the rainbow aggressively charged the accelerating fly and grabbed it. Of the twenty fish landed on the day, around four were browns, and the remaining sixteen were rainbows. 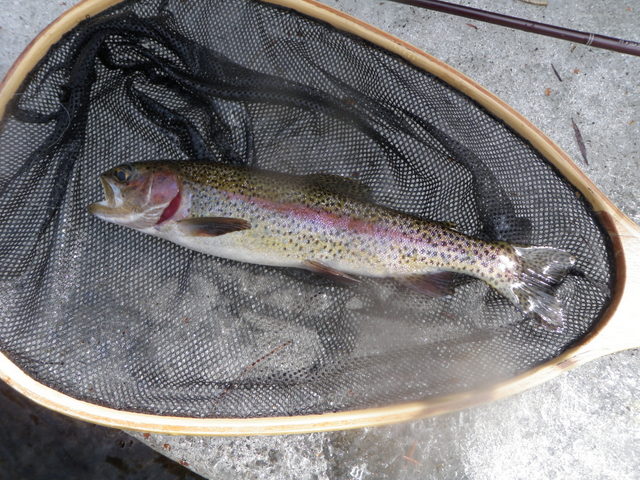 No. 18 Rainbow on Ice Shelf

The April 10 outing was largely an exercise in reading water, covering a lot of ground, and keeping the flies in the water. It wasn’t technical casting and hatch matching, although I did identify the technique described for short pockets that proved successful. The two flies that produced were the beadhead hares ear and beadhead pheasant tail. Had I listened to my blogs from prior experience, I would have started with the combination and caught even more fish.