Location: Below Lake Estes in the canyon

I chose the Big Thompson River on Monday because high winds were forecast for other potential destinations (as well as the Big Thompson), but the drive to Estes Park was shorter, and this translated to less time sacrificed, in the event that I was blown off the water. When I checked the flows on Sunday night, the Big Thompson chart displayed 83 cfs, and I knew from past experience that this level was very manageable. However when I arrived, the river seemed higher, and consequently I was never able to cross to the opposite bank due to the strong velocity. When I prepared my notes for this blog, I checked the flows again, and I discovered that my personal assessment was accurate. Flows elevated from 83 cfs to 111 cfs in the morning of April 30, before I made the drive. I never seem to do well when flows increase dramatically in a short window, and Monday maintained that trend. 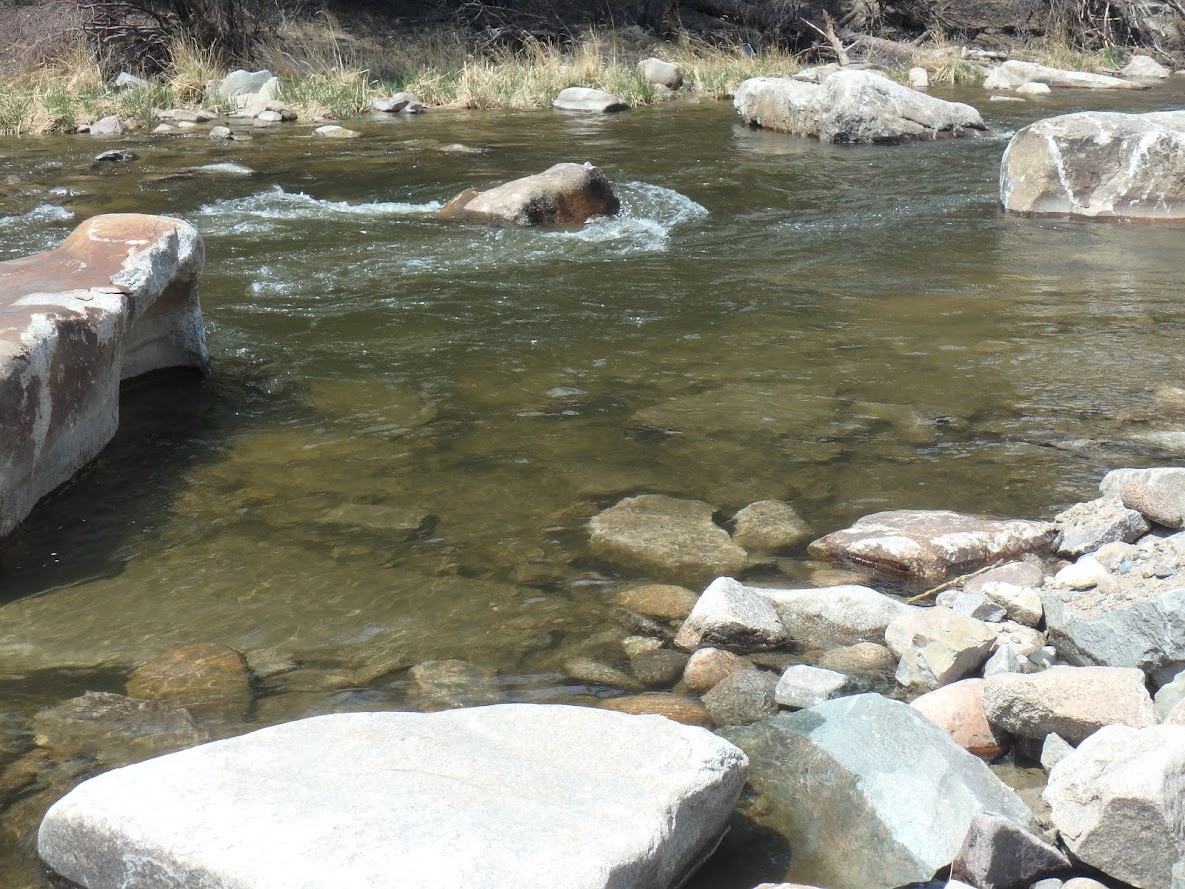 Although temperatures peaked in the upper seventies in Denver, I suspect they remained in the low to mid 60’s below Estes Park. The wind was tolerable, but intermittent gusts were a factor. Dense gray clouds blocked the sun much of the afternoon, and this atmospheric condition likely explained the lower temperatures in the northern Front Range. 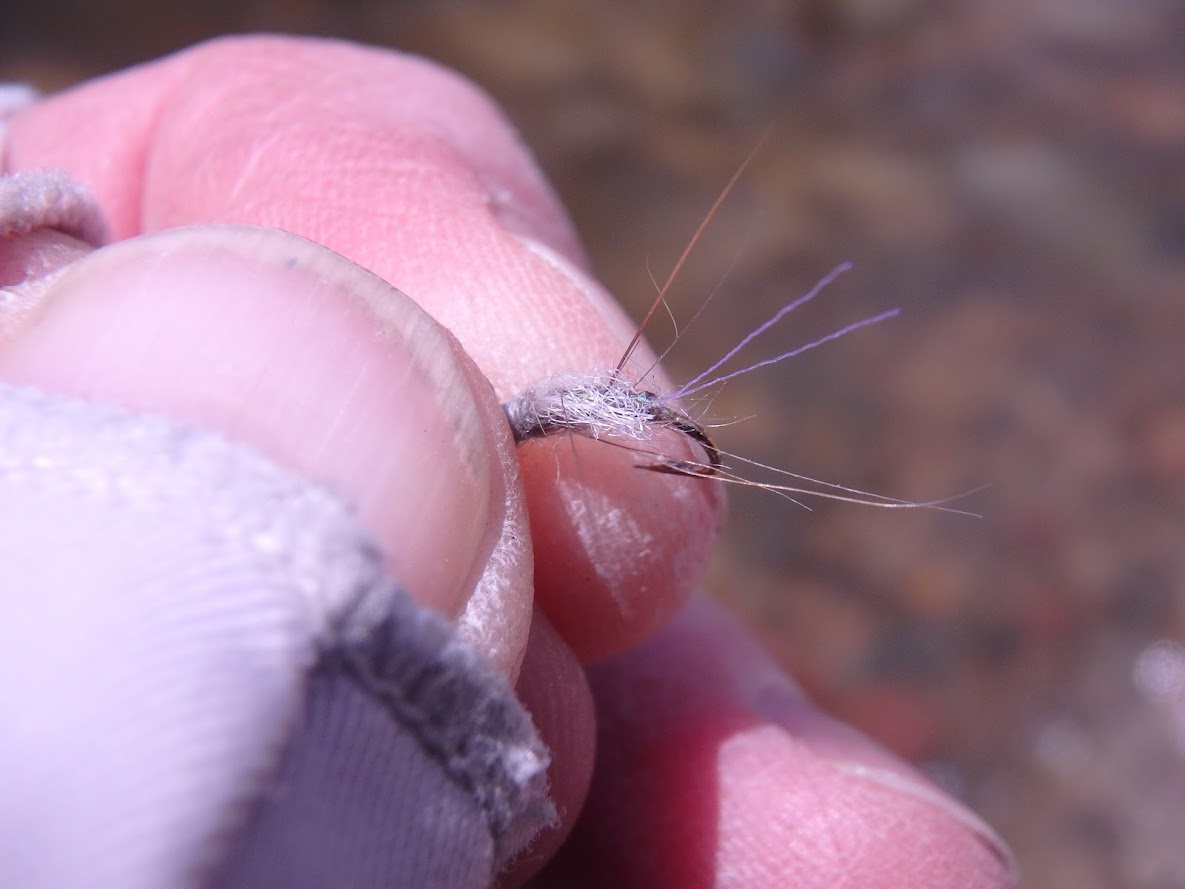 I fished at three different sections of the Big Thompson, with the first stop located two or three miles below the dam. Each succeeding location was farther downstream and within a mile of the first. I began fishing with a yellow fat Albert, beadhead hares ear, and a sparkle wing RS2 attached to my four weight line on my Sage nine foot rod. In the first forty-five minutes before I paused for lunch, I landed three trout that were barely over my six inch threshold to qualify for counting. Two were brown trout and one was a diminutive rainbow. I also witnessed two splashy refusals to the fat Albert, so after lunch I exchanged the top fly for a size ten Chernobyl ant.

I continued to fish upstream, until I approached the point where the river split around an island. I decided to halt my progression at this position, and I drove downstream to locale number two. Another car was parked ahead of mine, and I quickly determined it was another angler, who was nymphing just above a bridge. I decided to hike down the road for .3 mile, with the hope that the other fisherman might vacate by the time I returned. 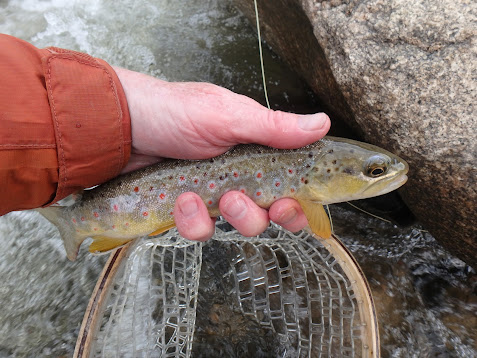 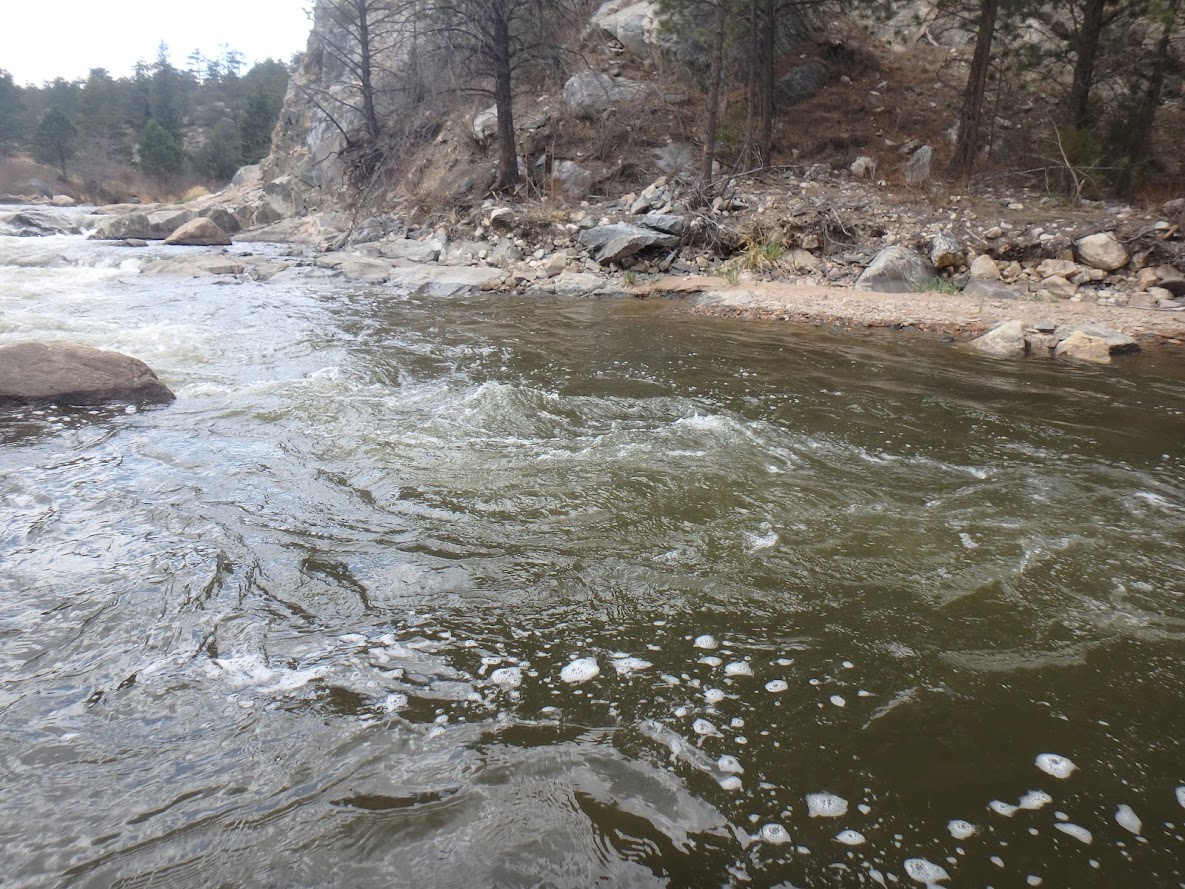 Shelf Pools Were the Ticket

During the next two hours I worked my way upstream with the three fly dry/dropper combination, and I succeeded in boosting the fish count to seven. Numbers four and five were also on the small side, but a nine inch rainbow thrashed in my net and boosted the count to six. During this time I swapped the hares ear for an iron sally, and after the sally failed to excite the fish, I replaced it with an emerald caddis. The first six trout nabbed the sparkle wing RS2, so I was quite suprised when a ten inch brown trout grabbed the emerald caddis pupa near the top of a deep run. This fish proved to be the longest of the day. 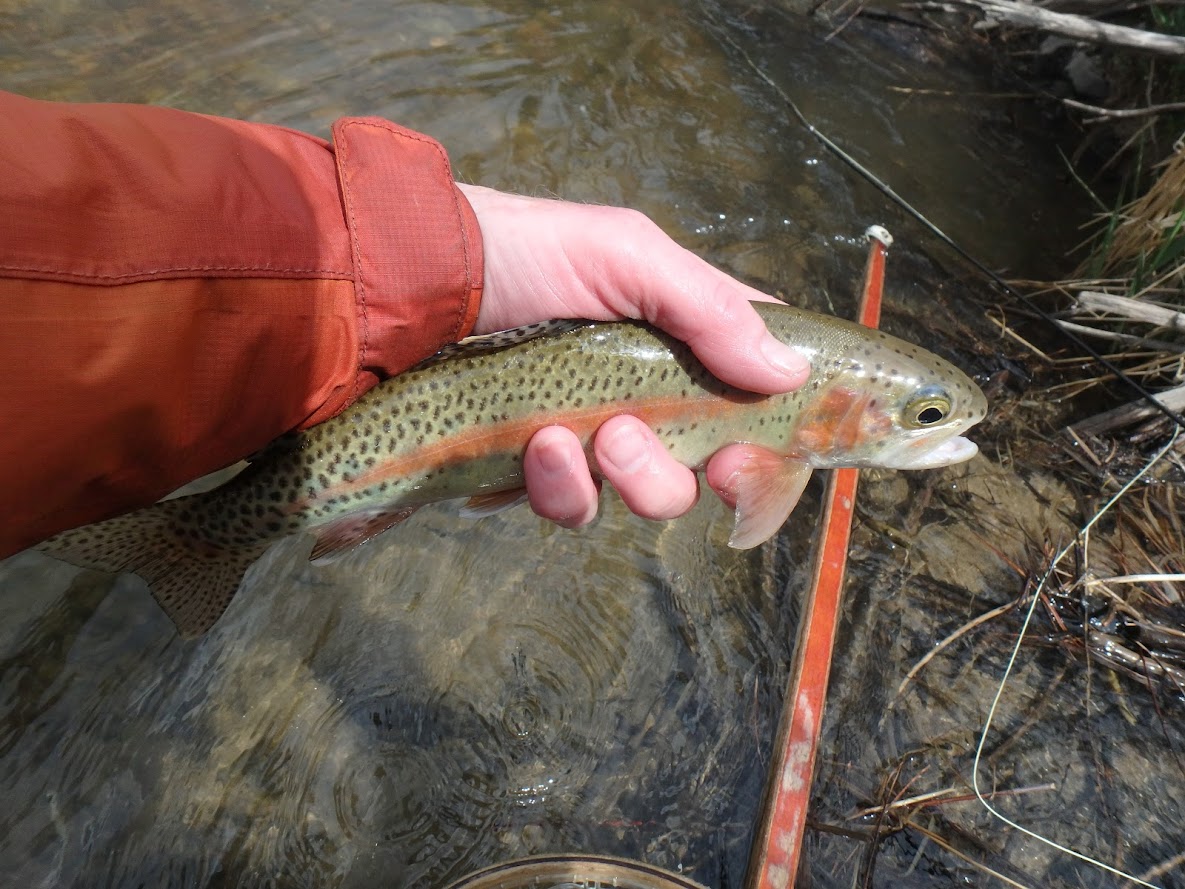 A Rainbow Joins the Mix

When I reached the bridge where my car was parked, I noted that the vehicle of the other angler remained in place. I was noticing some sparse blue winged olive activity, and I decided to investigate a nice run and pool upstream from my parking space. On previous trips I experienced decent success with rising trout in the aforementioned pool. Unfortunately as I approached the anticipated section, I encountered the other fisherman once again.

I reversed and returned to the car and once again drove to another pullout less than a mile downstream. For the next hour I progressed upstream through some nice pockets and moderate depth runs, but my efforts were in vain. At 3:30 as the sky darkened due to dense clouds, I noticed an increase in blue winged olive activity, and eventually several rising fish revealed their presence. I decided to take the plunge and removed the dry/dropper rig and converted to a Craven soft hackle emerger and fished it like a dry fly. I applied floatant to the body, and after a large number of drifts I managed to hook and land another small brown barely over six inches.

For my final act I skipped some marginal pockets and advanced directly to a long pool across from the Santa Fe. I paused and observed for a few minutes and spotted three tiny trout along the edge in front of me, as they darted to the surface to grab tiny morsels on a fairly regular basis. I was about to pass on the sighted fish because of their diminutive size, but I reconsidered and shot ten casts over the area. I could not follow the low riding emerger in the current seam, and I was about to quit, when I caught a glimpse of a rise next to a bank side boulder on the opposte side of the stream. This fish was a bit larger, and it captured my interest. 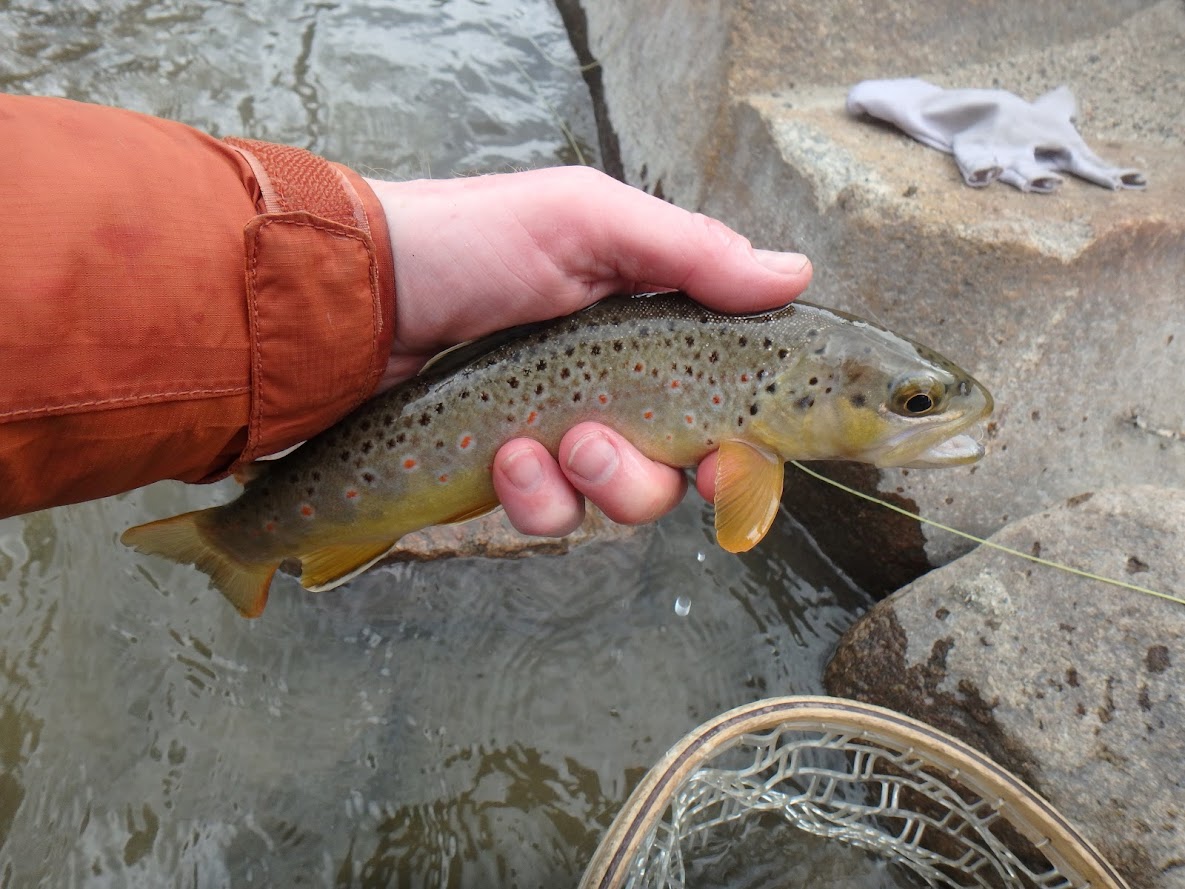 I waded one third of the way across the river, and I began executing reach casts above the rock that served as a current break for the target riser. After several casts four additional feeding trout revealed their presence. They were all ignoring my emerger, and I was unable to follow it in the dim light and swirling current, so I opted to replace it with a Klinkhammer BWO. The change proved fortuitous, and I netted two additional trout before I called it quits at 4:30. One was a ten inch rainbow and the other a comparable brown.

Monday was a challenging day, and I attribute the difficulty to the sudden rise in stream flows. Fortunately I adjusted and managed to make the best of the situation to reach double digits. The fish were small, but I was thankful for any action on April 30.