Since we camped next to Penns Creek Jeff was able to check it out on Thursday morning and confirmed that it was still running high and off color so we agreed to drive 30 minutes to Big Fishing Creek. On the way to Big Fishing Creek we traveled along Pine Creek, a tributary to Penns Creek, and a stream that Jeff frequents on occasion. Pine Creek was murky, but Jeff stopped at landowner Max’s house and chatted with him briefly. Jeff continues to cultivate a relationship with Max to enable fishing on his private water.

When we arrived at Big Fishing Creek we parked along the Trophy Trout section. The water was the typical milky green of a limestone spring creek, and we were next to some nice riffle and pocket water. I once again tried to use nymphs, but again couldn’t interest any fish. After trying a beadhead hares ear and beadhead pheasant tail, I switched to a hopper/dropper combination. The water wasn’t extremely deep so I reasoned the dropper was getting down to the level of the fish. But my reasoning was apparently faulty and no fish could be attracted to my flies. Eventually I came to a very nice long pool and worked my way through it to the top section where a nice deep run entered. Even in this enticing water I could not pound up a fish. 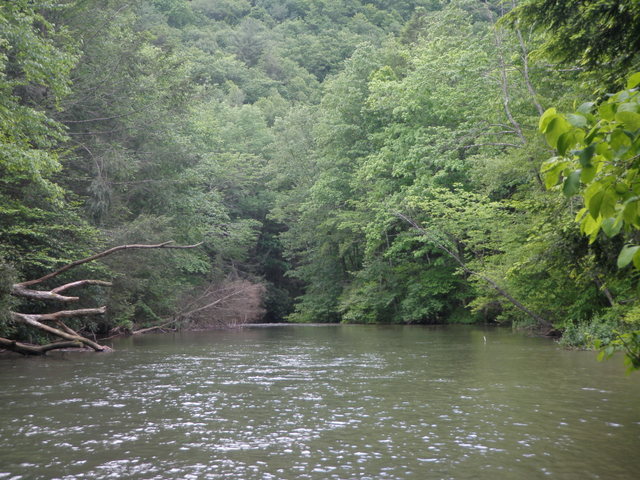 I reversed course and walked down the road where I met Jeff, and we decided to take a drive and explore upstream sections. We passed through the cabin area where signs announced that fishing was not allowed on Sundays. After crossing a bridge we skirted the Tylersville fish hatchery which is now defunct and continued upstream to a place where we crossed back over the stream and drove along the north side. Eventually we looped back to the stream above the Tylersville hatchery and stopped on the bridge to observe the water downstream. We spotted numerous regular rising fish, so Jeff decided to ask permission at the house bordering the stream just before the bridge. Much to our disappointment, no one was home, so we continued a short distance to the corner where the road we were on met the main road we had traveled before looping back.

A woman was on her porch about to enter her house, so Jeff decided to politely ask her about fishing the stream across the street. The woman informed Jeff that the land was owned by the Pa. Boat and Fish Commission, and she believed it was open to fishermen. We returned to a pullout just beyond the bridge and then angled through the woods to a point downstream from the bridge. This water was smaller than the Trophy Trout water we fished in the morning and early afternoon with trees closer to the water. We hopscotched up the stream tossing an assortment of flies with no luck and no rising fish until we approached the long pool below the bridge. Here we spotted several rising fish. 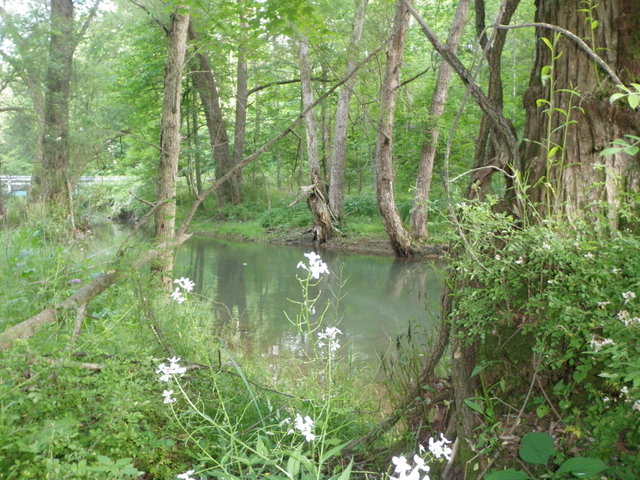 Since I had yet to land a decent fish on my trip, Jeff graciously guided me, and gave me first shot at the lowest fish in the pool. The fish was rising semi regularly toward the right hand side and Jeff handed me his five weight rod that had a small black foam beetle attached. I began casting and put several decent drifts over the area, but experienced no success. Much to our surprise the fish continued to rise in a sporadic manner. Finally on perhaps the tenth cast, a cast that wasn’t very delicate as I slapped the line down on the water hard, the fish rose and sucked in the beetle. I glanced to Jeff to comment on the poor cast when Jeff shouted “set”. I quickly looked back and set in the same motion and played and landed a pretty 15″ brown trout, my first fish of the Pennsylvania trip.

We continued alternating as we moved up the pool, and I had a shot at another rising fish just beyond an overhanging tree limb. I had switched back to my rod and tied on the parachute sulfur that Jeff had given me. After several errant casts I edged toward the right side of the stream and hooked a cast around the branch so it landed six feet upstream of the rise. This proved to be a winner and I landed an eight inch brown.

When we got to the bridge we circled back around some thorny wild roses and returned to the van. It was now getting toward evening, so we drove back down toward the trophy trout water. Now the after work crowd was arriving and nearly every pullout contained at least two vehicles. We spotted a parking area with no cars and elected to give it a try, but after hiking through some muck discovered that the stream divided into two or three channels, and we weren’t interested in fishing such small water for the evening hatch should one materialize.

We continued on down the road to a pullout with one car, and it was in the area we covered earlier in the day. We both walked down to the water and took good positions next to some attractive large runs and pockets. The large pool where I’d exited in the early afternoon was just above us, and we were curious if it was taken, so I retrieved Jeff’s walkie talkies. I gave one to Jeff while I hiked up the road to check out the pool. As expected there was a fisherman from New Jersey there and he’d “reserved” the pool by placing a folding chair at the end of the trail from the road. Two additional fishermen were entering the pool as well. I radioed Jeff to inform him the pool was taken and returned to meet him.

I was bored with standing and watching the water, and I’d seen a few sporadic sulfurs floating up from the water, so I decided to prospect a bit. On the fifth cast near the tail of a current seam a fish rose and slurped in my parachute. I was fortunate to land a 13″ wild brown. Meanwhile spinners began to hover and bob above the water and Jeff and I attempted to catch some. After numerous missed swipes, I managed to trap one in my net, and we discovered the spinners had dark olive bodies. I clipped off my sulfur and tied on a spinner with a dark olive body before the daylight waned too much.

In spite of our anxious anticipation, the spinner fall never materialized. On Friday we ran into Eric Stroup, a local fishing guide and expert, and he informed us that the spinners we observed were cornuta spinners, and they do not mate and fall to the water unless the weather is perfect and to their liking. We returned to the Union County Rod and Gun Club with minimal evening action on Big Fishing Creek.