Jane and I completed a scouting hike on the Alpine Trail in the morning, and I used my Garmin watch to clock the distance. This information was useful, as I planned my afternoon fishing venture. It was 68 degrees, when I began to fish on Monday afternoon, and this may have been the high for the day as a result of afternoon clouds, wind and breezes. 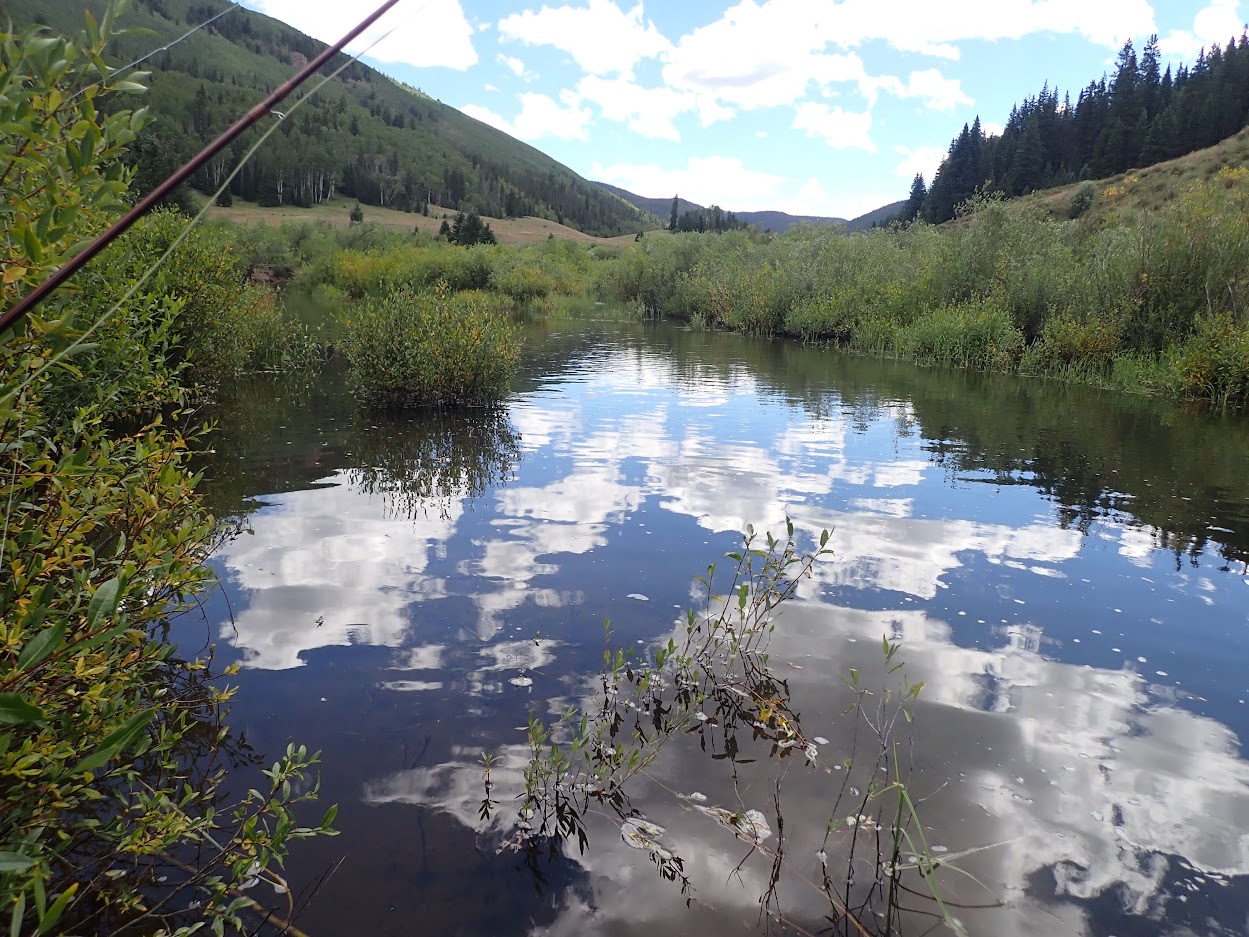 Beaver Pond at the Start

After a decent hike I angled down to the creek and arrived at a long, slow-moving beaver pond, and the telltale rings of feeding fish up and down the pool caught my attention. I quickly rigged my Orvis Access four weight with a peacock hippie stomper and a beadhead hares ear nymph on a two foot dropper. On the first cast a four inch brook trout clobbered the stomper, and as I worked my way up along the left side of the pond, I continued casting and netted three brook trout that met my criterion for counting. One crushed the hippie stomper, and two nabbed the trailing hares ear. I was pleased to discover that both flies were liked by the pond residents. Wading a beaver pond with its mucky bottom is always a challenge, and this one was no exception. I grew somewhat bored with the “stillwater” fish and began seeking an exit strategy. If I turned left, I needed to wade through the marshy area filled with some sort of low woody shrub that tended to grab fly rods and lines. A right side exit involved crossing the pond with its silty bottom and deep water. If I could pull it off, however, there was a shorter distance through the shrub filled marsh, before I reached the sagebrush hill and higher ground. I chose the second option, although I waded along the left bank for a ways, until I found a shallower spot to cross. Once I was on high ground, I followed the contour of the hill, until I reached a spot, where the creek nearly bordered the sagebrush. 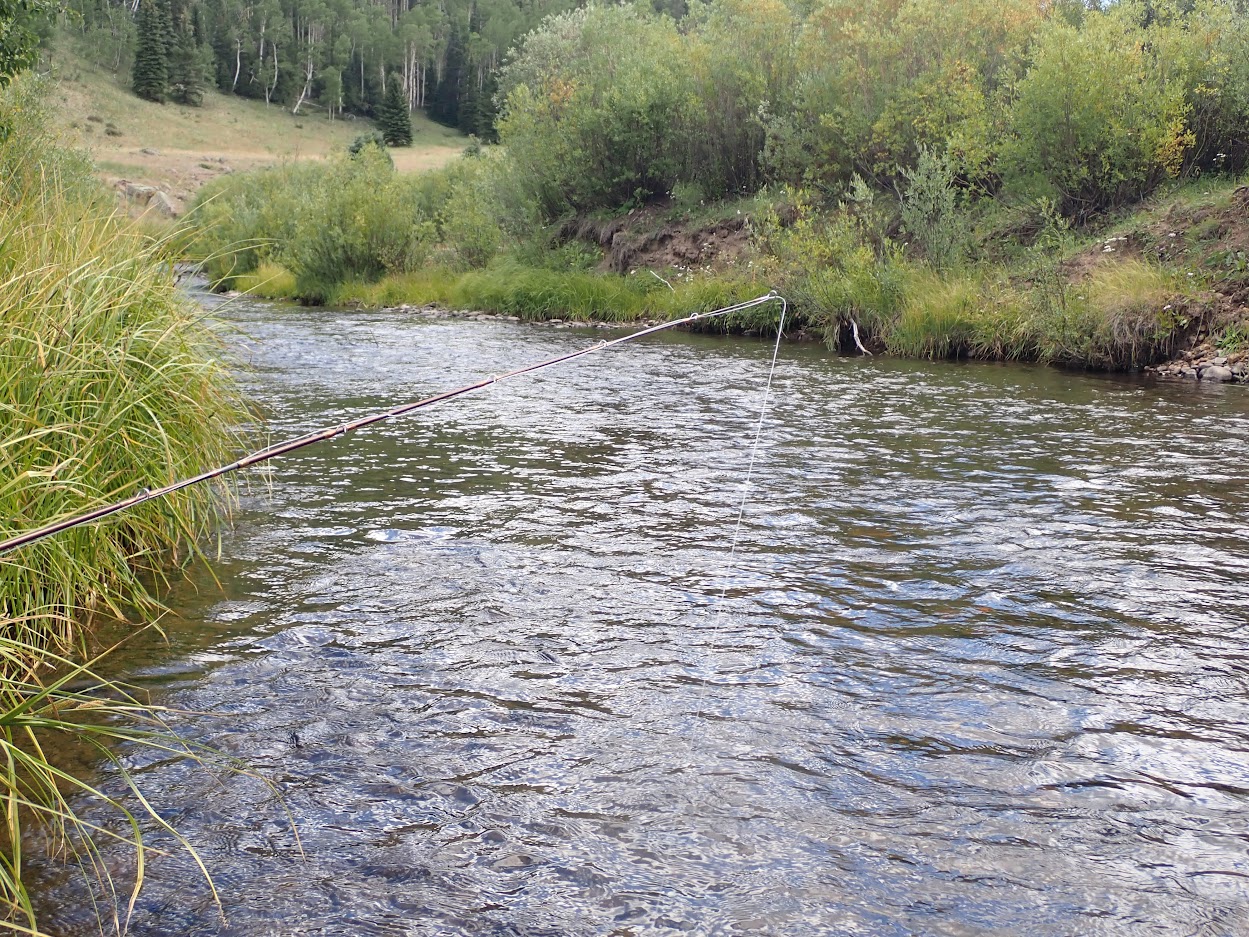 Top of the Beaver Pond

The creek at this point met my expectations; moving water consisting of riffles, pockets, and occasional deep pools. Between 1:15PM and 3:30PM I methodically worked my way up the creek and built the fish count from three to twenty-three. Roughly 75 percent of the brook trout that I landed snatched the trailing hares ear, and 25 percent darted to the surface to slurp the hippie stomper. There was a section early on, where I was catching trout in obscure shallow runs of a foot or less in depth, and these trout were colorful nine inch brookies. 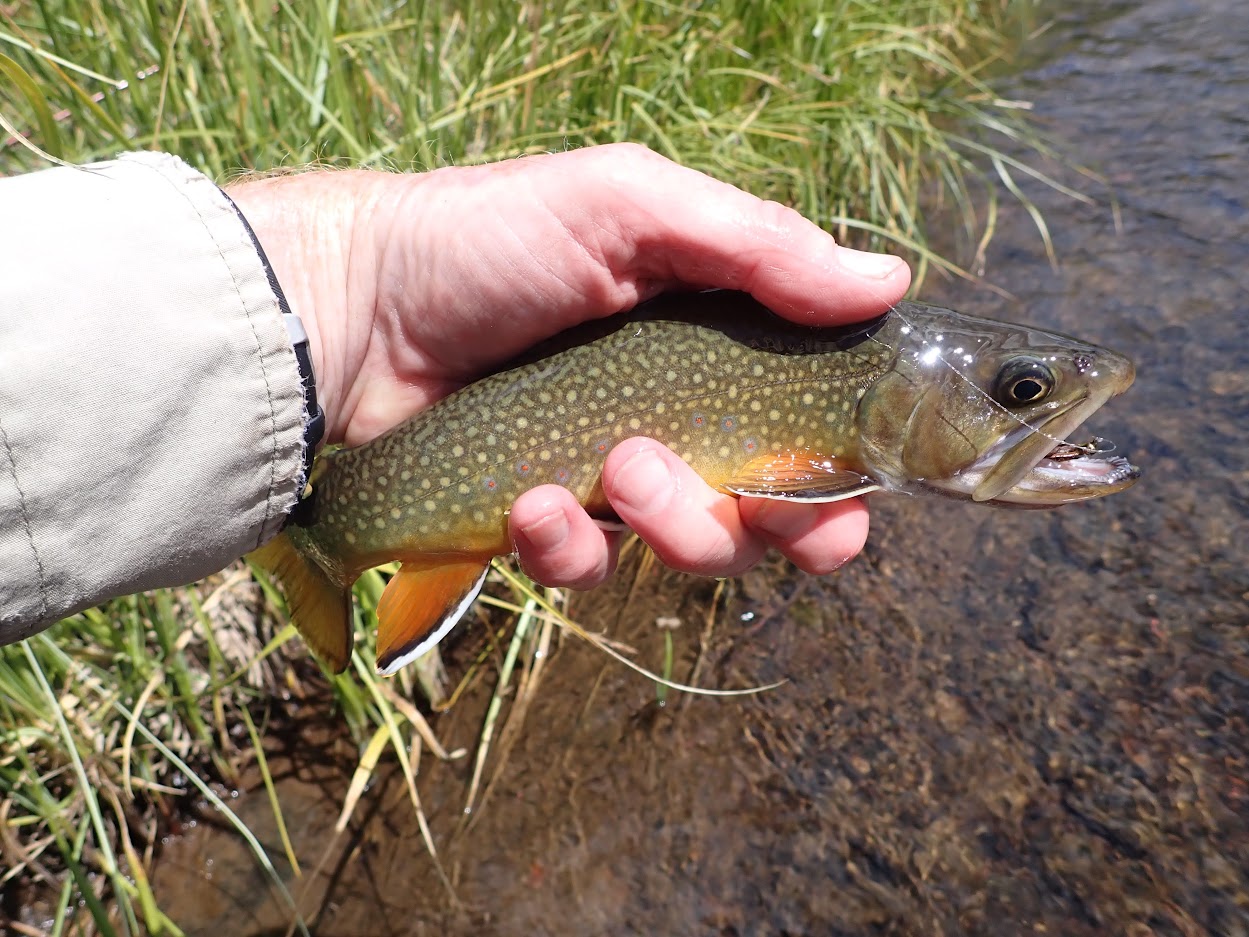 I noticed that nice pools that were easily accessed often failed to produce; whereas, marginal spots in difficult to reach stretches yielded some of my better fish. Angler pressure was clearly a factor. Tamped down grass and scuffed dirt clearings made it easy to identify the presence of man. 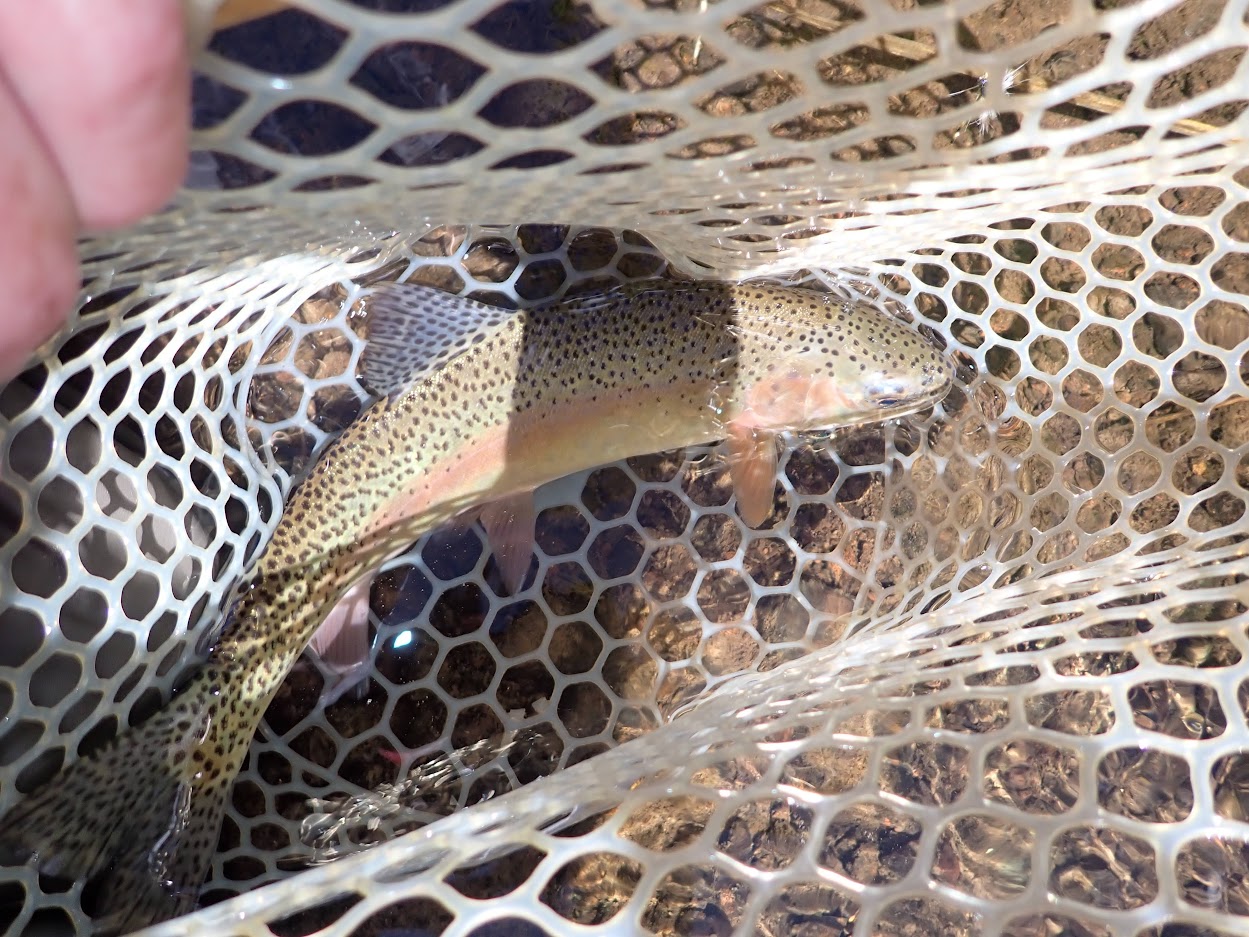 The Only Trout, Not a Brook Char

By 3PM the catch rate slowed, and the thread head on my hares ear began to unravel. I replaced the hares ear with a salvation nymph, and in the process of landing a brook trout, I snapped off the newly attached fly. I uttered some choice words and replaced the salvation with an ultra zug bug. The fishing gods must have been looking out for me, because the hippie stomper dipped in the next deep hole, and I connected with a larger than average and aggressive fish. I carefully played my catch around the pool and eventually netted a feisty thirteen inch rainbow trout that gulped the ultra zug bug. It was the only fish that ate the shaggy peacock dubbed imitation, and it proved to be my only fish that was not a brook trout and the largest fish of the day. Unfortunately the ultra zug bug could not resurrect its magic, and I suffered a lull, so I made a radical change and swapped the stomper for a tan pool toy hopper, and exchanged the ultra zug bug for another hares ear nymph. 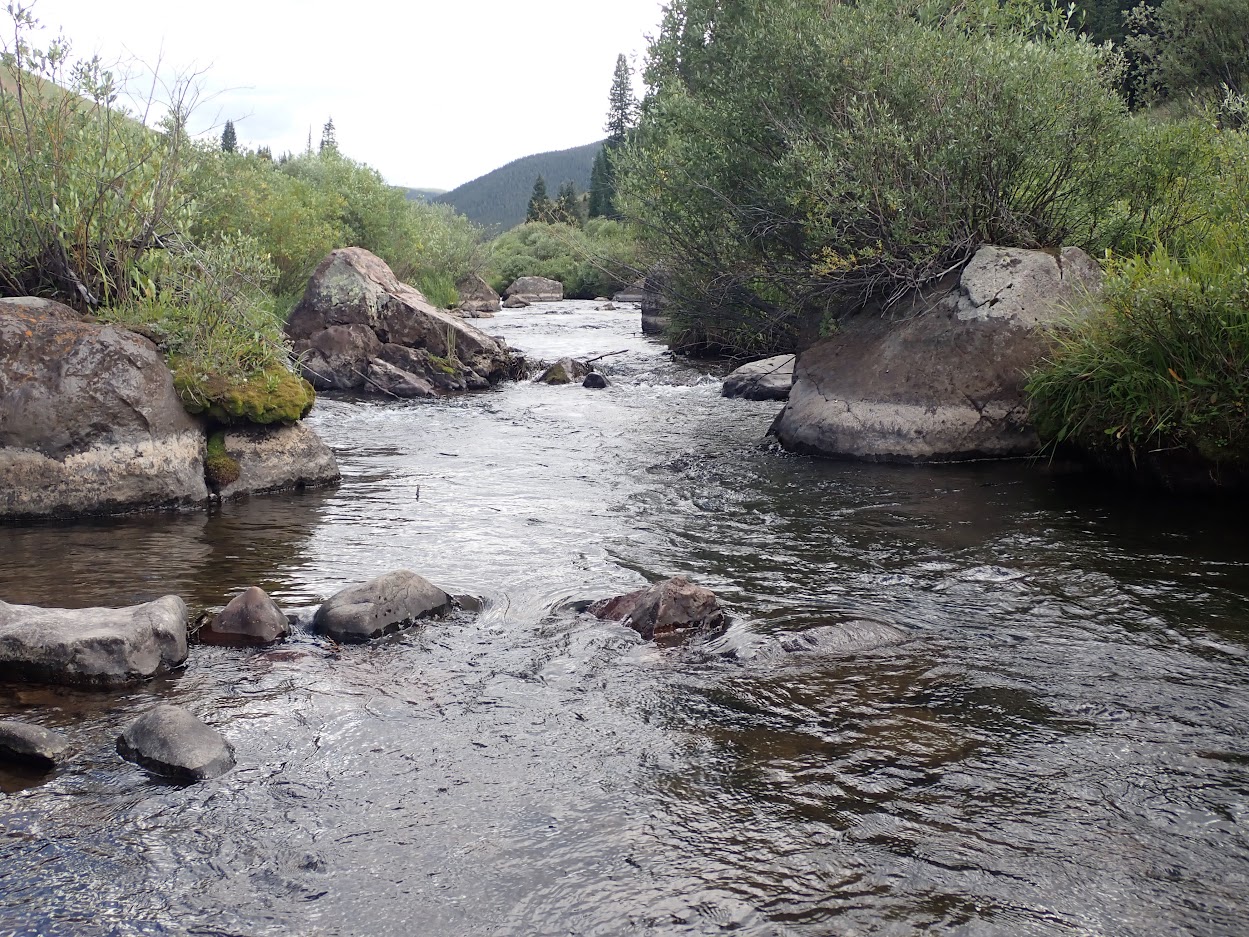 The hopper attracted immediate interest in the form of bumps and refusals, but no trout came to the net. I suspect the size 8 hopper was bigger than the plentiful naturals surrounding the creek and too large for the mouths of the smaller brook trout. As a final act, I returned to the hippie stomper and paired it with a size 16 olive brown deer hair caddis. The caddis fooled three very colorful brookies and brought the fish count to thirty-one. It was 4PM at this point, so I stripped in my line and hooked the caddis to the rod guide and climbed an extremely steep bank, before I intersected with the trail. 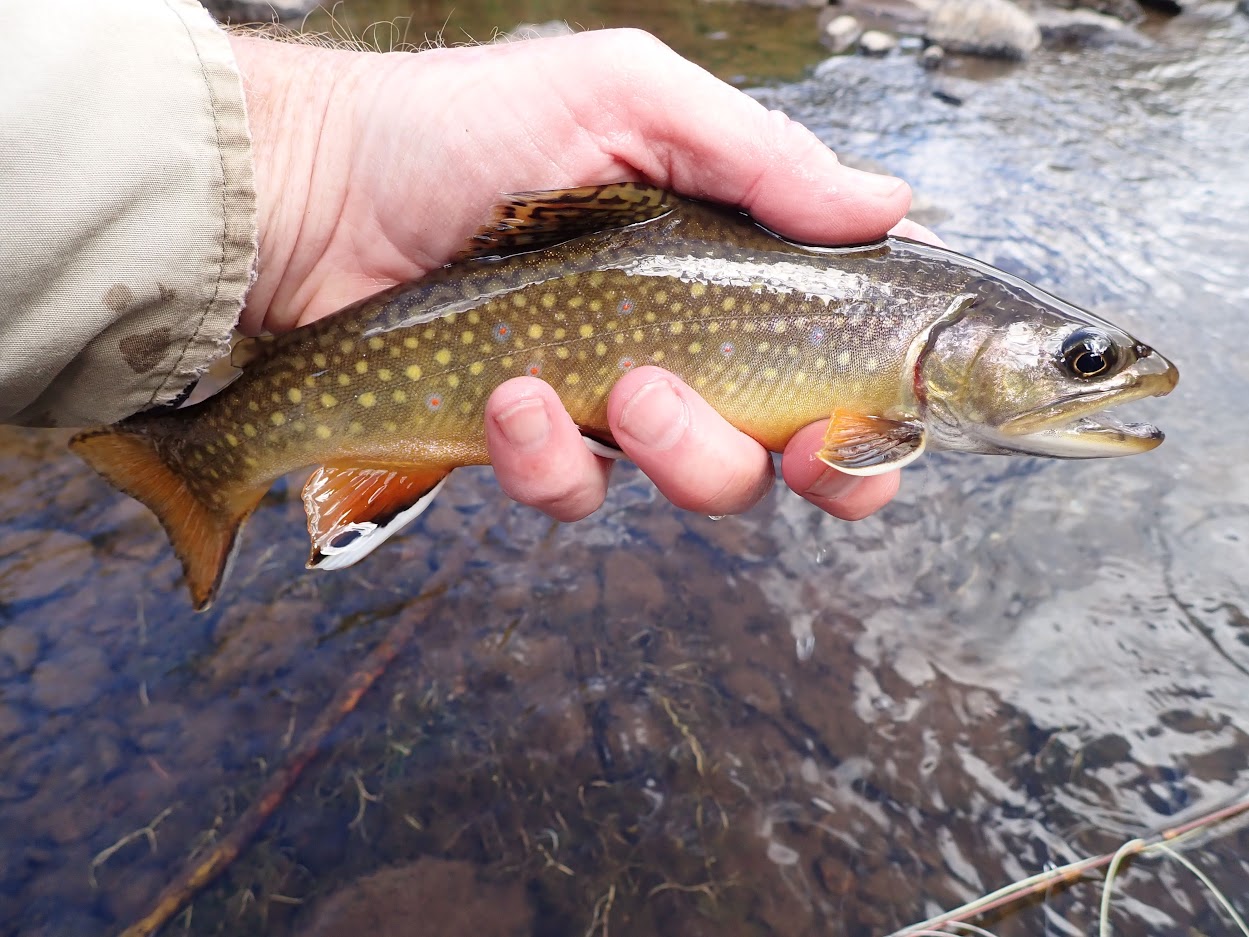 Monday was a blast on Big Blue Creek. I landed thirty brook trout and one rainbow trout in three hours of fishing. I prospected with mainly two flies, and I enjoyed the confident feeling that a fish would grab my offering, if I presented my flies in a natural manner to likely holding spots. That is one of my favorite mental states while fly fishing. Bring on Tuesday.