Location: .8 mile from the trailhead and then upstream for .4 mile

I set out on my three day two night camping/fishing trip with guarded optimism. I planned to camp and fly fish on three different backcountry high elevation streams, and two would be first time exploratory ventures. I was working with minimal information, and that always elevates the risk of such undertakings; however, positive results make such remote excursions even more gratifying.

I made my first stop on Monday at small and tumbling Beaver Creek, and I am pleased to report, that it was an unqualified success. The weather was bright and sunny and very warm with the high temperature close to ninety degrees, and landing a decent quantity of fish in these challenging weather conditions was a testimony to a productive stream.The creek was very clear, and I had no basis for comparison, but it seemed that flows were nearly ideal. 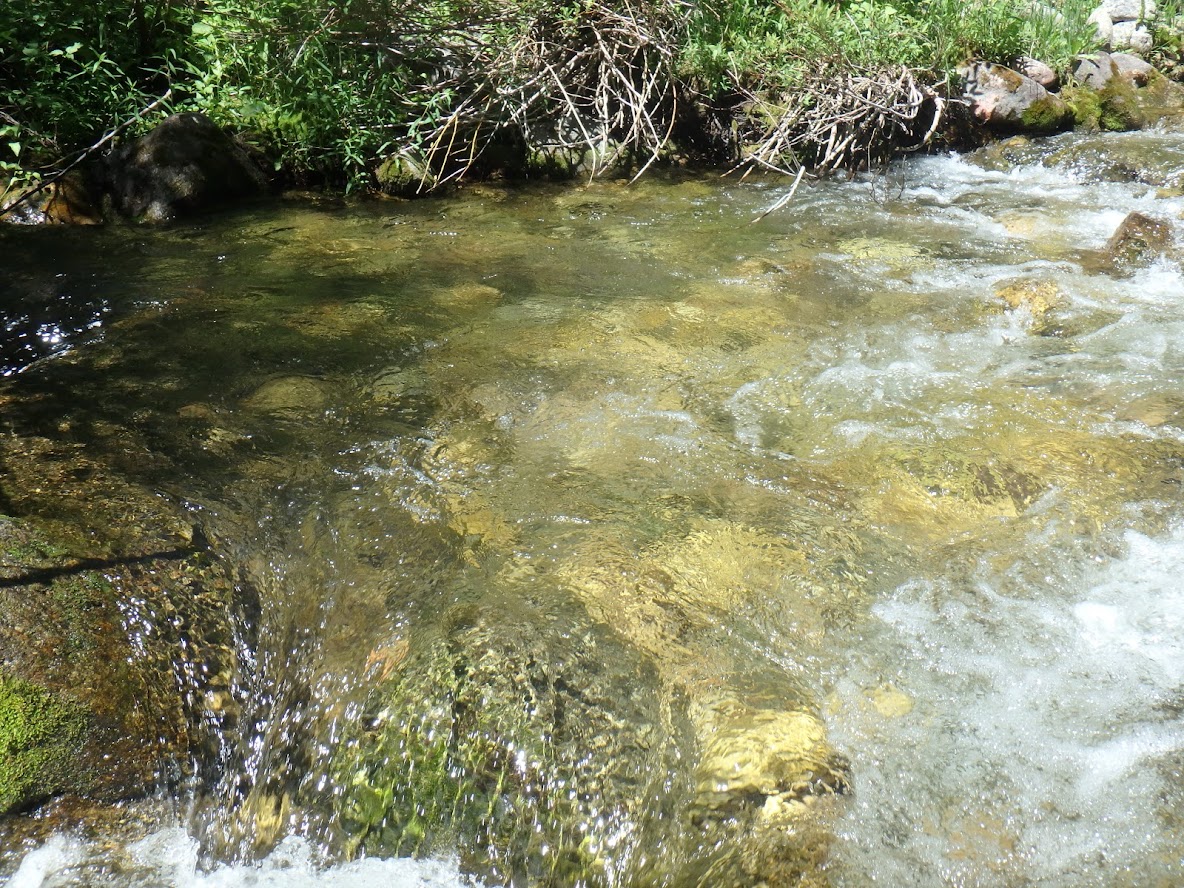 Nice Depth on a Small Stream

I began fishing with at 11:45AM, and I landed a pair of rainbows, before I found a nice space for lunch at 12:05PM. I was off to an auspicious start. My quest for trout began with a solo peacock hippie stomper, but after lunch I sensed that I was passing through productive water with no positive results. In response I added a beadhead hares ear and salvation nymph, but this combination was too long and cumbersome in the narrow and tight quarters of Beaver Creek. I responded by taking a break from scrambling over boulders and logs and removed both nymphs and then knotted a salvation two feet below the hippie stomper. The two fly dry/dropper began to produce, and the fish count mounted to eight fish, when a small fish somehow separated the two flies from my leader. I suspect an old abraded knot was the cause. 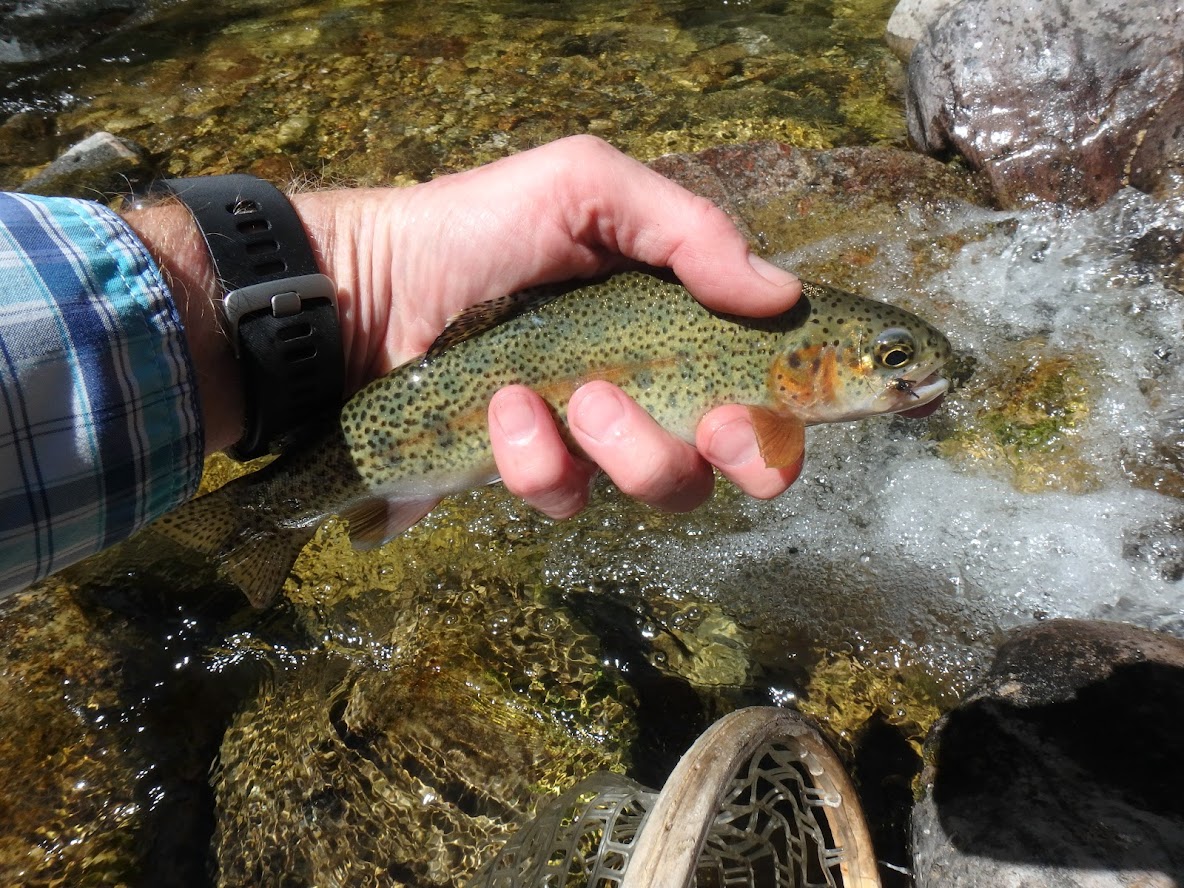 Pleased With This One 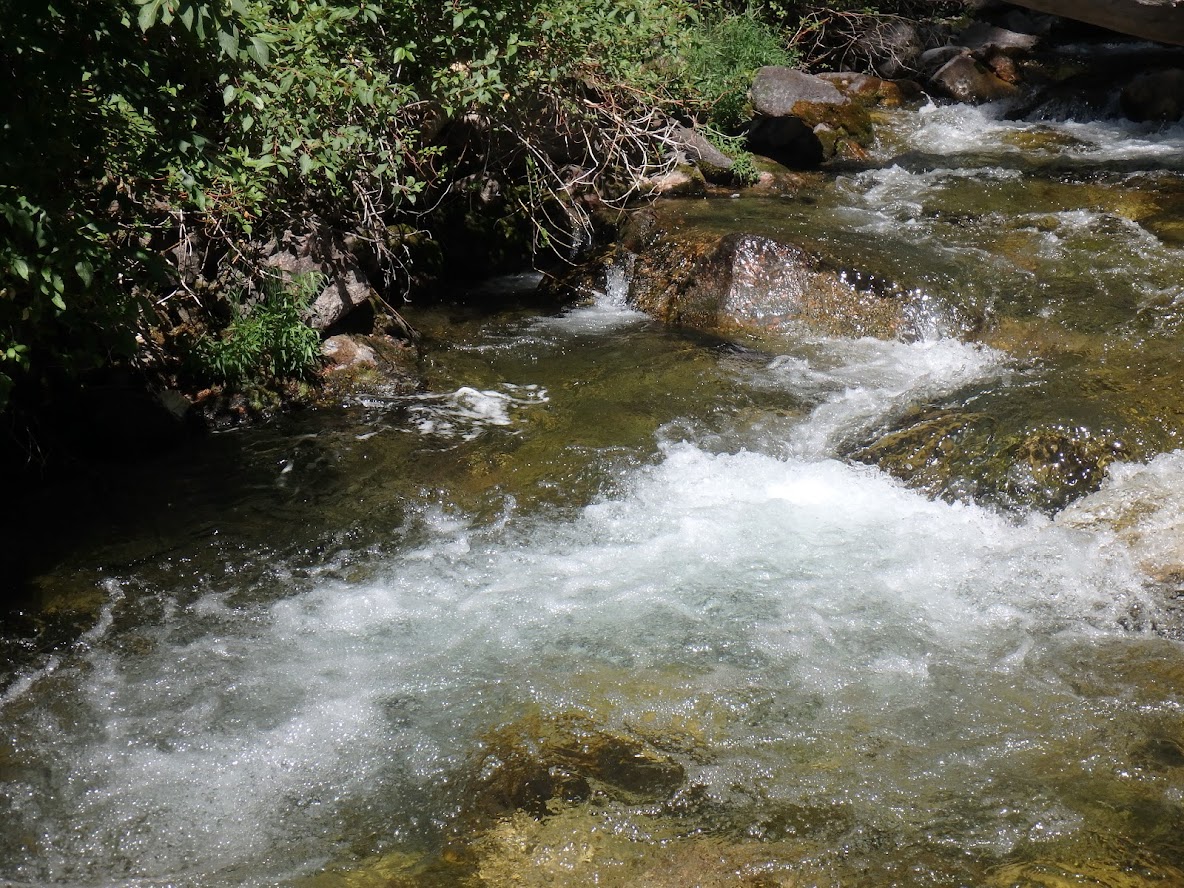 I Did Not Overlook the Foam

I was not anxious to sacrifice another peacock stomper, so I tried one with a silver ice dub body. This hippie stomper remained on my line for most of the afternoon, and since I was building my lineup anew, I replaced the lost salvation with an ultra zug bug. I was convinced that the small stream residents were not choosy, and my thought process was subsequently validated. The fish count advanced to twenty-two, and by 3PM the shadows grew, and I struggled to track the hippie stomper in the alternating glare and shade. I reacted by replacing the hippie stomper with a Chernobyl ant, and the yellow foam indicator was marginally easier to follow, but the large terrestrial was not as popular with the trout. 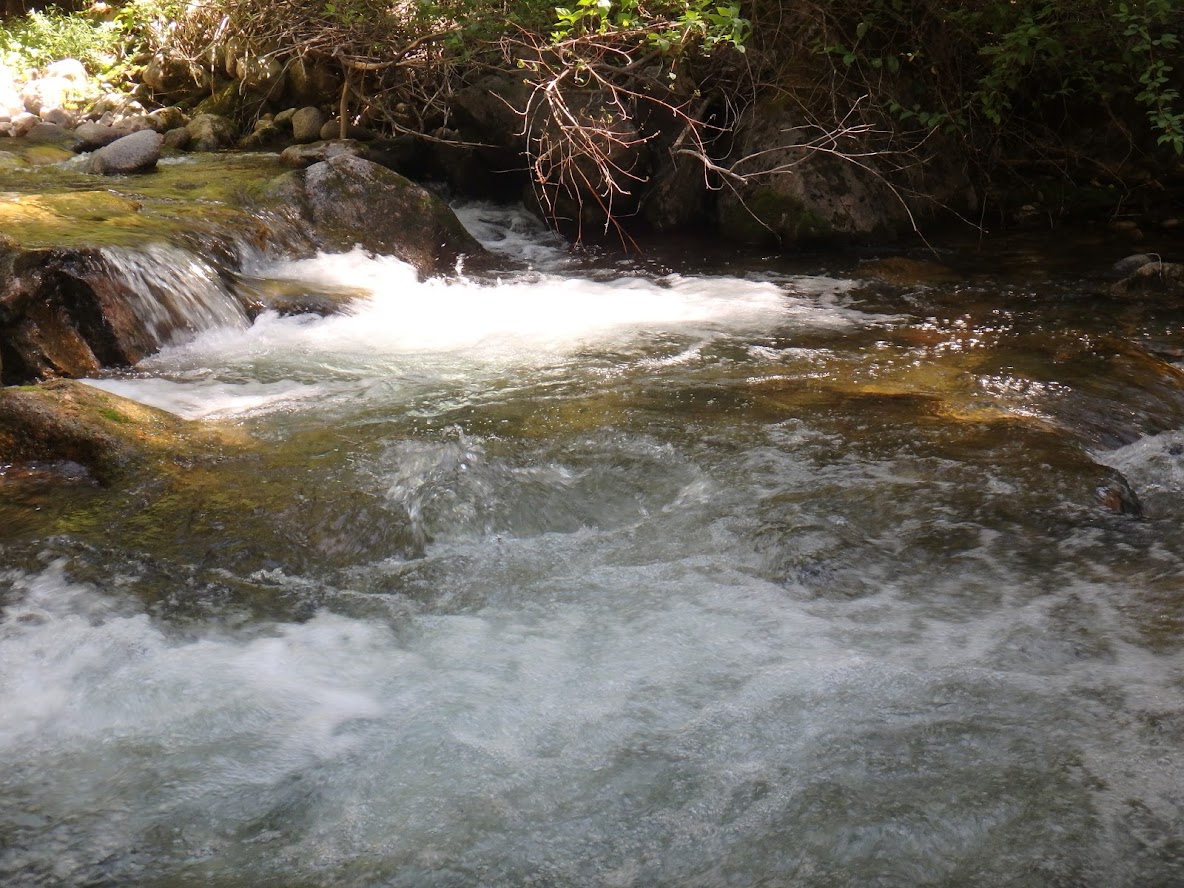 Emerged from Beneath the Froth

Once again I initiated a change, and I sought a fly that was large and visible, and the choice became a size 10 tan pool toy hopper. I soon rued my failure to go this route sooner. A couple rainbows aggressively crushed the hopper, and then a nice trout mauled the terrestrial in a very attractive deep pool. After I set the hook, the fish immediately streaked under a large rock and wrapped me around some submerged logs. I was unable to retrieve the flies intact, and they broke off. 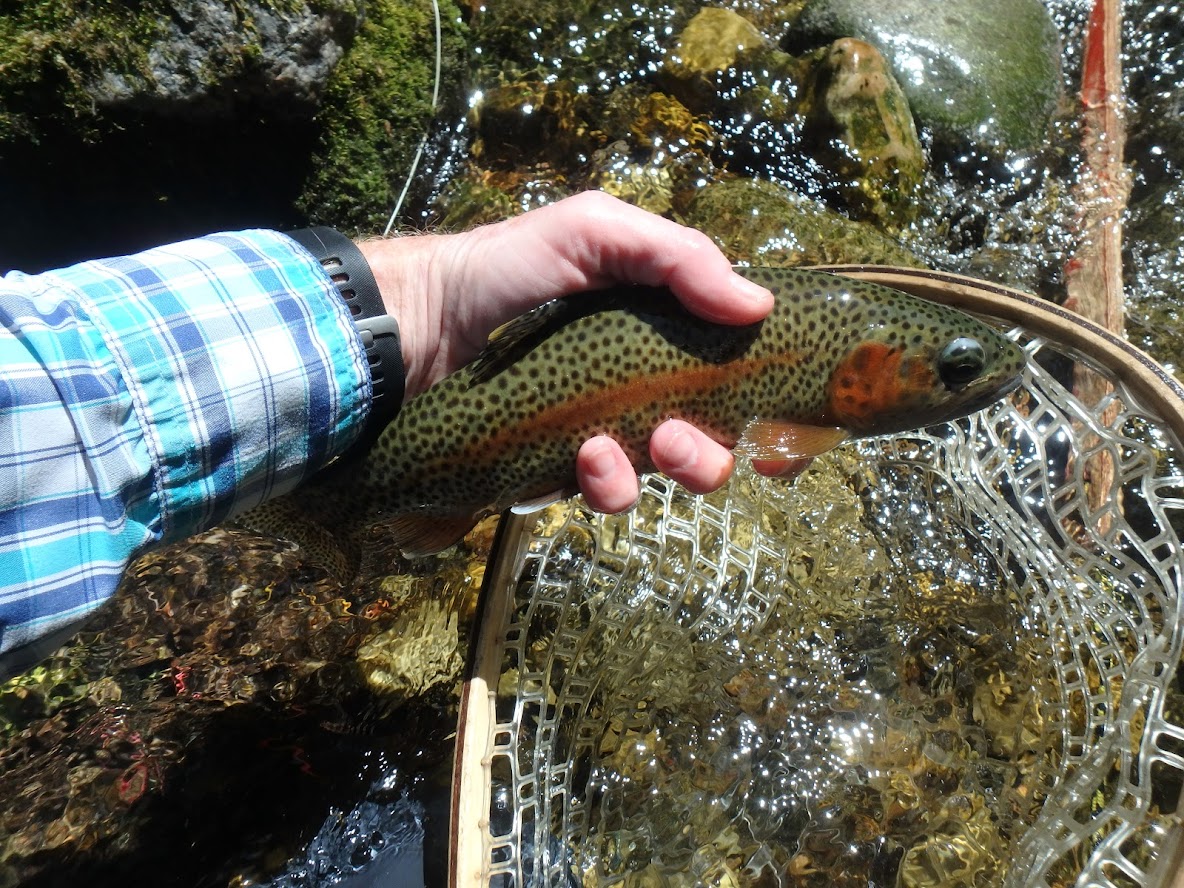 Scarlet on This Larger Than Average Bow

Most of the late action was on the hopper, so I replaced the lost foam top fly with another and skipped the dropper. The last hopper accounted for two trout before four o’clock arrived, and a very steep side wall on the trail side gave me concerns about my ability to return. 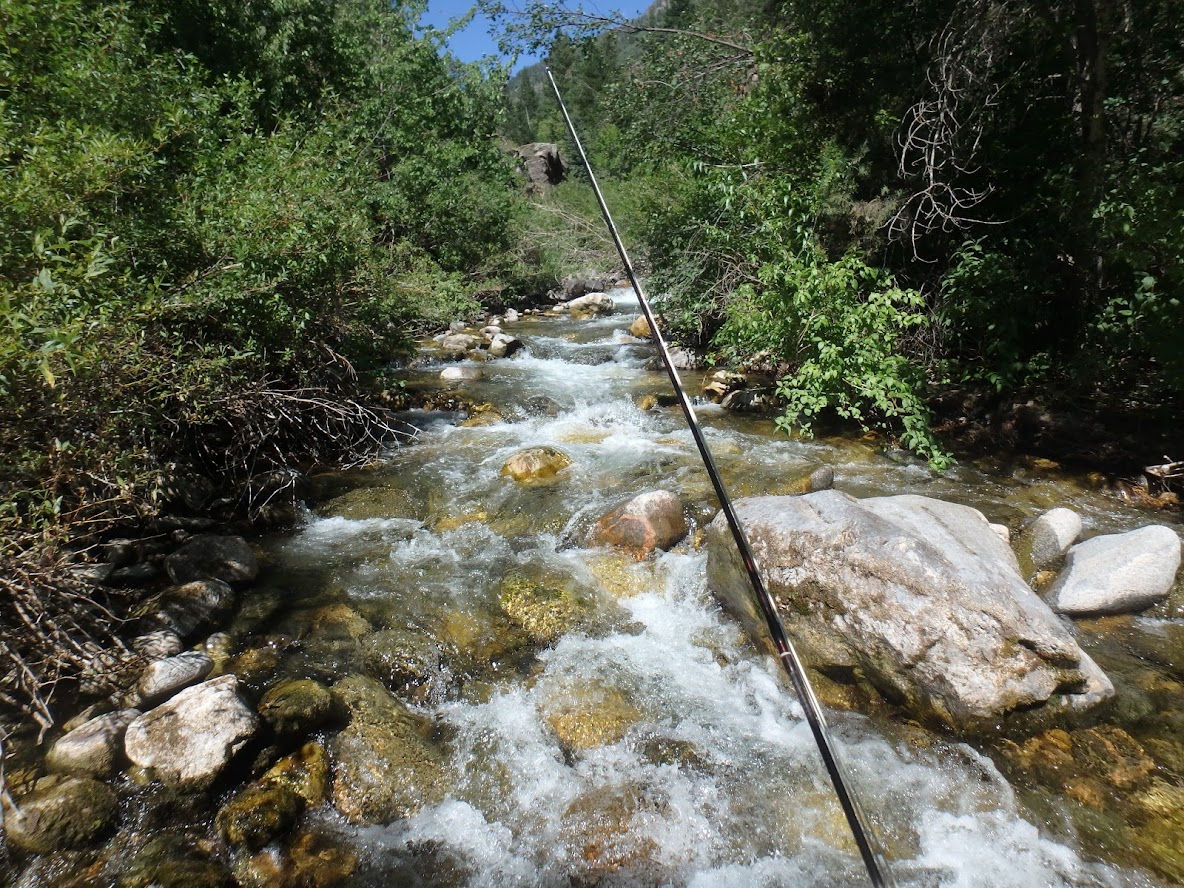 Beaver Creek was a clear success. I landed twenty-seven trout, and I estimate five were brook trout and twenty-two were rainbows. The rainbows were mostly in the 9-12 inch range, and a couple of thirteen inchers were highlights. 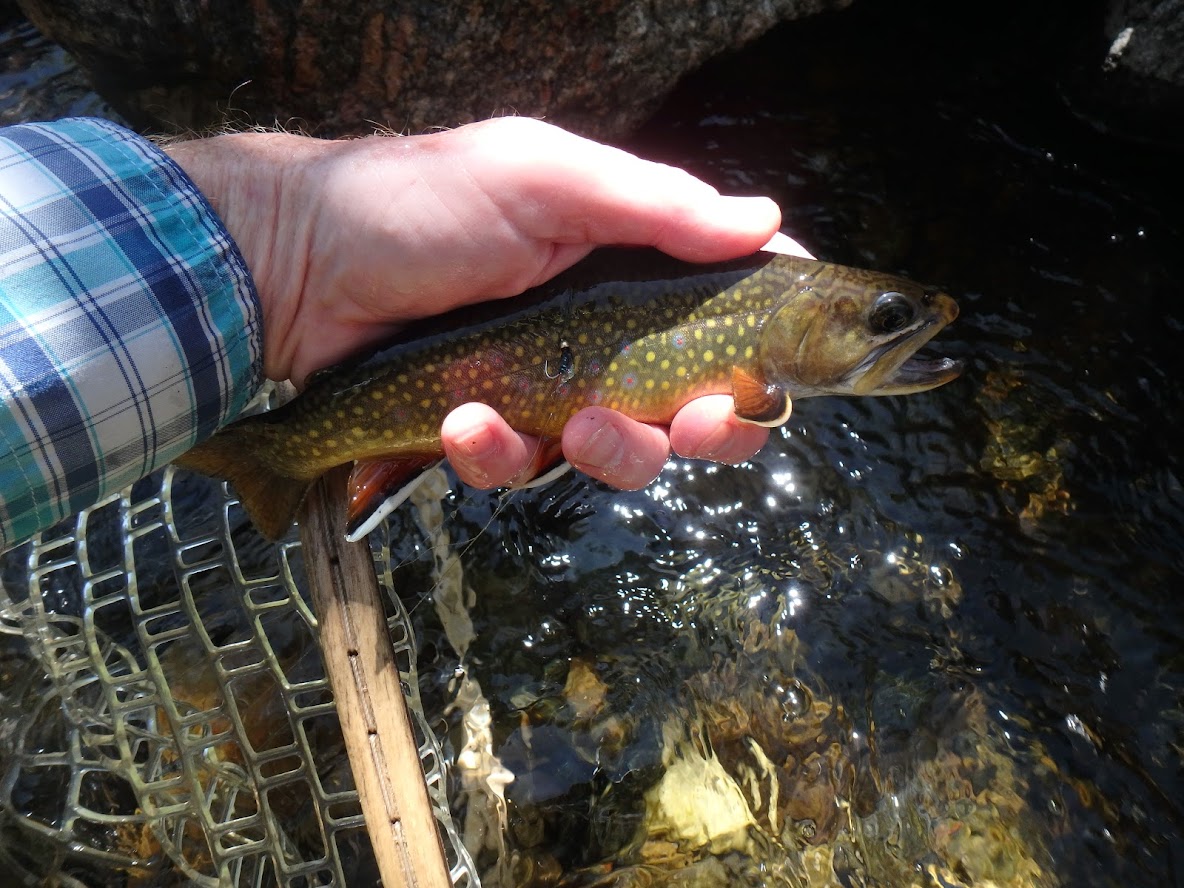 The day was not all easy pickings. I probably experienced as many long distance releases as fish landed. Quite a few fish nipped the dry fly but dropped off quickly, when I raised my rod to set. The tight quarters made executing a swift set difficult at times, and casting around branches and overhanging bushes was an ongoing challenge. Perhaps the greatest hurdle to success was simply wading. I frequently adopted the position of a contortionist in order to move under, over, and around stream obstacles. I never fell into a confident rhythm, yet the catch rate was steady, and I was pleased with the results for a first time visit.