With mild temperatures forecast for Wednesday, March 3, I could not contain my urge to visit a local stream for my first fishing outing of 2021. My initial plan incorporated a trip to the North Fork of St. Vrain Creek, but when I checked the stream flows, I was disappointed to discover a reading of .66 CFS. Apparently the work on Buttonrock Dam was still in progress. I quickly refocused my search and settled on Bear Creek and the South Platte River near Deckers. Ultimately I selected Bear Creek, because it was a shorter drive, and I was reluctant to travel the extra time to Deckers for an early season trip. 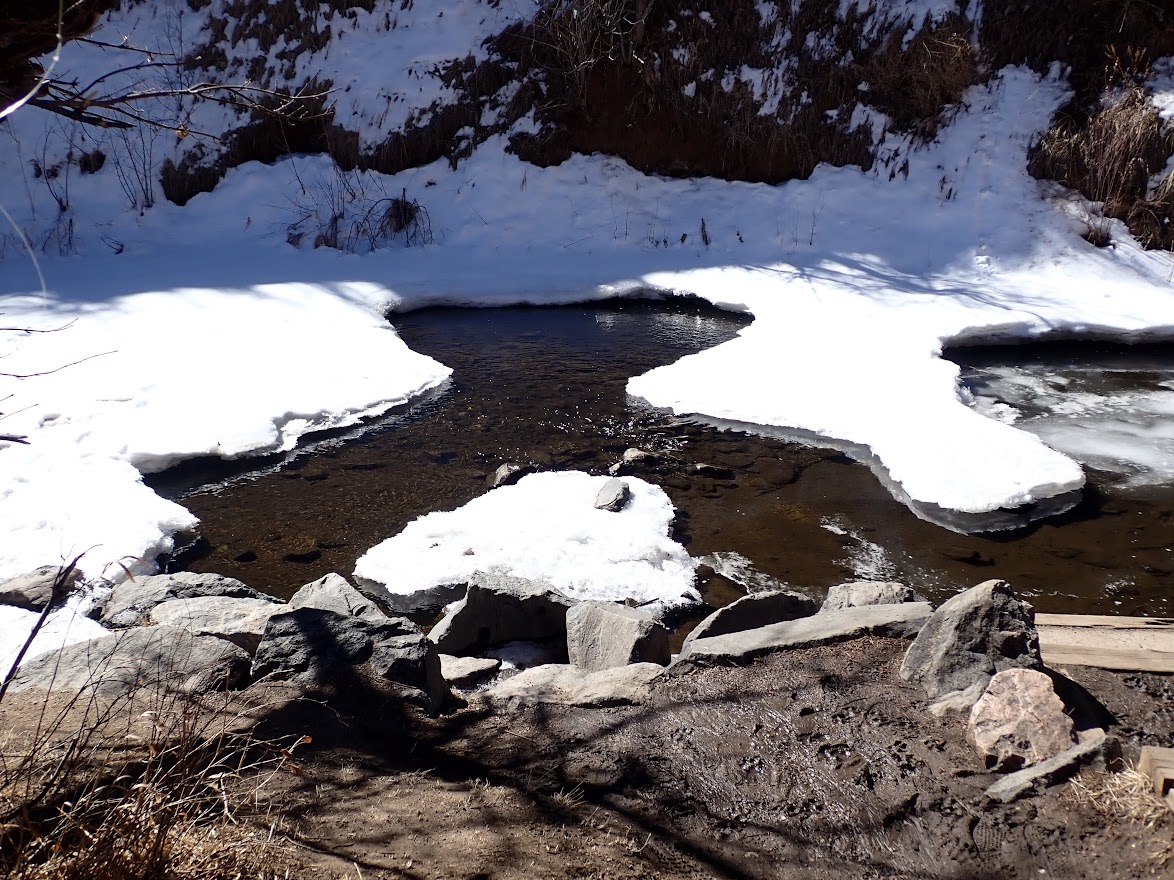 I arrived at the Lair O’ the Bear Park lot by 10:45, and I was armed with my Sage four weight and ready to cast by 11:00AM. I was disappointed to learn that much of the creek was covered in ice and snow, but I gambled that I could entice a fish or two to my flies from the intermittent open sections. I began my quest for fish number one of 2021 with a yellow fat Albert, hares ear nymph and sparkle wing RS2. On the second cast one of the nymphs hung up on the stream bottom, so I gave the rod a quick upward flick. The flies immediately came free, but the catapulting action of the the lift and bent rod sent all the flies to a dead branch above and behind me. I attempted to unwrap the flies, but it was a futile effort at retrieval, and I broke off three flies after only two casts in the new season. It was an ominous start to 2021. 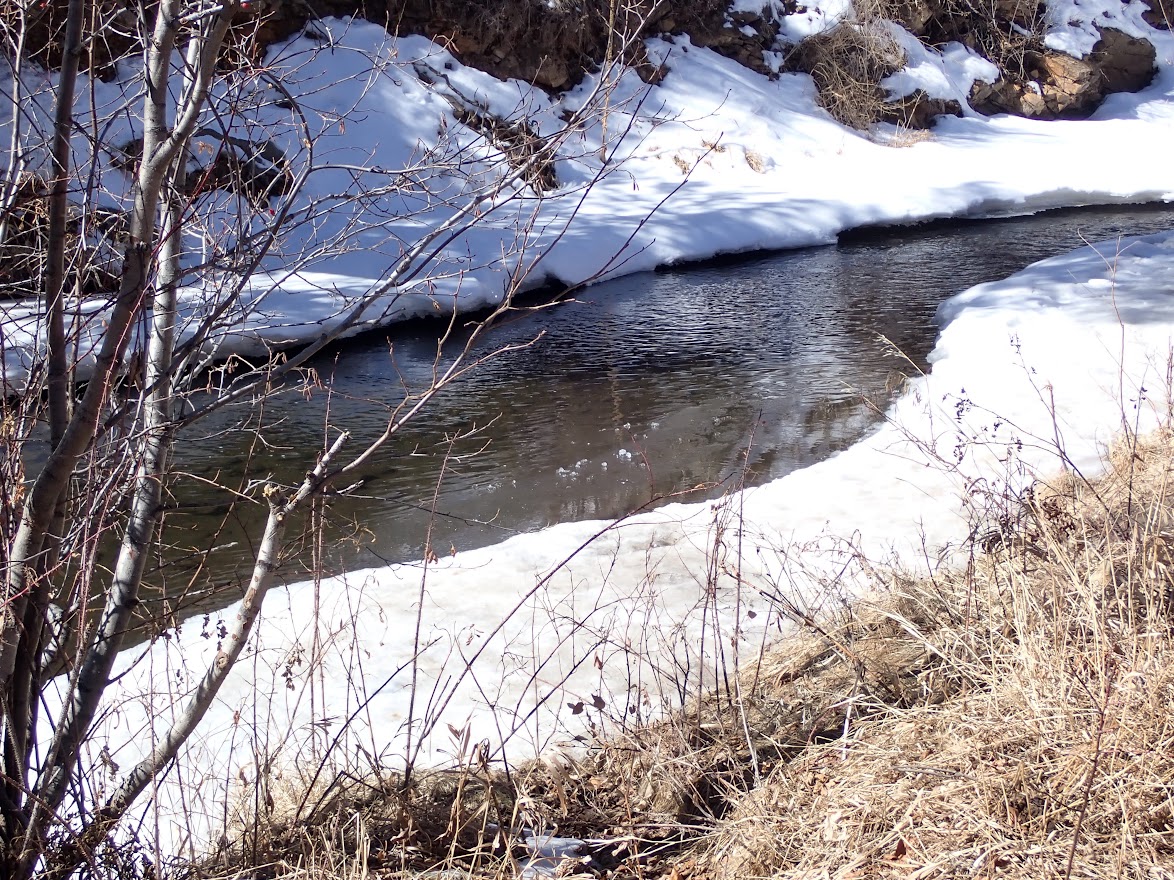 I found a nice rock and sat down, while I reconfigured my line. For some reason I replaced the fat Albert with a size 10 Chernboyl ant, but I replaced the hares ear and RS2 with different versions of the same flies. I began moving along looking for openings in the ice and snow that enabled decent drifts, but I was unable to attract the attention of any resident trout. My mind began to wander to thoughts of moving to the South Platte River above Chatfield Reservoir, as I knew that section of the river would be ice free. 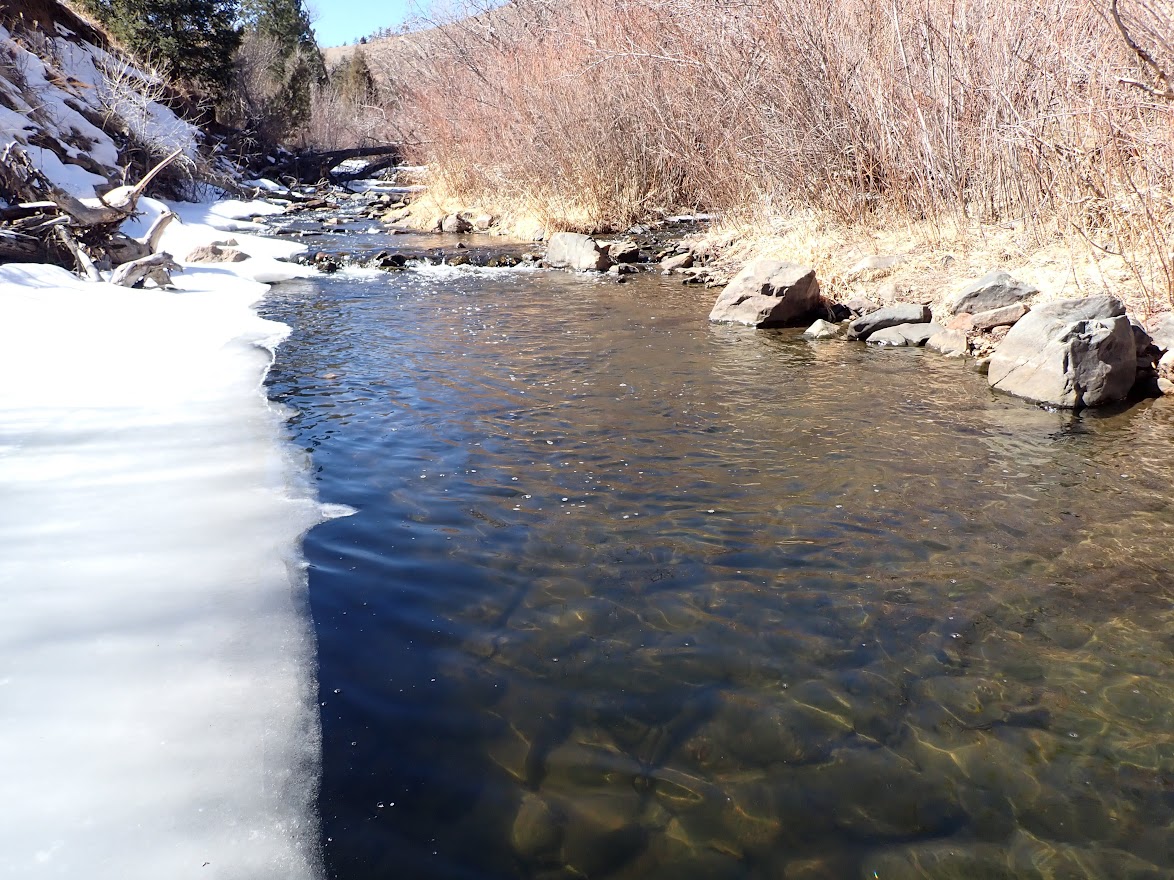 Scene of My One Landed Trout

After hopscotching through five holes I encountered another fisherman, so I circled around him and followed the trail to a spot above a foot bridge. I resumed the practice of fishing the open areas, until I encountered a nice deep run with an overhanging ice shelf along the left side. I executed ten casts, and then I spotted a couple decent trout as they darted from beneath the ice shelf. One seemed to stop three feet out from the shelf, but I was unable to spot it in the greenish brown bottom. 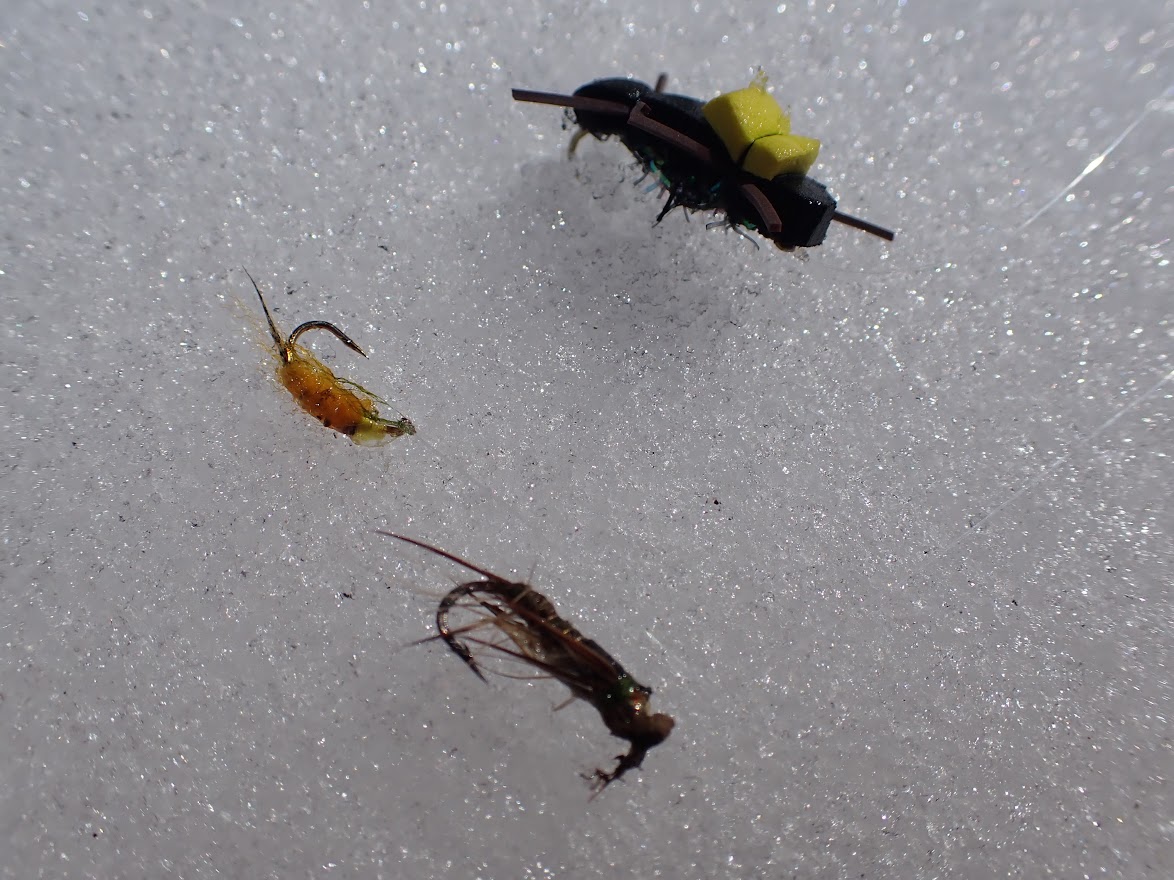 Orange Scud Was a Winner

The sight of several fish spiked my focus, and I decided to swap the RS2 for an orange scud. I surmised that perhaps the bright orange color would imitate eggs or at the very least stand out compared to the drab brown and olive background. On the third cast with the orange scud the Chernobyl ant displayed a subtle pause, and I lifted the rod to sense a connection with a thrashing twelve inch rainbow trout. I had already chalked Wednesday up to an exploratory skunking, so imagine my delight when I netted the prize rainbow! I recorded a video and snapped a few photos to document my first fish of 2021 and continued my progress upstream. 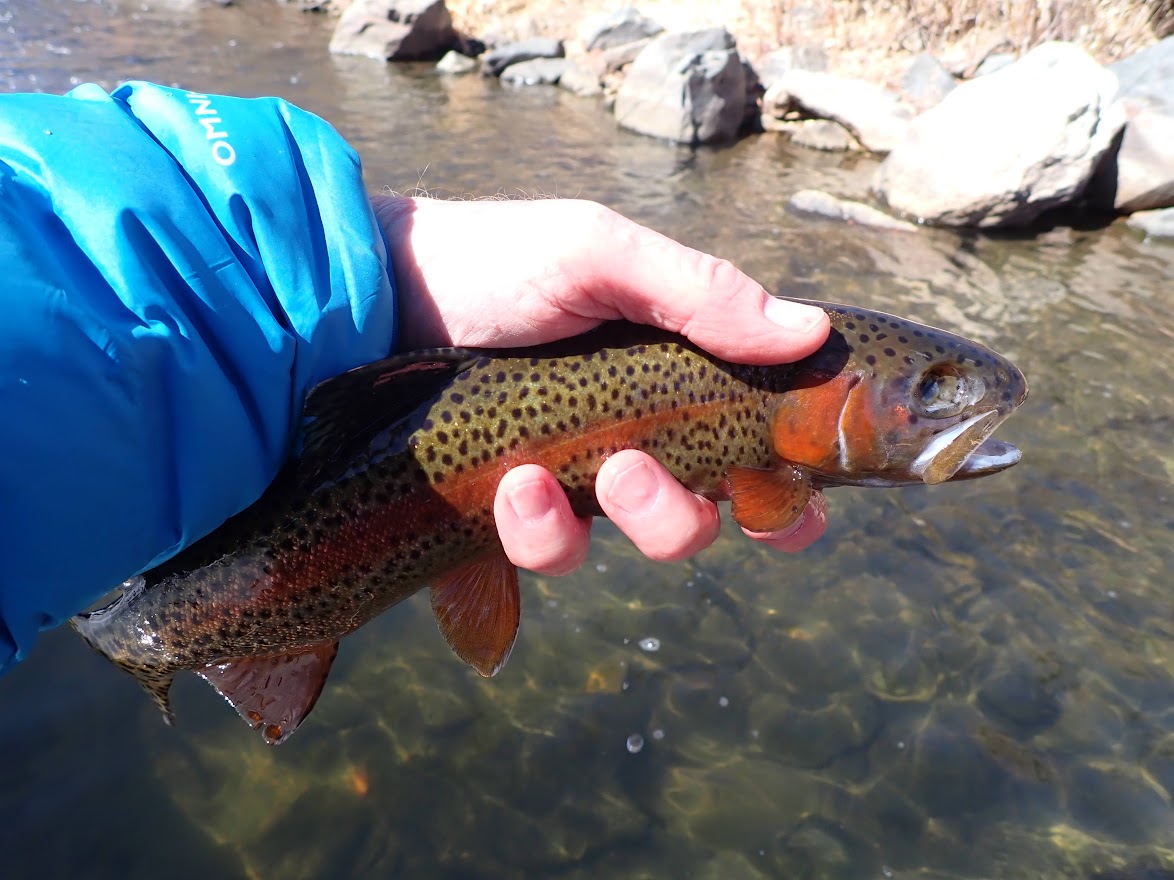 Shortly after my success story I approached another nice open deep spot where the current reflected off the left bank. I flicked a cast to the top of the run, and just as it drifted to the lip of the hole, a trout darted to the surface to inhale the Chernobyl ant. In spite of my state of shock over a dry fly rise early in the season, I managed to set the hook, and I was momentarily connected to a trout. Alas, the joy of hooking a second fish did not persist, as the trout quickly shed the hook and disappeared into the depths. 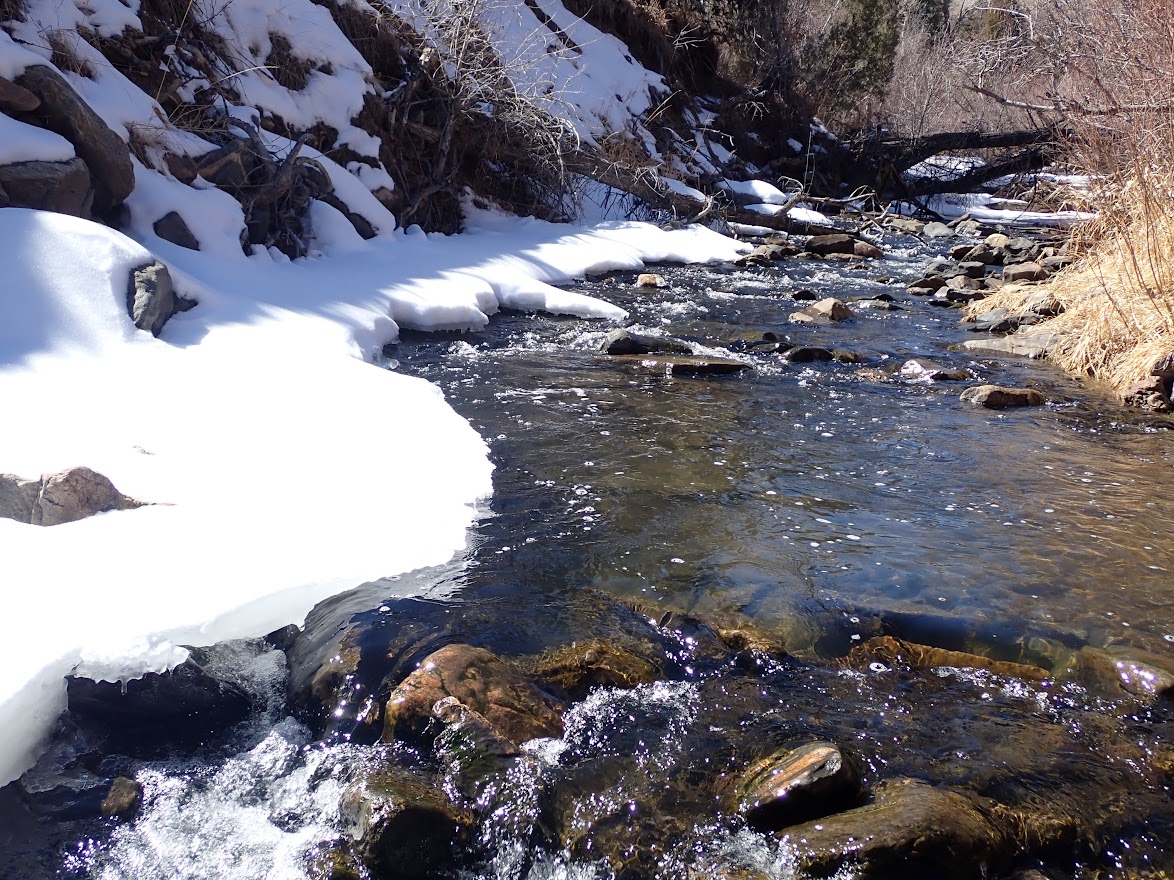 Momentary Hook Up Along the Ice Shelf on the Left

After my two connections I proceeded in a westerly direction, but it wasn’t long before the stream narrowed between steep banks, and this condition prevented the warming rays of the sun from melting the snow and ice covering. The open holes that provided periodic fishing opportunities were nonexistent. I called it quits on Bear Creek and hiked back to the car, where I ate my lunch and then departed for the South Platte River above Chatfield Reservoir.