Angler ineptitude was the theme for my day on Monday, October, 5, 2020. The weather was incredible on October 5 and probably too nice for fly fishing. The temperature when I departed from my parking space along US 50 was 62 degrees, and it probably spiked in the upper seventies in the afternoon. Fortunately, before I left the car, I shed my Columbia long sleeve undershirt and pulled on a short sleeve quick-dry T-shirt. Even with this last minute change I was quite warm for much of the afternoon. The river was very clear and very low. I believe the flows were in the 280 CFS range. I was easily able to cross the river, and throughout the day very few locations were unreachable. In short, wading conditions were ideal. I selected my Sage four weight and crossed the river at the county line and then hiked the tracks, until I reached my usual path to the river. 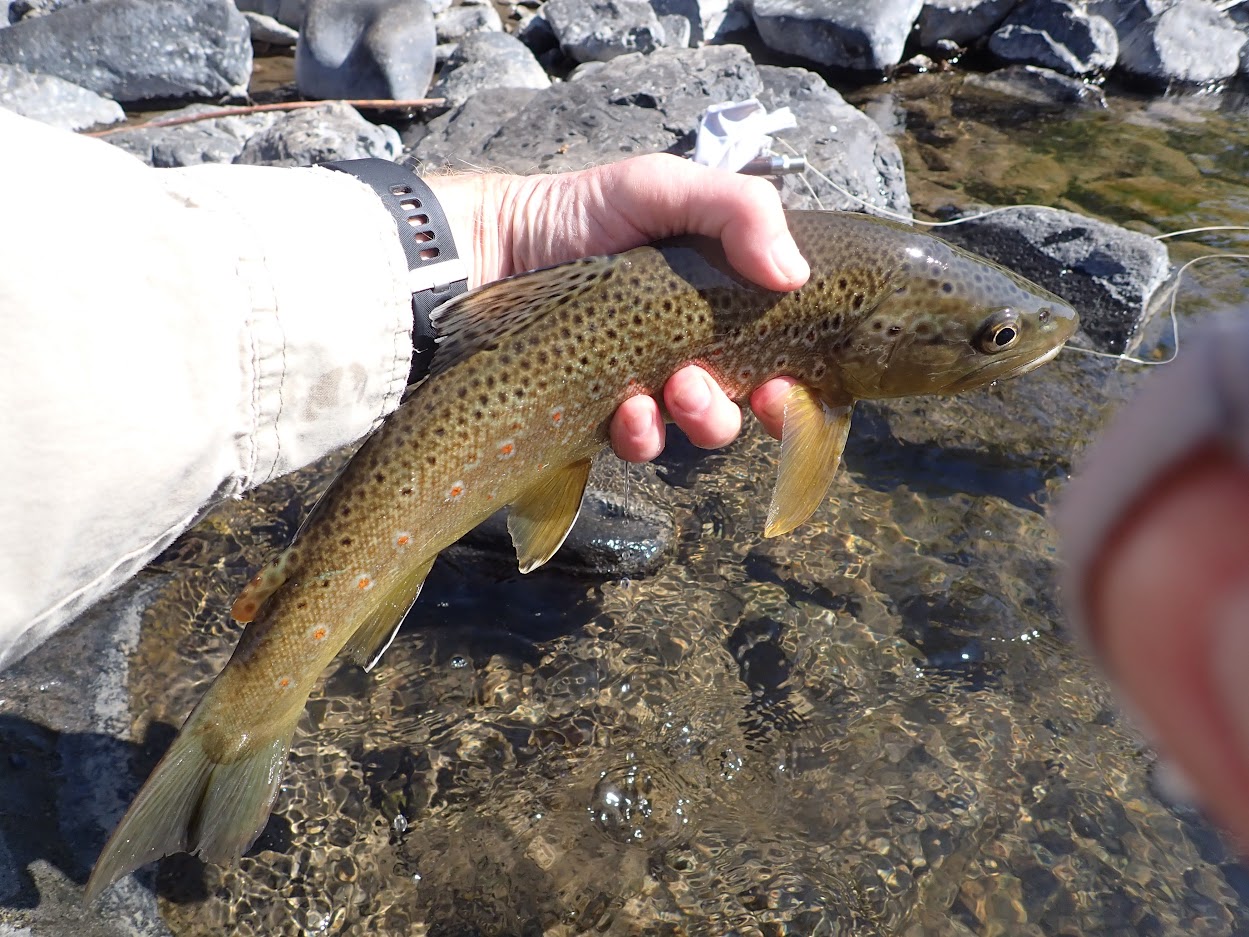 To start my pursuit of trout I tied a tan pool toy hopper to my line and then added a size 16 salvation nymph and a classic RS2. The first fifteen minutes failed to produce any sign of fish, but then a chunky and healthy fifteen inch brown trout nipped the RS2, as I raised the flies in front of a large submerged rock. I moved upstream to the downstream tip of a small island, and some spectacular riffles yielded a look at the hopper and a very temporary connection to a small fish. In a fairly nondescript shallow run directly below the island I looked away for a split second and then raised my rod to make sure it was not snagged. I instantly felt a brief surge of heavy weight, but that was the extent of interaction with a trout, as it charged the opposite direction from my lift and snapped off all three flies. I must confess that I uttered some ugly words, before I reconfigured my line. 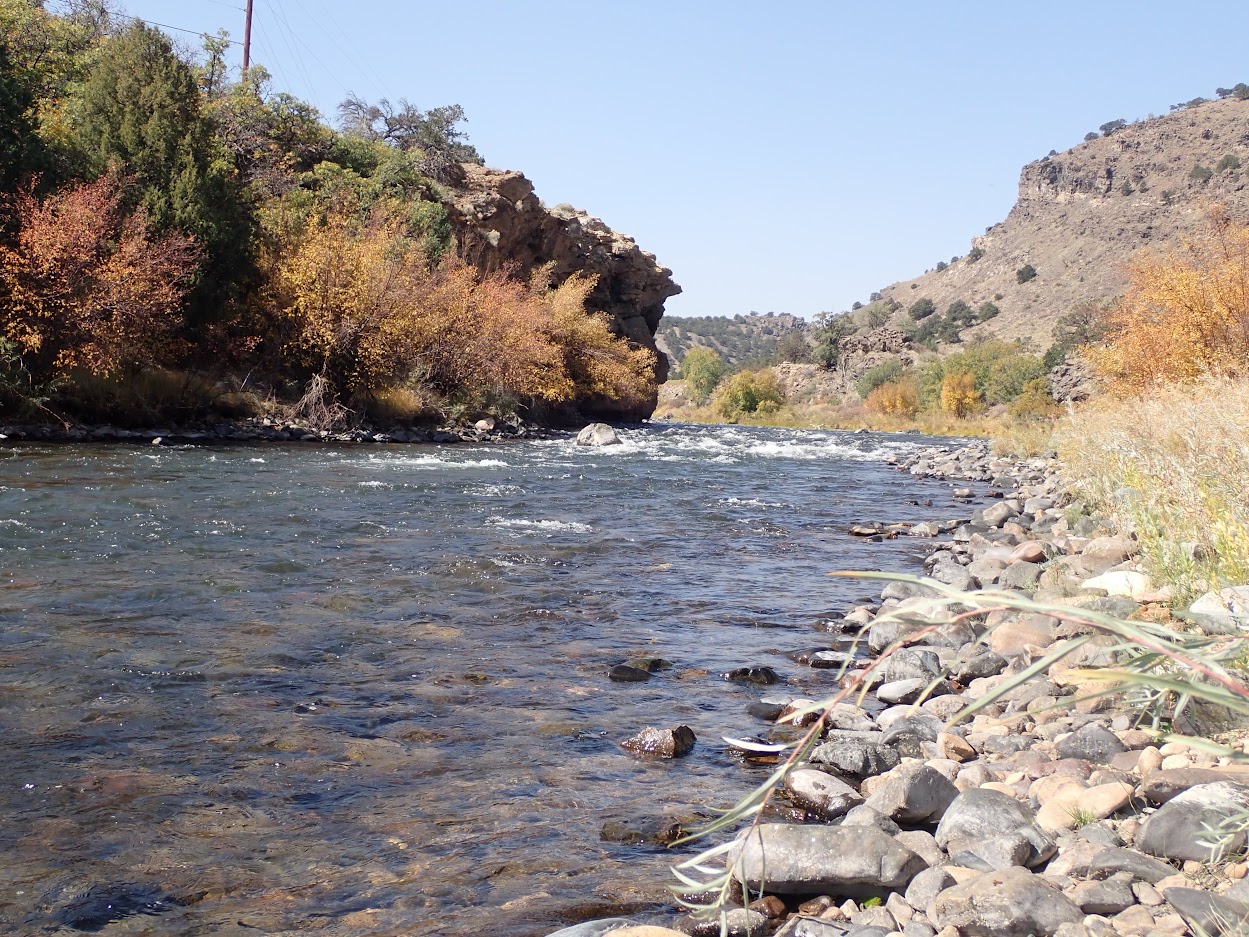 I was at the bottom of the island and anxiously anticipated fishing the small right braid on the north side of the river. The right channel is my favorite stretch of the Arkansas River, and I knew that low, clear flows dictated extra stealth. I knotted a size 14 light olive stimulator to my line and then added a RS2 on a 2.5 foot dropper. The stimulator enabled light, soft presentations, and the RS2 was insurance against an early baetis emergence. Once my fly fishing lineup was prepared I sat on some rocks at the tail of the island and chomped my lunch.

After lunch I prospected some marginal pockets downstream of the large pool on the small north braid, and then I covered the bottom half of the pool. A pair of refusals in the small marginal pockets was the only reaction, that I could muster from the wild stream residents. I was having some success with the hopper/dropper earlier, so I reverted to that approach, although in this case I opted for a pheasant tail instead of the salvation. 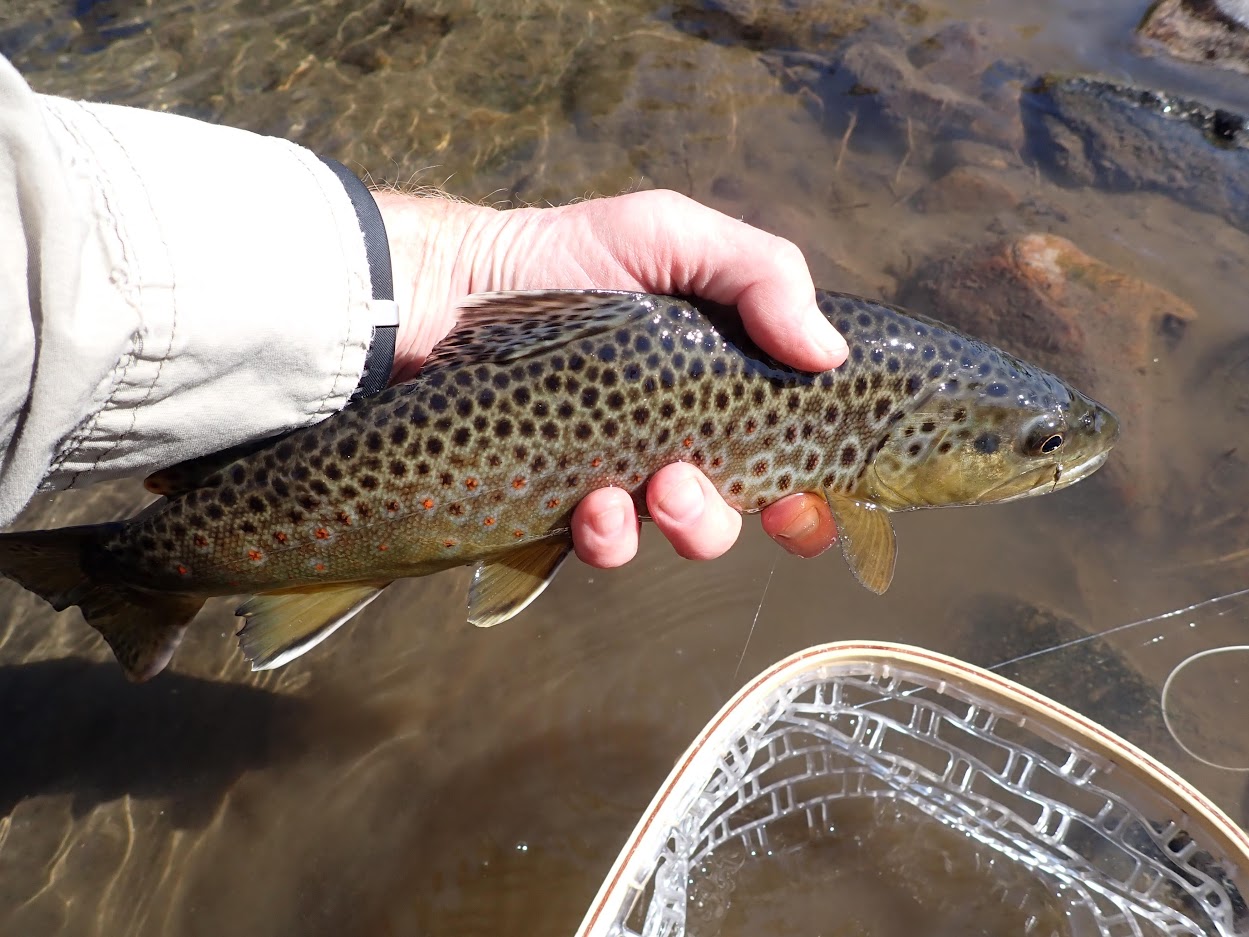 RS2 Victim. Look at Those Spots!

The change was rewarded, as a substantial brown trout inhaled the RS2 in the faster water at the top of the long pool. I continued prospecting the hopper/dropper through the remainder of the right braid and added a thirteen inch brown to the count. In addition I wrestled with a valiant rainbow trout that executed a quick head twist and snapped off the RS2. I replaced the small nymph with a replica, and I proceeded to the upper half of the small river branch. Amazingly in another relatively marginal narrow pocket along the right bank, I spotted a large form as it elevated to the hopper. I reacted with a swift set, and in a short amount of time I realized that I was connected to another substantial brown trout. Unfortunately, as I played the fish closer, I came to the realization that it was foul hooked along the side of the head. I attempted to plane the muscular fish above the river to my net for a quick release, but the knot on the hopper failed, and a trio of flies once again disappeared. Needless to say I was unhappy with this turn of events. I was now down two pool toy hoppers and four RS2’s and feeling unloved by the fishing gods. 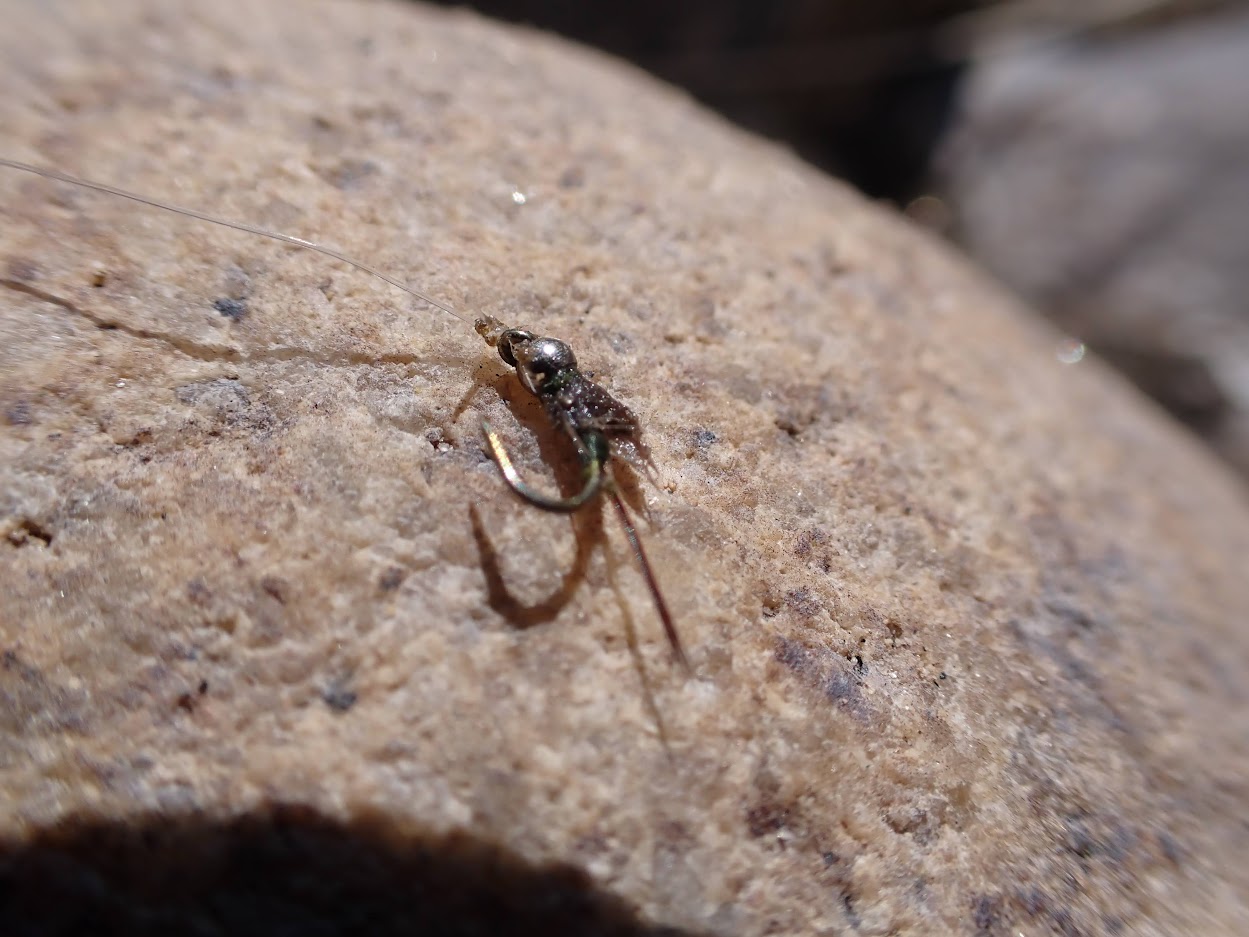 Close Up of the RS2

I was forced to configure my entire line yet again, and I opted for another pool toy hopper along with a pheasant tail and yet another RS2. For the remainder of the afternoon I cherry-picked the most promising spots over .8 mile of river. In the first hour I landed a gorgeous and very fat rainbow and a brown that was less than twelve inches long. The rainbow was the best fish of the day at sixteen inches, and it displayed the RS2 tucked in the thin membrane of its jaw. I also earned quite a few temporary hook ups and a few refusals to the hopper. 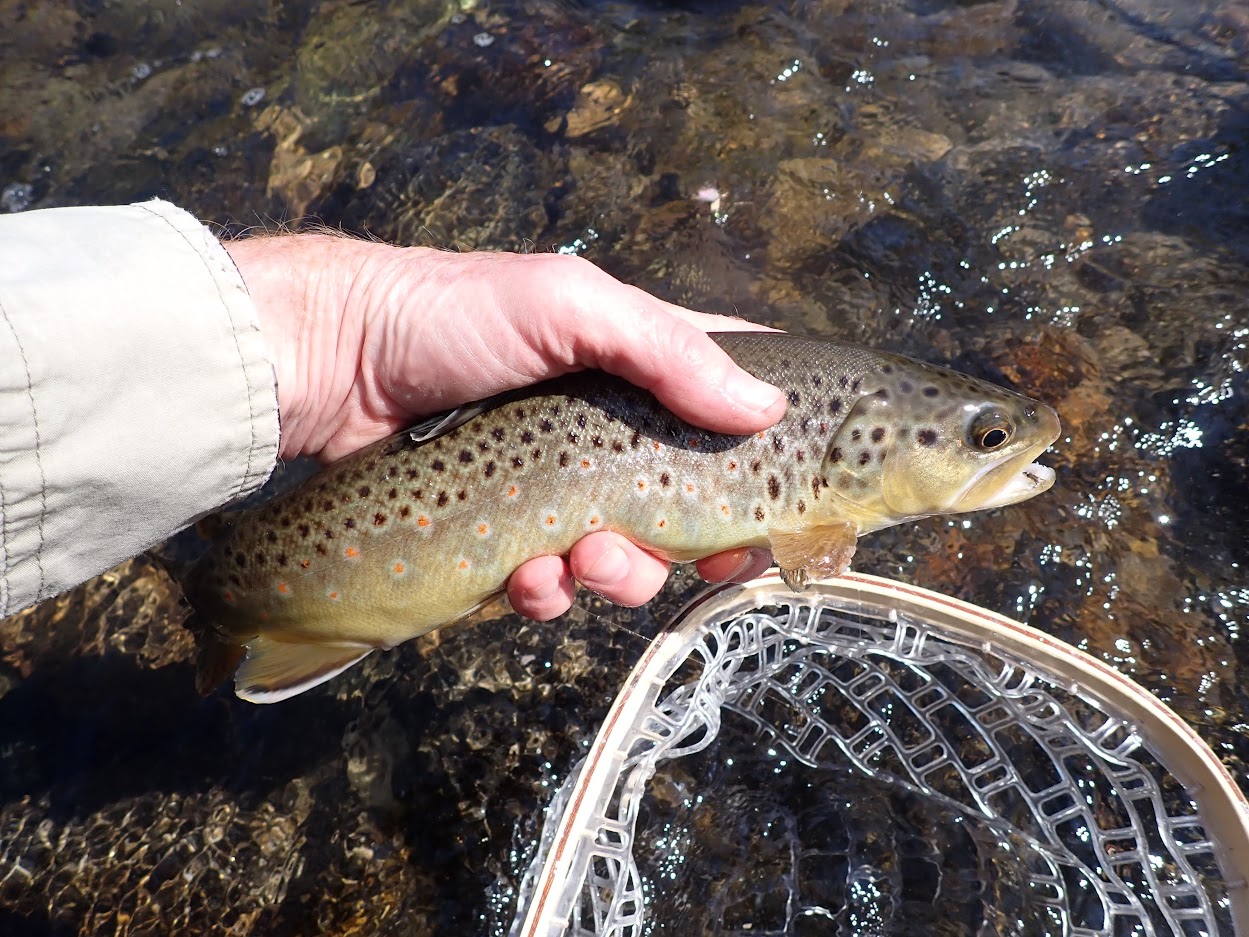 By 2:30PM I endured a long dry spell, and I decided to convert to a nymphing rig with a split shot and indicator. Given the low clear conditions, I decided to introduce my New Zealand strike indicator to the effort, as the small tuft of synthetic yarn created minimal impact upon landing on the water. My New Zealand indicator tool was knotted to a section of old fly line along with my small Swiss army knife. In the process of attempting to form the indicator loop, the old fly line knot broke, and the Swiss army knife tumbled into the river. The knife was easily retrievable from the shallow water, but the New Zealand indicator tool was a different matter. I spent fifteen minutes trying to locate the small bodkin-like device, but I eventually gave up and used a cork style indicator with a rubber band gripper. The entire indicator conversion proved to be a monumental bust, as I never experienced so much as a bump. 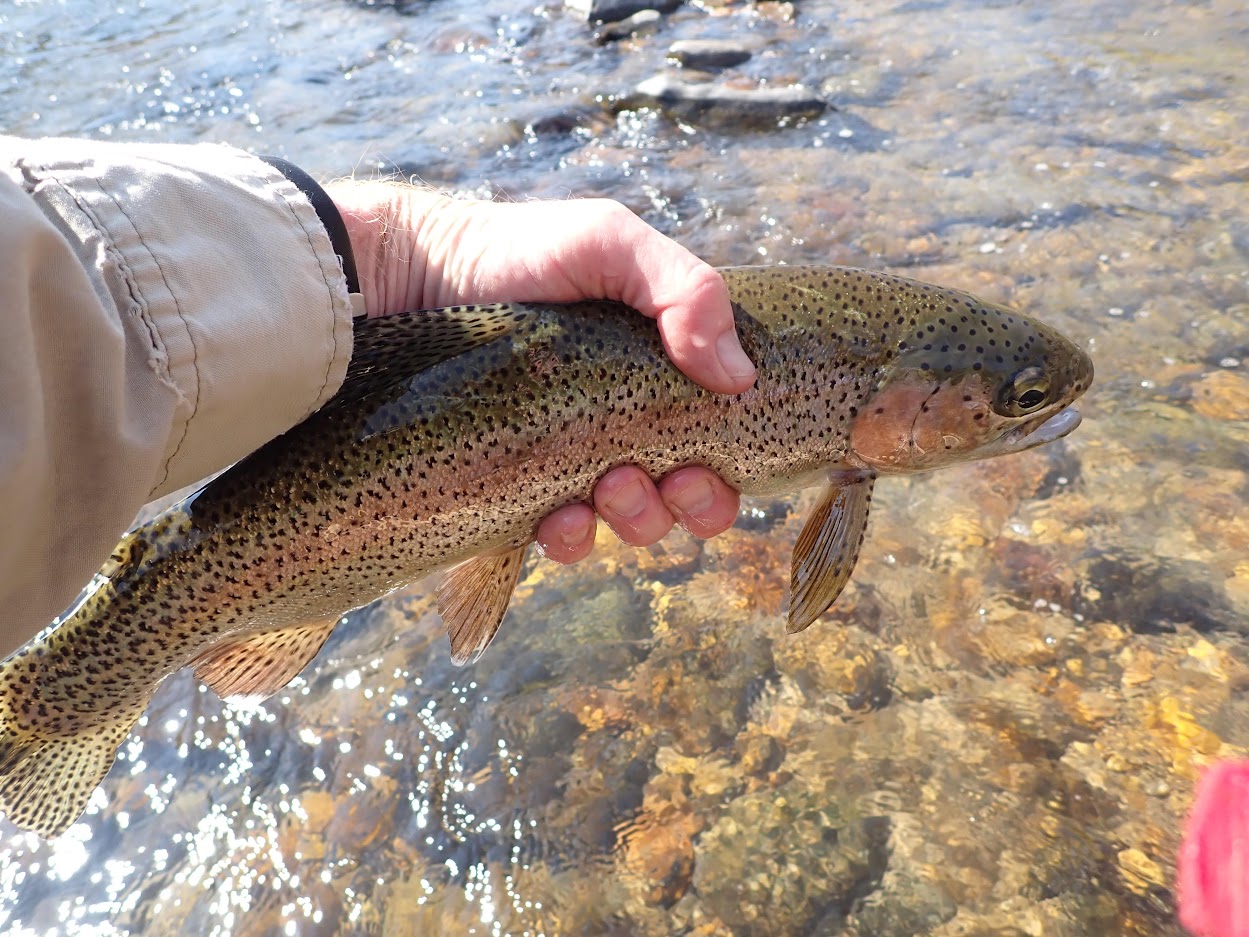 Another Rainbow Shot for Good Measure

After twenty minutes of fruitless casting I converted back to the dry/dropper approach, and on this go round I used a tan ice dub chubby Chernobyl along with a salvation nymph and a sparkle wing RS2. For the last hour I covered a significant amount of river, but the results were dismal, as the fish count was mired on five. During this phase of my frustrating day my knee touched some chollo cactus spines, and I may have created some slow leaks on the left leg of my waders. Also as I was wading, I noticed an object flapping below my left boot. Upon closer examination I realized that the Korker sole had separated and was only held in place by the rubber thong and rivet on the heel of the boot. I was luckily able to correct this situation without removing my boot. 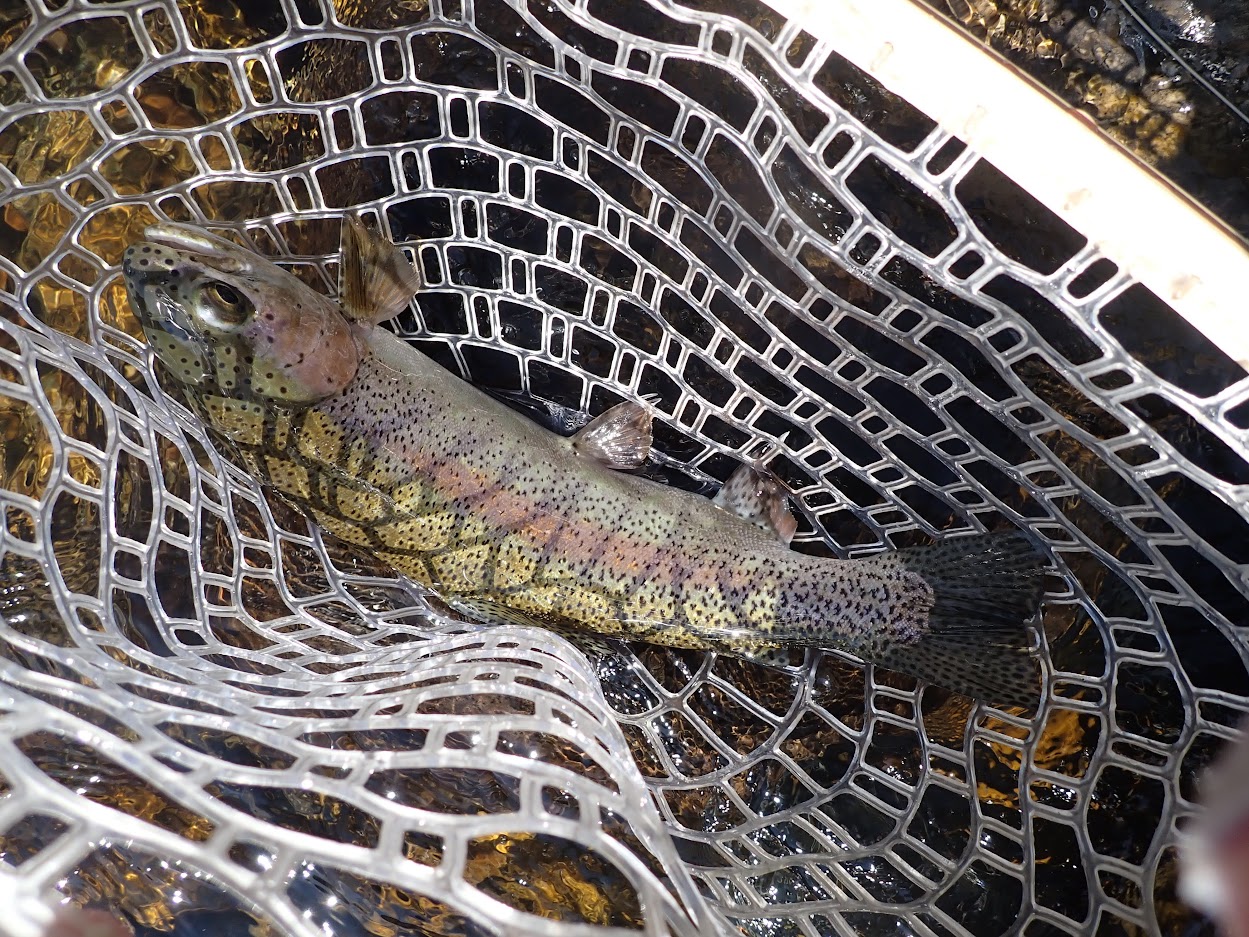 By 4:00PM the river was dead, and I was extremely weary, so I made the .7 mile return trek. Monday was clearly not one of my better days. I lost an abundant quantity of flies along with my New Zealand indicator tool, and I may have punctured my heretofore leak-free waders. Five landed fish is a ridiculously low catch rate, but four of the fish were of excellent quality. Twenty fish days on high mountain streams are haunting my thoughts. Some clouds and overcast skies would be a major positive for fly fishing the Arkansas River. I will keep my eyes on the weather forecast.