A couple days of rest and relaxation at the Timbers Bachelor Gulch Resort near Beaver Creek allowed me to recover from my intense but satisfying four days of camping in the Flattops region of Colorado. A weekend with no fishing had my thoughts turning to my next fishing adventure. I contacted my friend, John, and we decided to undertake a joint trip to the Arkansas River. John owns a small Casita travel trailer, and he invited me to join him in the relative plush accommodations compared to my normal REI two person tent.

John planned to stay for four days; whereas, I needed to return on Tuesday evening to prepare for a trip to Utah to visit my daughter. Consequently I drove separately, and we devised a plan whereby John would meet me on the river on Monday afternoon. I arrived at the pullout at the Chaffee – Fremont County line by 11:45, and after gulping my lunch, I assembled my Sage four weight rod and crossed the river at the tail of the long pool below the parking area. I climbed the bank on the opposite side of the river and hiked down the railroad tracks until I reached my usual entry point. By 12:30 I was in the water casting a yellow Letort hopper, beadhead hares ear, and a RS2.

The fishing reports from the local fly shops indicated that the fishing was decent after the cooler weather that moved across Colorado while I was in the Flattops and at Bachelor Gulch, and the web sites suggested blue winged olive imitations for the late morning and early afternoon. This explained the RS2 attached to my line. I read my blog posts from 2011 when I fished the Arkansas River at the same time of year, and the Letort hopper was productive, so I attempted to repeat the success. 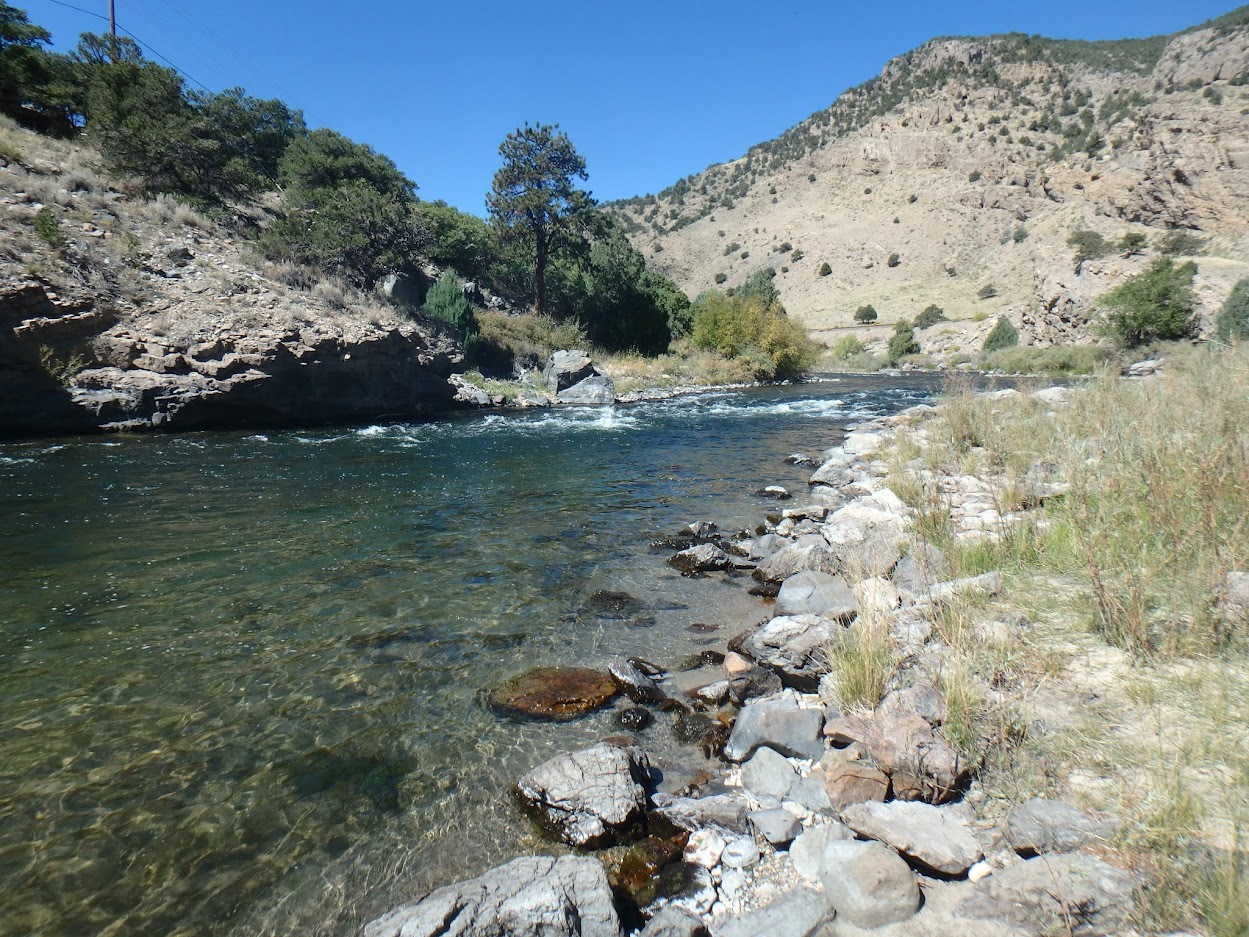 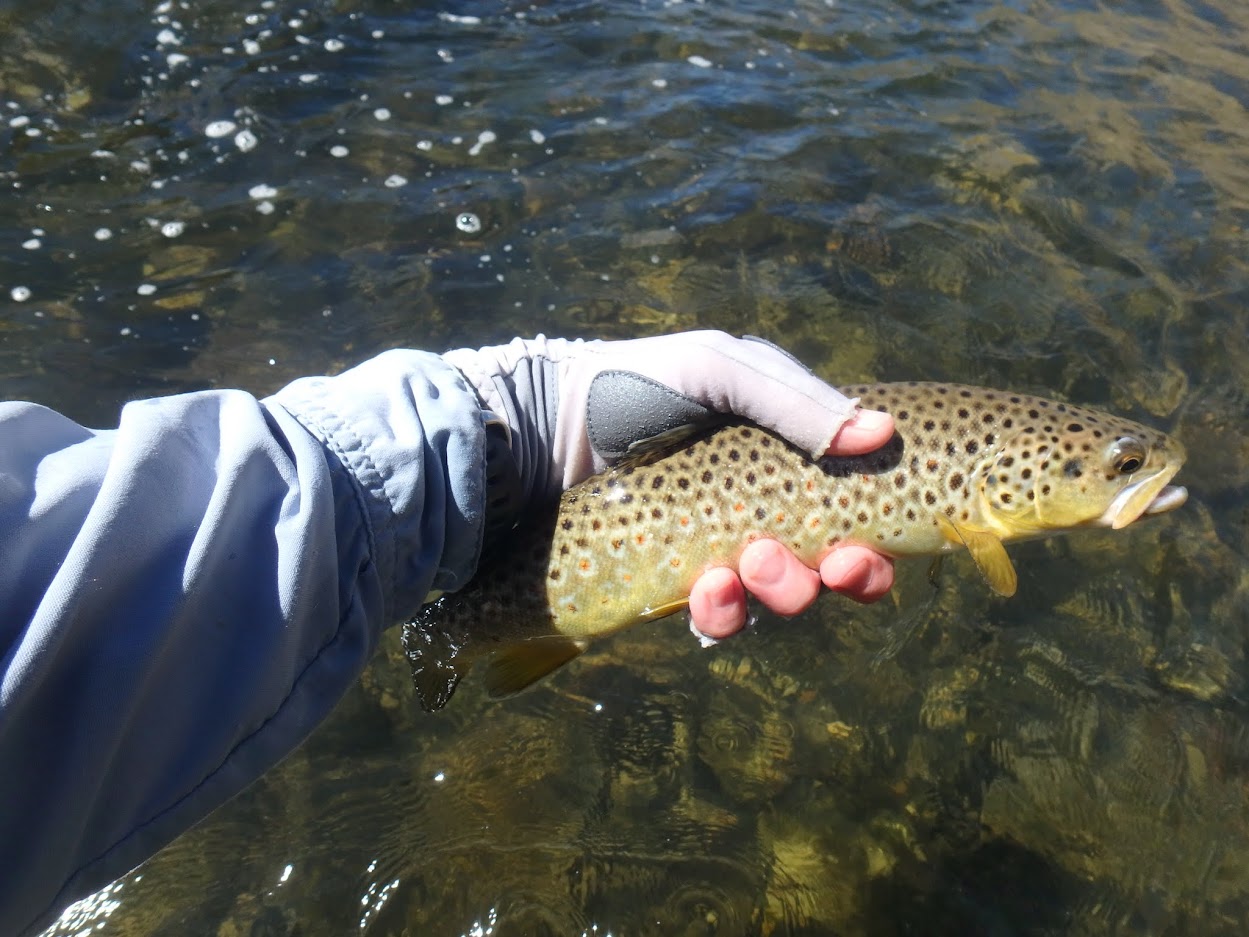 In the faster water below the narrow island I landed three brown trout, and all of them nabbed the RS2, as it drifted in the wake of the hopper. I observed several rises at the top of the juicy shelf pool where I began, so this indicated that the blue winged olives were active. With this auspicious start behind me I approached the bottom of the narrow right channel that flows around the island, and once again I noticed a few rises from likely small fish at the tail of the long smooth pool. I knew the dry/dropper approach was not appropriate for the shallow smooth tail of the pool, so I skipped around it, and executed some long casts to the deep run that flows through the center. On the first cast the hopper paused, and I set the hook and found myself attached to a gorgeous fifteen inch brown trout. I managed to land the beauty despite repeated attempts of escape, and my optimism reached a new peak. 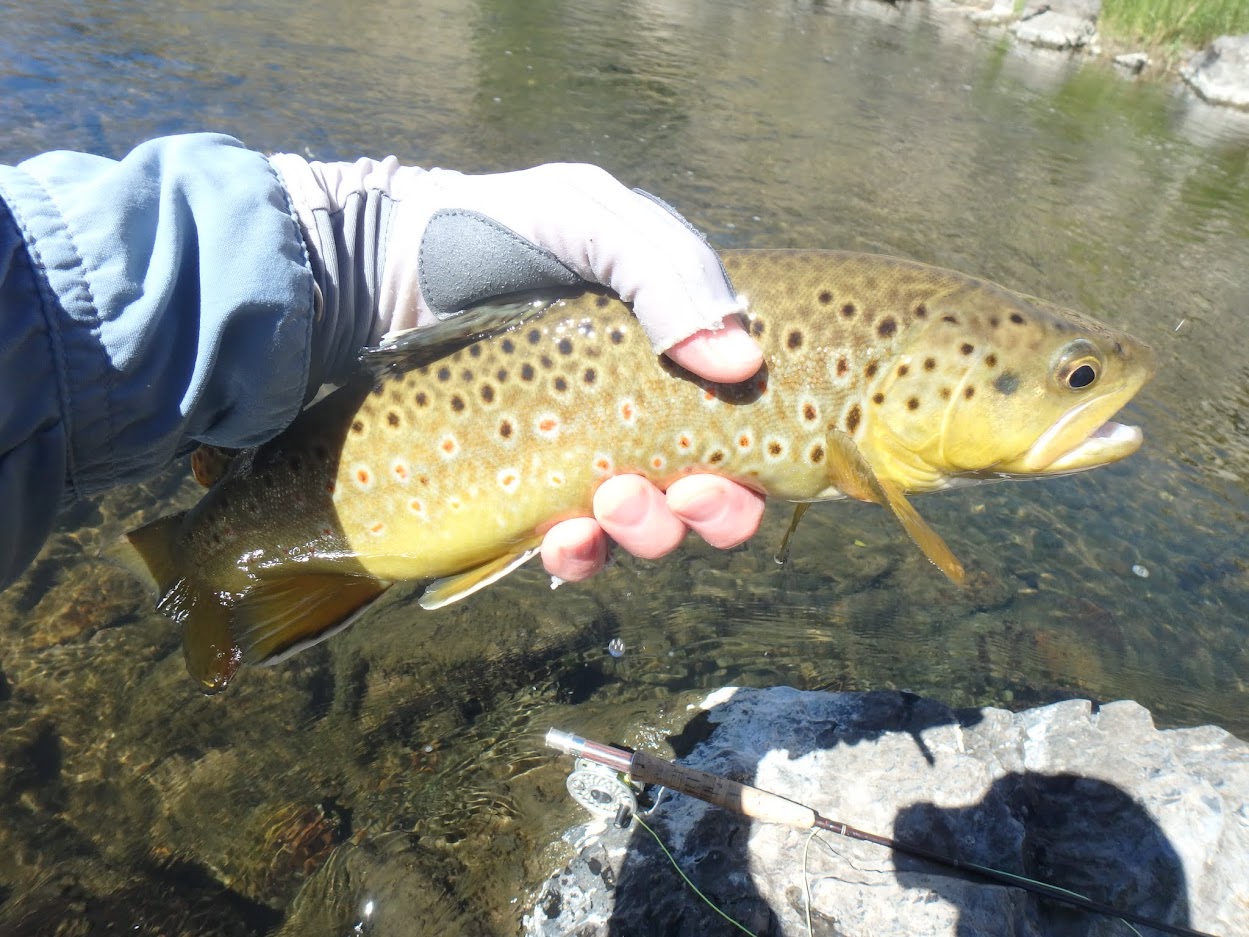 More Poundage on This Guy

The faster runs at the top of the long pool are really the prime real estate in this section of the Arkansas River, and my heartbeat raced with the anticipation of probing my favorite place. Alas, the fish were there on Monday, but I suffered three temporary hook ups toward the center of the deep channel. My momentary elation after landing the fifteen inch brown trout plummeted to new depths. Fortunately I persisted, and another fifteen inch brown trout nipped the RS2, as I lifted near the end of the drift. This trout also generated a spirited fight before I coaxed it into my net. 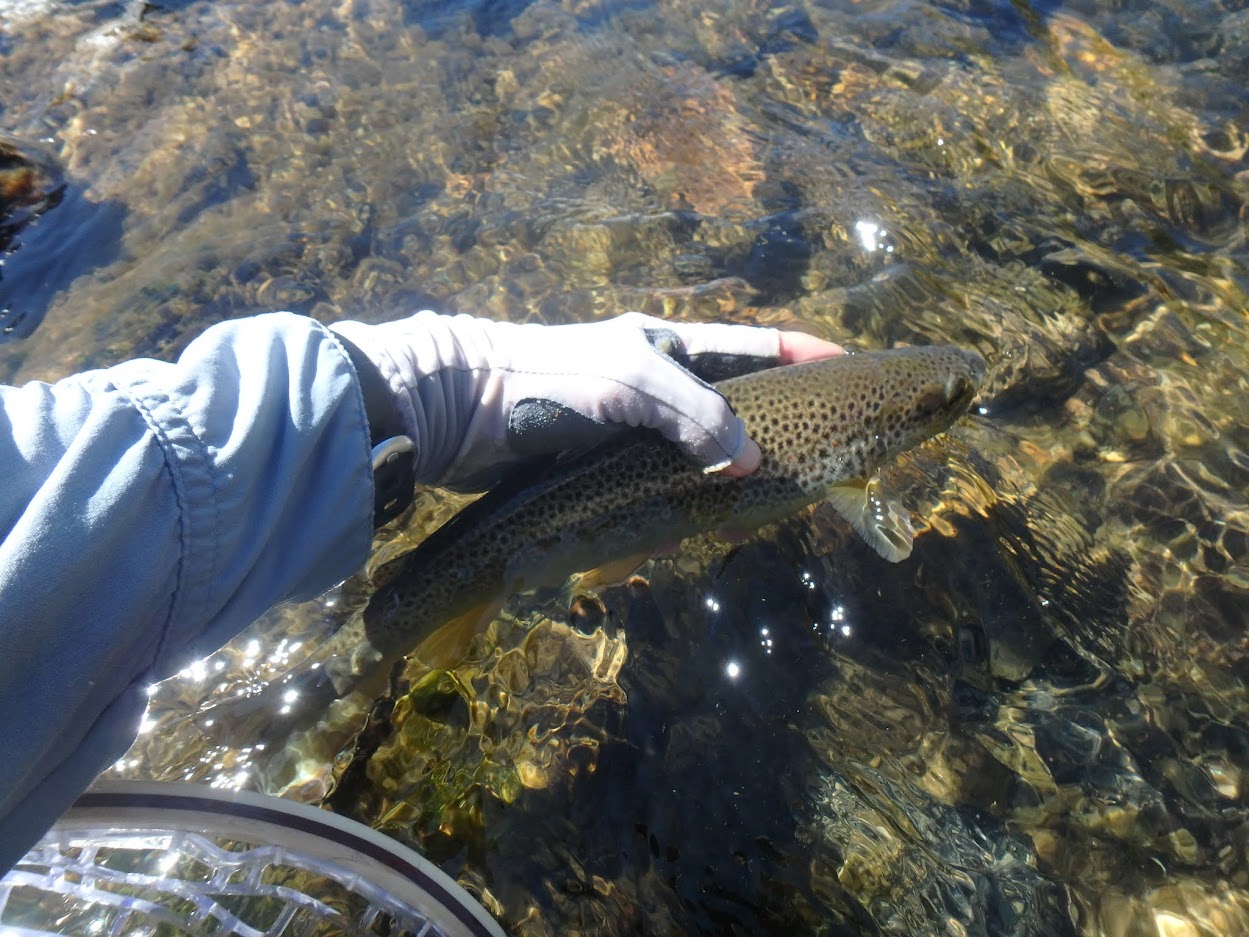 I moved on to the top of the right braid, and I induced two more temporary connections before I reached the top of the island. I was back in the main river now, and I skipped past the wide shallow section in order to quickly reach the long deep riffle with an abundance of deep pockets. I swapped the Letort hopper for a foam pool toy hopper, since I desired better visibility and flotation for the faster water, and I thoroughly prospected the fifty yard section of the river. The difficult wading and constant casting finally paid off, when a rainbow trout aggressively snatched the hares ear from the drift in a riffle that was four feet deep. Unlike the brown trout, the bow streaked across the river and then downstream, but I allowed my line to spin off the reel until the scared fish paused. This allowed me to regain line, and after a five minute battle, I scooped the sixteen inch beauty into my new net. Needless to say I was rather pleased with this reward for a tough couple hours of wading and prospecting. 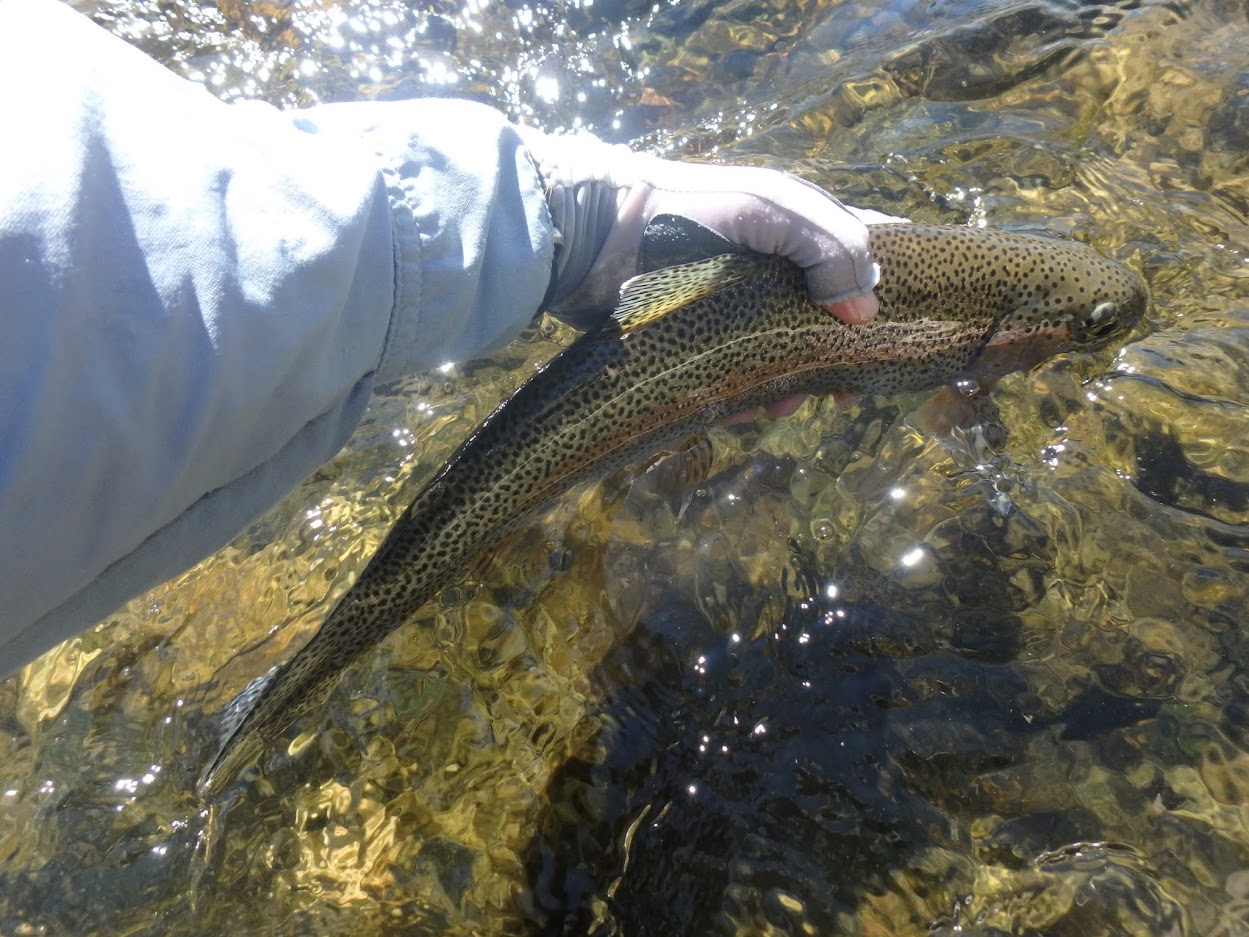 By 3 o’clock the sun was directly overhead and beating down relentlessly on the Arkansas River. The temperature climbed into the upper eighties, and I spotted a black truck parked behind my vehicle high above the river. A car door slammed, and I guessed that my friend John arrived. I was at a transition point in my progress upstream, so I veered to the left, climbed the south bank, and then found John in the river just west of the deep long pool with the high rock overlook. I greeted him, and while he began to cast, I surveyed the river below me. I was pleasantly surprised to spot a very nice rainbow trout hovering just below the surface downstream from John, so I guided and coached him in an effort to position his fly over the prize fish below. 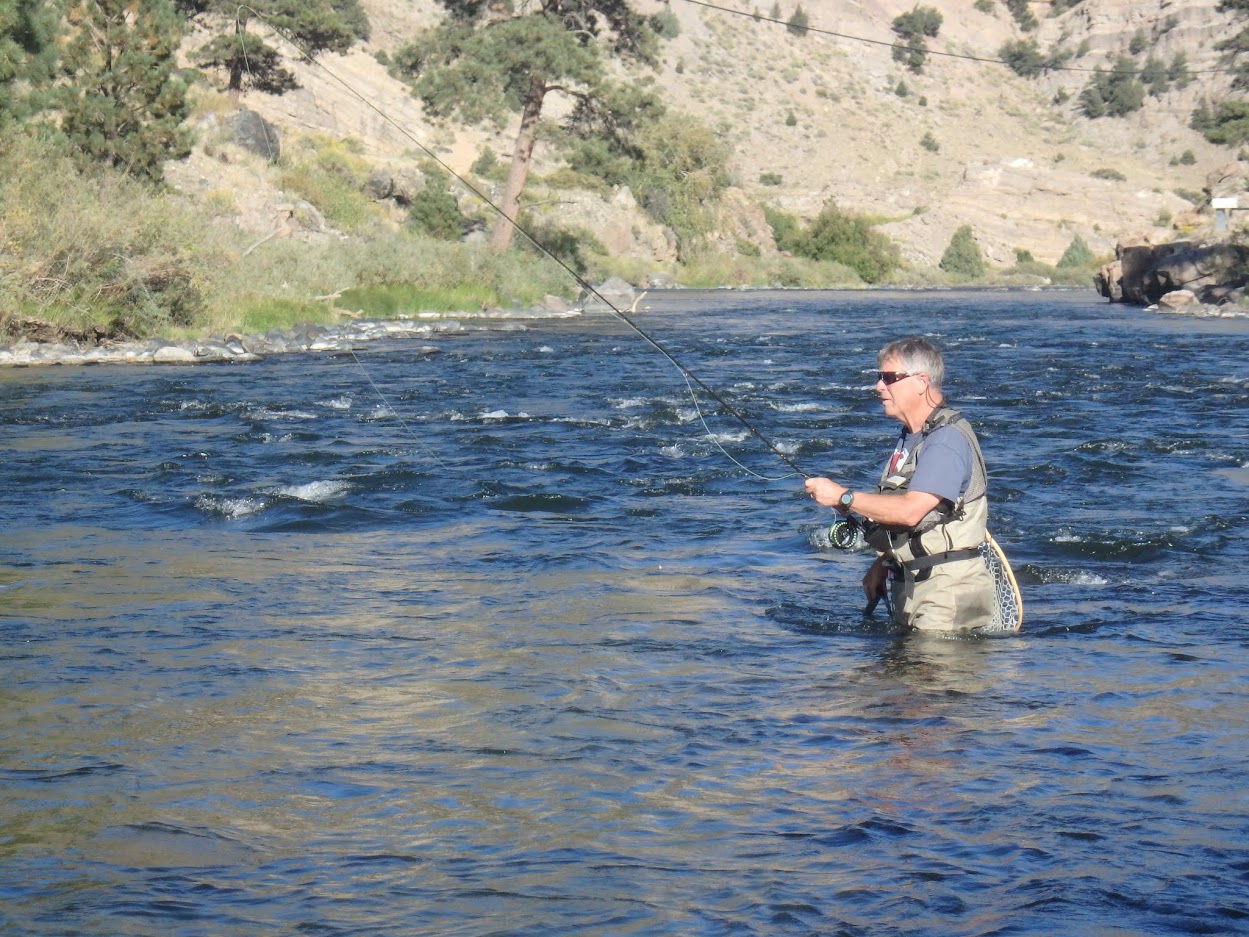 Apparently John’s chubby Chernobyl and RS2 were not favored by the rainbow trout, so we surrendered and moved upstream between three and five o’clock. I was weary from my earlier adventures, so I decided to be a contrarian, and I swapped my floating line for a sink tip and tied a cheech leech to the staunch leader. I spent a half hour stripping the streamer through likely holding spots, but the river was dead. By 4:30 my confidence was at a low ebb, and I sat on a rock and converted into a cheerleader for John, but even this added encouragement could not open the mouths of the Arkansas River trout. I suspect that their state of mind in the late afternoon approximated mine. 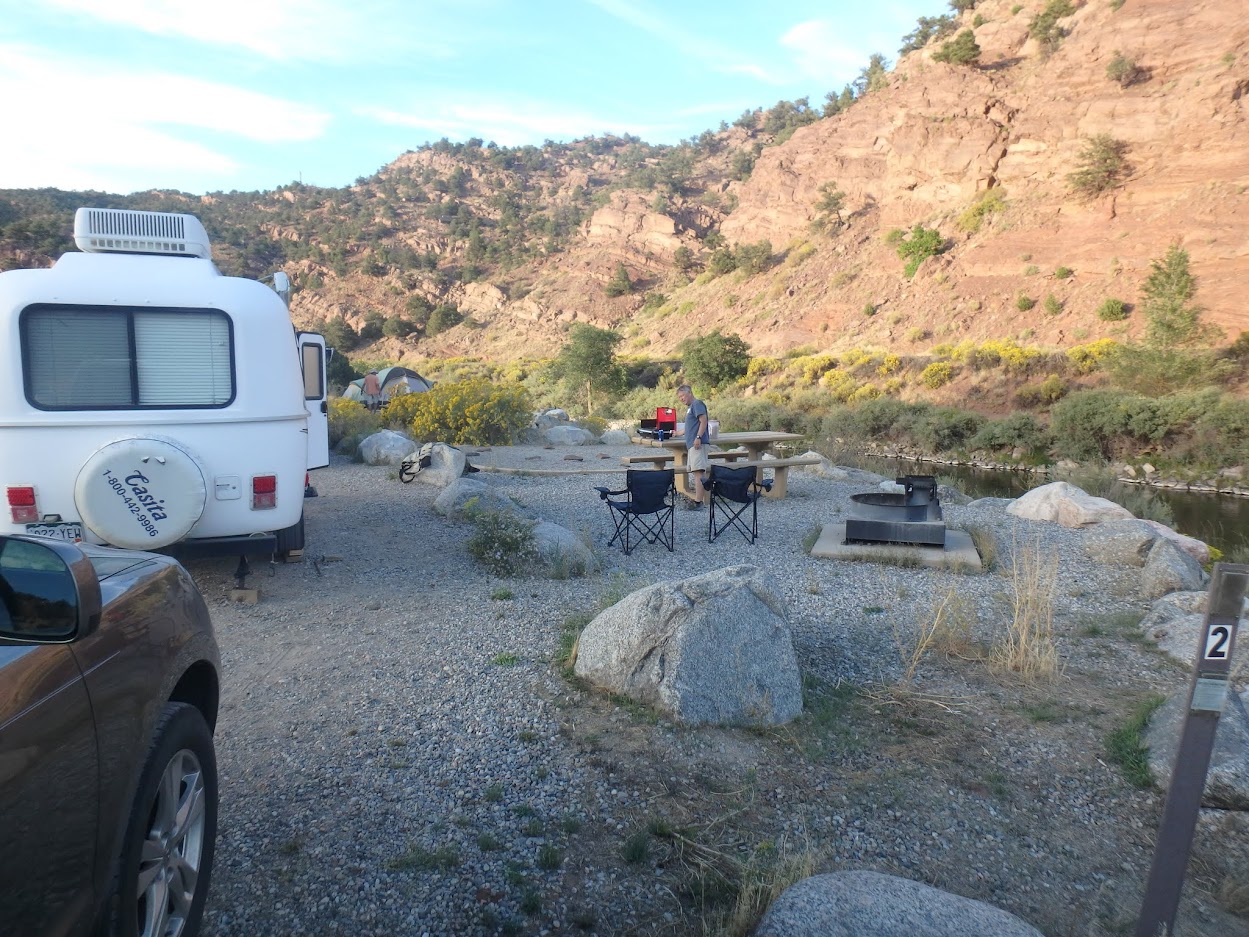 John and the Casita