Tuesday was a day, where persistence and reliance upon recent experience converted a day that was trending toward subpar to a very successful outing. At 11AM I was convinced that Tuesday on the Arkansas River was going to be a bust, but when I returned to the campsite at 4PM, I was glowing with satisfaction. Read on to follow my fishing day and the transformation that ensued.

The temperature in the Buena Vista area peaked in the seventies on Tuesday, and the wind was an intermittently annoying factor. The flows in nearby Nathrop, CO were in the 700 CFS range, and they appeared to be comparable, where I was fishing a bit upstream. I drove four miles and parked on the south side of the tunnels and assembled my Sage four weight rod and pulled on my waders. I debated wet wading, but the sixty degree temperatures at 9:30AM dissuaded me from such thoughts. 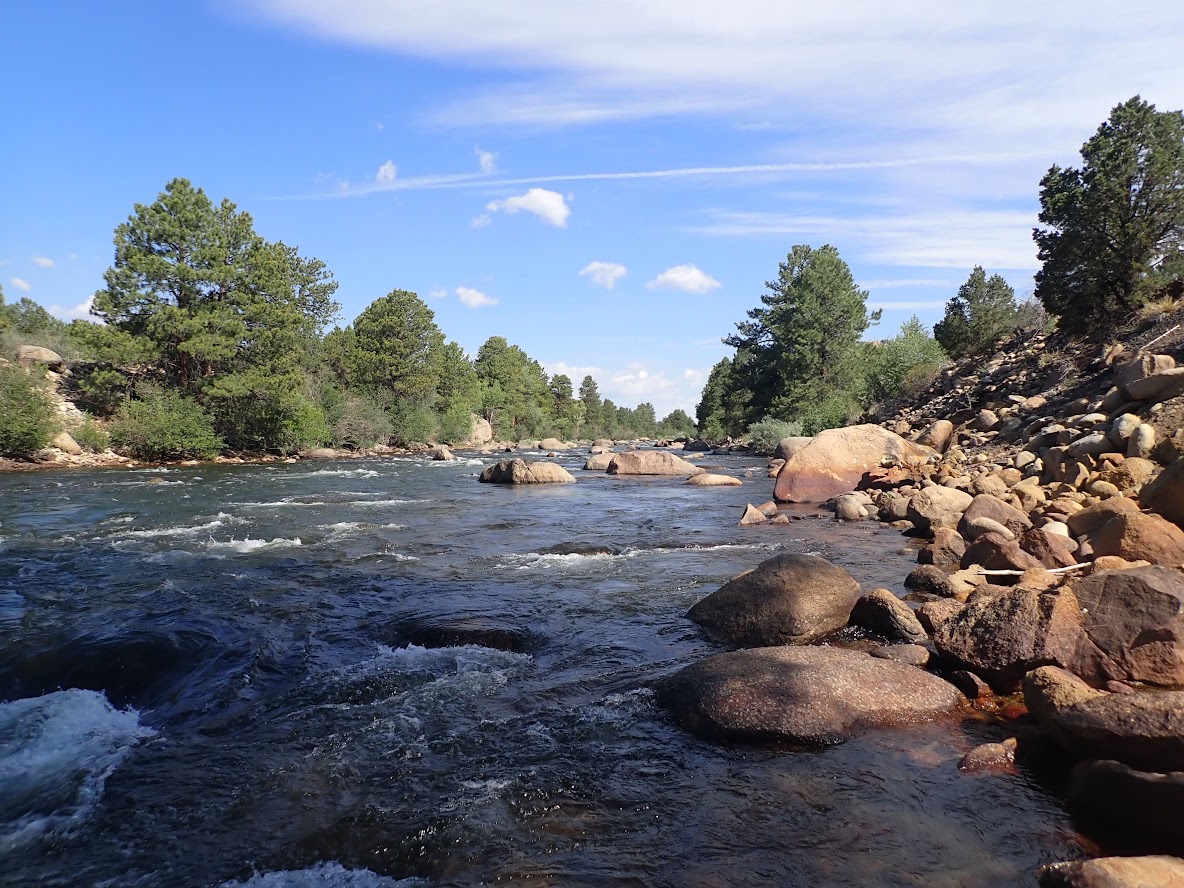 I walked down the railroad tracks for .5 mile and then carefully slid down a steep bank to the edge of the river. The tumbling water looked perfect with relatively fast current in the middle but nice moderate pockets, riffles, and runs in the twenty yards next to the east bank. I concentrated all my attention on this band and ignored the majority of the large waterway. I knotted a tan pool toy to my leader and then added a prince nymph and hares ear nymph. From 9:30AM until 11:00AM I prospected the edge of the river and notched three landed trout; all brown trout in the seven to eleven inch range. The first fish of the day inhaled the hares ear, and then a somewhat larger brown trout slammed the pool toy. 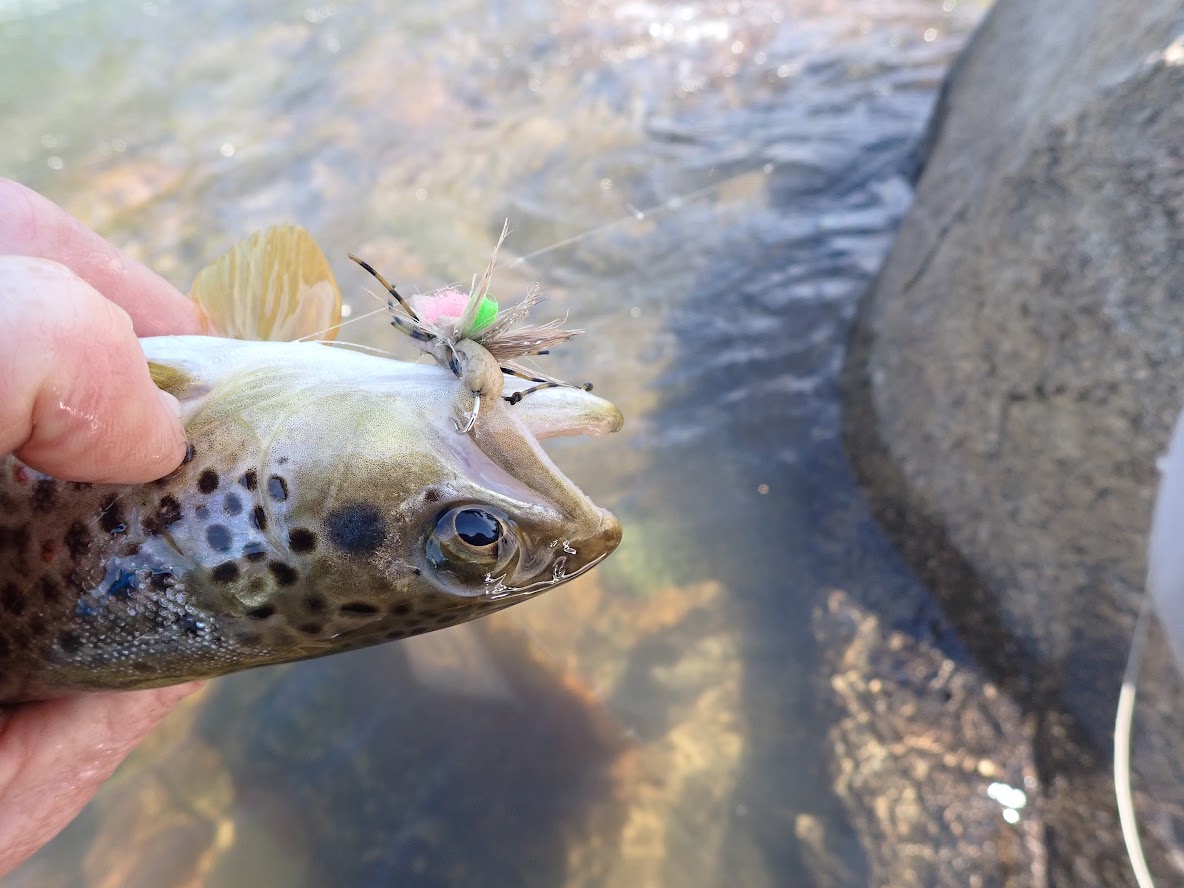 I fished through some very attractive areas with no interest from the resident fish population, and I sensed that perhaps I needed deeper drifts, so I exchanged the prince for a size 12 20 incher. At the same time I swapped the hares ear for a bright green go2 caddis pupa. Almost immediately a brown trout snatched the 20 incher, but then the response was lackluster. During the morning I executed an abundance of futile casts, but I also noticed occasional refusals to the hopper. After thirty minutes I gazed up the river and noted the arrival of another angler. Needless to say I was disappointed by this circumstance, but I made a mental note of his starting point, so I could exit rather than fish in his wake. Apparently my early arrival and distancing from the parking area were not enough to gain open space.

When I reached the landmark that marked the starting point of the other fisherman, I climbed the bank and strode along the railroad tracks, until I was fifty yards above him. I concentrated on the dry/dropper approach until 11:20AM, when I encountered a pair of spin fishermen, so I climbed the cinder bank once again and returned to the campground. My morning had not evolved in the manner in which I anticipated.

When I arrived at the campground, I sat in the car and wrote a note to Jane informing her of my whereabouts under the assumption that she was in the midst of a bicycle ride, but when I reached the campsite, I was surprised to find her reading in her camp chair. In order to enjoy her companionship I retrieved my backpack and lunch and ate at the picnic table overlooking the boat launch. After lunch I departed and relocated to another stretch of the Arkansas River in the tunnels area with the hope of distancing from competing anglers. This move, unlike the morning, was successful, as I never met other fishermen on my side of the river. 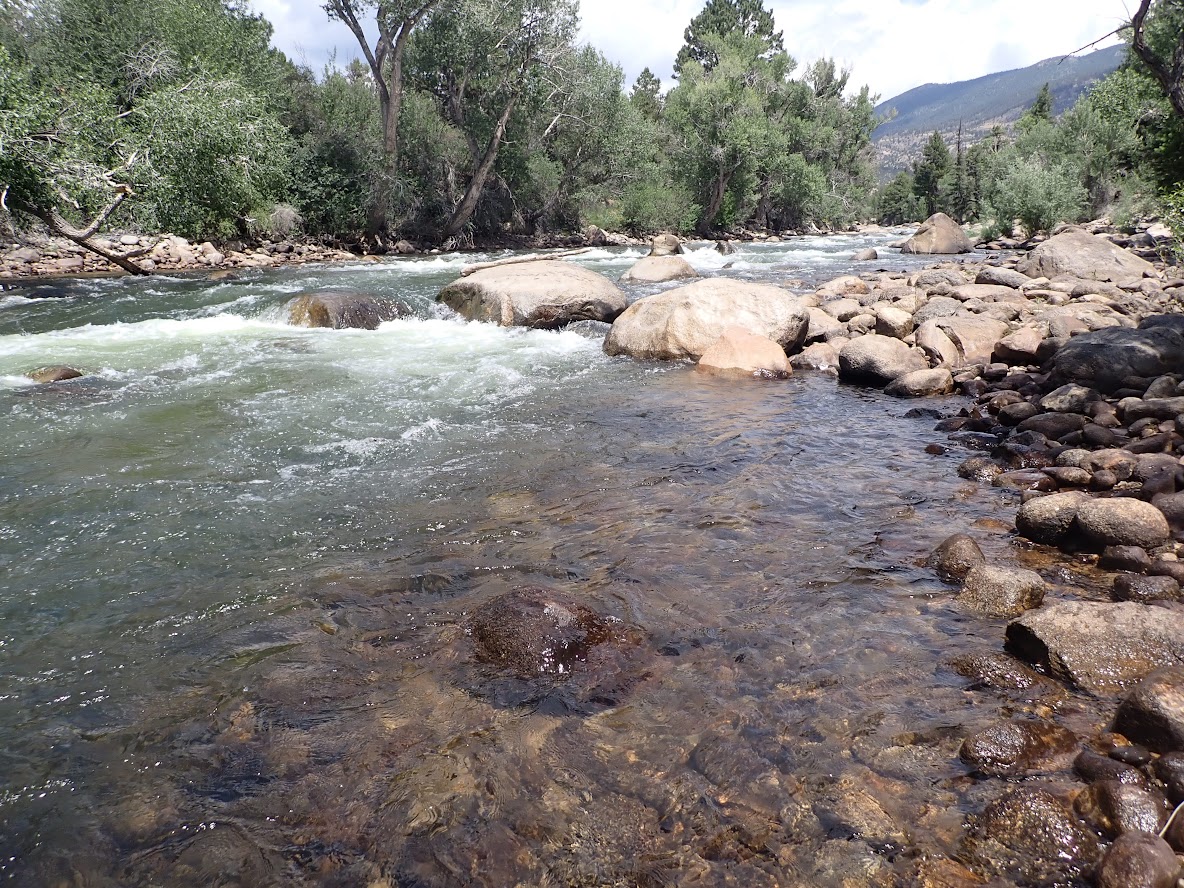 The afternoon session developed in the manner that I expected of the morning. Since refusals to the hopper were prevalent, I decided to try a single dry and tied a size 12 olive stimulator to my 5X tippet. The change worked, when a brown sipped the stimi, but then the bushy attractor fly repeated the act of the pool toy and generated a batch of refusals. What was the key to unlocking this riddle? The only insects evident were small caddis on the streamside bushes, but a size 16 or 18 caddis would be very difficult to track. I pondered the situation and took a page out of my Cutthroat Angler guide’s book, and switched to a double dry. My front fly was a hippie stomper with a peacock body, and a size 16 light gray caddis was the trailer. Whenever I am unable to discern the body color of a caddis, I default to light gray. 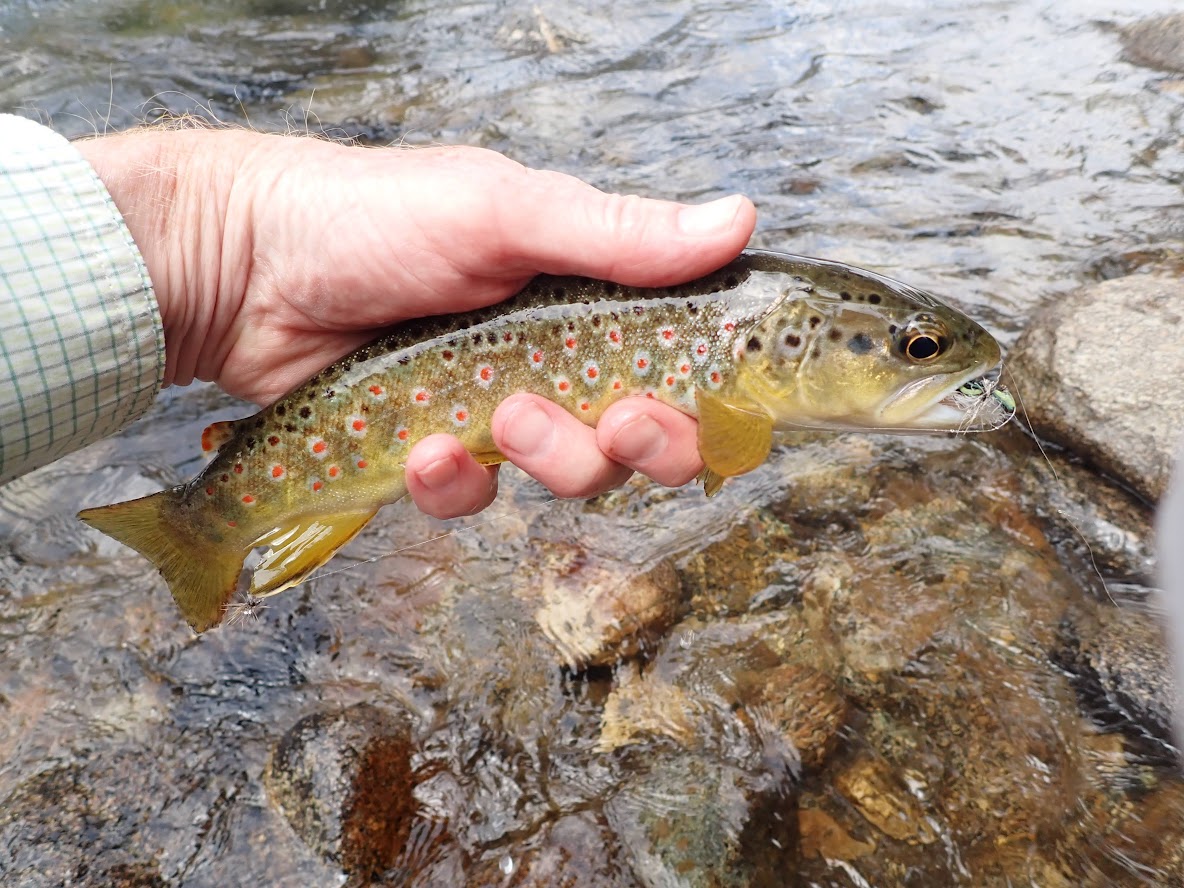 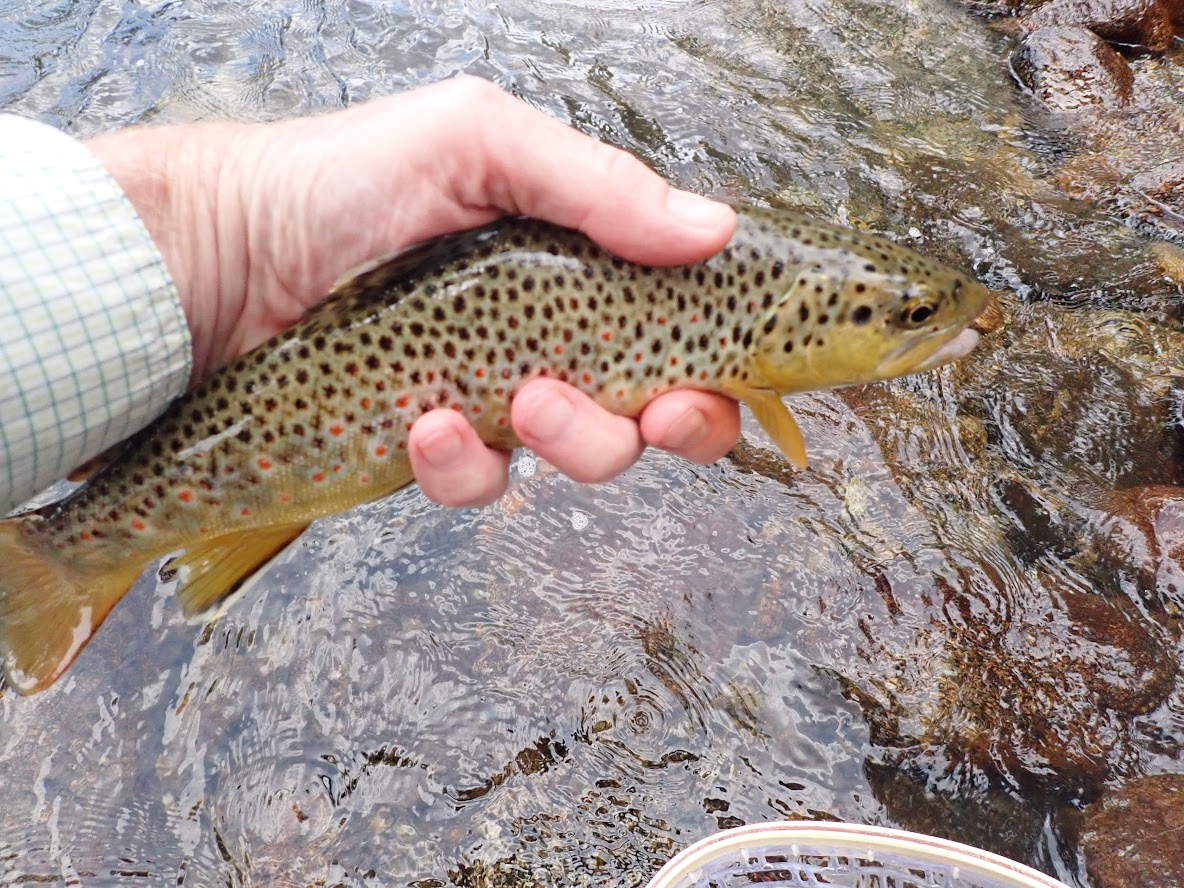 Bingo. The strategy rewarded me, and the fish count mounted from four to twenty-seven, by the time I reached my end point at 4:00PM. I thoroughly enjoyed my afternoon, as I prospected the double dries along the right (east) bank. Locations that previously looked promising but then disappointed began to deliver netted fish. Initially the trailing caddis was the popular target of feeding fish, but as the afternoon progressed, the hippie stomper came into its own. The double dry method produced twenty-three trout, and ten smashed the hippie stomper, while thirteen favored the caddis. 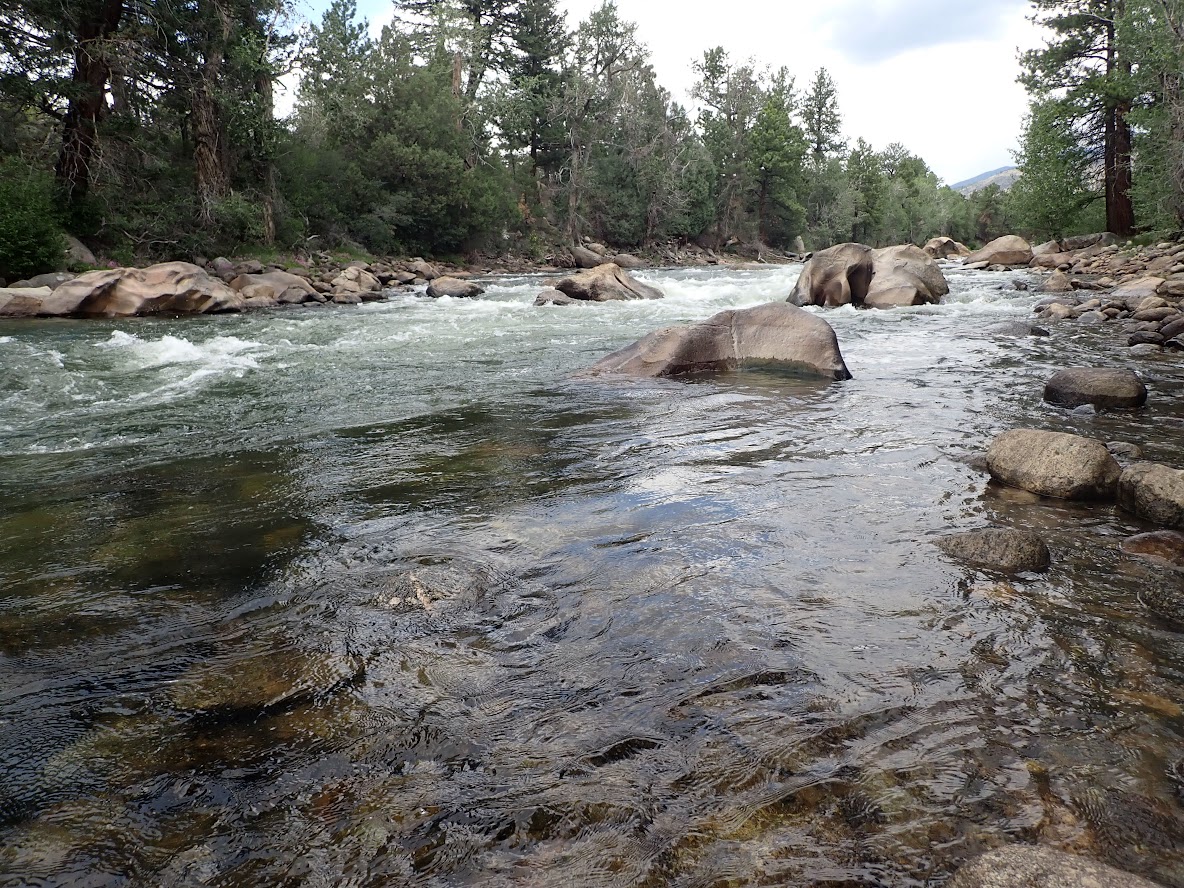 Tuesday afternoon on the Arkansas River was exactly the fast paced action that I crave. I found a new stretch of river to explore, and I hope to return during the 2020 season. I learned to be flexible, and abandoned my favored dry/dropper technique for a double dry, and the results were impressive. I also observed and learned from my recent guide trip, as fly fishing is a constant adaptive experience.