On Saturday of Fathers’ Day weekend Dan, Jane and I had great fun as we took two separate mountain bike rides, enjoyed lunch in Westcliffe while watching a storm develop, hiked the Rainbow Trail south from our campground, and fed the donkeys and horse that occupied the pasture by the entrance to the campground. Jane prepared a great meal of Thai green curry for Saturday evening, and Dan constructed another great fire in the pit at our campsite.

The plan for Sunday was to have a hearty breakfast and then break camp. Jane would drive the Santa Fe back to Denver while I transferred my fishing gear to Dan’s car so we could fish on the Arkansas River again. I decided to revisit the same area where I’d had success on Friday, as I felt it offered the best hope for Dan to have a great day as the braided area spread the flows out and the weather was forecast to be in the mid to upper 90’s again.

Dan was using his new Beulah fly rod for the first time so he was anxious to test it out. Sunday was another very hot day as high temperatures climbed to the mid-90’s, and we started fishing around 11AM just as the sun climbed toward its peak in the clear blue sky. We parked across from the spot where the river divides into three channels and waded across the first two to reach the bottom of the north branch. I gave Dan two lime green trudes, one size 16 and one size 12, and he began fishing up along the right side while I took the left. I started with a gray parachute hopper with a beadhead pheasant tail dropper. 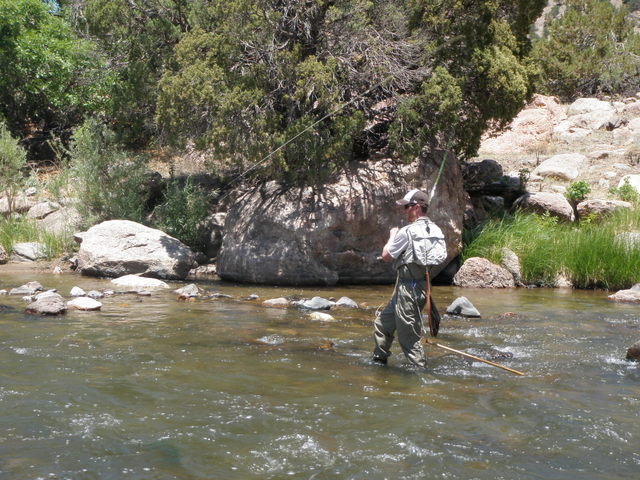 Lifting for Another Cast

It didn’t take long before I experienced a refusal to the hopper and then a brief momentary hook up with the pheasant tail. My optimism proved to be premature, as I went through a dry spell. Meanwhile Dan was getting some action with his lime green trude, so I switched over to the same fly. Eventually I landed a fish or two on the lime green trude before we broke for lunch at 12:30. By lunch we had fished the length of the north braid from its confluence with the main Arkansas up to the point where another short channel joined.

After lunch I suggested we continue on the north braid from the point where the short channel joined to the point where the flow split off from the main river. This stretch contained some faster water with more pockets. I felt that this water would be more oxygenated and the faster riffled current would make it easier to approach fish in the hot afternoon with virtually no cloud cover. The green trude ceased to produce as it had earlier, and I really wanted to work nymphs through the short pockets so I tied on a buoyant Chernobyl ant and added a long leader section of three feet with a beadhead hares ear on the point. I mentioned to Dan that I hadn’t fished the beadhead hares ear as much early in the season as I had in previous years and concluded I was overanalyzing. Dan on the other hand had been fishing a beadhead hares ear since near the start and had landed his two fish on it.

Shortly after making the switch I landed a decent brown that smashed the nymph. In another short pocket I spotted a brown as it flashed up to look at but reject the Chernobyl ant. Two drifts later the same fish snatched the BHHE as it moved through the tail of the pocket. After releasing the fish I lobbed another cast to the top of the pocket and let it drift along the current seam and noticed another flash toward the Chernobyl. Once again on a subsequent drift I hooked but then lost the same fish. 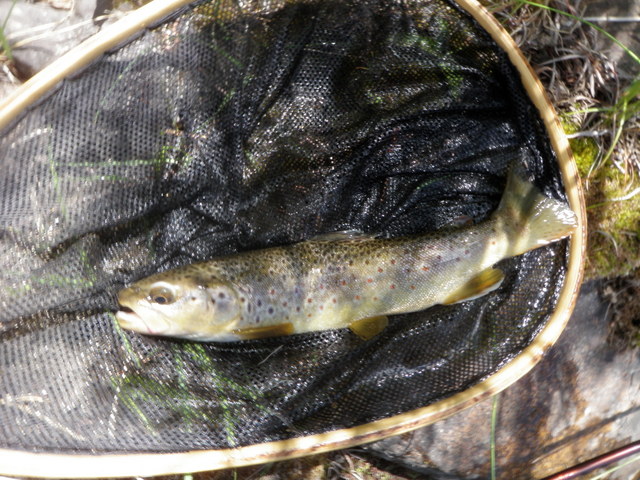 The best action of the day would take place in the hour after lunch in twenty yards of pocket water between the junction of the small braid and part way to the main river. I landed an additional four browns in the 10-12 inch range on the beadhead hares ear. The remaining thirty yards of water were narrower and offered fewer prime holding locations. I covered this water fairly quickly with no luck and reached the junction with the main river. There were some nice deep pockets here, but I couldn’t entice any fish to grab either of my flies. Dan was forced to move to the bank I had just fished because the water was quite fast and tight to the north shore.with thick shrubs reaching out over the water. 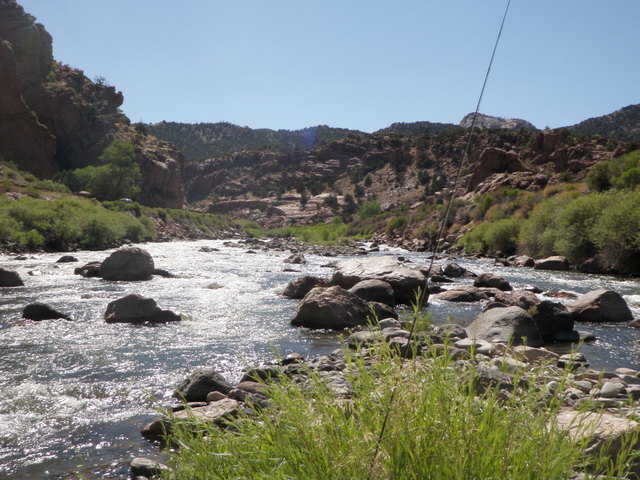 When Dan caught up to me it was approaching 4PM, and we were both extremely hot and tired and thirsty so we waded downstream along the edge of the larger channel to a point across from a small bridge. We were able to cross over here and walk the short distance back to the car. Our day ended with eight total fish landed, six by Dave and two by Dan. We both enjoyed breaking in our new rods and felt that we were fortunate to catch what we did under vary difficult conditions of clear skies, high sun, and warm air temperatures. 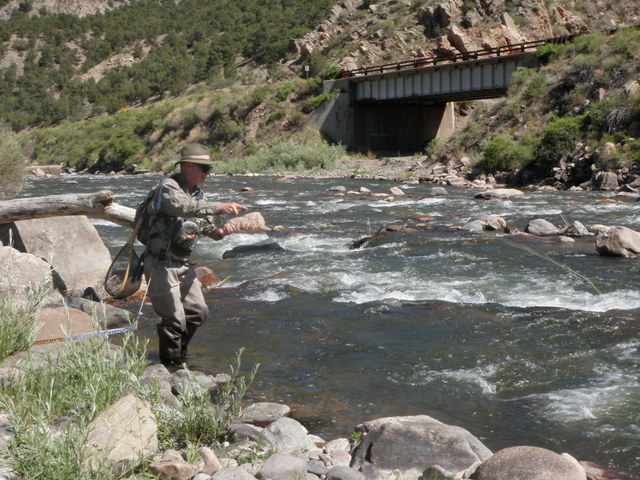