Last year in July Jane and I stumbled into a great campground in Colorado called Alvarado Campground. Alvarado is in the Wet Mountain region of Colorado west of Pueblo and east of the Sangro de Cristo range. We had often read of Westcliffe, the small town at the center of the region, and hoped to visit some day. Last summer the run off extended to late July so I was willing to camp in this area even though there were limited fishing opportunities as just about all rivers and streams were high and unfishable. We actually planned to camp at Lake Creek Campground, a smaller place closer to Canon City, but when I reached the turn off there was a large sign saying the campground was closed due to a wildfire. I switched to plan B and drove further south to Alvarado. We enjoyed a great weekend hiking and biking the Rainbow Trail and browsing the shops in Westcliffe on Sunday morning.

Fast foward to 2012 and I had it in my head that I wanted to return to Alvarado in June during runoff to enjoy mountain biking on the Rainbow Trail. I went the the National Forest Service web site to reserve a campsite for Fathers’ Day weekend and discovered that the campground was closed until June 29 to allow time to clean up massive quantities of blown down trees from the week of extremely high winds. This forced me to make a 180 degree reversal, and we targeted Lake Creek, our original July 2011 target destination. Lake Creek, however, does not take reservations and only contains twelve campsites. I planned to not work on Friday, load the Santa Fe with all the camping gear, food and bicycles and travel to Lake Creek and secure a campsite early before the after work hordes arrived. Jane and Dan would then leave Denver after work and join me on Friday evening. 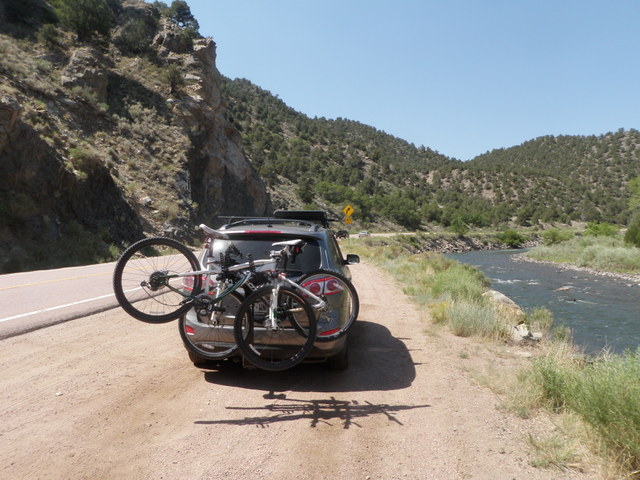 As it turns out, the runoff on Colorado rivers in 2012 is minimal and the Arkansas River flows are at levels usually seen in September, so I planned to stop and fish on my way to snagging a campsite. I loaded the car and was able to depart our house in Denver by roughly 8:30AM. Traffic was heavy in several locations, but I was on the stream fishing by roughly 11:30. I chose the large pullout just up the river from Pinnacle Rock access area where the main river divides into multiple channels, and I enjoy the smaller stream conditions this creates. After putting on my waders and rigging my new four weight rod, I hiked down route 50 to a stretch with a high cliff where the river churned through a narrow chute. I tied on a yellow Letort hopper and dangled a beadhead hares ear and began working the narrow pockets tight to the bank.

I covered quite a bit of water with no action so I began switching the dropper until I tied on a  copper john. Taylor Edrington had mentioned that a copper john imitates the nymph of a yellow sally. This did the trick and as my top fly drifted tight to a large rock that jutted into a nice deep run, the hopper dipped and I set the hook and played a nice twelve inch brown trout. It was a nice test of my new rod, and I was pleased with the lightness of the rod along with the fish handling capacity. I moved on and landed one additional smaller brown before arriving across from my car at around 12:30PM. 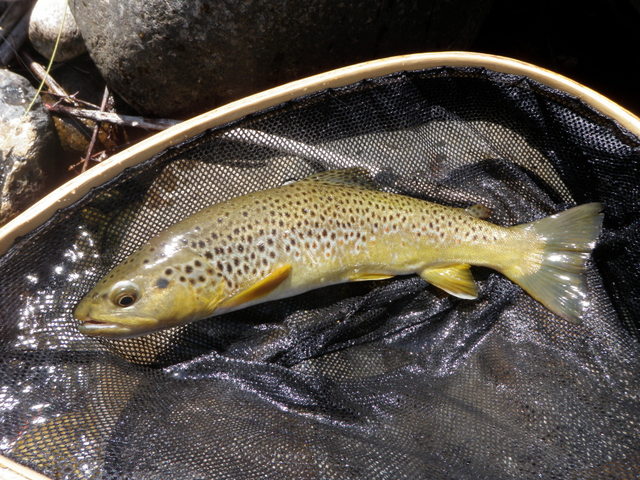 First Fish on Friday Was a Beauty

I ate my lunch by the river and carefully observed but didn’t see much insect activity on the water. I decided to walk up the highway after lunch and cross to the northern most channel of the river. This is one of my favorite stretches of water on the Arkansas. I crossed the two channels closest to the road and circled around the junction of channel three with the main stem and began prospecting the juicy riffles of moderate depth that characterize this area. Initially the hopper dropper was not producing and I covered quite a bit of nice water that is usually very productive. In the next attractive stretch I observed several refusals to the hopper and then landed a pair of foul hooked fish. I saw the fish rise toward the hopper and turn away, but set the hook anyway and foul hooked the browns with the trailing nymph. 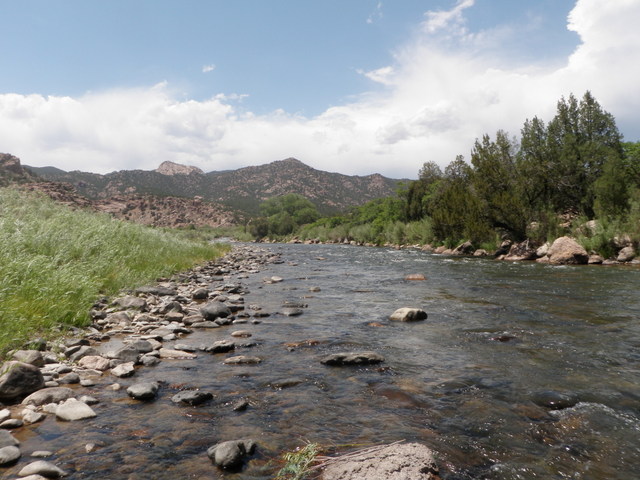 After the second foul hook incident I paused to analyze what was going on. The Royal Gorge Angler web site suggested fishing yellow flies in the size 16 range in the afternoon in the current seams. My fly had the correct color but the wrong size so I theorized I should downsize. I pulled a size 16 lime green  trude from my patch and converted to a single dry fly approach. In short order a decent brown sipped in the lime green trude at the tail of a riffle right above me. Very quickly two more browns slurped the frauds, but then in the next stretch of pockets I observed multiple refusals. Now my mind began to analyze again. Perhaps my fly was a bit too green? I had some size 16 yellow sallies in my patch so I tied one on and drifted over the area where the last refusal had taken place. No luck. I spotted a solitary mayfly take flight off the water that may have been a PMD. Could they be tuned in to a sparse PMD hatch? I tried the money fly, but this elicited nothing.

At least the lime green trude caught a few fish and grabbed their attention, so I reverted, but this time tied on a size 14 or 12 fly. This fly was much easier to follow in the riffles and glare, and much to my amazement, it began to produce fish. I landed a decent brown and over the remainder of the afternoon up until 3PM I added two more to bring my count to eight on the day. I continued to get refusals to the larger trude, but It seemed to be most successful on drifts where I cast across and let the fly drift down to the tail of a riffle or run.

It was a fun day, and I felt quite proud to have landed eight fish in 90 degree heat with minimal cloud cover. I also felt the satisfaction of casting my new lighter four weight rod and feel the throb of some fish. 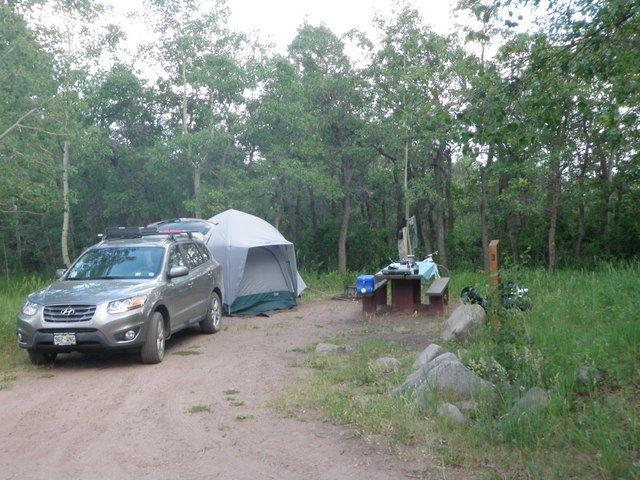 After calling it quits I drove another 20 miles or so to the Lake Creek Campground where I snagged one of the three remaining campsites. I cracked open a beer and ate some snacks and read a fly fishing magazine while waiting for Dan and Jane to arrive with dinner. They arrived as expected around 7:30, and after gobbling a grilled ham sandwich with potato chips, I helped Dan gather firewood. We thought there was a fire ban, but several fires were already crackling at other campsites, so we joined the fun.