Baby sitting and social commitments prevented me from revisiting a stream for five days after my wonderful outing on the South Fork of the Rio Grande on 06/21/2022. The flows on the major freestones were dropping rapidly, and I was concerned that I would miss out on my much revered edge fishing in 2022. Monday, June 27, represented a one day window to take advantage of the falling but clear conditions, and I elected to make the three hour drive to the Arkansas River. I previously committed to a trip to Eagle, CO to fish with my friend on Tuesday and Wednesday, so the drive to Salida represented back to back long journeys, but I was ready for a fly fishing blitz now that the conditions were settling into prime time. 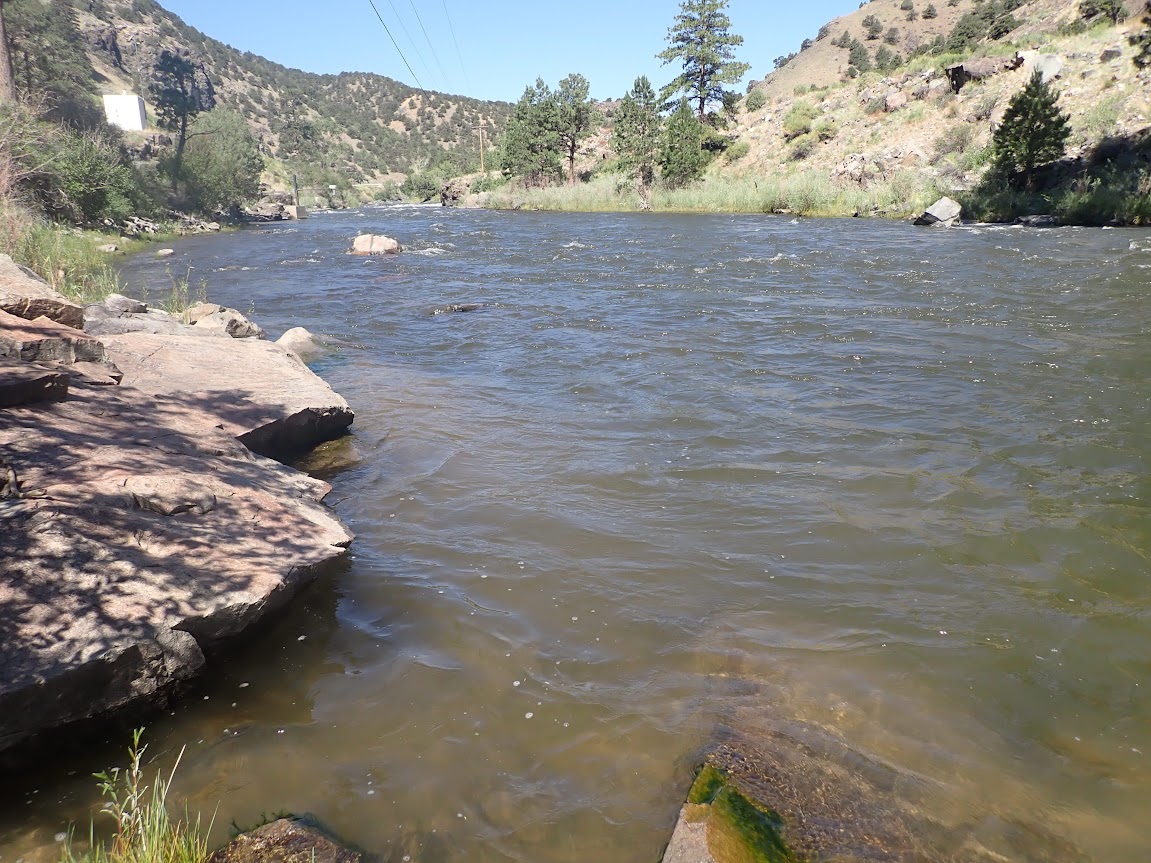 The flows on the Arkansas River on Monday, June 27, were in the low 1100’s; however, the river was quite murky, perhaps due to recent rain. but I persisted, when I noted three feet of visibility along the edges. The air temperature ranged from the low sixties to the mid-seventies, and the sky was mostly clear and sunny, although there were periods of gusting wind to contend with. I planned to park at the county line along US 50, but a truck preceded me, so I jumped out of the car to scan the river, and I spotted another fisherman upriver from where I hoped to begin. After noting this circumstance I drove .3 mile back toward Salida and parked at the next wide gravel pullout. 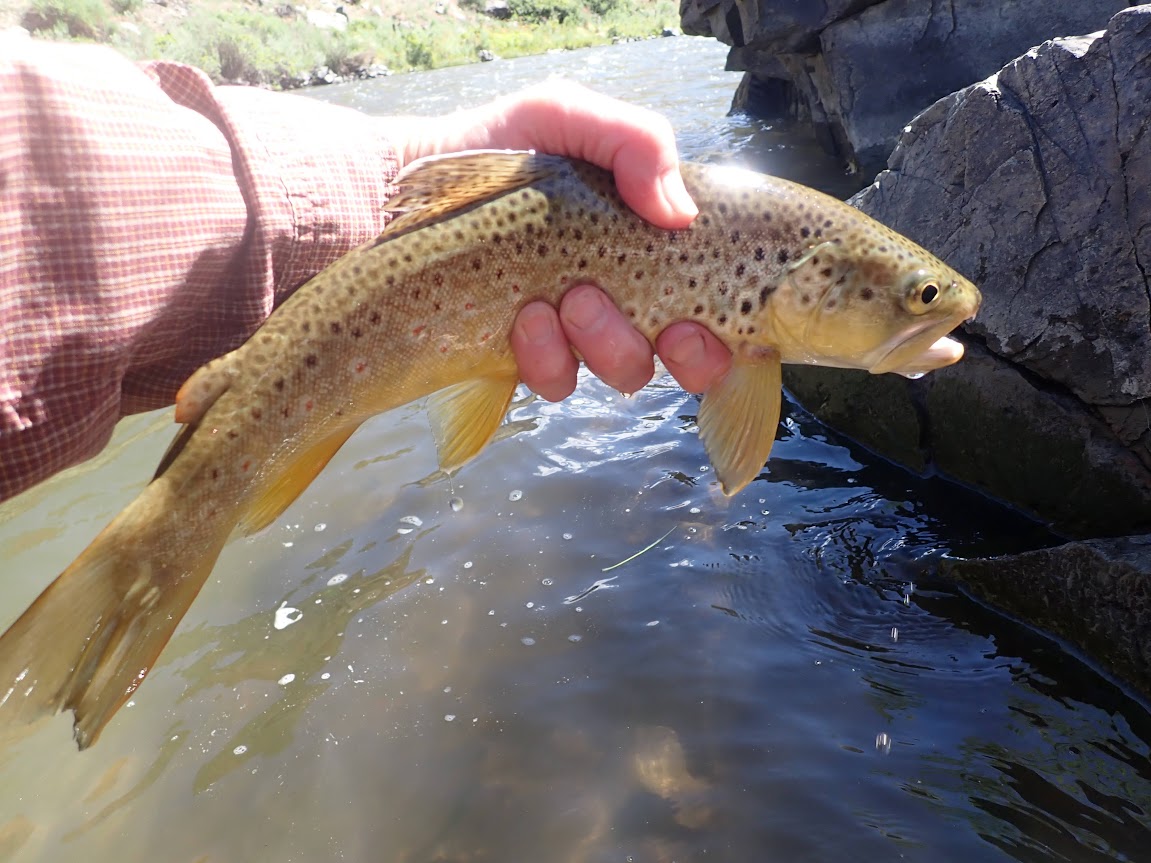 Surprised with This Early Beauty

I strung my Sage One five weight, and once I was geared up, I walked downriver along the shoulder of the highway. When I arrived above the  place, where I originally intended to begin, I realized the truck and angler departed, so I dropped down the bank in compliance with my original plan. I began fly fishing with a size 8 amber ice dub body chubby Chernobyl, olive and black Pat’s rubber leg, and a bright green go2 sparkle caddis pupa. These flies clicked, and I began landing robust brown trout almost immediately. I should say the Pat’s rubber leg clicked, because nearly all the early brown trout grabbed the weighted chenille stonefly imitation. 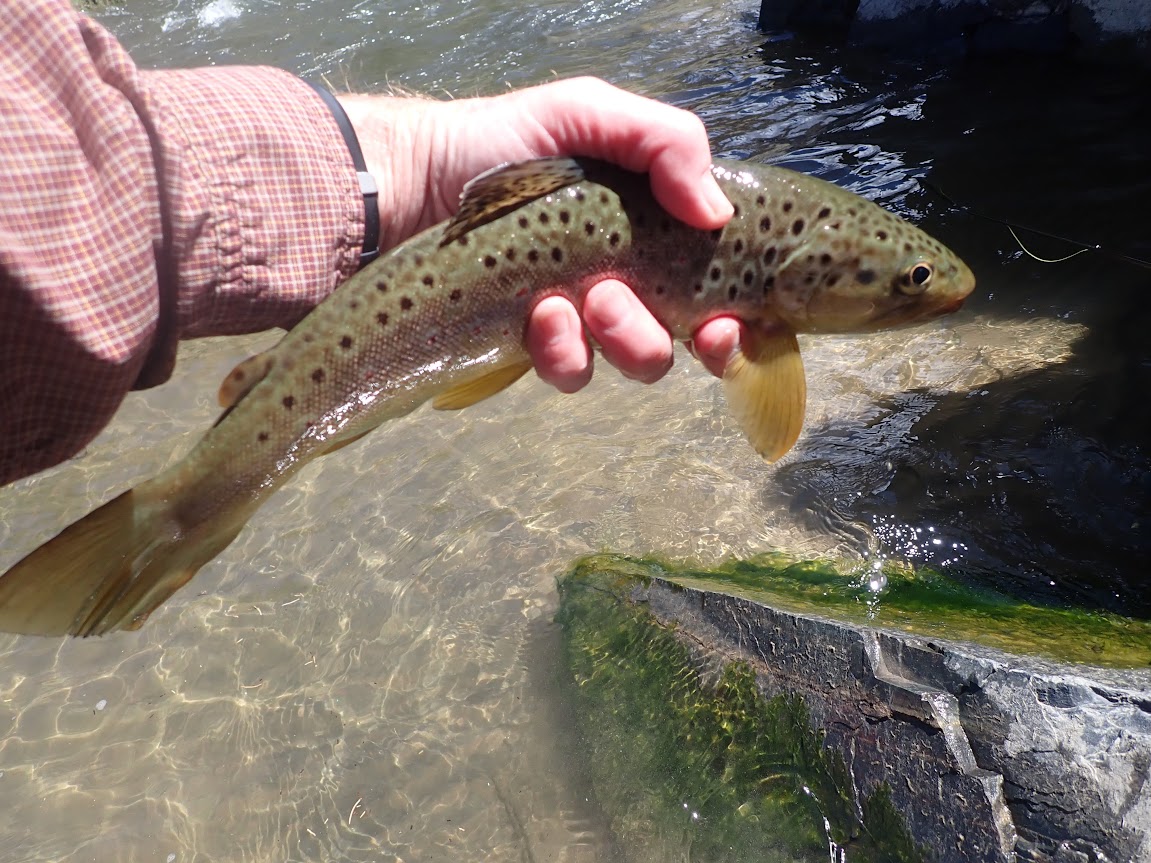 I slowly worked my way upstream and fished almost entirely in the ten foot corridor along the left bank. Deep rocky pockets, seams along faster deep slots, and moderate riffles were the main productive river structures that delivered positive results. By lunch at noon the fish count rested on thirteen, and the majority of the landed fish were brown trout within the twelve to fourteen inch range, and these fish were quite healthy and chunky. 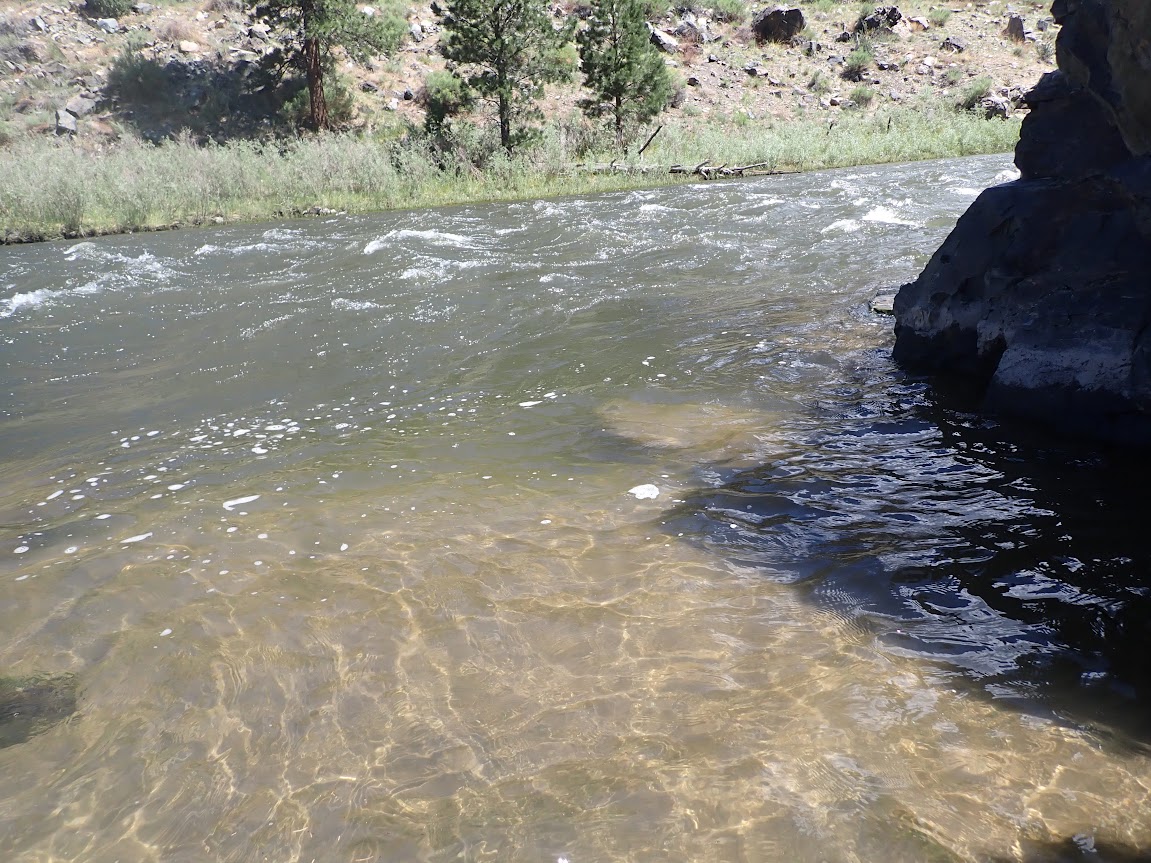 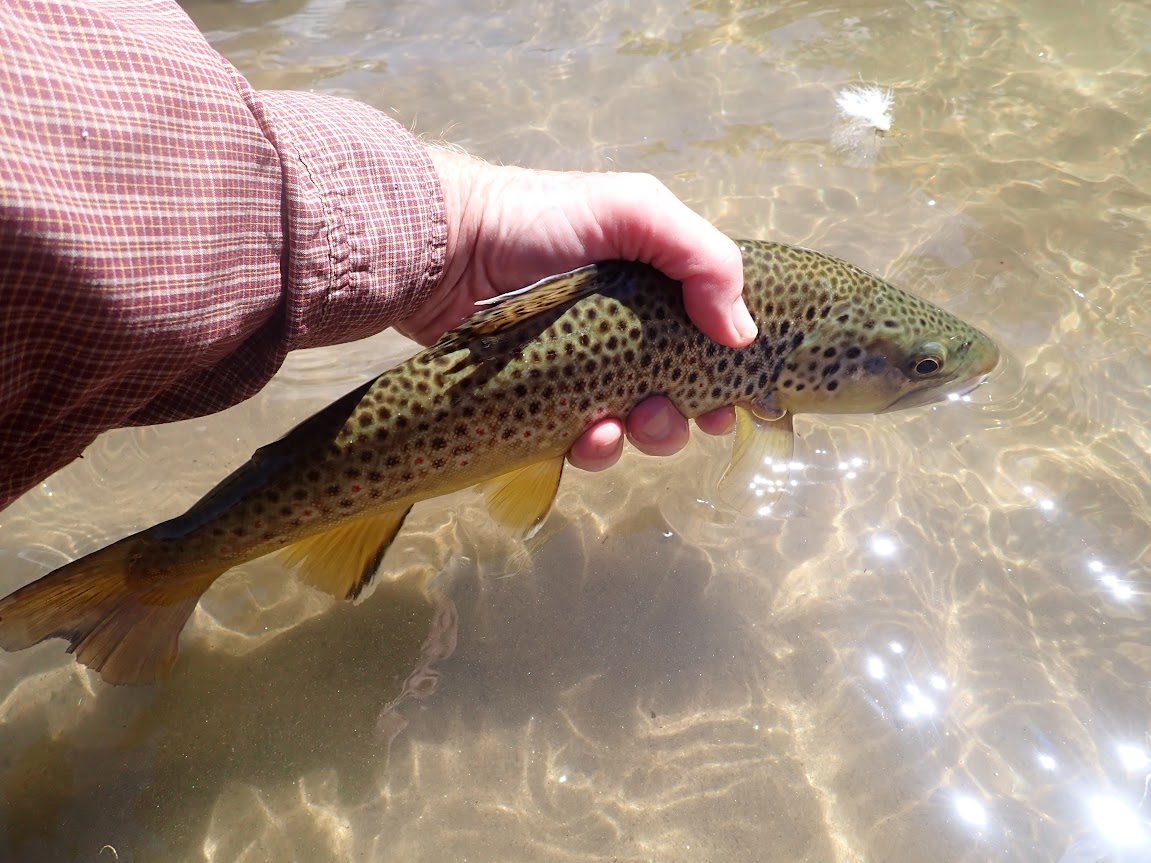 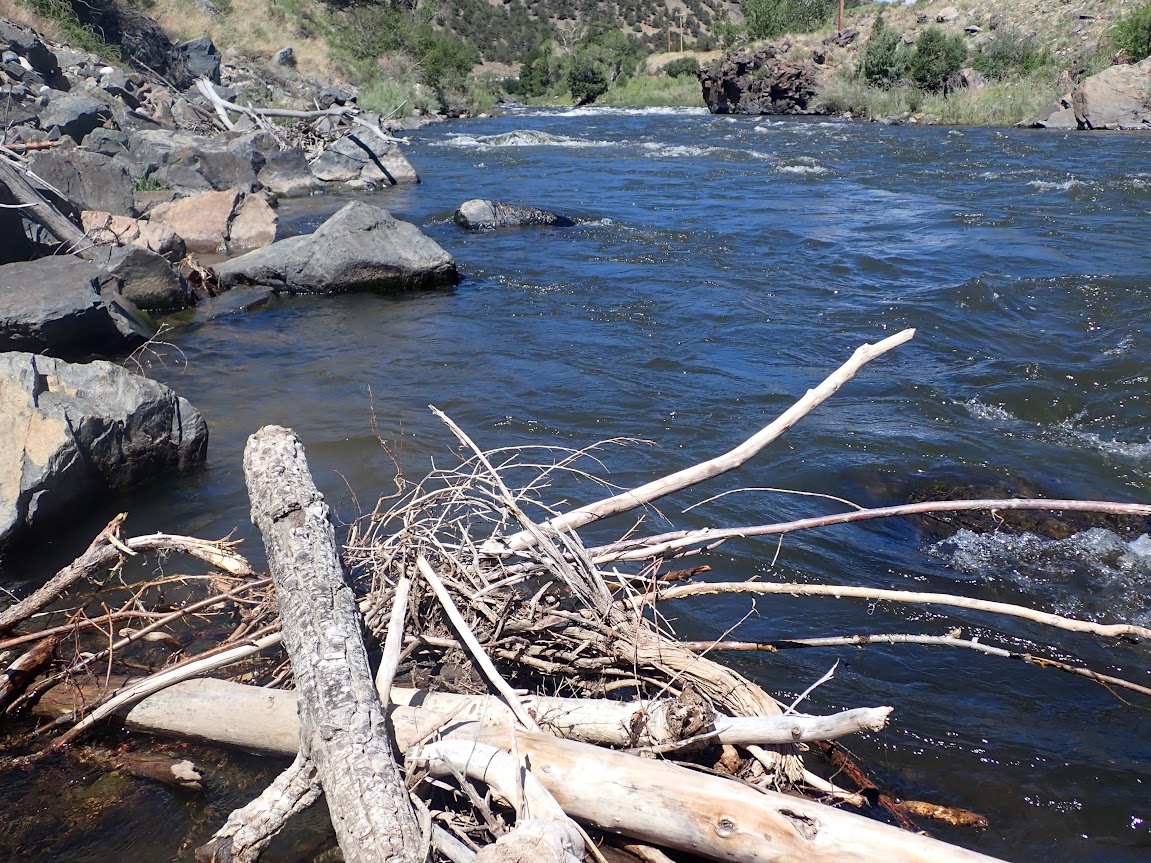 After lunch the same approach continued, until I quit at 3:30 PM. I swapped the go2 caddis pupa for a size 14 prince nymph, and this move paid dividends, as five trout snared the prince. Most of the prince eaters reacted to a lift toward the end of the drift in front of a submerged boulder. At one point I dropped some casts at the head of a gorgeous deep shelf pool, and my first rainbow trout thrashed and fought, until I brought it to my net. During the early afternoon, rainbows became more prevalent, and I added three more chunky fighters in the fourteen to fifteen inch range. The rainbows seemed to hold in deeper water that bordered faster runs. At some point I foul hooked a rainbow, and as it raced to escape, it broke off all three of my flies including the chubby Chernobyl, Pat’s rubber leg, and prince nymph. I replaced the chubby with another version that displayed an orange body rather than the amber ice dub. The top fly was only serving as an indicator, so why risk losing my favorite ice dub models? 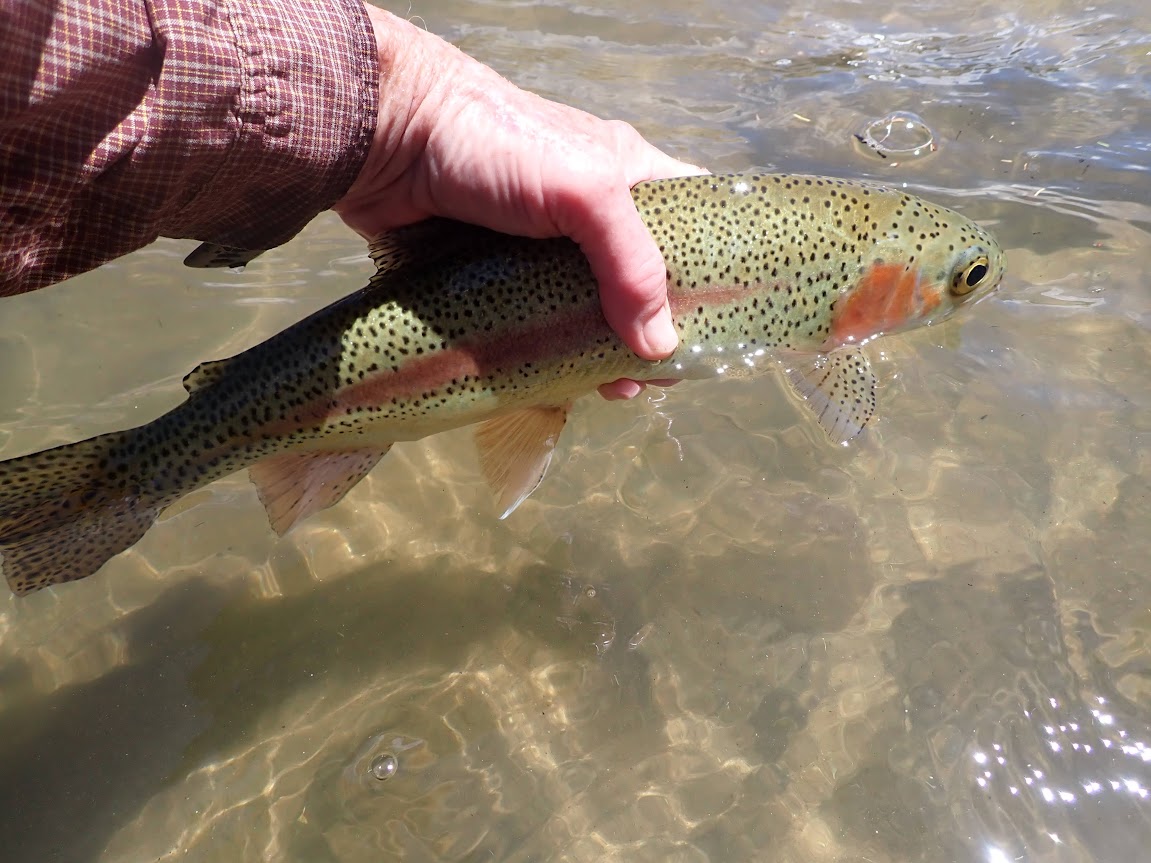 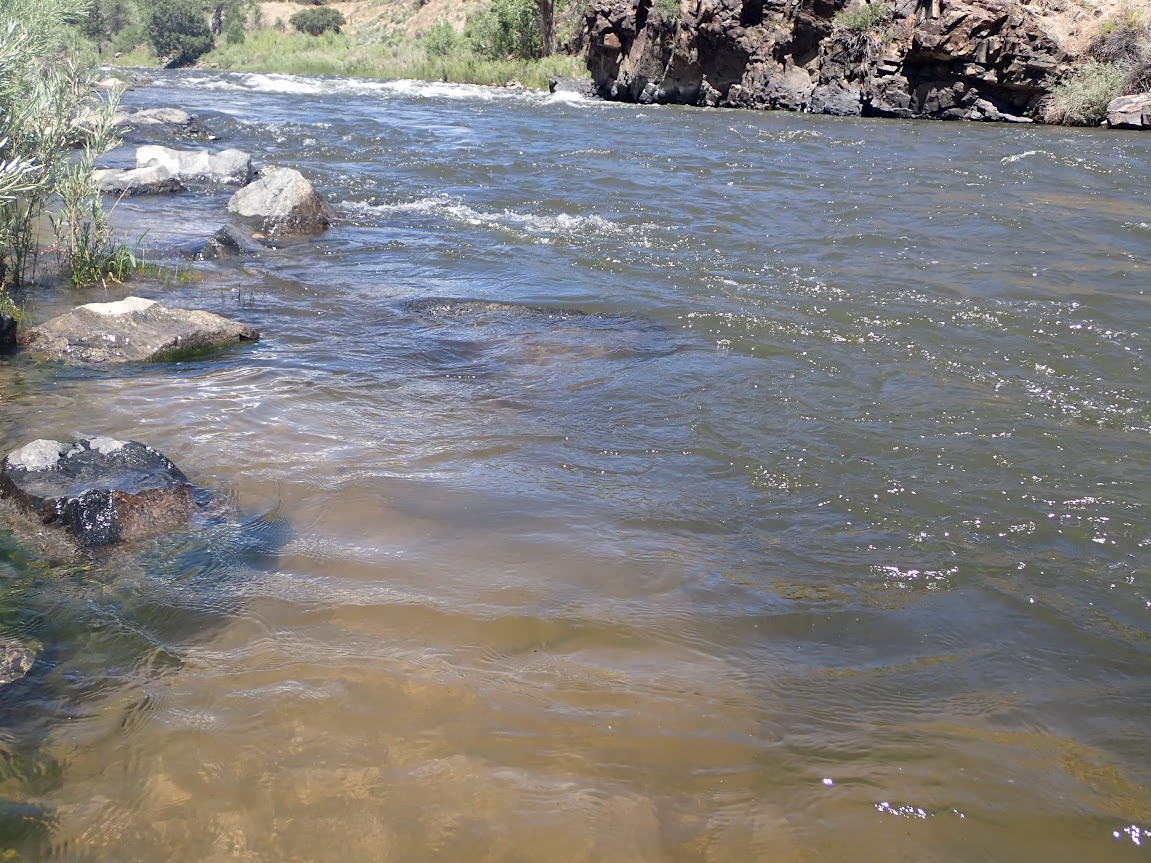 The chenille on the replacement Pat’s rubber leg unraveled after a couple fish, so I gambled and replaced it with a size 14 20 incher, and after spotting a sparse emergence of pale morning duns, I experimented with a salvation nymph in the end position. I also tested an iron sally for some period of time after observing a few golden stoneflies and yellow sallies in the air. The salvation nymph produced four trout, and I built the fish count to twenty-nine, before I called it quits. 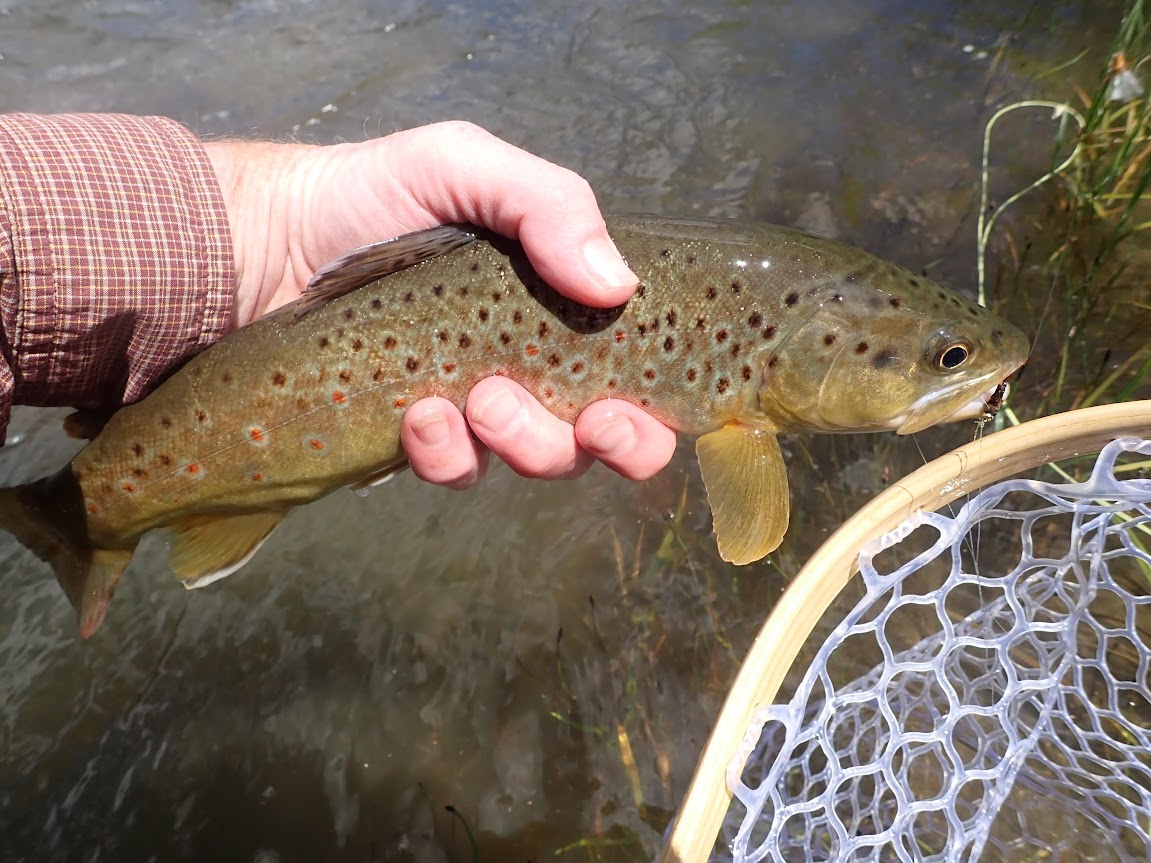 20 Incher in the Mouth 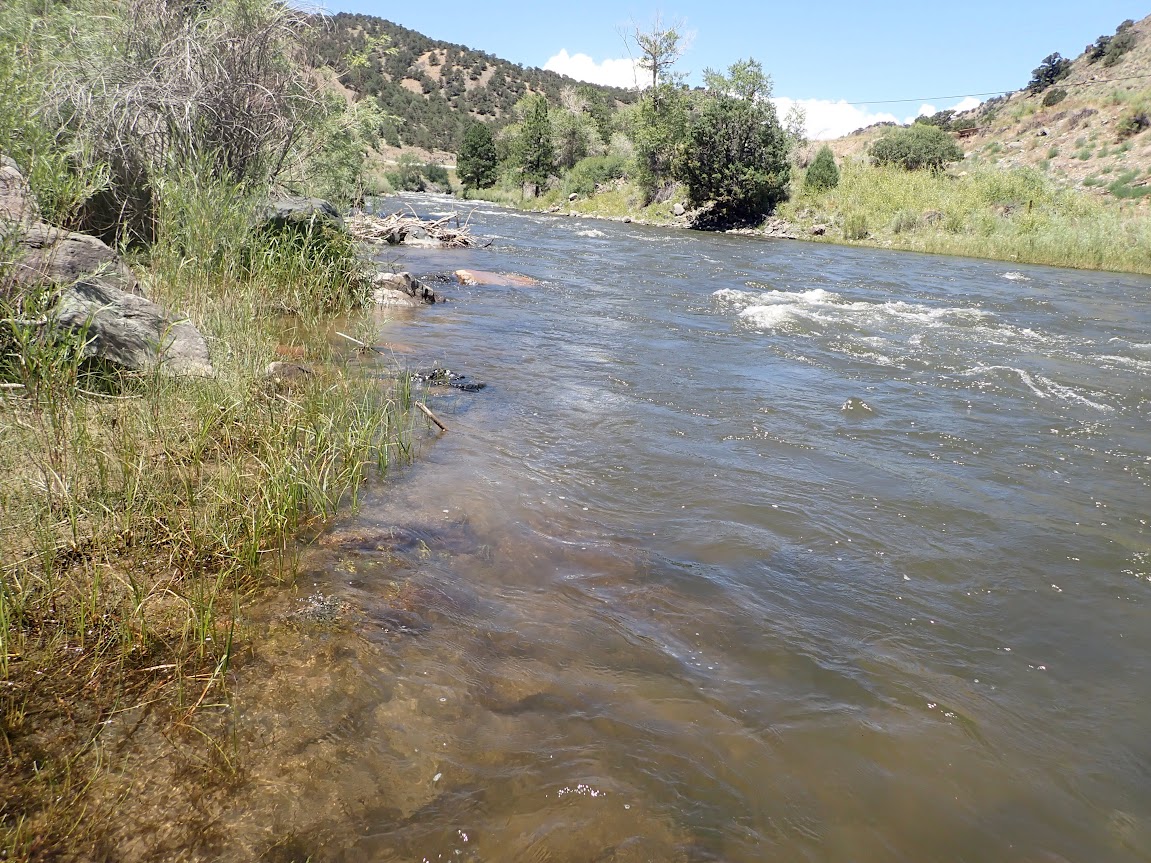 On the day, I landed twenty-nine trout including five rainbows and twenty-four browns. Approximately five landed trout ate the prince nymph, four consumed the salvation nymph, and the remainder mashed the Pat’s rubber legs. Monday was easily the best day I ever enjoyed with the Pat’s rubber legs. Once it gets wet it looks like a green glob with bouncy appendages, but apparently the trout judge it to be an easy meal. Monday evolved into exactly the kind of day I expected, and that is a rarity. I confined my casting to the edges, and I stayed with a dry/dropper during my entire tenure on the river. The trout loved my rubber leg nymphs as well as the prince and salvation. I moved at a steady pace and executed three to five casts in all the likely spots, and quite often I was rewarded. I would guess that twenty of the landed trout were hardy battlers in the twelve to fifteen inch range. I love the feeling of confidence that grows from having the right flies and fishing productive spots. Edge fishing has begun in 2022.