Following my spectacular outing on the Arkansas River on April 24, I began following the fishing reports of the fly shops in Salida (www.ArkAnglers.com) and Canon City (www.royalgorgeanglers.com). Both web sites indicated that the cool weather over the weekend stalled the progression of the caddis hatch around Cotopaxi, but the warmer weather this week was expected to prod the hatch to move up the river toward Salida. I decided to make another attempt to hit the leading edge of the hatch on Wednesday. Temperatures were projected to peak at the mid-70’s on Wednesday so I once again got off to an early start around 6:30AM.

I arrived at the river by 9:30 and parked at the Fremont – County line pullout as I had done the previous Tuesday. The river was in prime condition with great clarity and the flows appeared to be comparable to the previous week. What would a trip to the Arkansas River be without a bit of hardship however? Before I climbed into my waders I walked down the crude concrete steps and my shoes rolled on some round gravel. As I fell backward I used my left hand to brace my fall and felt a sharp stinging sensation. I looked at my hand and realized the rough concrete sliced off a couple layers of skin in a 1/2″ square area just beneath the little finger on my left hand. I returned to the car and cleaned the fresh wound with some antibacterial wipes and found two small Band-Aids in the first aid kit in the center console. Fortunately it was my left hand, and I wasn’t going to let this ruin my day of fishing.

I prepared to fish and waded across the river at the tail of the long pool, but instead hiking down the railroad tracks to the island as I usually do, I hiked up the tracks 100 yards or so to the next nice water above the long pool. I set up my Scott six weight rod with a Thingamabobber, split shot, beadhead bright green caddis, and beadhead RS2. It didn’t take long before I landed two nine inch browns on the RS2. I moved up along the north bank and probed the nice pockets and soft shelfs of moderate depth with my pair of flies. Just when I thought I was going to land all smaller fish, I hooked and landed a beefy 15″ brown and photographed it. Between 10AM and 11:30 when I paused for lunch I landed nine decent fish with all but one or two attacking the RS2. The Arkansas fish in this stretch below Salida were still in tune with the BWO nymph imitations. 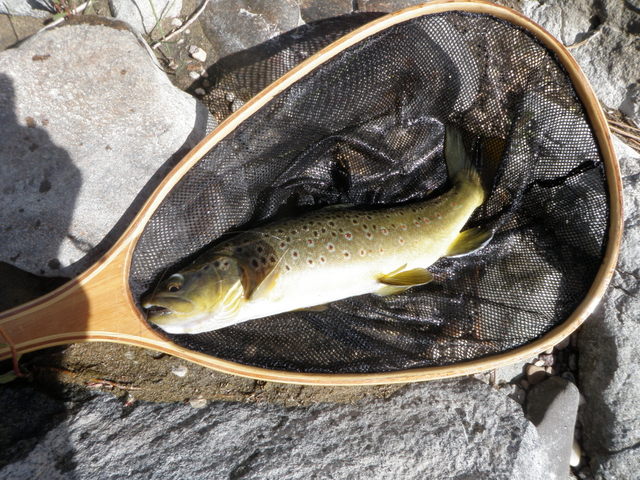 The fishing slowed a bit and I encountered a pair of fisherman above me, so I elected to return to the car and eat my lunch. I sat on my usual perch above the long pool, but didn’t observe any fish this time. After finishing my lunch I decided to drive up the highway toward Salida a bit and parked .5 miles west just beyond a large rock. There was a SUV parked on the east  side of the rock and several fishermen were in the lower pocket water that I was thinking of fishing. I remained flexible and began fishing 30 yards or so above the most upstream of the group of fishermen in a nice run where I’d spotted fish on previous trips. On the third drift at the head of the nice run the indicator dipped and I hooked, played and eventually landed a beautiful 15 inch rainbow. The hard fighter made several strong runs to the edge of the current before I could steer it back to my net. 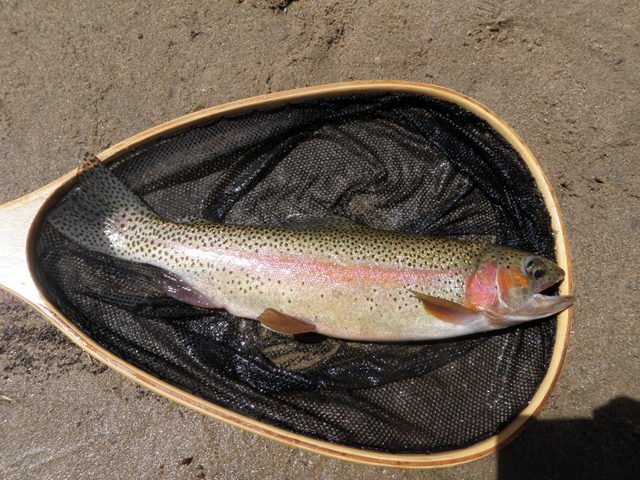 Orange and Pink Cheek on This Rainbow Landed After Lunch

Right along the edge of some large rocks just above the rainbow run, I spotted a fish making a quick rise and sure enough on the second drift tight to the rocks a nice brown took the bright green caddis on the lift. I was getting pretty optimistic about the prospects of the afternoon. A bit further upstream I landed a smaller brown to put my count on the day at 12. But the fishing would slow considerably at this point. The sky was clear blue and now the air had warmed to the seventies. I continued working the nymphs until I reached a short pocket where I observed a decent rainbow reveal itself with a slow sipping rise. I tried sweeping my flies and jigging them past the rainbow but received no response. Finally I relented and removed my nymph fishing setup, and tied on a CDC BWO to entice the rainbow. Unfortunately this got ignored as well and after a few casts I could no longer spot the fish.

What should I do now? I didn’t want to tie on the nymphs and crimp on split shot and add an indicator again after having just removed everything, but I had no confidence in prospecting the big water of the Arkansas with a tiny BWO imitation. I decided to tie on a size 12 stimulator/caddis with a light olive body and then add the RS2 dropper a foot beneath the indicator fly. I worked this combination along the bank in some attractive water for twenty minutes or so and foul hooked one fish that apparently refused the caddis but got nailed by the trailing RS2.

I finally decided that the two fly nymph combination was the most effective approach and returned to it. I picked up a couple fish, one on the bright green caddis and one on the RS2 and then skipped around some big deep holes and came upon a stretch of pocket water. The river at this point was wide, so I could wade out a bit and hit some short pockets in the middle of the river. Some clouds rolled in and the breeze kicked up a bit and suddenly the fish were attacking the RS2 again. I moved quickly from small pocket to small pocket and tucked upstream casts behind the large boulders at the head of each pocket and began hooking fish as I lifted my flies at the tail. I landed five browns of moderate size using this technique with one taking the caddis pupa and the others falling for the RS2. I continued to be amazed at how effective the tiny RS2 continued to be throughout the entire day. I experienced quite a few momentary hook ups in this stretch in addition to the five fish I successfully landed. 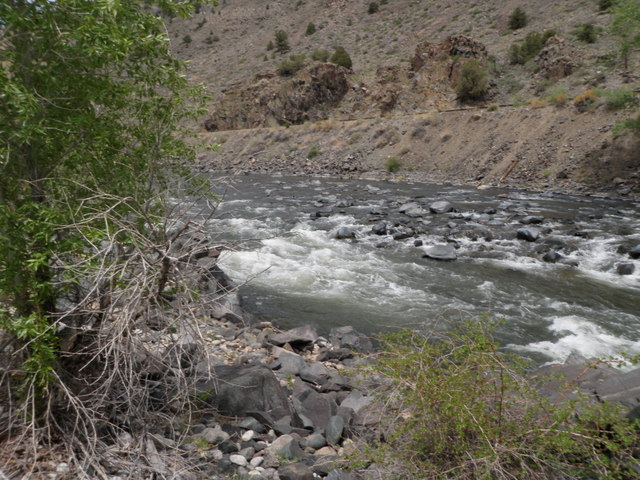 I Love This Type of Water

When I reached the point where a tiny feeder stream entered the river, I was above the pocket stretch, and wasn’t experiencing any action so I changed the bright green pupa for a duke nymph as my top fly. For the last hour I fished the duke/RS2 combination and had three hook ups that felt like nice fish, but I failed to land them. The RS2 is a very effective fly, but because of the diminutive size 22 hook, it is difficult to keep fish attached long enough to land.

I worked hard to land a twentieth fish, but after losing three and with the sun back in the clear blue sky, I decided to call it a day and hiked back down the highway to the car and prepared for the 2 hour and 45 minute return trip.