My friend Steve Supple and I made another trek to the Arkansas River on Wednesday, April 18. From a weather perspective it was about as good as it gets in mid-April as the high temperatures reached the 70’s, and it was mostly sunny with some periods of cloudiness in the afternoon. We set out in hopes of finding the leading edge of the elusive Arkansas River caddis hatch. Did we find it?

I met Steve at his house in Lone Tree at 7:15AM, and Steve offered to drive his new Subaru Outback so I eagerly acquiesced. We stopped at the Royal Gorge Anglers on our way to the river, and Steve purchased a few flies so we could get some advice. Bill Edrington, the former proprietor, told us that cooler temperatures had caused the hatch to stall in Canon City, but with the nice weather forecast for Wednesday, he predicted the caddis should be moving into the canyon between Parkdale and Texas Creek.

With that information stored in our brains, Steve and I eagerly departed and decided to try the water around Salt Lick as our starting point. I never fished this area which is situated between Five Points where I ended on my last trip and Pinnacle Rock, another favorite destination of mine. Steve purchased an annual Colorado State Parks pass, and these cover parking at the Arkansas Recreation Headwaters parking areas, so we took advantage and parked at Salt Lick. Both Steve and I were in our waders and rigged up and ready to test the waters by 10:15.

Steve began at the tail of an attractive pool and run just upstream of the steps from the parking lot. I moved to the top of the run and tied on a Go2 caddis as my top fly and a bright green caddis pupa as the bottom offering. Within the first fifteen minutes the indicator paused and I set the hook and landed a chunky 12 inch brown that went for the Go2 caddis. I was quite pleased with this early success and anticipated a day of fast action. Unfortunately as I moved up the river and covered some very attractive runs and pools, I struggled to see any more action. I exchanged the Go2 caddis for an ultra zug free-living caddis, and that didn’t help. 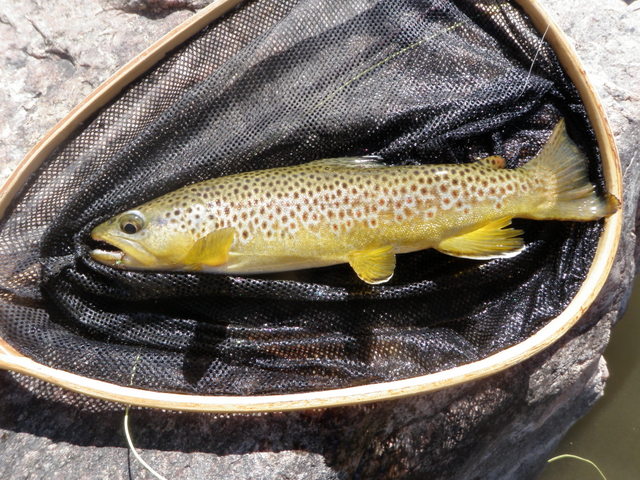 First Fish of the Day

I encountered a high rock wall that blocked my path along the left bank, so I crossed the left channel to a small gravel island and fished the smaller north braid. I changed flies several more times and experimented with the emerald caddis pupa and a beadhead RS2. Edrington suggested a caddis larva and RS2 for the morning, so I reverted to the local advice for awhile but to no avail. Finally I returned to Steve, and he informed me that he landed two early, but wasn’t having much luck either.

I paused and remembered that in previous years at this time of the month I had success with prince nymphs. There were quite a few caddis flitting about in the willows and boulders, so perhaps the fish would be attuned to diving adult caddis which is what I believe the prince nymph imitates. I didn’t have anything to lose, so I tied on a prince nymph as my top fly and added an RS2 to the bottom. I walked back up along the river and climbed around the large vertical rock wall to the next nice spot above. In short order I landed a second fish on the RS2, but then in a nice deep run I hooked and landed a nice brown on the prince nymph. A fourth fish, a rainbow, came to the net within minutes, and this fish favored the prince as well. Finally in a nice deep slot 20 feet out from the bank, my indicator plunged and I set the hook and was attached to a heavier fish. I played it briefly, but it made a dive and a roll and broke off both my flies. Since it broke at the top fly I assumed this was another prince nymph incident.

Since it was now noon, and I needed to tie on a new set of flies, I decided to climb the steep bank and hike down the highway and relate my prince nymph successes to Steve and see if he was ready for lunch. Steve agreed that he was hungry, so we munched our lunches streamside and decided to move the car .2 miles upstream as I intended to continue working my way upstream after lunch. 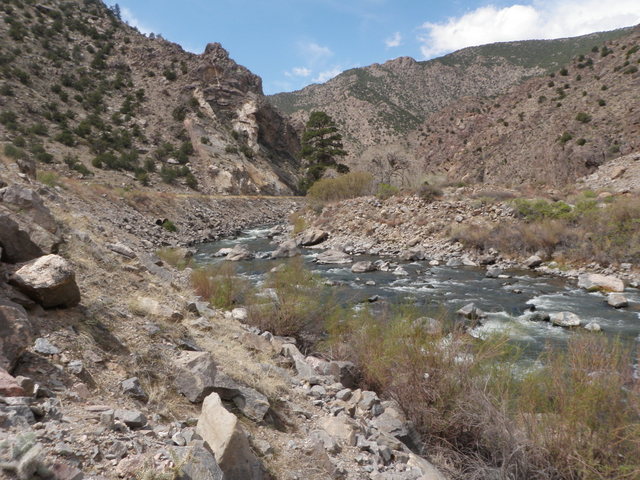 After moving the car, Steve migrated back to the nice water by the vertical rock walls and I resumed fishing the pockets and slots along the left bank. I attached a new prince as my top fly and decided to return to the bright green caddis pupa for my second fly. There were enough caddis in the air that I felt there had to be pupating and emerging insects, so I was covering both emergence and egg laying with my two flies. These two flies turned out to be a great choice as I landed thirteen additional trout up until 2:30, or over a roughly two hour period. Most of the fish were taken from quite small nondescript lies right along the edge. I was employing the jigging technique that worked the previous Friday, and many of the fish grabbed a fly as I lifted the rod tip. It was great fun and the hardest part was scrambling over the prolific large boulders and rocks that exemplify the Arkansas River valley. In addition roughly 75% of the fish snatched the bright green caddis on the lift, but the prince continued to produce the remaining fish. 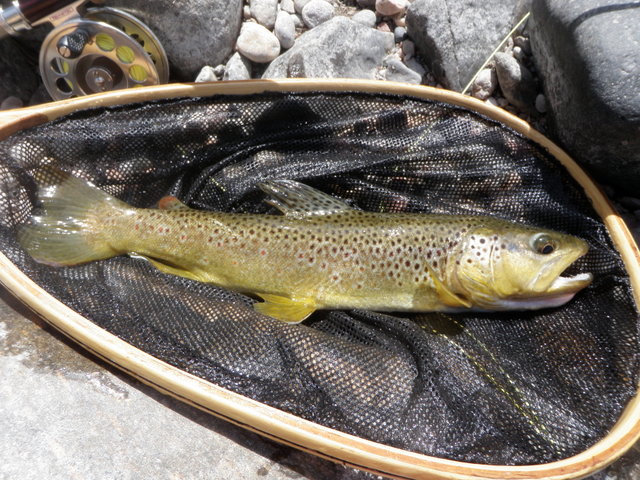 At approximately 2:30PM I approached a long deep smooth pool. I was having so much luck with the pair of wet flies in the small pockets and faster water, that I decided to skip over the long pool. But as I was negotiating my way over the rocky bank I spotted a couple rises behind a rock in the pool. The sky clouded up a bit and the breeze picked up and another fish rose, and then another, and well you can envision the picture. I was having fun subsurface, and it is a significant pain to tie on the nymphs and pinch on split shot and add a strike indicator, so I didn’t want to abandon my successful approach prematurely. But there were now enough fish showing that I couldn’t resist going to the top. Besides this might be the beginning of a massive hatch, although it seemed the fish were focused on skittering ovipositing adults.

I clipped off everything and tied on a nice size 16 dark olive deer hair caddis. On the first cast above a large subsurface rock a feisty brown rose and inhaled my caddis. It wouldn’t turn out to be this easy; however, as I targeted some other sporadic risers and experienced some refusals. But then I spotted a fish rise towards the middle of the river and I floated a downstream cast over it, and another smashing take took place. After I’d landed a few on dries, Steve appeared high above at the top of the bank and asked how I was doing. I told him about the risers, so he decided to return to the sweet water he’d been on in the AM and check out the flats for rising fish. I continued up the pool and landed perhaps five in total from the pool area.

When I reached the faster run at the head of the pool, I was trying to decide whether to return to subsurface fishing or stick with the dry fly. I was guessing the subsurface fishing would be as good or better than my early afternoon experience, but I didn’t relish the changeover, and it was fun doing something different. Why not try prospecting with the caddis in the same spots tight to the bank? I decided to give this method a try, and sure enough it worked. I added another four browns to my total by popping casts into the small pockets and slack water between the river current and the bank. I felt like I was covering more water to get the fish, but I was having fun nevertheless.

By 3:30 I wasn’t seeing any more rises and fewer caddis were on the water and I was having difficulty punching my casts into the wind, so I decided to return to the prince nymph and bright green caddis. Using these flies I landed a couple more fish, but broke them off at some point as it was approaching 4PM. I wasn’t sure how long Steve planned to fish, so I used this as an opportunity to make the long hike back to the car. I found Steve back at his starting point from the morning, and he told me things had slowed down quite a bit. As we watched, however, we saw a few sporadic rises, so I decided to tie the caddis back on my line and made a downstream cast so the fly drifted over the spot where the trout had risen several minutes ago. I noticed a subsurface flash, and in a split second set the hook as the fish bulged on my fly. 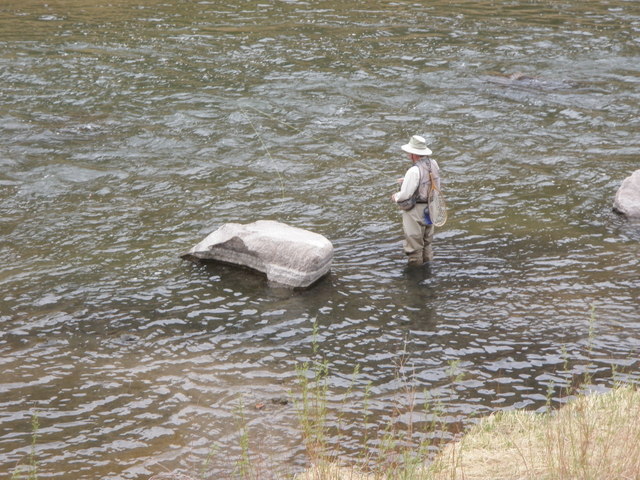 That pretty much ended the rises, at least rises that weren’t in unreacheable positions near the far bank. Steve and I decided to drive back down route 50 to Parkdale and inspect the flats in that location for rising fish. We stashed our gear in his car and made the five to eight mile trip east to Parkdale and checked out the water. We didn’t see anything to attact us to the water, so elected to remove our waders and make the long drive back to Denver.

Once again the main caddis hatch eluded us, but we had a great day nonetheless working prince nymphs, caddis pupa and experienced a tease of a midafternoon hatch. It is these teases that draw me back in search of the massive caddis hatch.