I enjoyed a decent early season outing on the Arkansas River on March 9, 2021, and I was quite anxious to make another trip. Unfortunately a massive snowstorm and a series of family and health commitments prevented a return until yesterday, April 2, 2021. Fortunately the stars aligned on Monday, and gorgeous spring weather combined with nearly ideal flows in the 250 CFS range to lure this avid fly fisherman to the area below Salida, CO. I arrived by 10:30AM and quickly assembled my Sage One five weight and reluctantly pulled on a light fleece. The temperature, when I began, was 53 degrees, but forecasts suggested a high in the upper sixties. By the time I assembled my gear and hiked along US 50 for .5 mile and descended to the river, my watch registered 11:00AM. 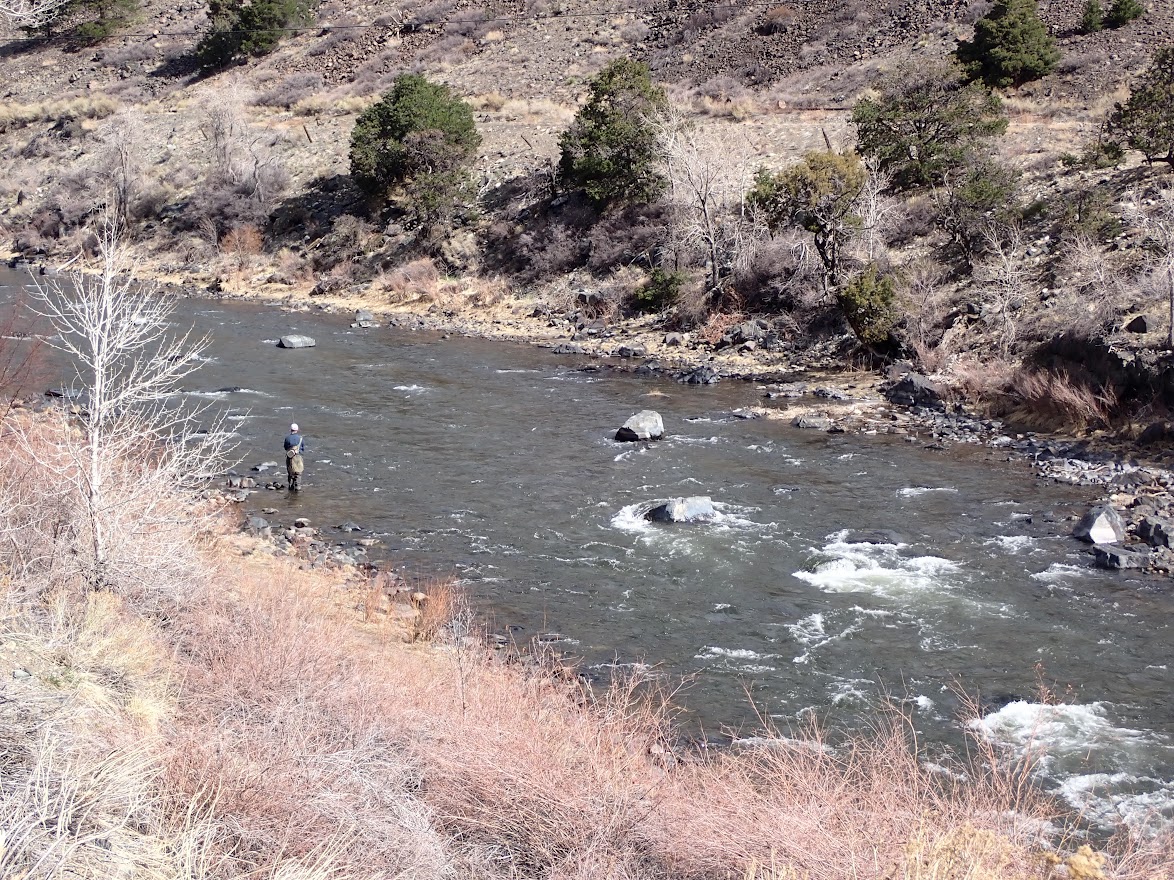 One of Two Fishermen Spotted During My Time on the River

I began my quest for hungry trout at the Fremont – Chaffee County line, and rigged my rod with a New Zealand strike indicator, split shot, 20 incher and classic RS2. During the morning session I hooked and landed two nice brown trout in the twelve to thirteen inch range on the trailing RS2’s; the first on a classic RS2 and the second on a sparkle wing version. I also snagged bottom early in the game, and when I finally leveraged my flies free, they catapulted into a tall juniper tree directly behind me. The branch was alive and too high to reach, so I was forced to apply direct pressure and snapped off the two flies. I replaced them with a yellow-brown Pat’s rubber legs and sparkle wing RS2, and eventually the Pat’s rubber legs yielded to an iron sally. 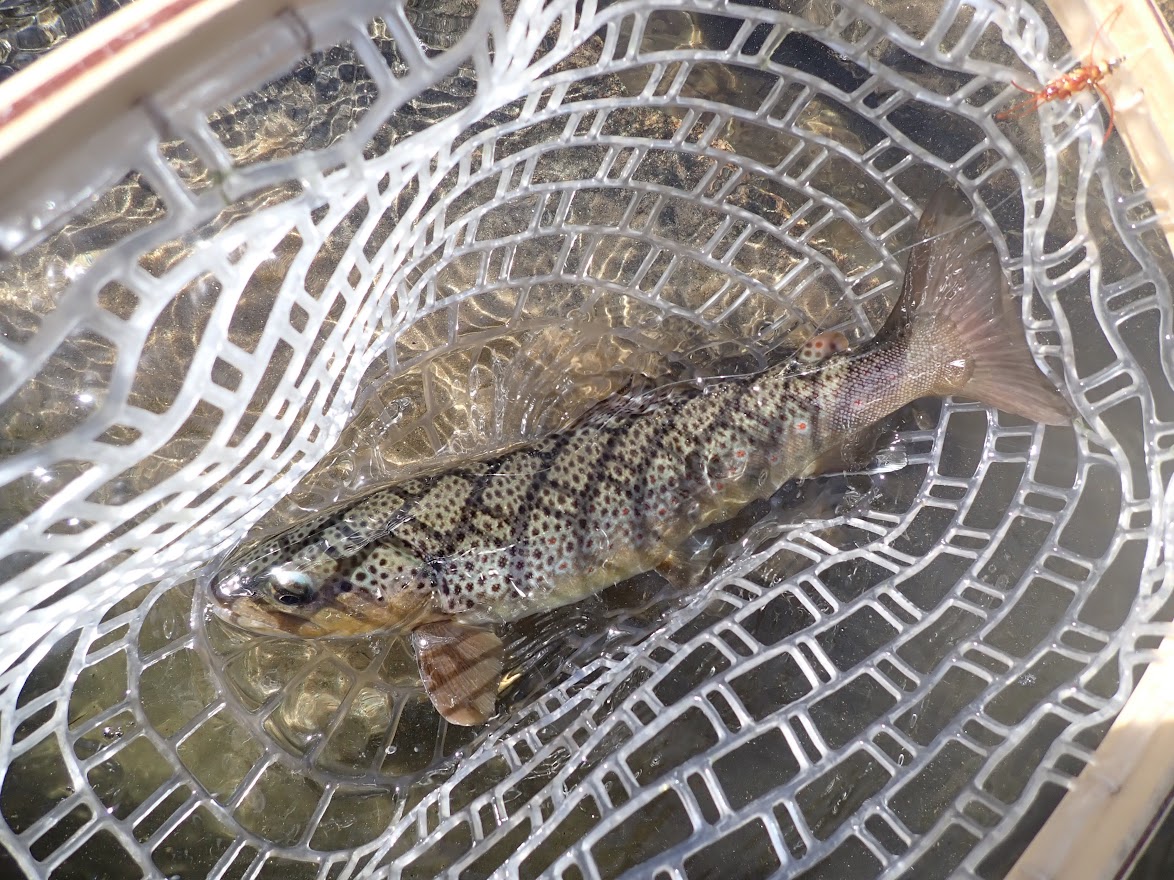 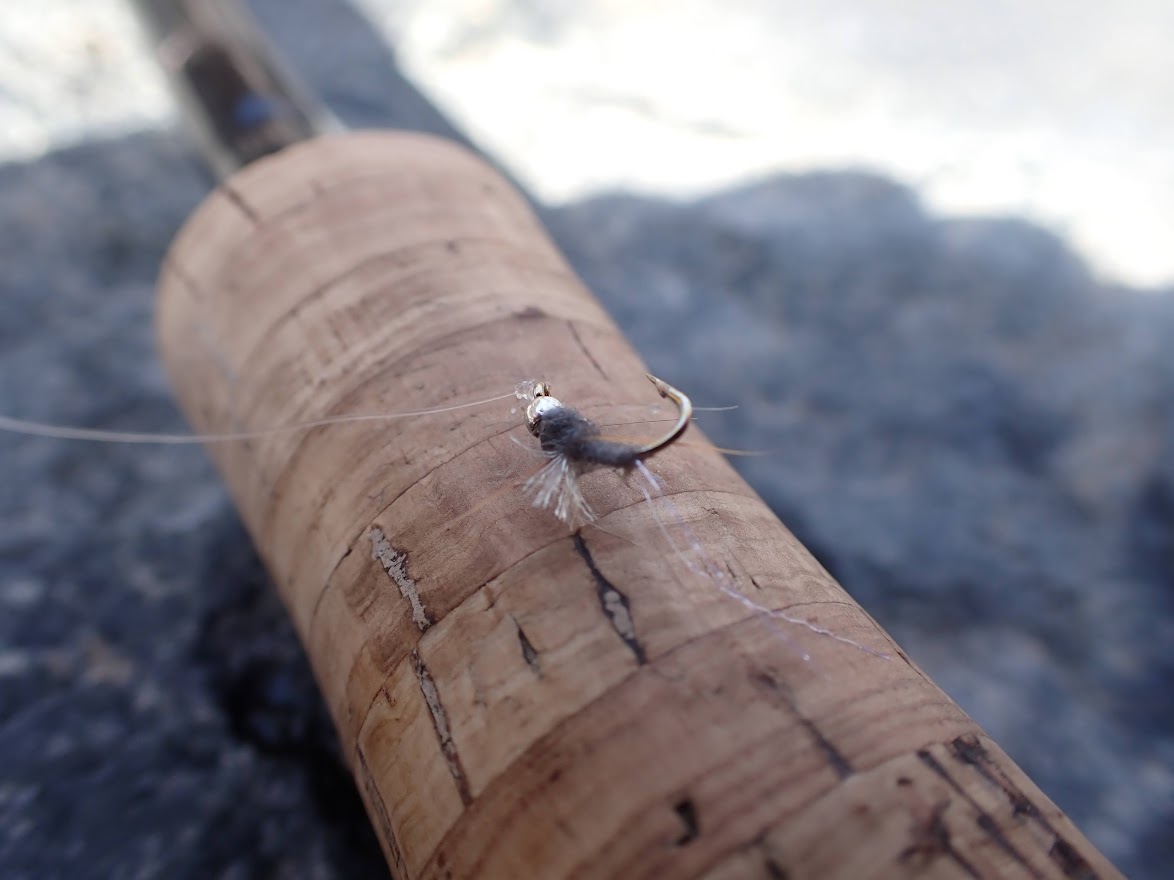 Sparkle Wing RS2 Was a Favorite

I broke for lunch with the fly count resting on two, and after consuming my standard snack, I climbed the bank to obtain a strong satellite signal and used my new Garmin Inreach Mini to send a preset text to Jane. This was more of a test than a requirement, but it worked great, and I am now prepared with my satellite phone for hikes to more remote fishing locations. 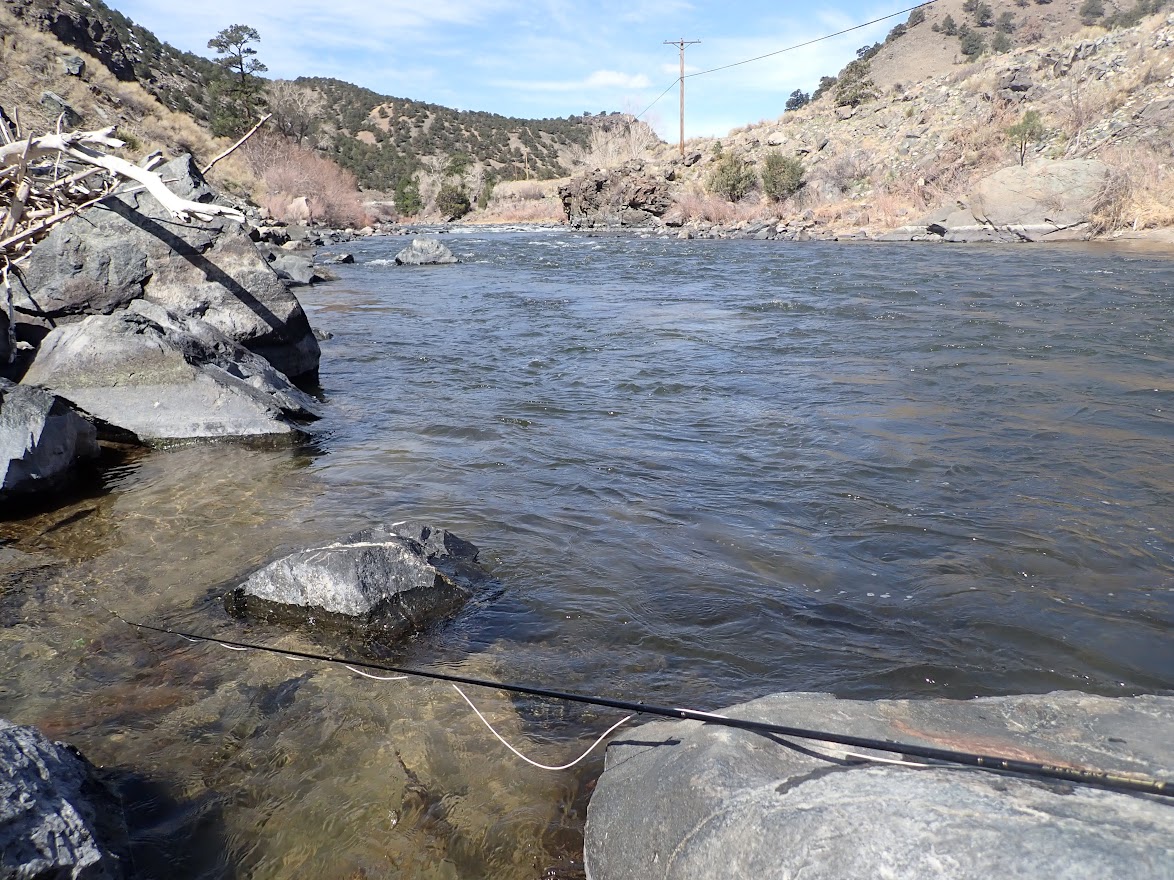 Slack Water Along the Edge Was Productive

After lunch I continued to advance along the left bank, as I prospected the double nymph rig in likely trout holding locations. I was able to spot some very nice fish along the way, but in spite of some very focused drifts to sighted trout, I was unable to provoke a take. I debated swapping the nymph rig for a dry fly approach, but the hassle of removing the split shot and indicator dissuaded me from the necessary time commitment, and there was no guarantee that a dry fly would induce a rise; although I did see several sporadic rises during one relatively short period of time. Instead I tried to focus on riffles and runs of moderate depth, where the deep nymphing setup likely represented the appropriate method. I also tried some lifts in front of the visible trout, but this technique was ineffective. I did observe a few blue winged olive mayflies during the hour after lunch along with swarms of tiny midges. It was unclear whether the trout were attuned to the midges or mayflies. 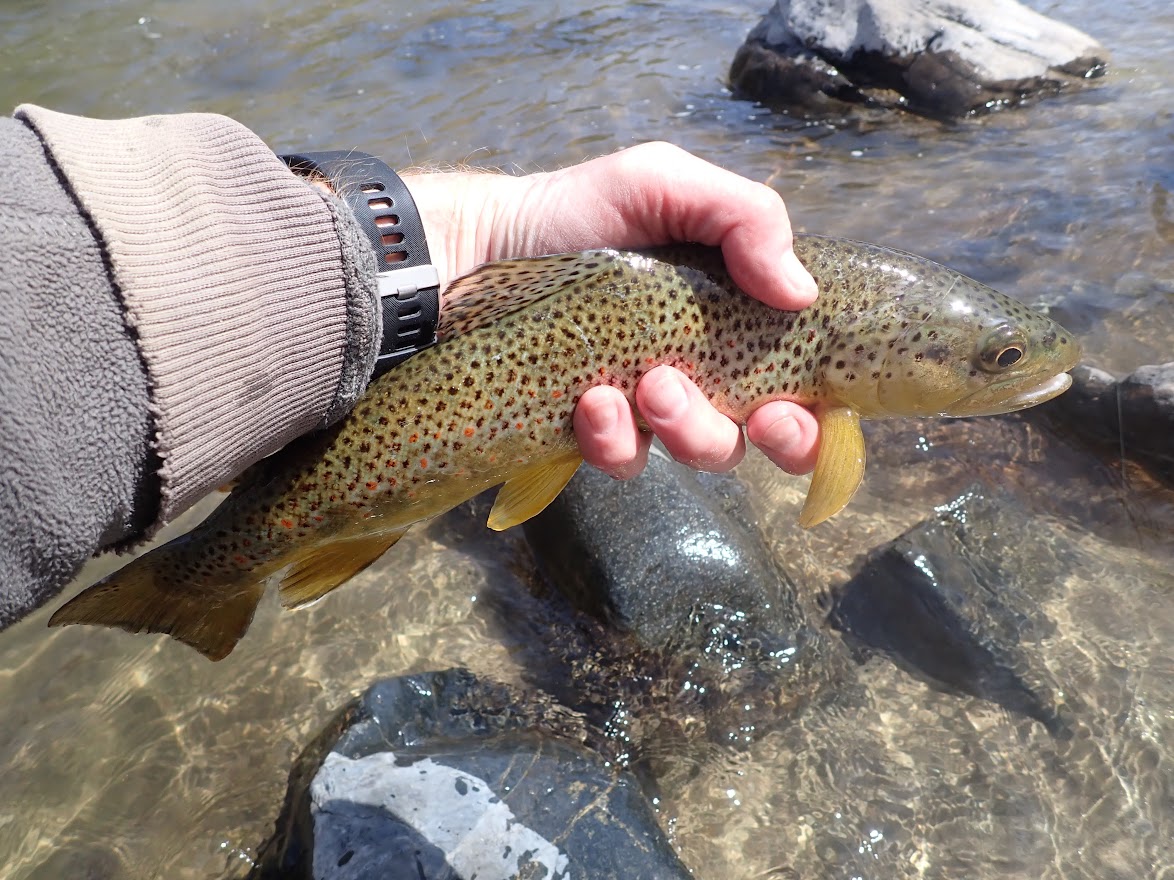 I added two more brown trout to the count in the hour after lunch, but then I experienced a fairly long period of futility. The sun warmed the air temperature, and I was a bit overheated in my down hoodie, and this, in turn, created a state of lethargy. I was hot and tired and bored with the lack of action. The two trout landed in the aftermath of lunch both consumed the sparkle wing RS2, as I lifted the rod to initiate a new cast. 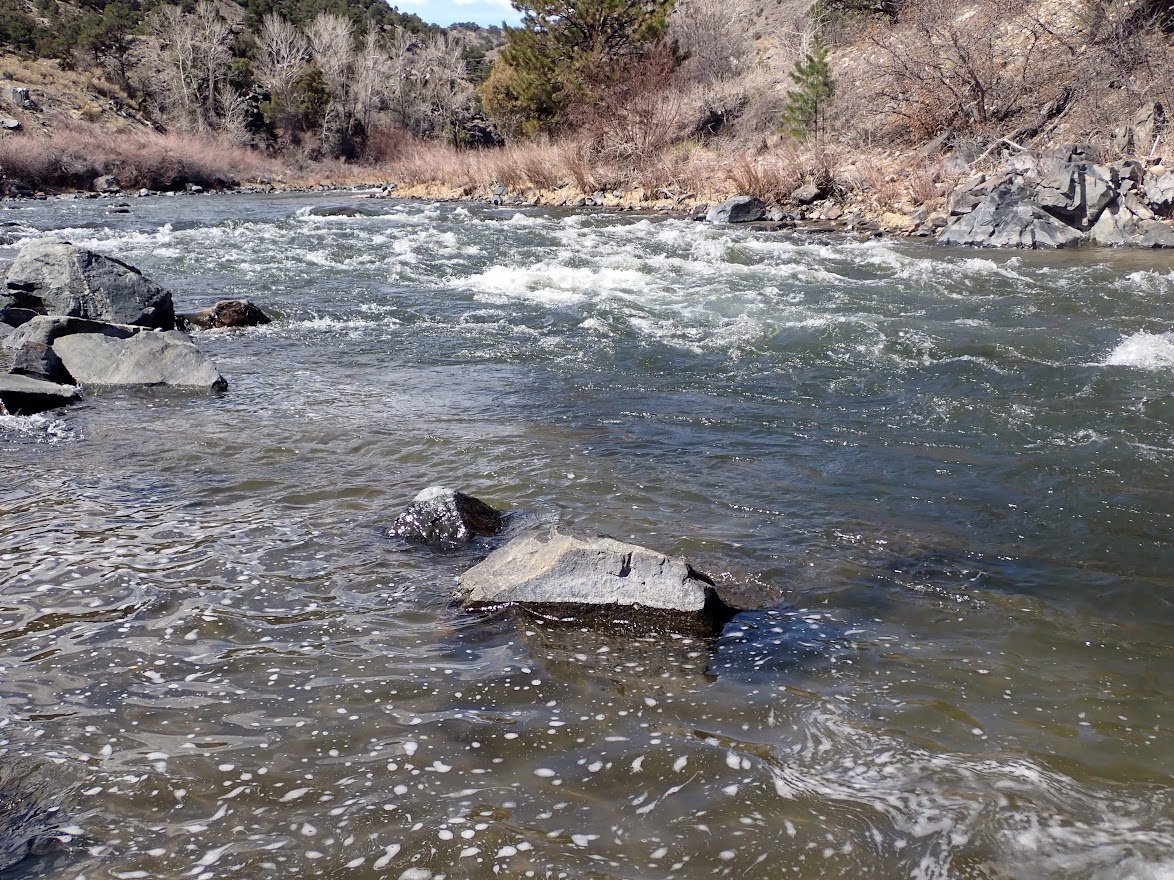 Trough Next to Fast Water Was Prime

Rather that continue fruitless casting I decided to finally make a significant change in approach, and I switched to a dry/dropper method. I tied on a yellow size 8 fat Albert and added an emerald caddis pupa and a size 20 soft hackle emerger. I decided to focus my casts on the soft water with depth near the bank, as this was the type of structure, in which I spotted decent trout in the earlier time period. The strategy seemed applicable, but I managed one thirteen inch brown on the emerald caddis pupa, and then sank into another state of inactivity. 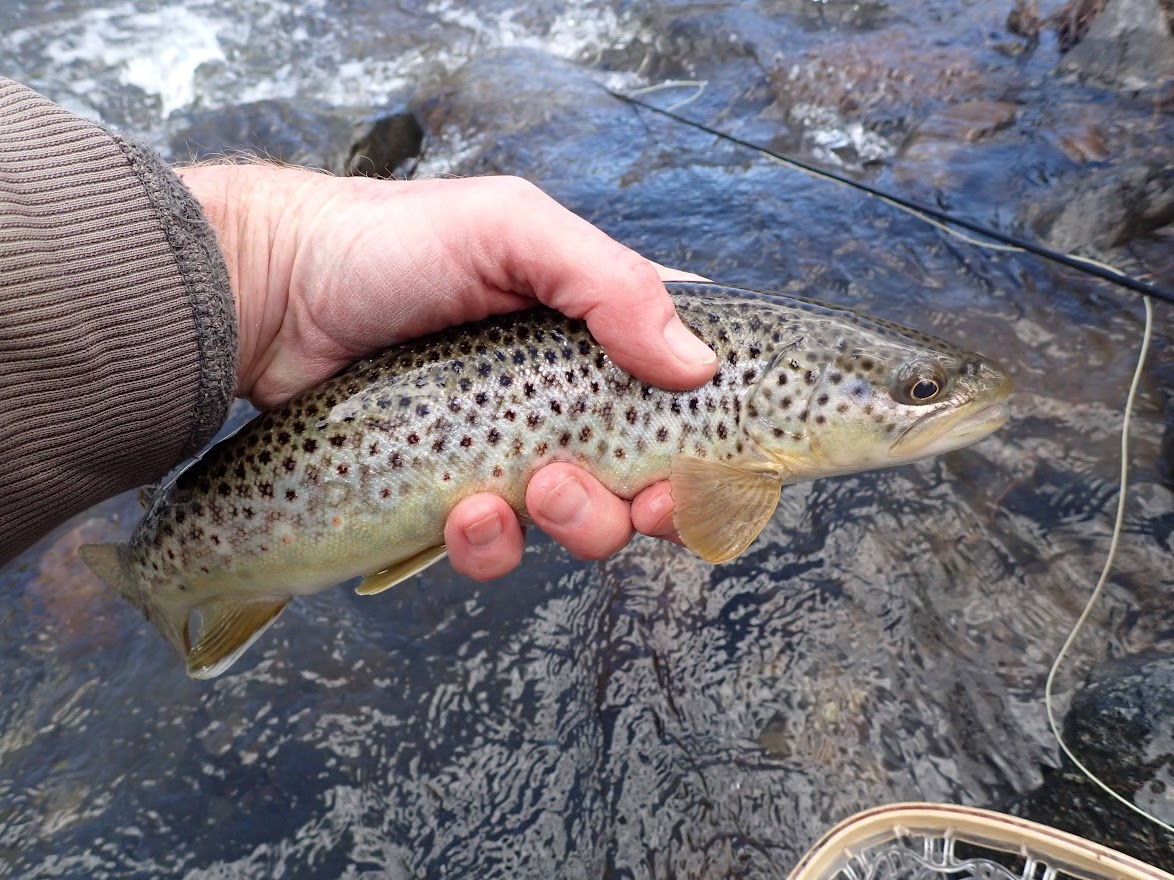 At 3PM I acknowledged the ineffectiveness of the dry/dropper method and reverted to the deep nymphing technique. For this last phase of my fly fishing day I opted for a 20 incher and a sparkle wing RS2, and I covered quite a bit of stream real estate, as I guided two more typical sized brown trout to my net. The first of the pair snatched the sparkle wing, and the second chomped the 20 incher. By 4PM I reached a section of rapids, and I was near a path that led to the highway, so I called it a day and made the .5 mile return hike. 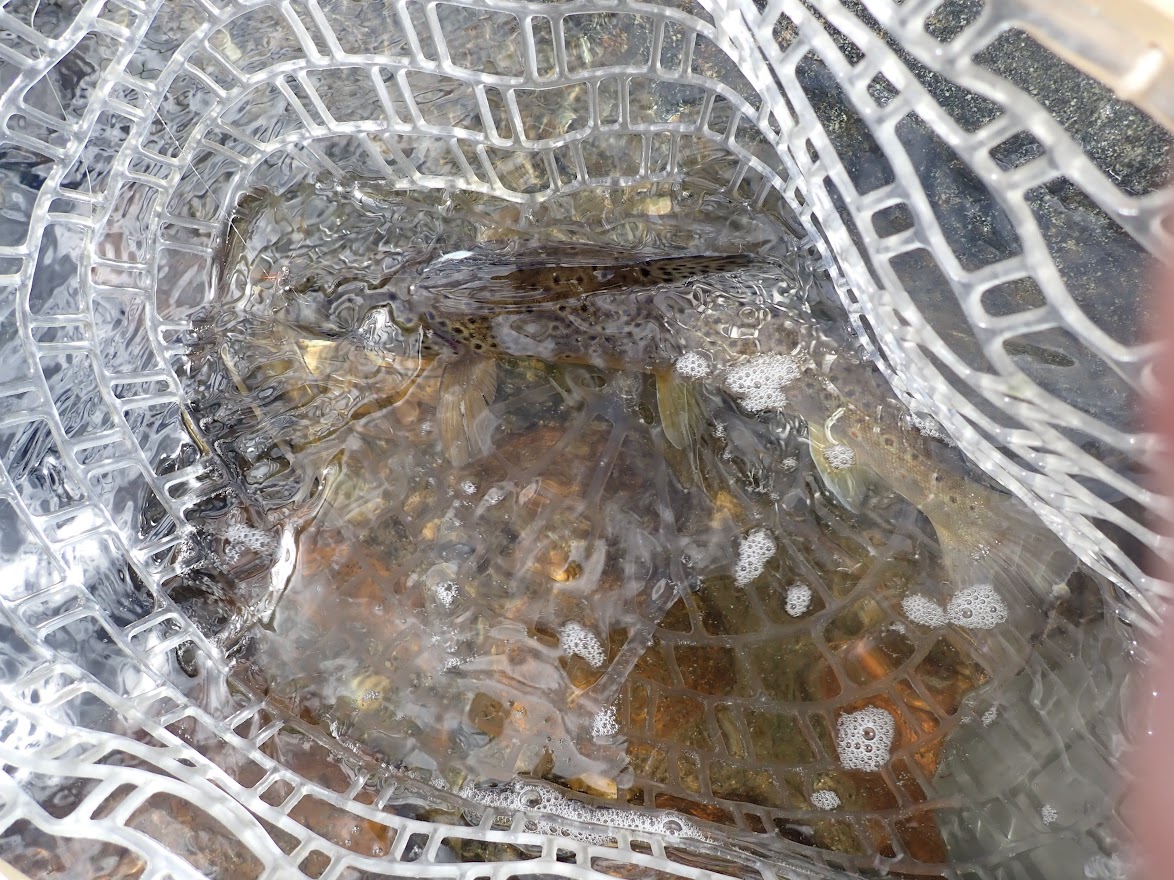 One More in the Net

I landed seven trout on Friday, April 2, and five nipped a form of RS2, one snatched a caddis pupa, and the final one crunched a 20 incher stonefly. All but one of the landed trout measured in the twelve to thirteen inch range. My catch rate was low, and I was disappointed to not encounter a denser and more sustained blue winged olive hatch, but Friday was a stunning spring day accompanied by a brilliant, cloudless blue sky and a high temperature around seventy degrees. I doubled my cumulative fish count, and the fly fishing bug assumed a prominent position in my brain. Nice weather in the upcoming week portends a few more fly fishing outings.