My fishing adventure took place on Sunday, but this saga begins on Saturday, St. Patrick’s Day. I receive a regular email from the Blue Quill Angler in Evergreen, and I noticed a presentation was scheduled for March 17 on fishing Clear Creek. Each of the last three seasons I’ve increasingly visited Clear Creek as it is probably the quickest location I can get to for an afternoon or evening of fishing. A young guide who operates out of Blue Quill Angler named Cody Scott made a great presentation and I recorded some helpful notes on places to fish that I haven’t explored yet as well as suggestions on technique and flies for the different seasons of the year. I’m quite anxious to put Cody’s recommendations to the test.

I also received an electronic newsletter from Royal Gorge Anglers in Canon City. This shop is owned by Taylor Edrington, the fishing travel agent that I used for my Alaska trip and the same agent that Jane and I are using for a December trip to Argentina. Taylor’s recent email announced that his shop was moving from downtown Canon City to a new location along route 50 on the way to Royal Gorge, and he was having an open house on Sunday, March 18.

Jane and I decided to check the new place out, so we packed up the car with fishing gear as well as Jane’s mountain bike and headed south. The plan was to stop for lunch in Canon City and then check out Taylor’s new shop. Jane would then drop me off along the Arkansas River and return to Canon City to ride her bike on the river pathway. As we drove west toward Canon City we noticed a thick haze over the river valley created by all the wind stirring up the dust. The dust was so thick that it made the sky seem like an overcast cloudy day.

We stopped at a Subway in Canon City and picked up sandwiches for lunch and then drove a couple miles to the new Royal Gorge Anglers. Taylor was right inside the door, and Jane and I chatted with him a bit and browsed the store and left. There were a lot of people there, so we didn’t want to bother Taylor too long.

Next I decided to fish in the canyon west of Royal Gorge and Parkdale so we headed west on route 50 to a nice long pullout just before the bend that precedes the Spike Buck access parking lot. Jane and I climbed down some rocks to a perch above the river and ate our lunch sheltered somewhat from the severe wind. The wind was so bad that Jane decided to remain near the car and read while I fished rather than battling headwinds on her bike. 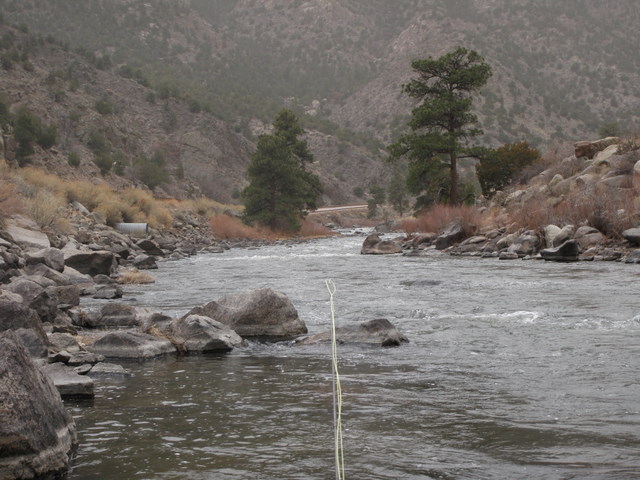 The Stretch of River I Fished

I gathered my fishing gear and prepared to hike up the highway a bit to a spot where the bank wasn’t as steep. I descended to the river and decided to begin with a Chernobyl ant trailing a beadhead hares ear and beadhead RS2. The Royal Gorge fishing report suggested going deep with golden stonefly nymphs, baetis nymphs and midge larva, but I wanted to try the dry dropper before dredging the bottom. I fished in this manner for perhaps half an hour with no success whatsoever, and I was having great difficulty punching 15 foot casts into the heavy wind. 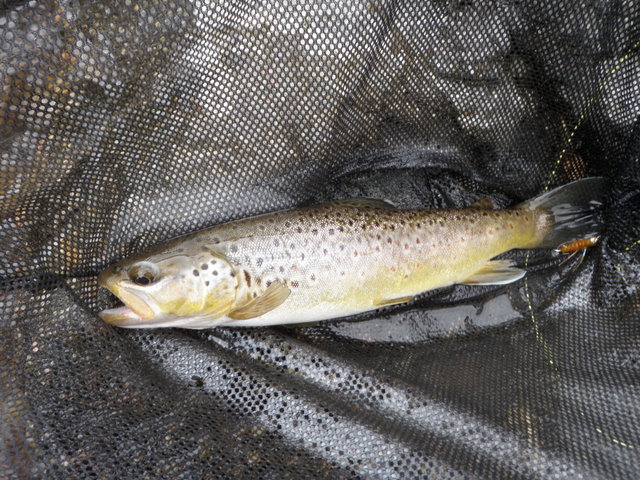 I decided to change strategy and went to a strike indicator and split shot above the BHHE and RS2. I began working the 10 – 15 feet of water along the bank and finally saw a pause and felt a momentary hook up at the tail of a deep run. While this was going on the sky was clouding up in addition to the layer of dust, and I thought I noticed an occasional BWO. I continued to cover quite a bit of water without any success so I decided to go with the store recommendation. I clipped off the beadhead hares ear  replaced with an Arkansas rubber leg that I’d purchased in the spring of 2011. I only had one of this style of fly, but felt it would best imitate the molting golden stoneflies. I added the beadhead RS2 to the bend of the stonefly and began casting to the likely runs along the bank. 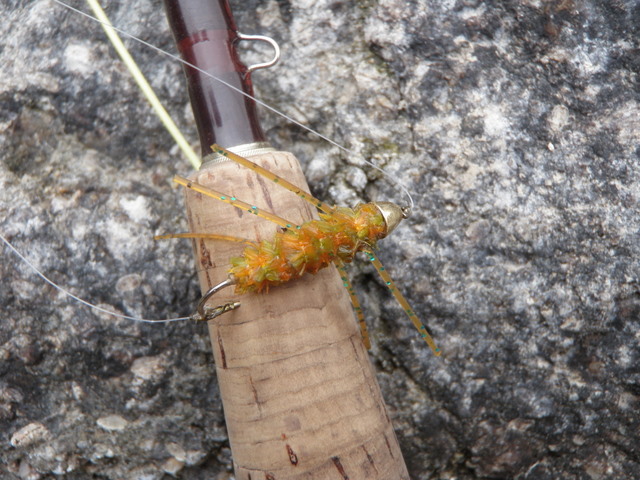 It worked. In short order I nailed a brown as I began to lift my line and discovered that the first brown of the day had sucked in the RS2. Next I hooked another fish that was able to free itself in the current below me. But action was definitely beginning to pick up and in a slower moving area below some big boulders, the indicator paused and I set the hook and played in another brown that took the Arkansas rubber legs. For the next hour I moved fairly rapidly up the bank along the river making two to three casts to each likely run and in the process landed another six fish. They were mainly in the 9-11 inch size range with the last probably measuring out at a foot. Of the eight fish landed, three were tricked by the Arkansas rubber legs and the other five had the tiny RS2 in their lip. I also had a couple foul hooked fish and two long distance releases. 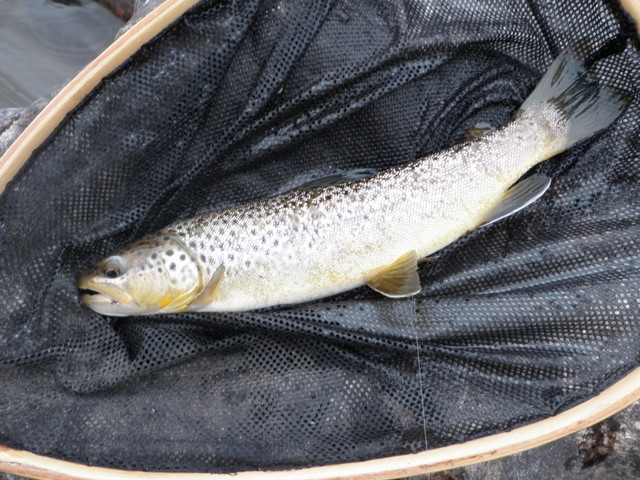 Perhaps the Nicest Fish of the Day

Toward 4PM the sky got even darker and it began to drizzle as the wind continued to whip down the canyon. I released my last fish at 4:08 and hustled up the bank and returned to Jane for the drive back to Denver.