In response to the corona virus Colorado governor Jared Polis issued a stay at home order that took effect on March 26, but the the document allows residents “to travel to outdoor areas for hiking and exercise” while maintaining social distancing. I rarely get within six feet of anyone, when I undertake one of my fly fishing trips, so I decided to take the plunge with a drive to the Arkanasas River on Tuesday, March 31, 2020. I topped off the gas tank the day before, and this allowed me to make the three hundred mile round trip without stopping for fuel; and this action further avoided contact with human beings or shared public surfaces such as gas pumps.

March 31 also happened to be the last day that my 2019 fishing license was valid, so I made a mental note to purchase a new license online, when I returned. During my day on the river I saw three other anglers, but they remained on the opposite side of the river, and therefore, a safe distance away. 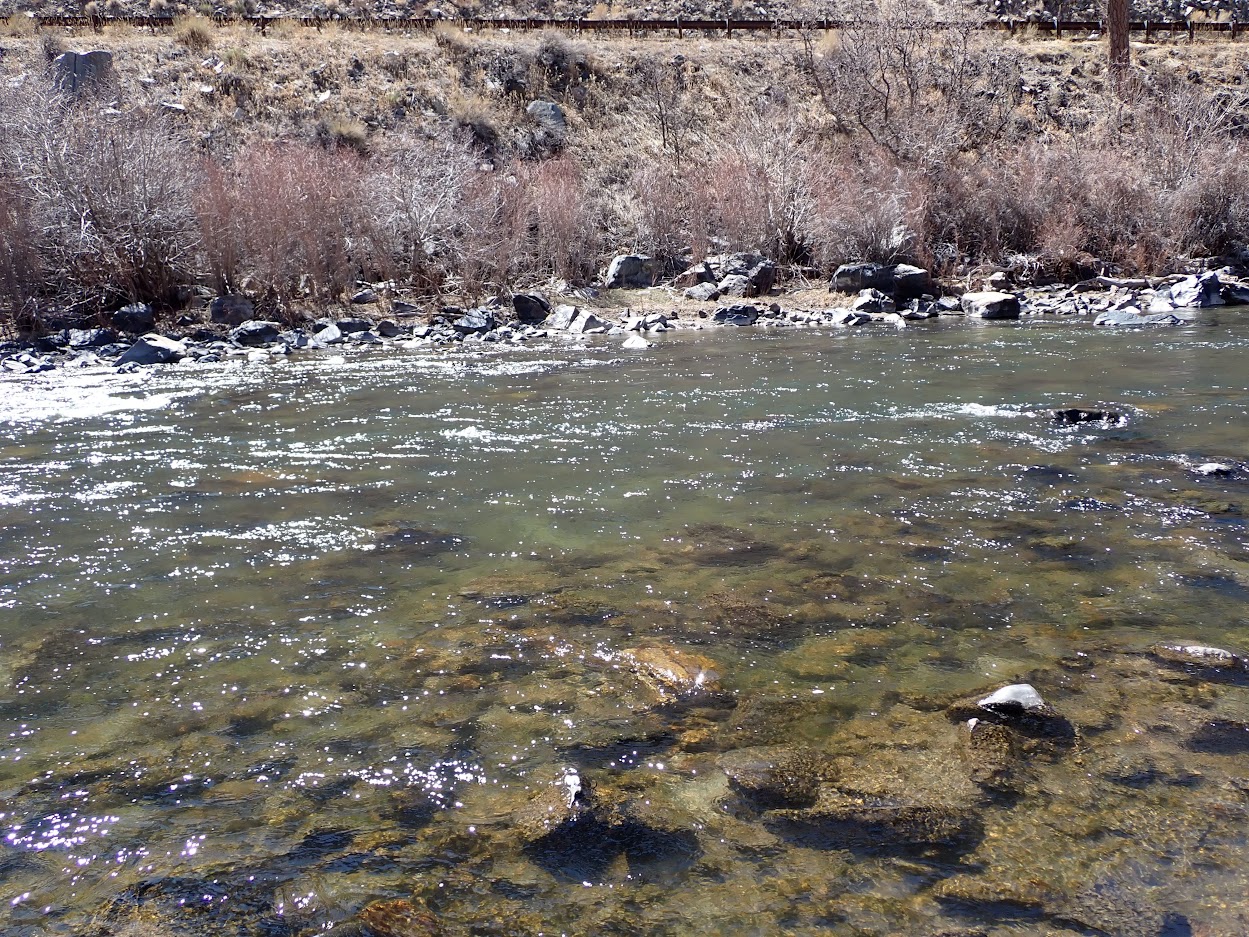 When I arrived at my favorite pullout along U.S. 50, I assembled my Sage four weight and pulled on my light down parka, which I wore during my entire time on the river. It was 51 degrees, when I began at 11AM, and by the time I finished at 4PM, it was 60 degrees. The weather was partly sunny, but the wind was ridiculous. I spent the entire day casting upstream into a head wind; and miraculously my arm, wrist and elbow remained in one piece. The true test of my early season physical endurance will be the state of my body when I awake Wednesday morning. 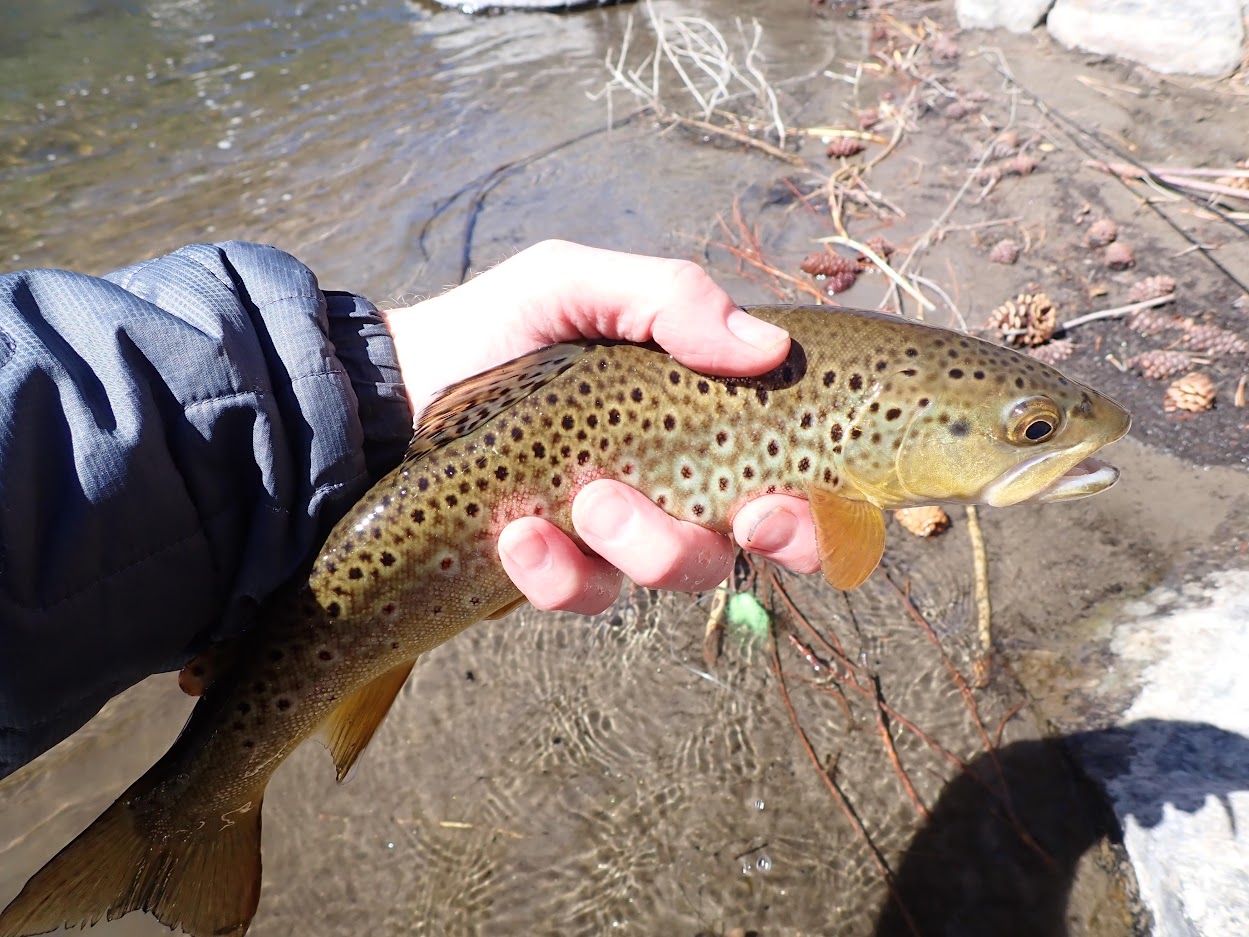 I waded across the river at my usual crossing point at the tail of the long pool next to where I parked, and when I attained the bank across from the highway, I rigged with a New Zealand strike indicator, split shot, 20 incher and sparkle wing RS2. Between 11AM and noon, when I broke for lunch, I landed two brown trout. The first nabbed the RS2, as it began to swing through a deep trough, and this brown was a decent twelve inch fish. The second brown trout was around nine inches, and it grabbed the 20 incher, as I began to lift in a relatively short pocket next to the bank. 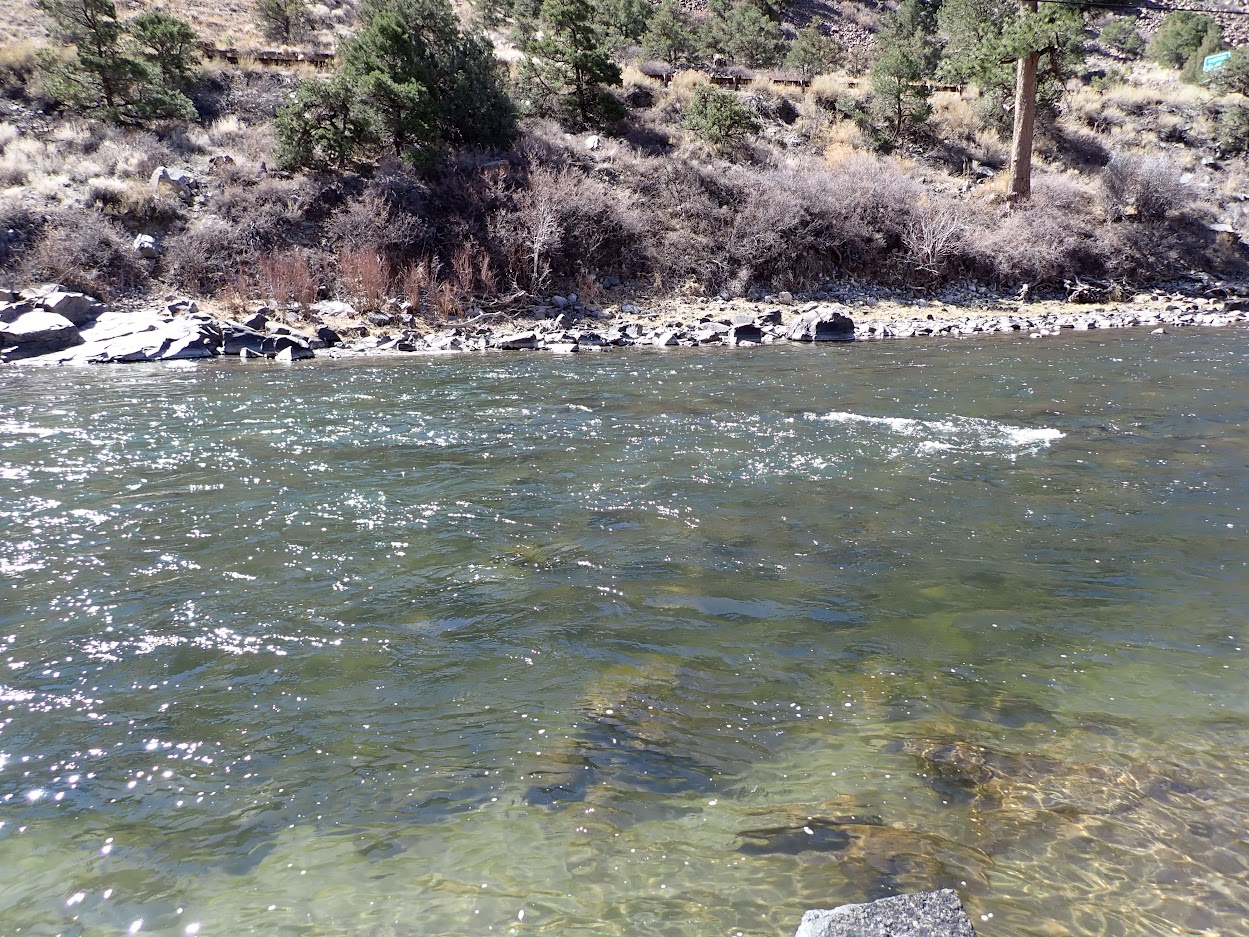 After lunch I continued west along the north bank, and after a fairly lengthy dead period, I landed a long but skinny brown that nipped the sparkle wing RS2. During the unproductive time I added a second split shot to my line in an effort to get the flies deeper earlier in the drifts. It was around this time that I snagged on a stick in a deep swift run, and I was forced to snap off both flies in order to avoid bodily harm. The line broke just below the two split shots, so I used the reconfiguration process as an excuse to replace the 20 incher with an iron sally, but I retained a sparkle wing RS2 as my point fly. 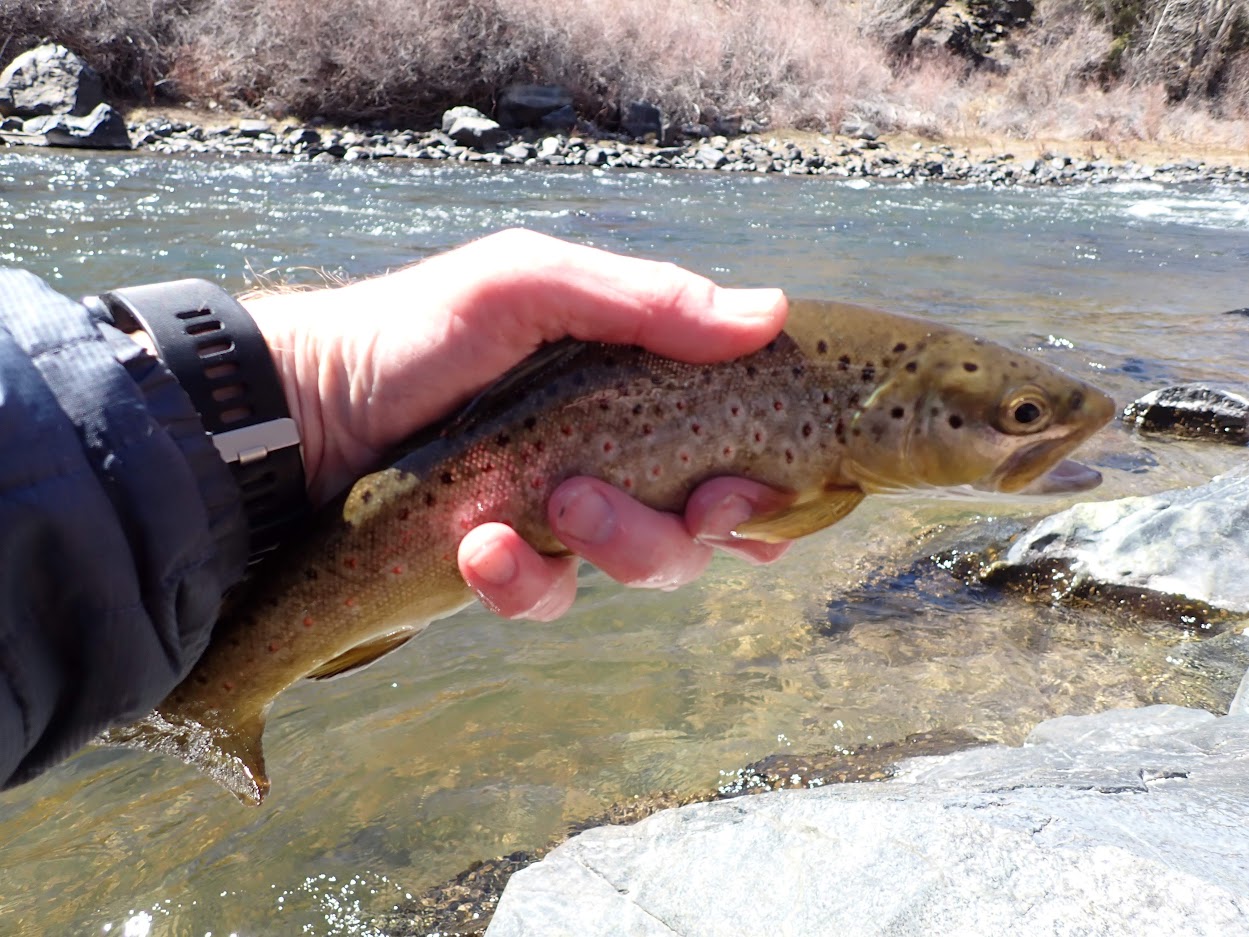 Over the last three hours I landed six additional brown trout to raise the cumulative total fish count for the day to nine. Among these catches was a fine fifteen inch fish that crushed the iron sally, as the flies drifted through a deep run next to a large exposed rock. Most of the remaining fish were healthy browns in the twelve inch range. 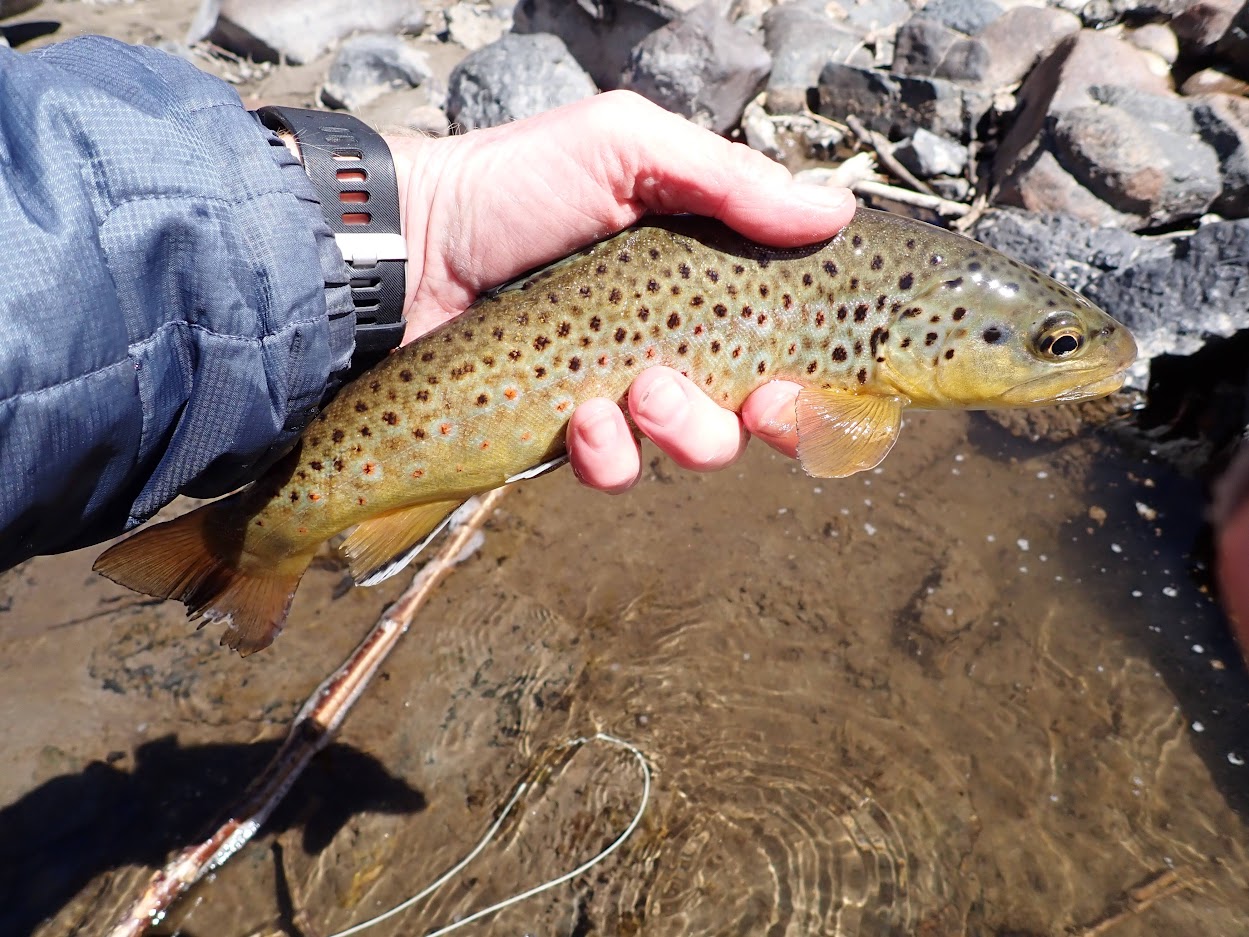 The wind during the morning hour was a nuisance, but the afternoon gusts were even more intense. At one point I netted a fish and waded to a rock along the north bank to photograph and release it. I removed my sun glove and rested it on a rock, while I handled the trout for a photo. I was about to press the camera button, when a strong gust blew my hat off my head, in spite of it being tethered to my coat. The hat landed crown side down, and I thought it was going to rest next to a rock, but it immediately began to curl into some faster current. I quickly deposited my disconnected net containing a trout in some shallow water and lunged downstream to snag my slowly escaping hat. Meanwhile, another blast of air lifted my sun glove into the water, but miraculously the net remained in place, and the trout was still nestled just below the rim. Eventually I placed my wet hat back on my head, snapped a few photos, and shoved my wet sun gloves in my fishing backpack. A simple photo and release session morphed into a battle against the elements. 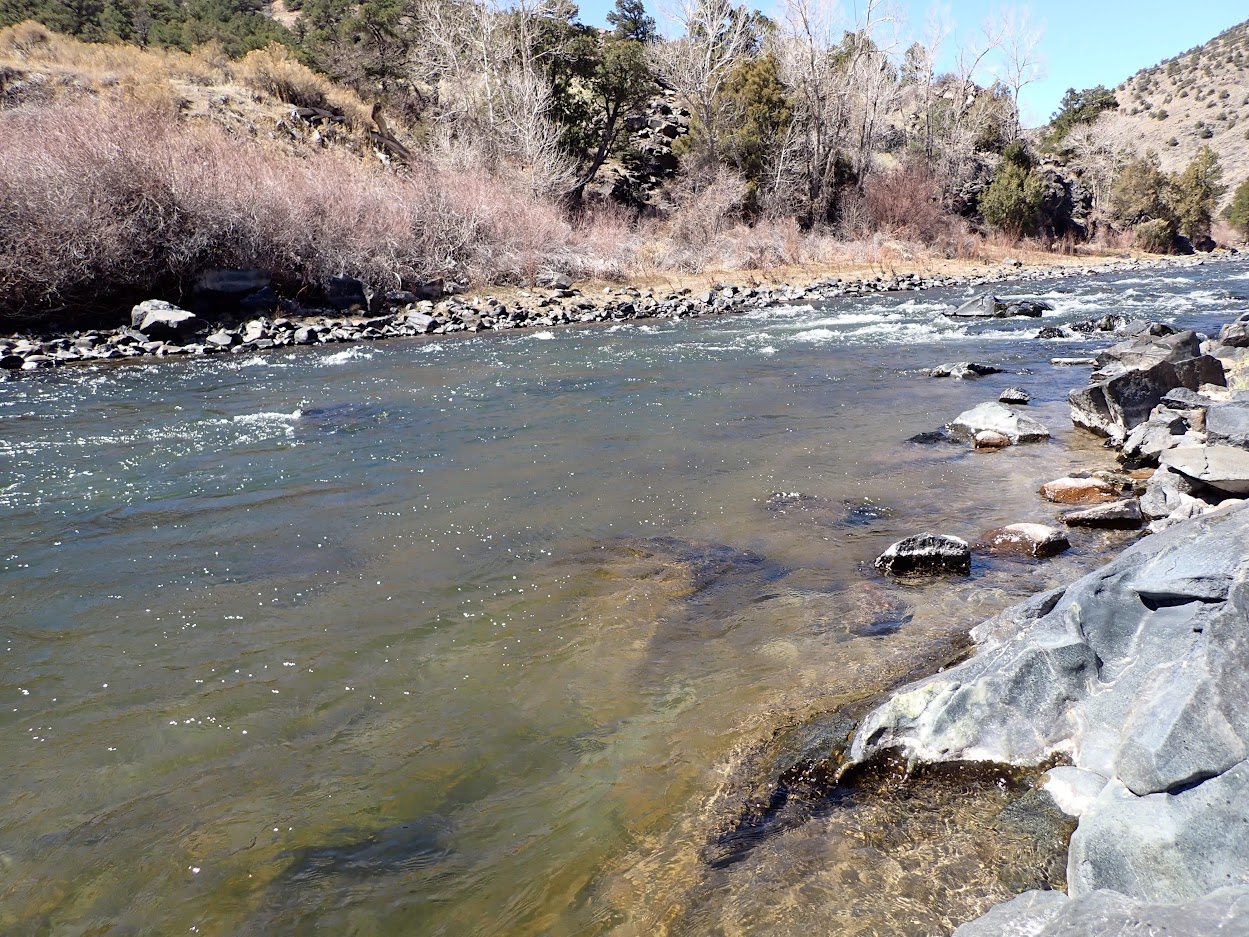 Between 2PM and 3PM I noticed tiny blue winged olive mayflies, but they were instantly swept into the air after spending a minuscule amount of time on the surface. I stuck with the RS2, and all of my afternoon landed fish nabbed the small baetis nymph imitation. In addition, I experienced three temporary connections. The most productive water during Tuesday was riffles and shelf pools that ran at a depth of three to four feet. 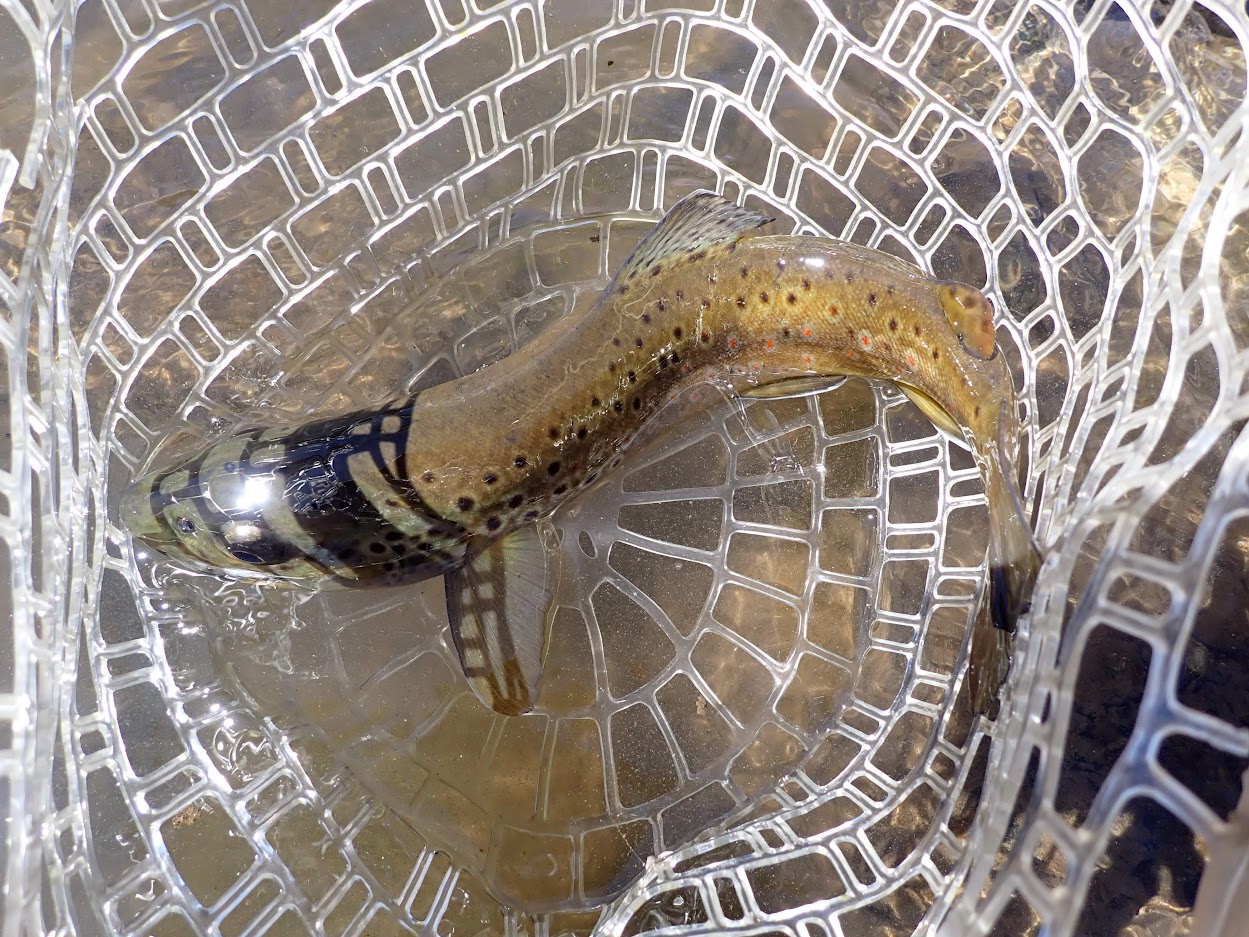 At 3PM I approached a long smooth pool with a slow moving foam line eight feet from the north bank. I paused to observe, and a pair of rises caught my attention. This was a place where the slow current allowed fish to pick off stillborns and cripples; so I removed my indicator, split shots, and flies and converted to a single dry. My fly choice was a Klinkhammer BWO. Unfortunately by the time I made the conversion, the fish stopped rising. After observing for what seemed like an eternity, I launched some prospecting casts between wind gusts, but the small emerger was ignored. 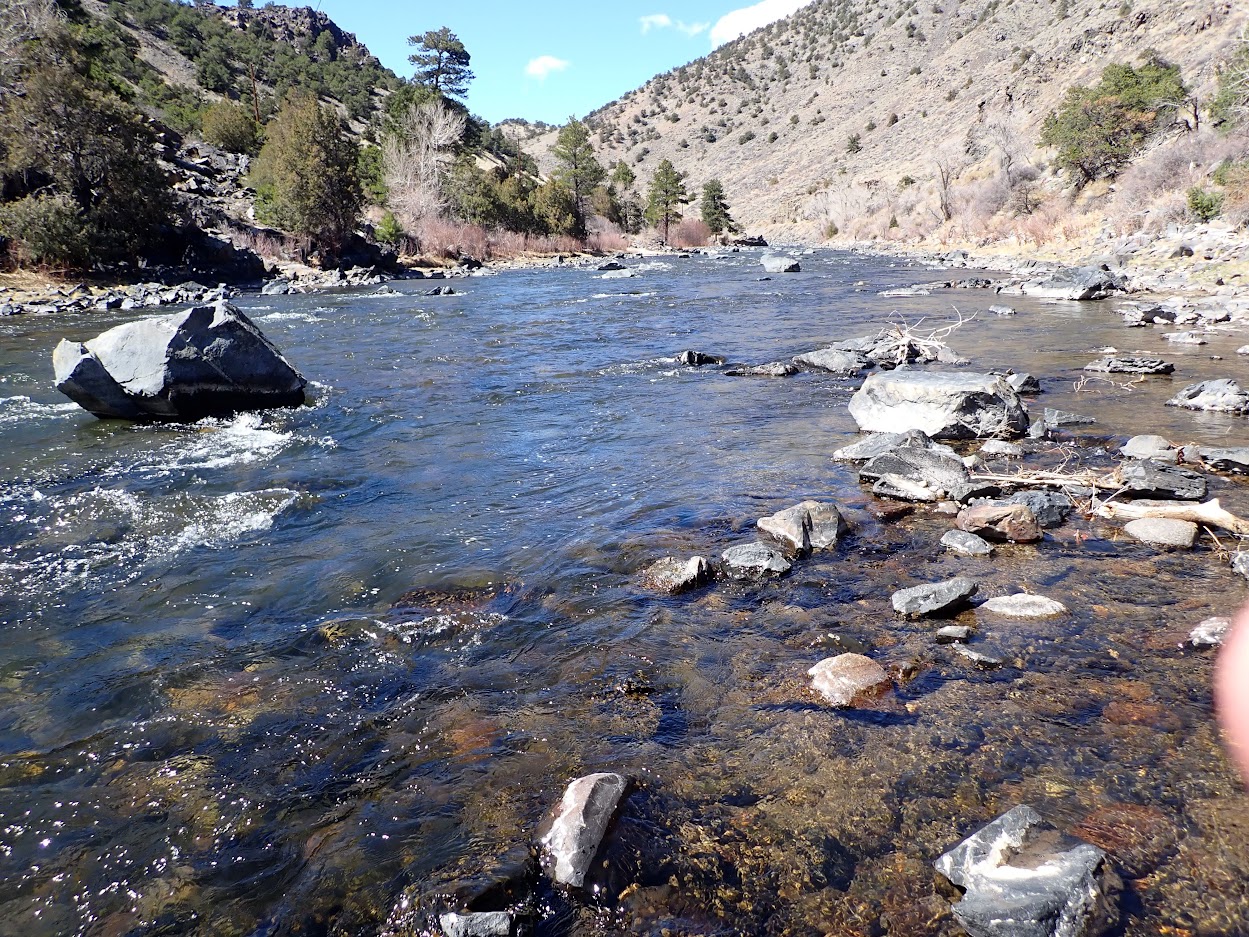 I advanced beyond the deep pool to a short section populated with deep pockets and riffles. This structure was not appropriate for the single dry, and I was averse to revisiting the deep nymphing method, so I quickly went to a yellow fat Albert, iron sally and BWO soft hackle emerger combination. For the last thirty minutes I prospected some nice deep runs among the plentiful exposed rocks, but the trout were either absent or unwilling to sample my offerings.

In spite of the irritating wind Tuesday was a productive day on the Arkansas River. The sparkle wing RS2 took center stage, and I enjoyed steady action, as I progressed .6 stream miles from my start. The size of the netted fish was average for the Arkansas River, but compared to Boulder Creek and the North Fork of St. Vrain Creek they were a welcome upgrade. Because of the constant gusts it was difficult to assess the intensity of the blue winged olive hatch, but I suspect it was surprisingly strong. With seventy degree days in the forecast for early next week, I may undertake a return engagement.