With surgery around the corner and the coronavirus expanding at unprecedented rates, I decided that the best remedy was a trip to a river. Crowd avoidance is a part of the solitary sport of fly fishing and also a recommended defense against the spreading virus. A forecast high temperature of sixty-six degrees in Denver only added to the allure of a day on a stream. My day on the North Fork of St. Vrain Creek on Friday, March 6 was OK, but I yearned for some larger catches. As I searched my options, I settled on the Arkansas River. The high temperature for Salida was forecast to be 59 degrees, and the flows remained steady at 280 CFS over the most recent four days. The fly shop reports suggested nymphing the deeper slow moving areas with the possibility of afternoon dry fly action on midges. Blue winged olives were not yet present, but stream samples indicated that nymphs were active, and emergence was around the corner. Unfortunately Salida required six hours of round trip driving, so I packed clothing, in case the action was hot, and I decided to stay over and fish again on Thursday.

I arrived at my selected pullout by 11:30AM, and after gearing up and assembling my Sage four weight. my watch displayed 11:45, so I devoured my lunch rather than pack it along on my back. Once the last spoonful of yogurt was swallowed, I carefully negotiated my way down a steep bank and crossed the river and then hiked along the railroad tracks for .4 mile to a favorite starting point. I was convinced that deep nymphing with a strike indicator was likely my prevalent technique for the early March outing, but a relatively shallow side channel on the north side of the river convinced me to try the dry/dropper approach before making the relatively time consuming conversion. 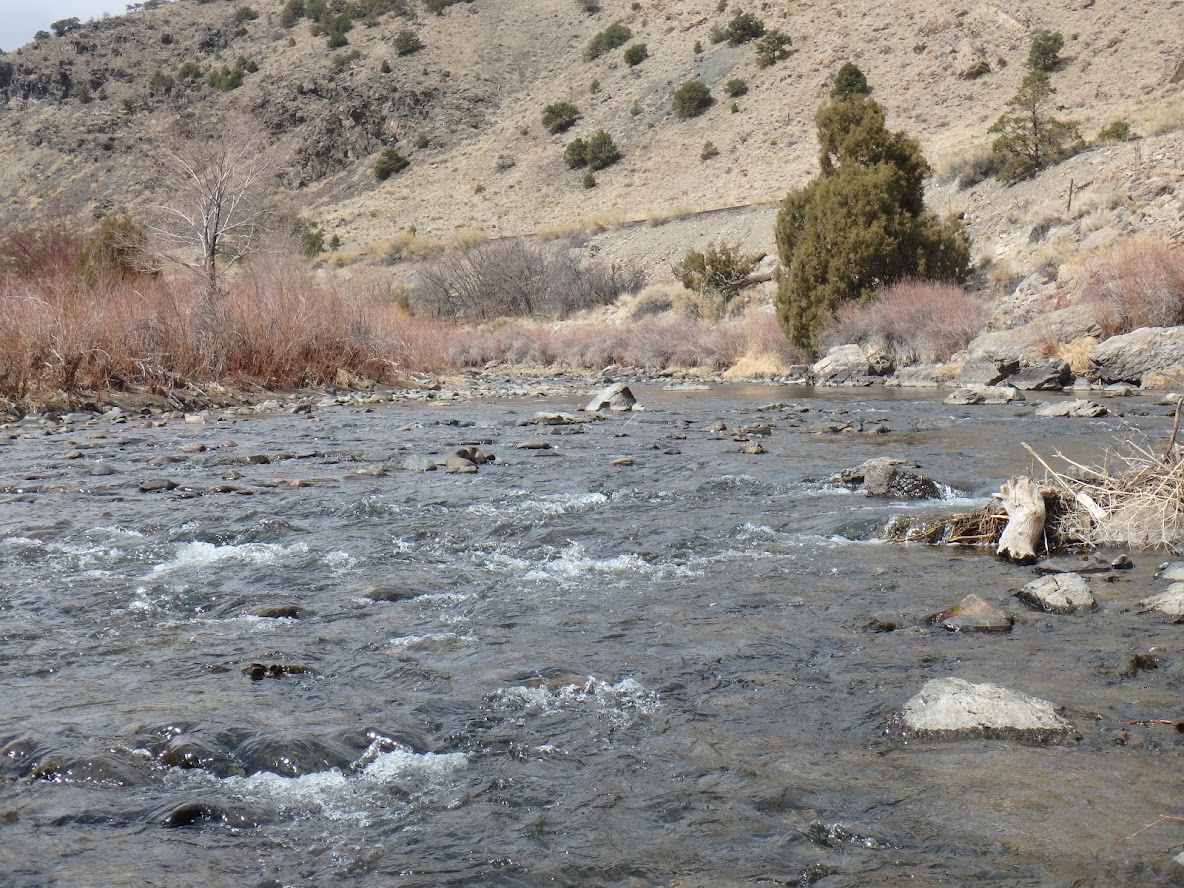 I knotted a tan pool toy hopper to my line and then added a beadhead hares ear and a sparkle wing RS2 to the tippet. I began at the downstream border of the north braid and worked my way up to the long smooth pool without a hint of trout presence. When I established my position at the bottom one-third of the pool, I spotted two fish rising along the subtle center seam near the midpoint of the pool. One of the fish was rising fairly regularly, but the one on the north side of the seam was very sporadic. I debated whether to shift to a single dry fly approach or gamble on the dry/dropper. I made the wrong choice and lobbed the three fly configuration to the top of the pool and allowed it to drift through the area previously occupied by feeding trout. Much to my chagrin the large dry fly put down the risers. I attempted to reverse my misfortune and completed the lengthy task of clipping off the three flies and then extended the leader with some 5X and tied on a size 22 CDC BWO. I was uncertain what small morsel of food created the surface feeding, but a tiny olive is generally a solid choice that covers multiple bases. These were all solid theories, but the previously rising fish ignored my offering as well as the size 18 parachute ant that succeeded the BWO.

I scanned the upper portion of the pool for surface feeding, but it was absent, so I reconfigured the dry/dropper, albeit with a Pat’s rubber legs and a classic RS2. I progressed upstream along the north braid and cast to some very attractive faster runs, but I only managed to spook a couple nice fish. In hindsight, I wish I had tried a midge larva instead of the RS2, since it was still fairly early in the day, and no evidence of blue winged olives existed. 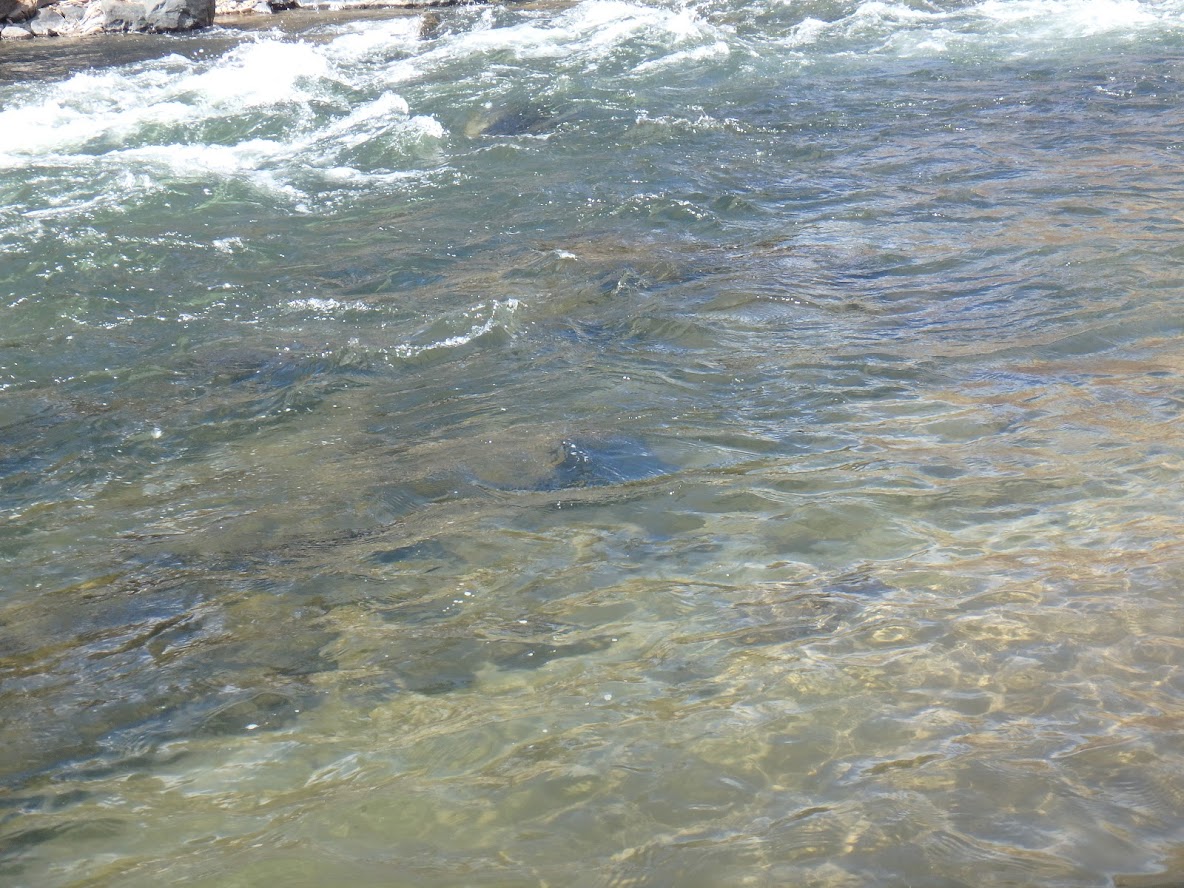 Site of Fish Number One Take

Once I reached the top of the run, I reversed my direction and ambled downstream along the north bank, until I reached my normal starting point; a gorgeous deep run with a large shelf pool on my side of the river. For this deeper water I decided to implement my deep nymphing approach, and I reconfigured with a split shot, 20 incher and sparkle wing RS2. Other than a period when I substituted a pheasant tail for the RS2, these flies remained my workhorse offerings for the remainder of the day. I deployed a bright green wool tuft from my New Zealand strike indicator kit and dabbed some floatant around the base, where it was attached to the line. 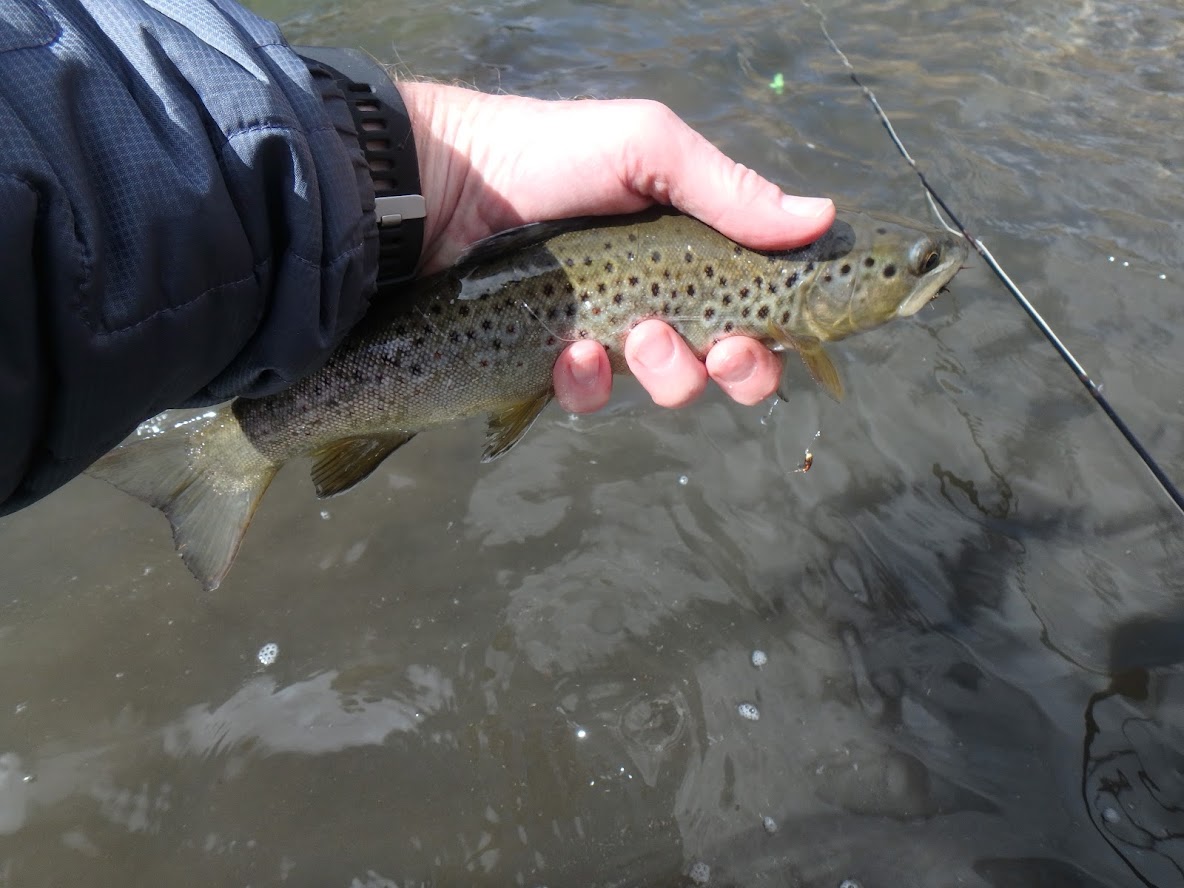 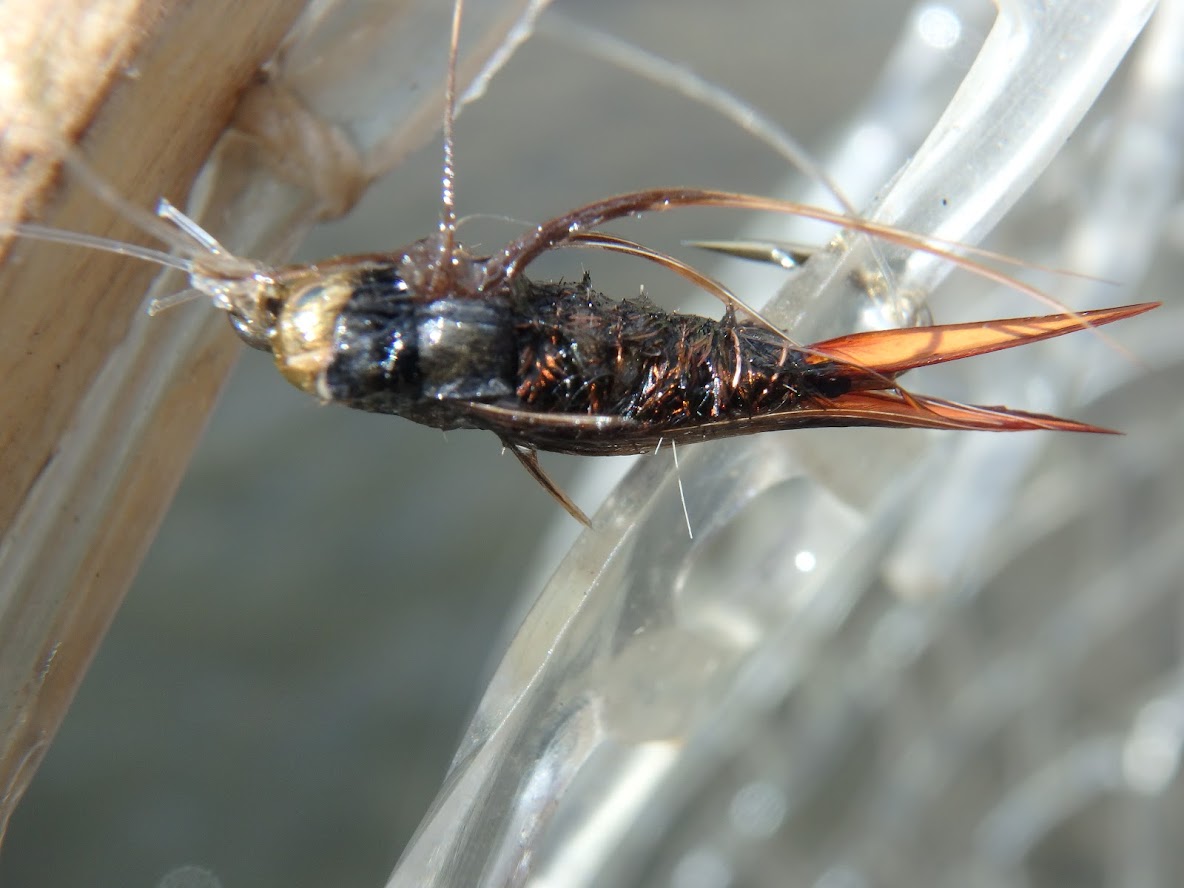 20 Incher Getting It Done

At the top of the shelf pool where some faster water cascaded over some rocks and fanned out into the softer water, the indicator dipped, and I quickly reacted with a hook set. I was very pleased to feel life on the end of my line, and after a brief battle I guided a twelve inch brown trout to my net, as it displayed a 20 incher in its lip. Fifteen minutes later I advanced to a nice deep riffle just below the point of the island that attracted my attention earlier. I prospected this area, and a mirror image twelve inch brown trout grabbed the 20 incher. I was quite pleased that the size 12 2XL nymph was attracting the attention of the brown trout in the Arkansas River in early March. 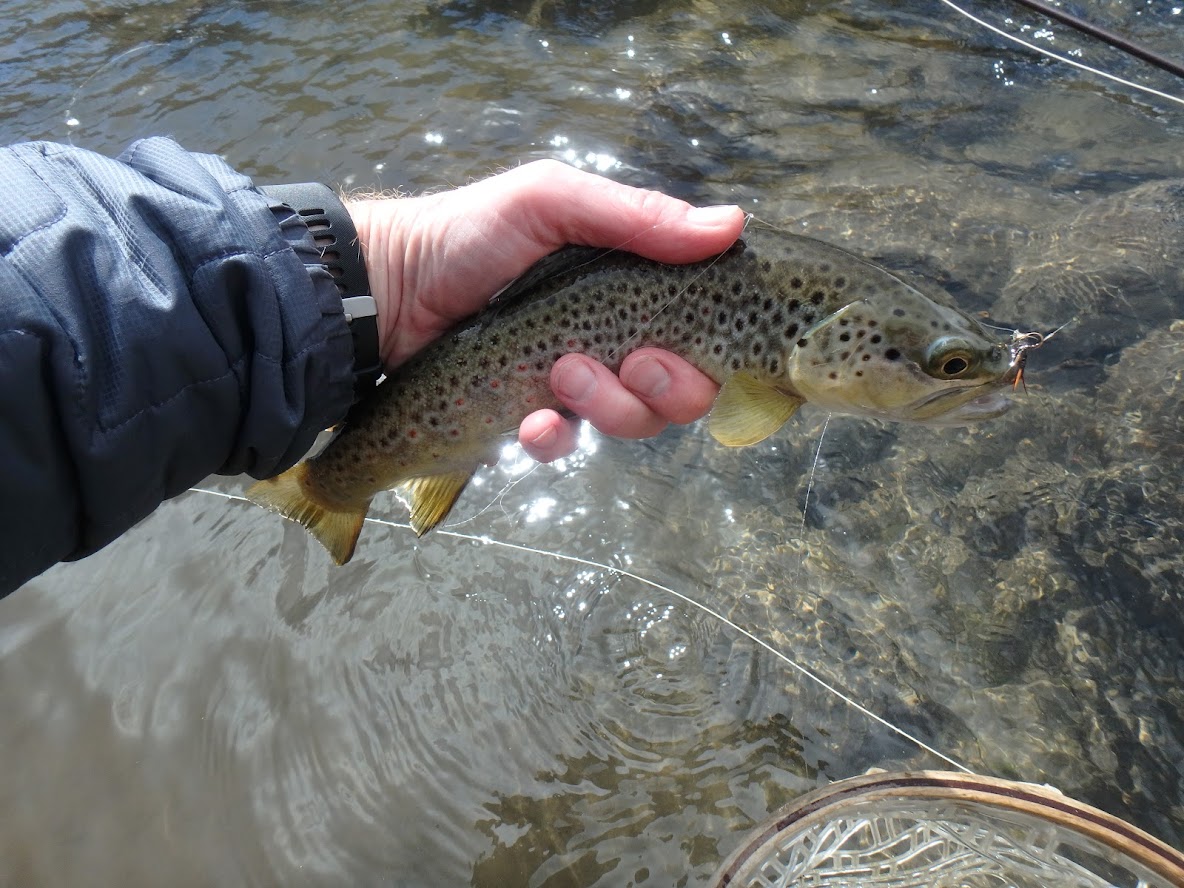 Also a Fan of the 20 Incher 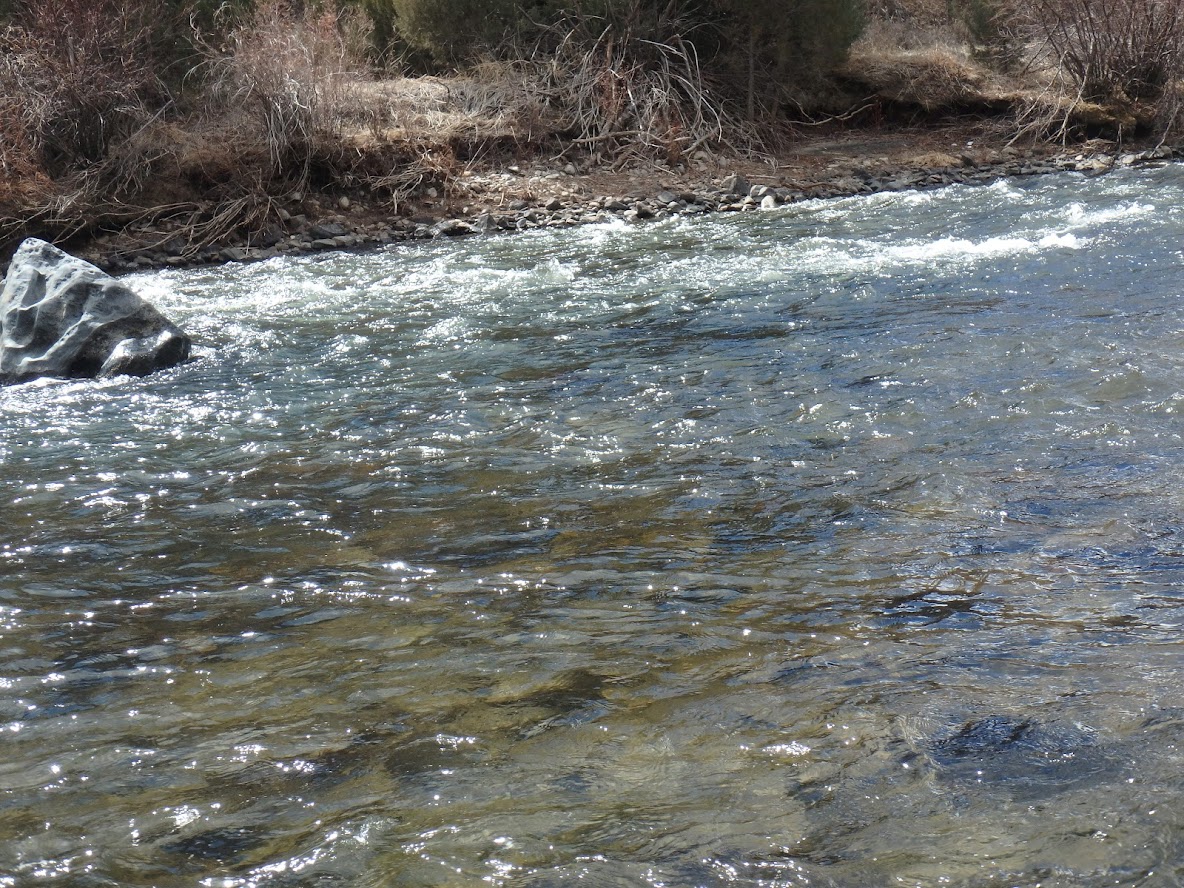 Next I moved up along the left side of the small island, and near the top I temporarily hooked a fish that seemed to favor the RS2. I will never know for certain, but the fight and escape suggest the small size 22 hook. From the top of the island I retreated to the downstream point, and I worked through the north channel a second time with the nymph approach, but as I originally feared, the low clear water was not conducive to the split shot and weighted nymphs. 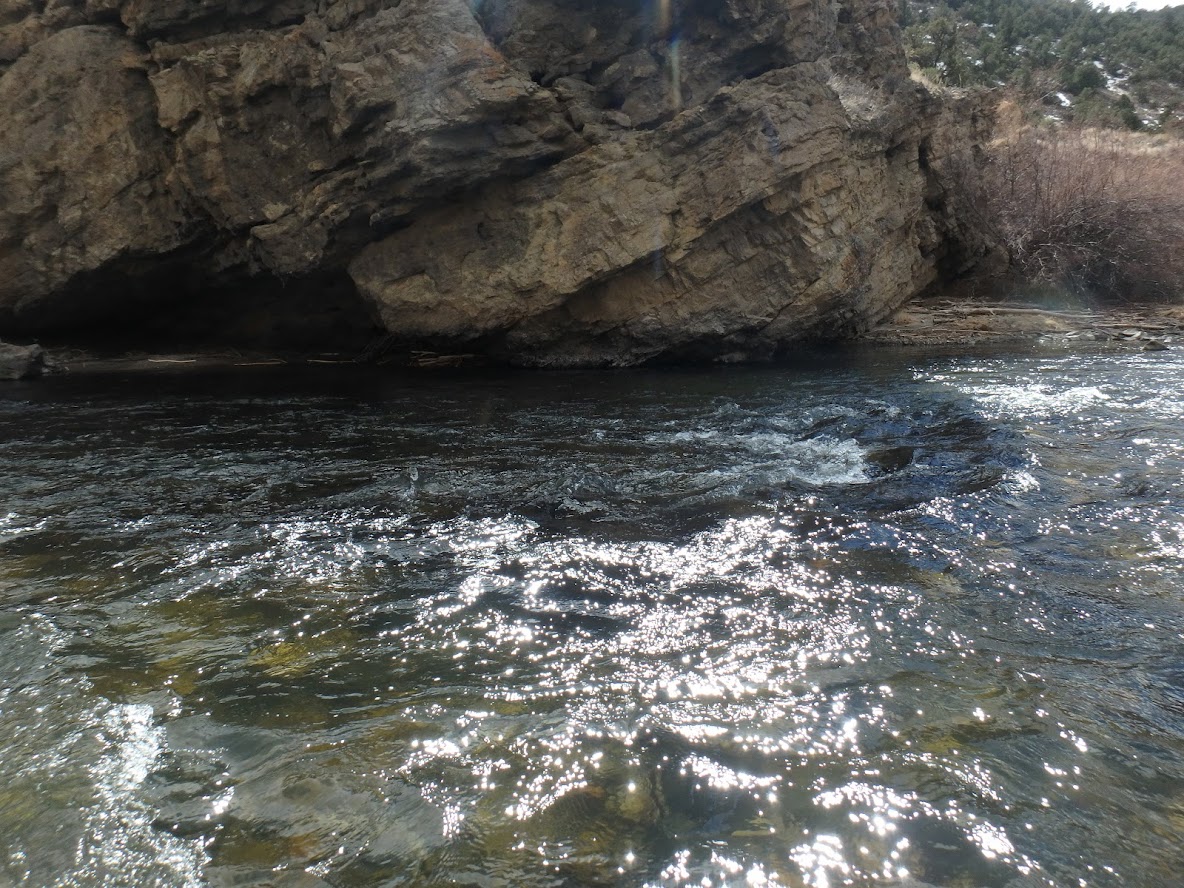 Two Rainbows Dwell in This Area

By 2PM I reached the top of the island and decided to cross to the south side, where the river deflected off a high vertical rock wall. The low flows enabled a careful crossing, and a gorgeous riffle of moderate depth elevated my expectations. On the second cast I felt a strike just as the nymphs began to swing at the end of the drift, and I immediately set. This fish battled up and down the run several times, and when I slid my net beneath it, I marveled at a chunky thirteen inch rainbow. The aggressive rainbow would prove to be my best fish of the day, and it snatched the sparkle wing RS2. Once I photographed and released my prize, I resumed fishing the attractive run, and I covered the ten feet that rolled along the wall more thoroughly. On one of these casts I performed some poor mends which accelerated the nymphs, and another rainbow could not resist the movement of the sparkle wing, and I netted another thirteen inch rainbow. I landed four fish in two hours and endured a pair of long distance releases, so I concluded that my prospects were looking up. My goal was to catch larger fish than achieved on the St. Vrain, and I was on track for completing that objective. 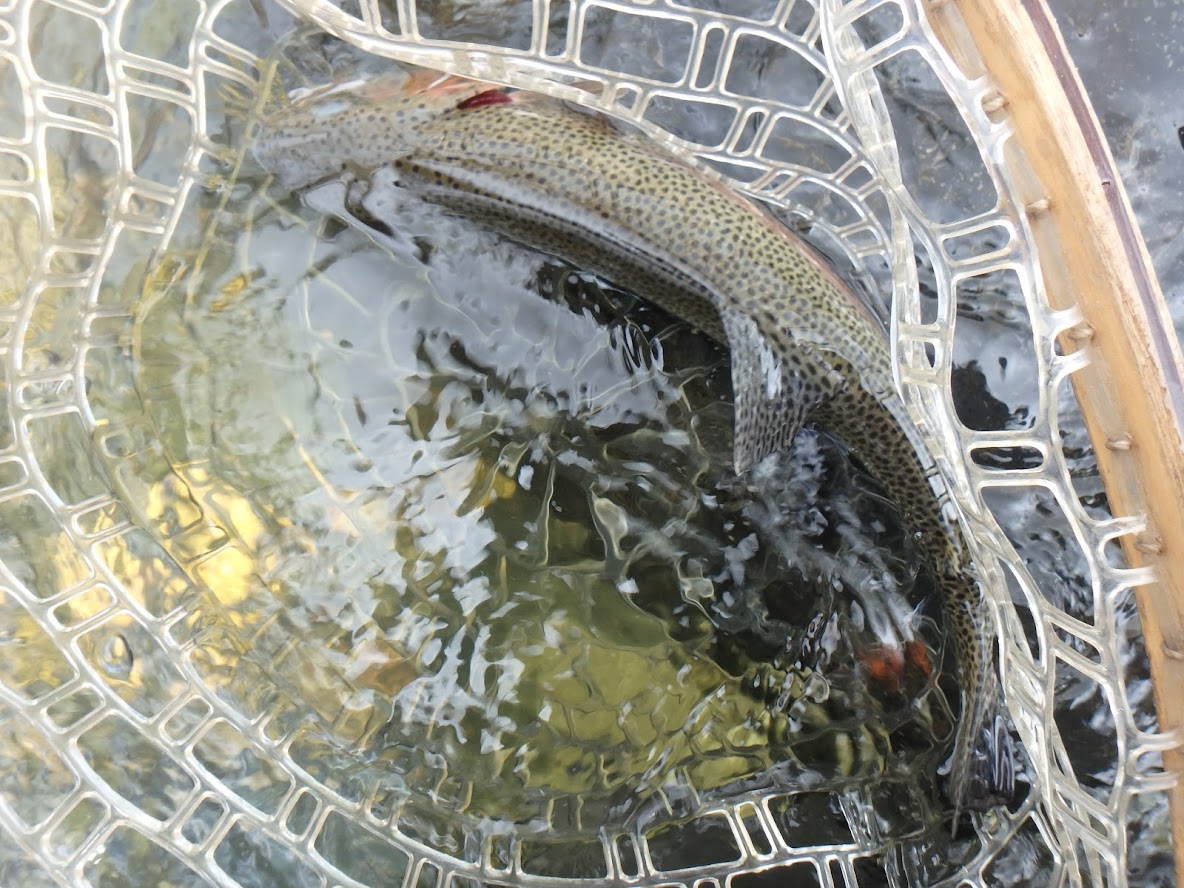 I wish I could report that my catch rate continued, but unfortunately I spent the last two hours advancing upstream for .5 mile, and I added one more twelve inch brown toward the very end of my time on the river. I was very selective about my targeted areas, and held out for slow velocity and moderate depth near faster current or along the bank, but I was not rewarded for my strategic approach. The sun warmed the air considerably and the wind became a negative, but it seemed that the fish disappeared. There was a brief period when olive midges danced along the surface of the river, but other than that, a food source seemed to be absent. I contemplated a streamer, but I was averse to making the changeover late in the day, and stuck with the patterns that produced earlier. I was convinced that the trout were not selective to a specific aquatic insect and surmised that the large 20 incher could once again attract interest. It did not, and I ended my day at 4PM .5 mile upriver from the Santa Fe. 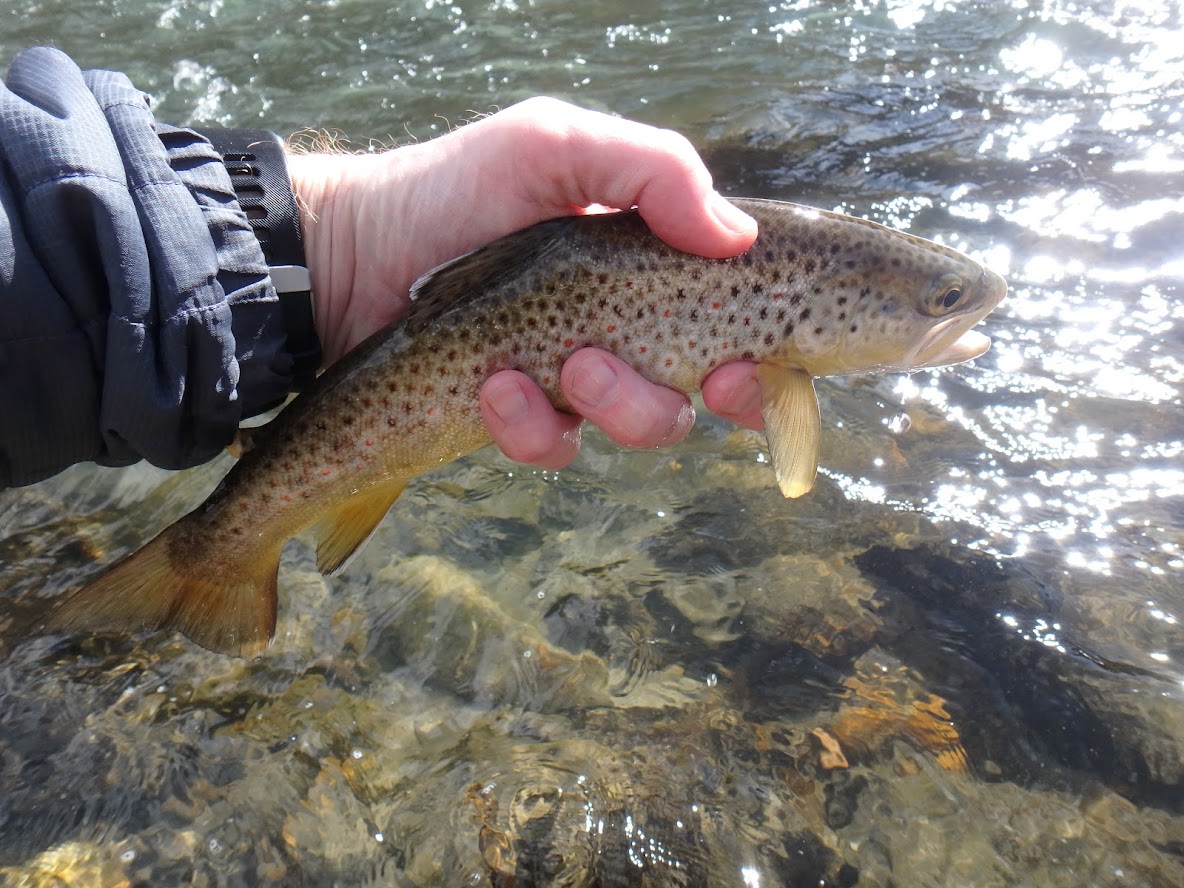 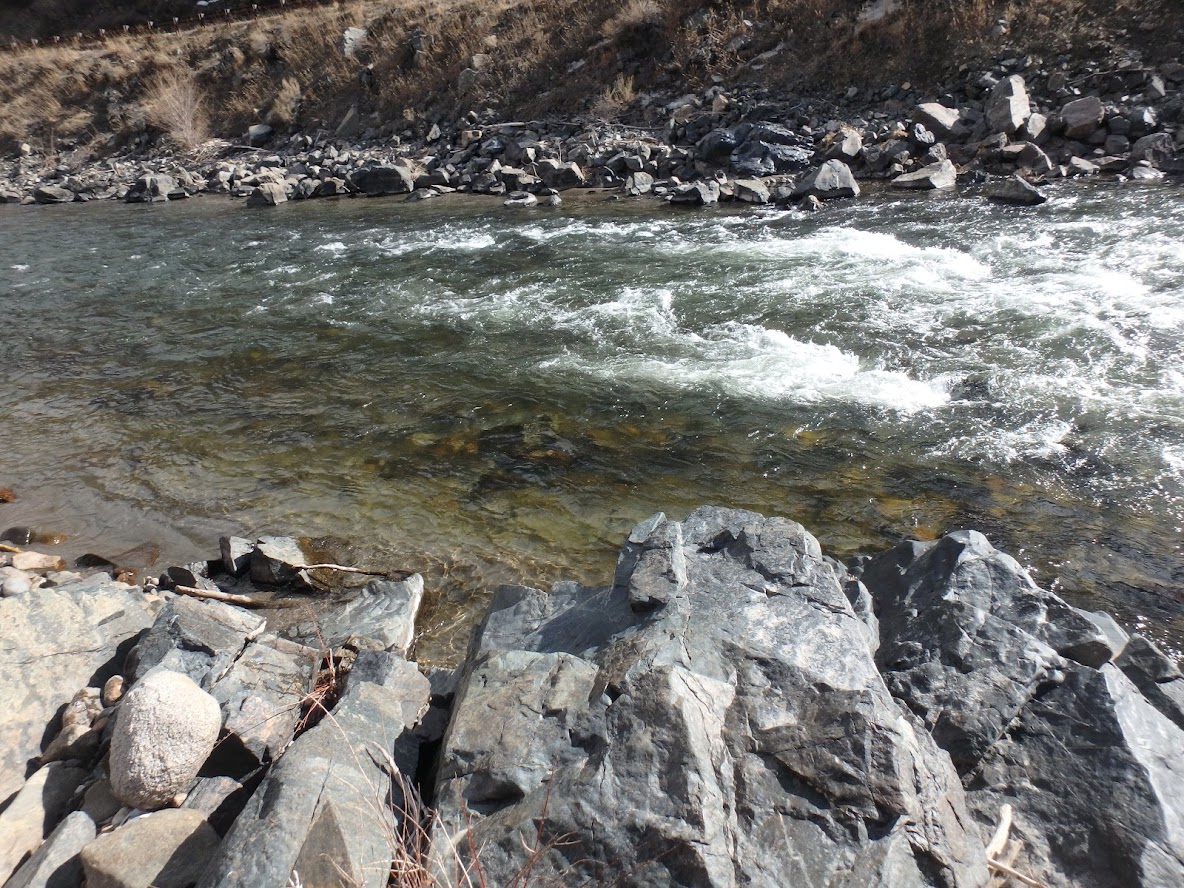 Five fish in four hours represents a below average catch rate, but all the landed trout were in the twelve to thirteen inch size range, and I was pleased with the diversity of three browns and two bows. I nearly had the large river to myself, and other than the wind, the weather was quite pleasant for March 11. I drove six hours for four hours of fishing, but Wednesday was a success in the eyes of this avid fisherman.