Arapahoe Basin touts itself as the legend. I’m not sure it’s a legend, but it surely has an aura and feel of ruggedness that hard core outdoor enthusiasts appreciate. A-Basin is certainly not attempting to appeal to the cushy tourist crowd that the large ski areas compete to attract. Nestled in a high country basin three-fourths of the way up Loveland Pass, A-Basin’s high elevation bowls showcase steep terrain and numerous cornices for the fearless leaping skiers. There is an intimacy about this place that harkens back to small family-owned ski areas that flourshed before the ski industry went corporate. The free “beach” parking, the rustic base lodge, and the reasonable food prices are extras that increase my enjoyment of a day of skiing at the legend. 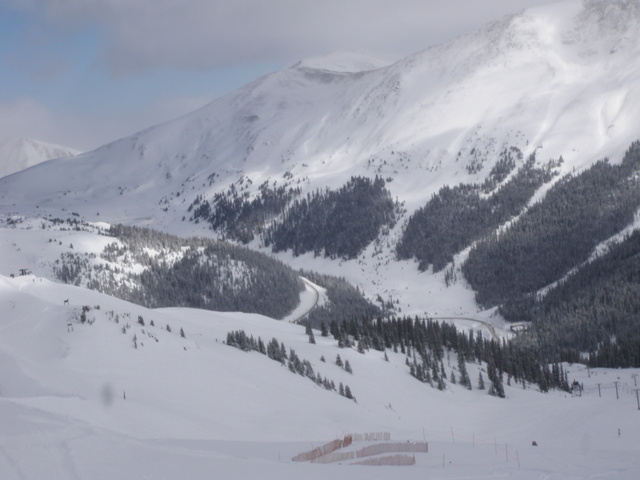 I contacted my regular ski buddies to see if anyone was available for a day in the high country on Wednesday, March 5. The only available taker was Fred Young, so I agreed to stop at his mountain house near Dillon by 8AM, and we tentatively planned to go to Breckenridge from there. Unfortunately Denver received three or four inches of snow Tuesday night into Wednesday morning, so the drive was a challenge, particularly the stretch from western Denver to Idaho Springs and then from Silver Plume to Silverthorne. Fred was waiting in his garage when I arrived ten minutes late due to the slow going, and we quickly assessed the options and decided to change our destination to Arapahoe Basin.

I had not yet skied at A-Basin in 2014, so I was open to making it my ski playground for the day, and Fred stated that Breckenridge and A-Basin both received approximately three inches of new snow. Fred’s wife Douggie had ski lessons at A-Basin on her schedule, but we departed ahead of her in my SUV to obtain prime beach parking next to the slopes. It worked out, and I backed into a nice spot seven spaces west of the picnic tables by 8:25. We prepared to ski, but neither the Mountain Express nor the Pallavicini lifts were showing any signs of movement. Eventually Fred asked a lift operator at the short beginner chair across from us and learned that the main lifts didn’t open until 9AM on weekdays. 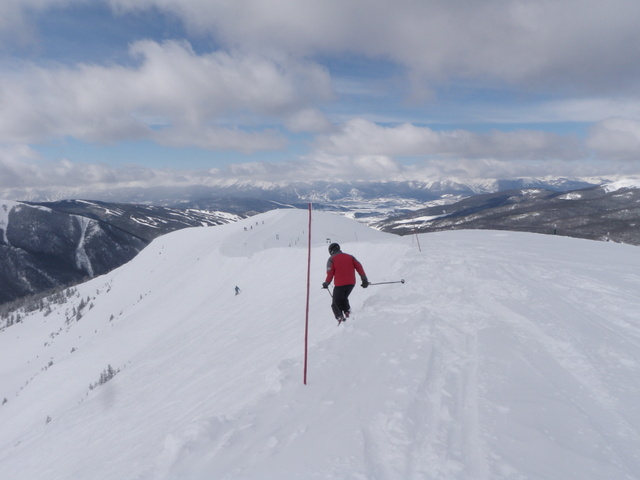 A large gray cloud hovered over the mountain as we finally boarded the Pallavicini lift and made the quick ride to the top. The cloud cover remained and compromised the lighting for most of the morning, however, we still managed to ski International, Radical, Standard, and Slalom Slopes. These were all moguled black diamonds, and the fresh snow combined with poor lighting made recognizing the variations in terrain very difficult.

Finally by 11AM some periods of sun broke through so Fred and I did a couple double black diamond runs on Montezuma Bowl. These were a blast as we accepted the challege of dropping off the ten foot high cornice and then jump turning our way down the steep face. We returned to the front side for a maiden run down the skier right side of Pallavicini and ended our morning with a couple runs off the Lenawee lift and then retreated to the base lodge for lunch by 11:30 or 12:00.

After lunch we attacked Pallavicini for a second time although we stayed to the left of Spine, the higher backbone that runs down the center. Next we dazzled the ski lift riders on International and then ended our day with a sprint down West Wall and then took the Lenawee chair to the summit to position ourselves for a traverse and descent of East Wall. 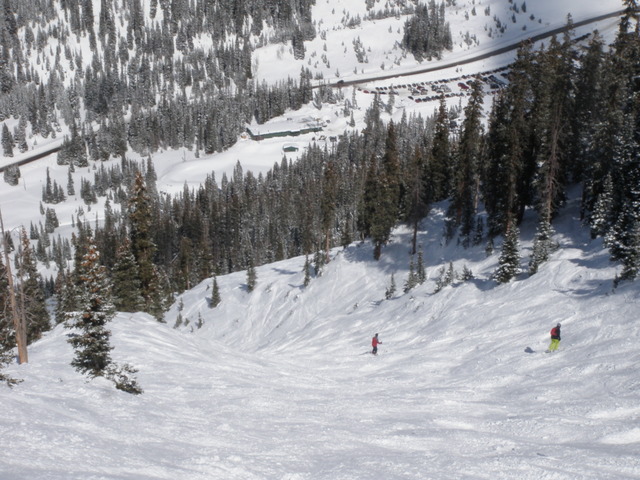 Fred Below in Pallavicini Chute

It was a fun day of skiing nearly 100% black diamond terrain, and I was both exhilierated and exhausted by 2:30 when we called it a day. We met Douggie, and she agreed to accept her husband as a passenger, so we transferred Fred’s gear, and then I made my return trip to Denver over Loveland Pass

I’ve always been an admirer of simple elegance, and A-Basin certainly fits that description. Pure and simple beauty and elegance combine with rugged above-timberline terrain to create a legend.