My post of 1/29/2020 does an excellent job of updating on my favorite applications of the gray stimulator. It also describes some of the pitfalls to avoid while tying stimulators, and a review of Charlie Craven’s video on www.charliesflybox.com will ensure that any tier avoids these missteps. 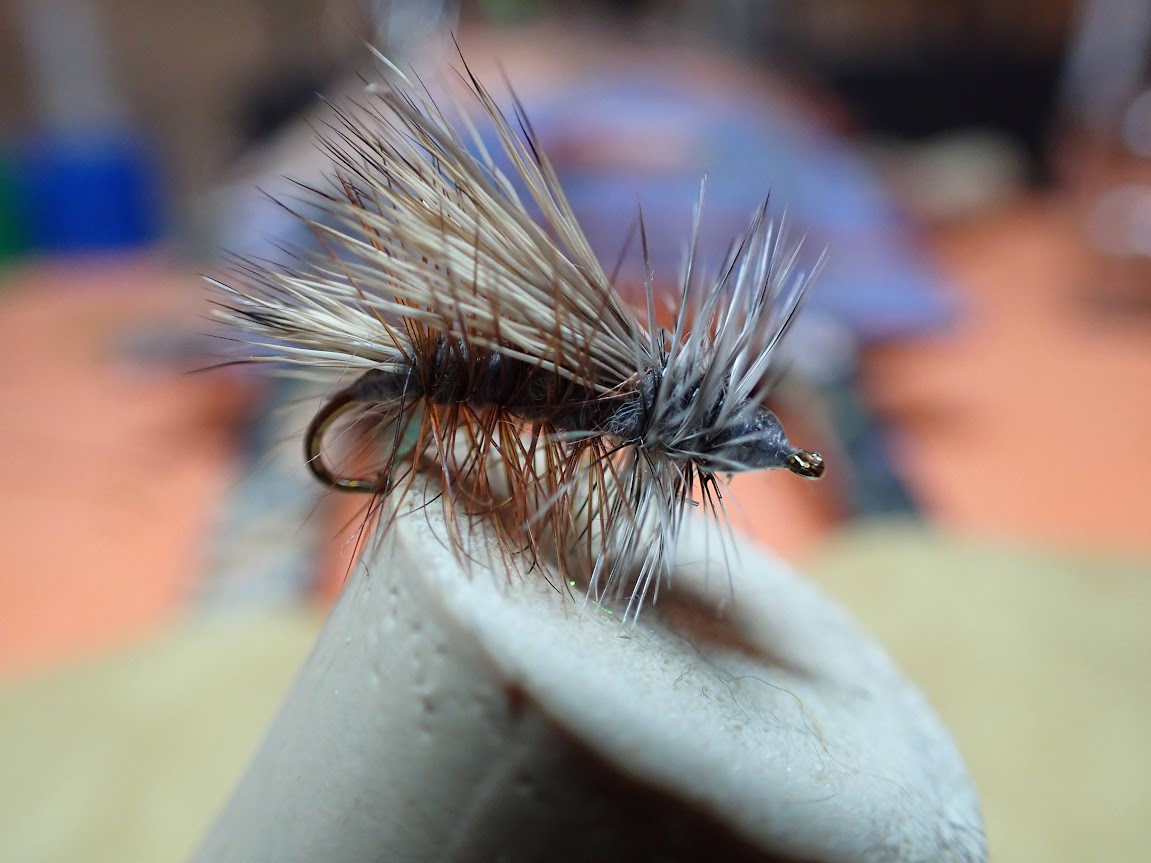 Stimulators comprised a large proportion of the flies in the fly box that I lost last September, so I turned to the vise and cranked out six additional size 14’s. Gray is a favorite all around body color for me, as it seems to work well across a broad spectrum of natural body hues of stoneflies and caddis. I produced six additional heavily hackled flies for the upcoming season. 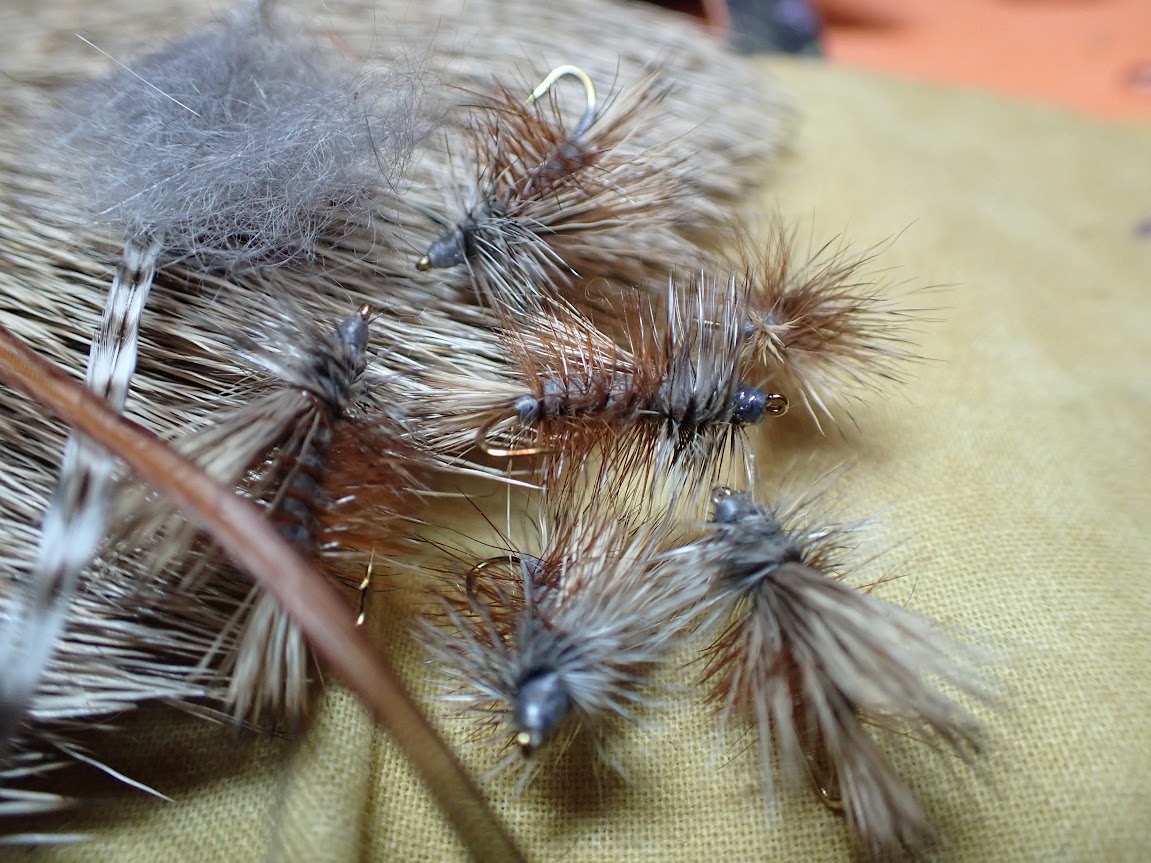 If you click on my 02/21/2017 post on the yellow stimulator, you can read an interesting narrative about some of my early success with this fly. My devotion to this fly endures six years later, and I examined my supply and churned out another batch of four to increase my inventory to adequate levels. 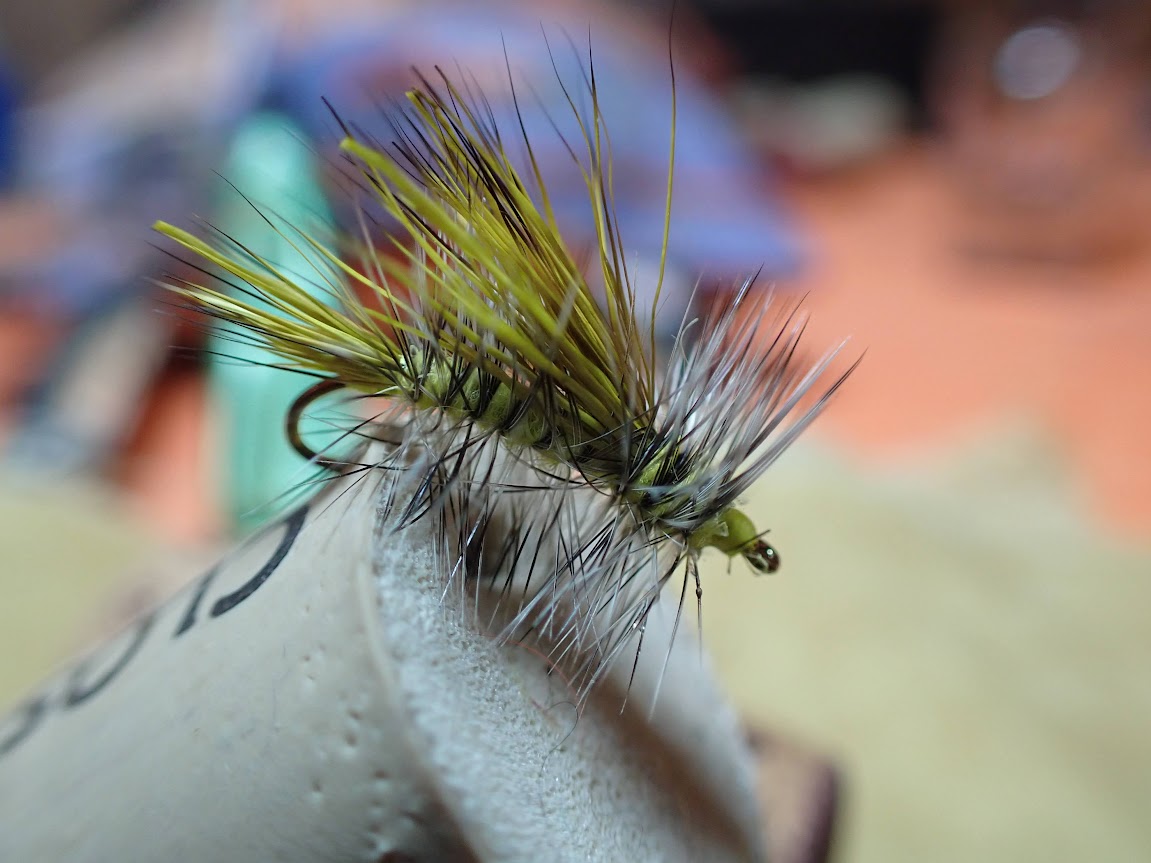 The yellow stimulator in sizes 14 and 12 are especially effective during yellow sally and golden stonefly emergences, and these tend to peak in the late June until mid-July time period; however, I often knot one of these bushy imitations to my line outside the prime yellow stonefly time period. Guess what? They work throughout the season. 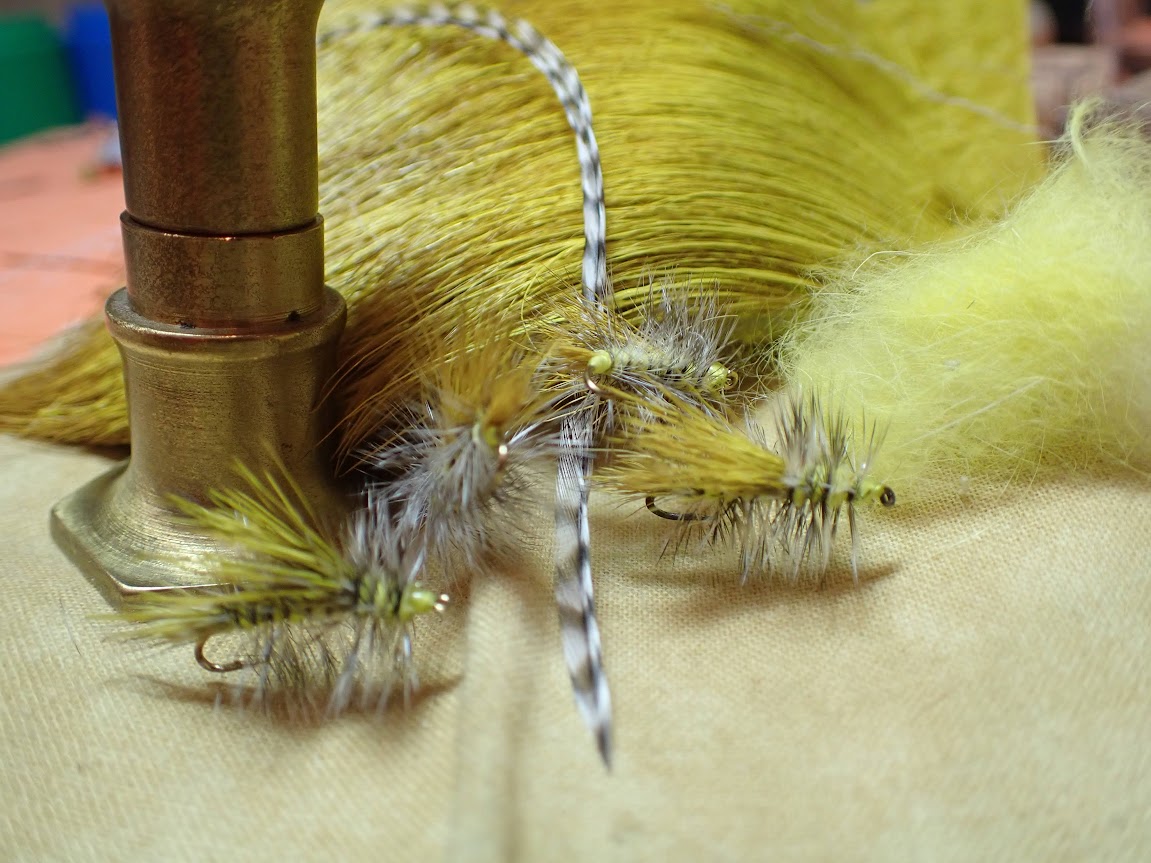 Stimulators are not exceedingly difficult to tie, but some precision at several key points can improve the output significantly. No tier is more precise in their instruction than Charlie Craven, so I usually review is tying video, before I dive into stimulator production. His method follows the classic approach including using fine wire to bind down the palmered hackle. I personally do not like applying wire to a dry fly, so I skip that step and tie in a saddle hackle in front of the tail and wind forward. Otherwise, i follow his steps without deviation.

Background information and a materials table may be found in the following two posts: 03/06/2021 and 02/23/2020. I lost my fly box during 2021, and this put a dent in my supply of Klinkhammer BWO’s, so I devoted some hours to replenishing my supply with six additional versions. 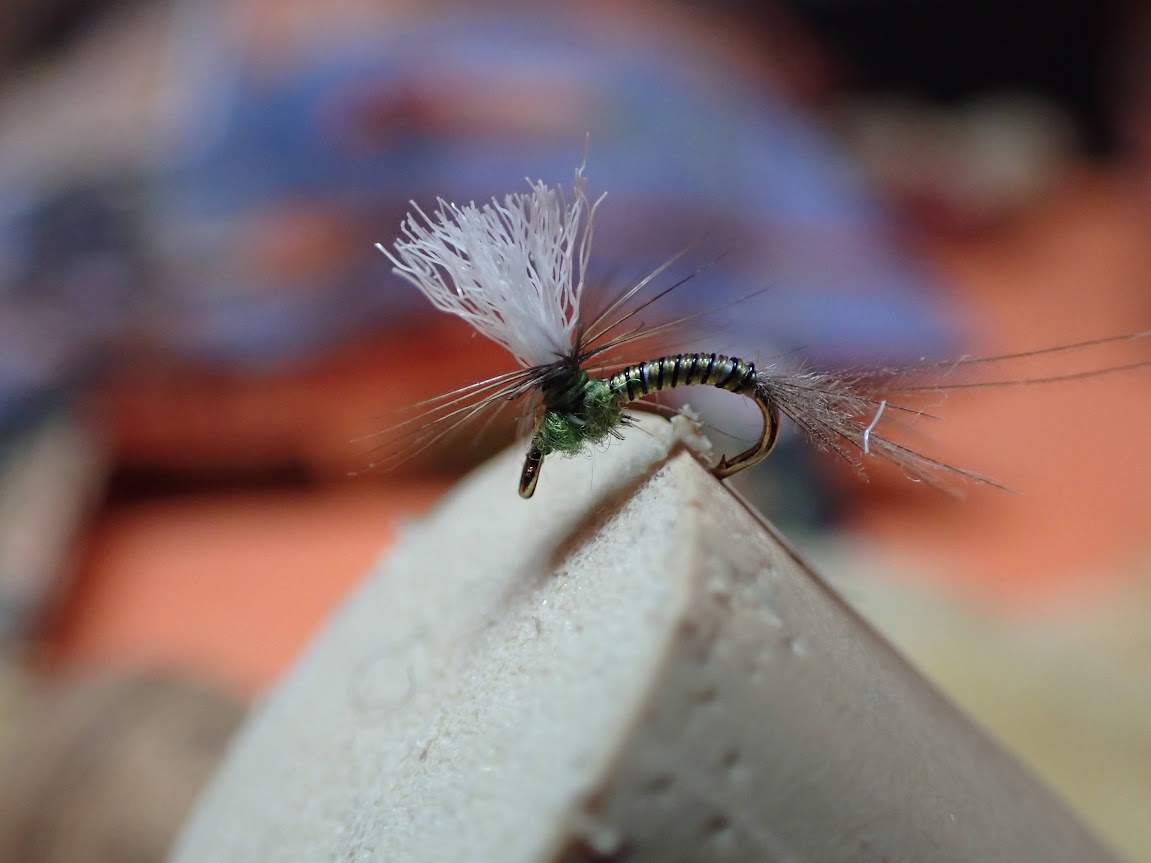 My primary BWO imitation is the CDC BWO, but on occasions where the trout ignore the CDC style, I resort to Klinkhammer BWO’s. Sometimes it produces, but at other times it is also avoided. I concluded that the tough blue winged olive days occur when the wind is strong, and the adult mayflies bounce and skip on the surface of the river. It is very difficult to imitate the erratic movement with a fly, but I have on occasion prompted a response with a quick twitch or lift in front of a sighted trout. Even after forty years of fly fishing, I continue to experiment and learn new tricks. 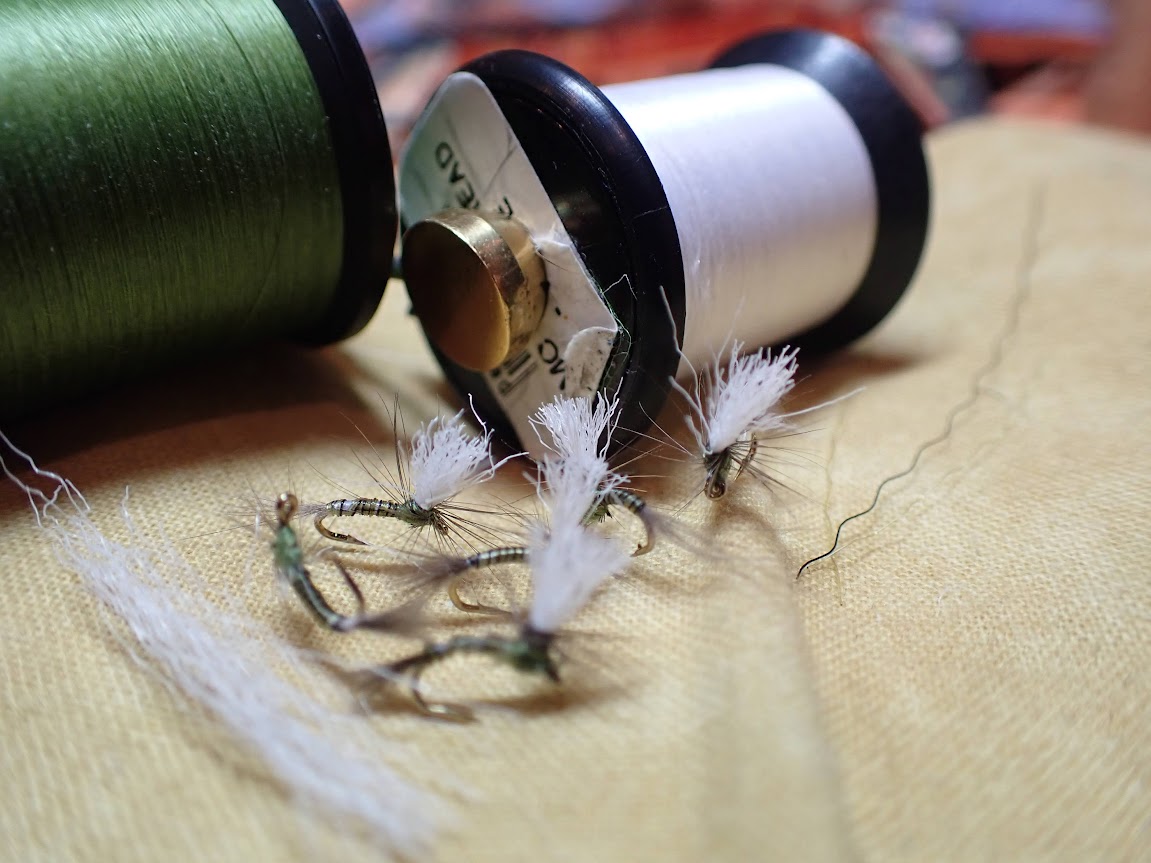 My post of 02/21/2019 covers much of the basics of this fly. This small baetis imitation continues to be my most productive fly for fooling trout during the spring and fall blue winged olive hatches. The comparadun style allows it to ride low in the water column; and, thus, it imitates adults and emergers. During very windy days; however, it often loses its effectiveness, and for this reason I also stock a supply of Klinkhammer emergers and soft hackle emergers. I theorize that the trout pick off emergers below the surface because the adults get swept away by the wind in rapid fashion. 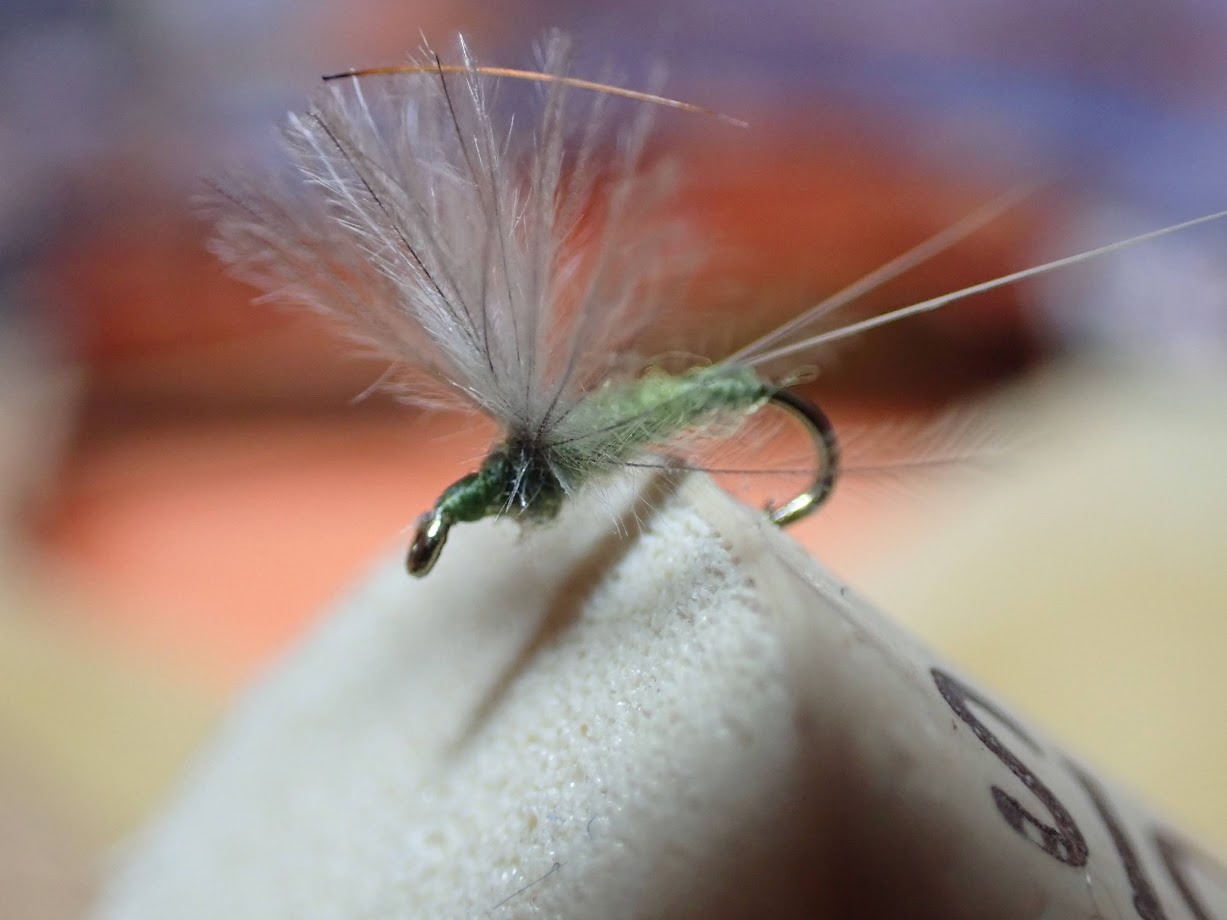 Last year, however, I formed a new theory on this windy day conundrum. During wind gusts the adults skitter across the surface, and my observation suggests that perhaps the trout look for small insects with a lot of movement. For this reason I may tie up a few fully hackled blue winged olives to create the illusion of tumbling wind-blown food morsels. 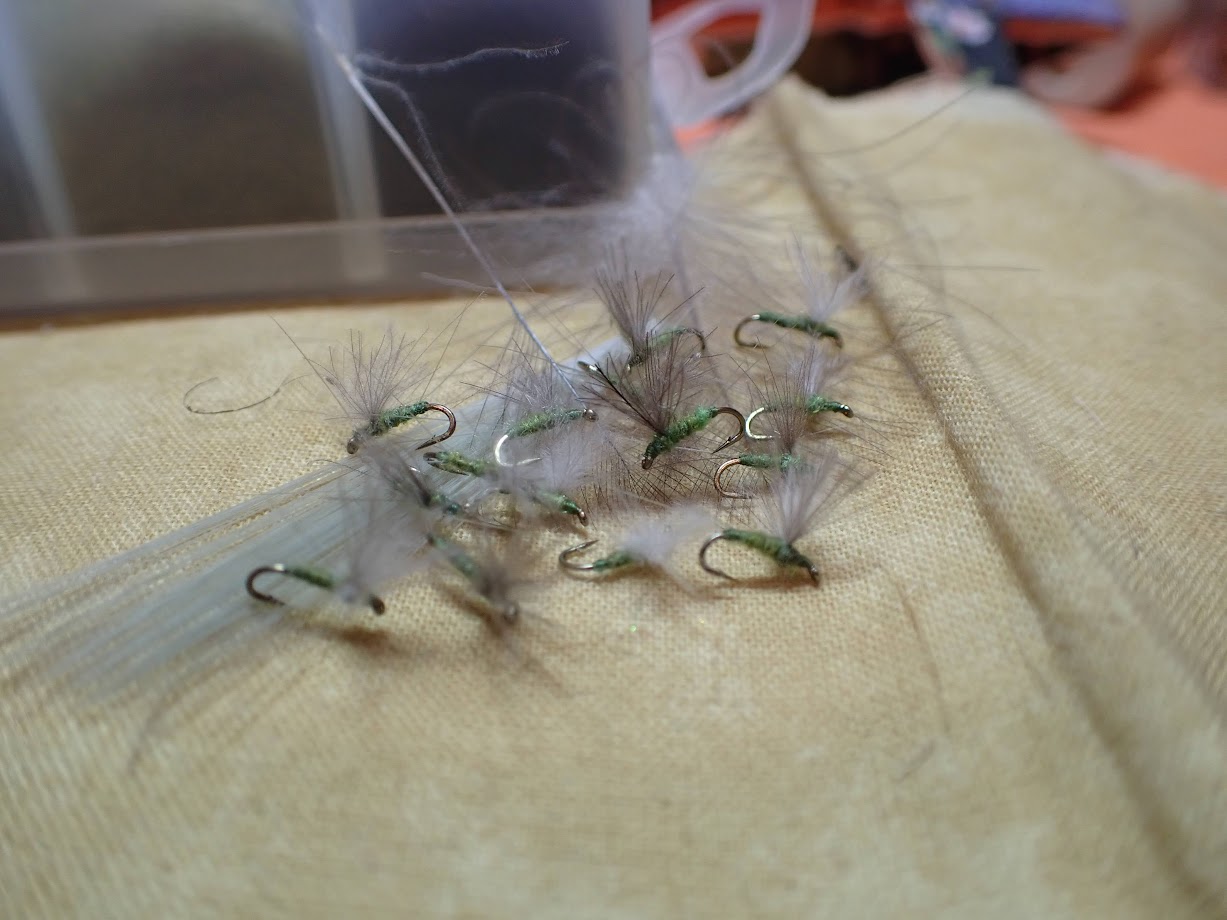 When I counted my supply of size 22 CDC BWO’s, I discovered that I was a bit low, so I churned out fifteen additional copies. These should keep me in adequate supply over the coming season. In addition I produced five new size 24 CDC BWO’s in case some of my lack of success during hatches results from the presence of very small mayflies.

Just what the world needs, another large foam dry fly. That is an apt description for the increasingly popular chubby Chernobyl. My post of 02/08/2022 provides ample links to all things chubby, and I recommend that you inspect it, if you are intrigued by this awkward looking fly. 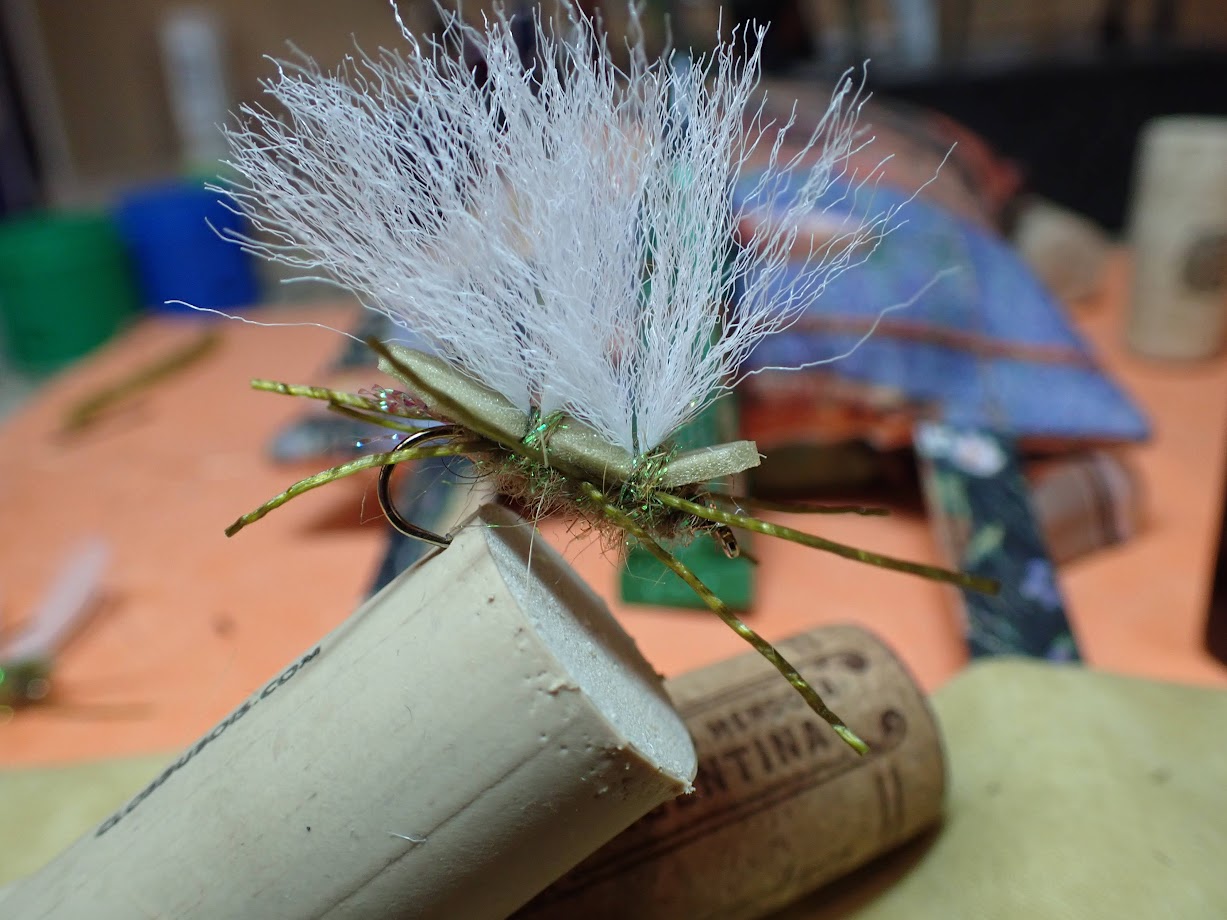 The chubby Chernboyl looks like a classic Chernobyl ant when viewed from below; however, the angler’s view is an image of a large clump of white poly yarn. Initially when I used this fly I was turned off by the tendency of the poly to get saturated with water, but after observing some guides, as they applied fly floatant to the wing, I found the solution to my limp wing misgivings. 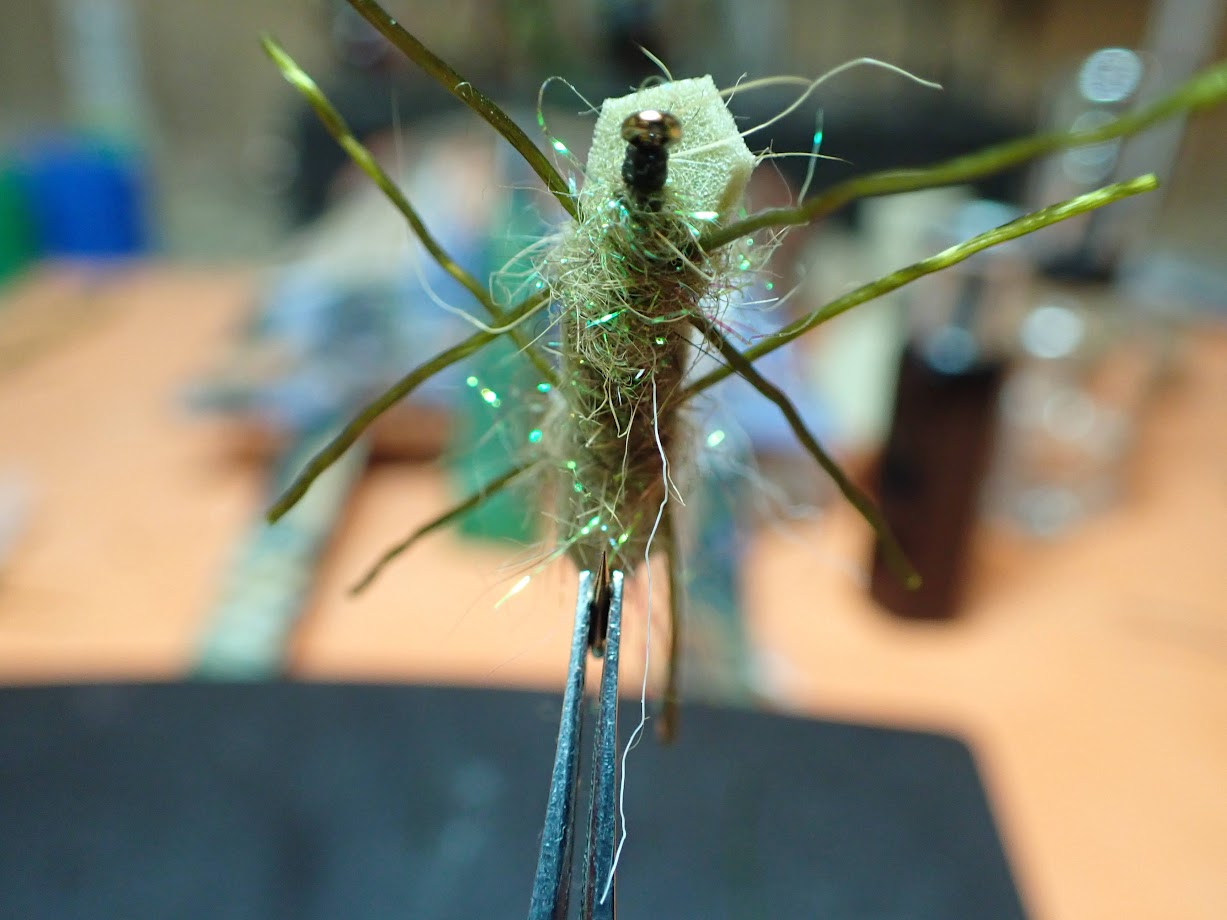 Over the past two seasons I placed a chubby on my line more frequently than a fat Albert, and I have experienced some success with it. My confidence began during several trips to the Yampa River in a previous June, when large fish crushed the gangly imitation bearing an ice dub tan body. Of course this was a development that I could not ignore, so I tied a batch. 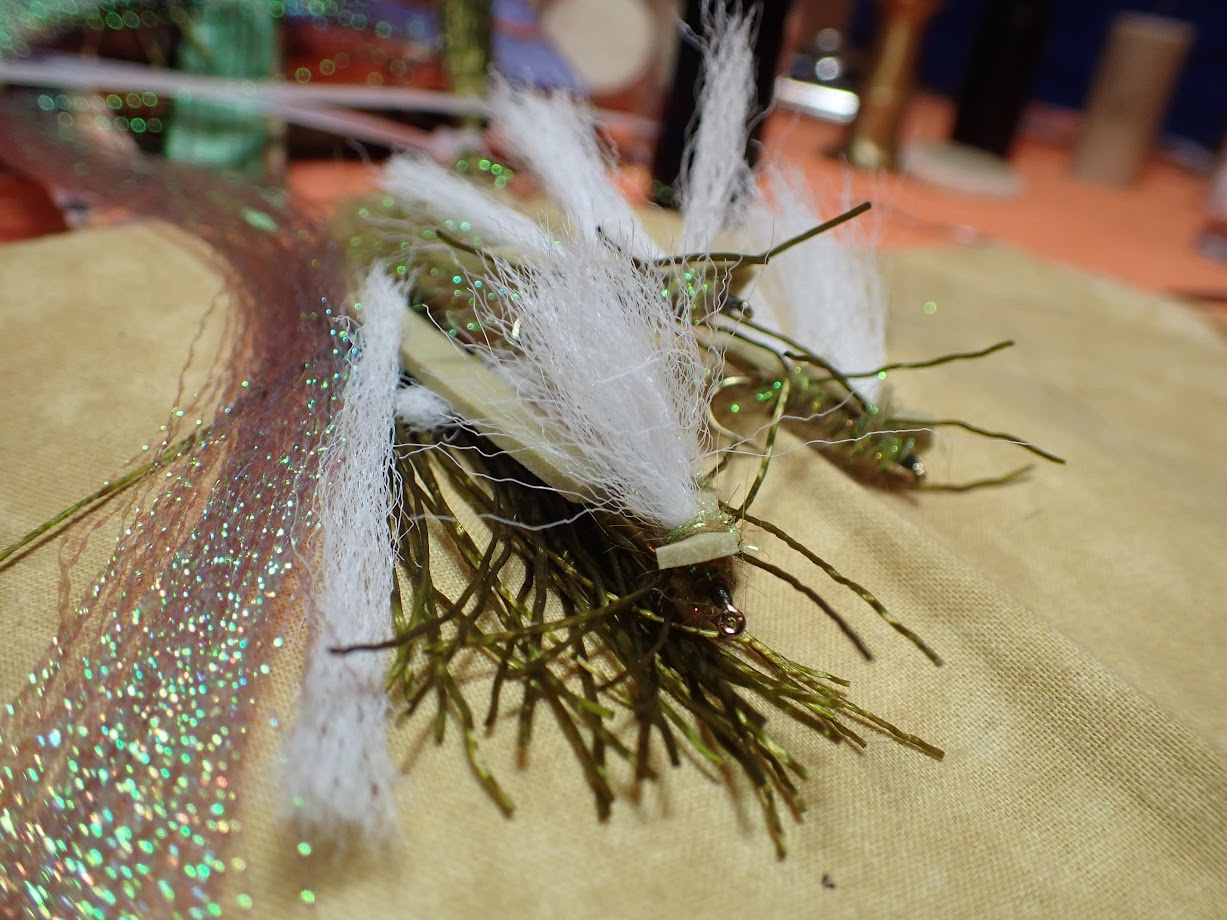 I counted my supply of these monsters, and I realized that I had adequate quantities of the large attractors with yellow, gray, and green bodies; but I did approach my vise to manufacture three additional versions with ice dub tan bodies. Hopefully these flies will attract hungry trout during 2022.

Once again during the 2021 season a guide exposed me to the effectiveness of the purple haze. I floated the Rio Grande in the vicinity of Creede, CO for three days in late June, and the purple haze proved to be exceptionally productive on one of those days. To read more about my initial introduction to this interesting dry fly, check out my post of 02/15/2021. This post contains a materials table and some success stories from the summer of 2020. 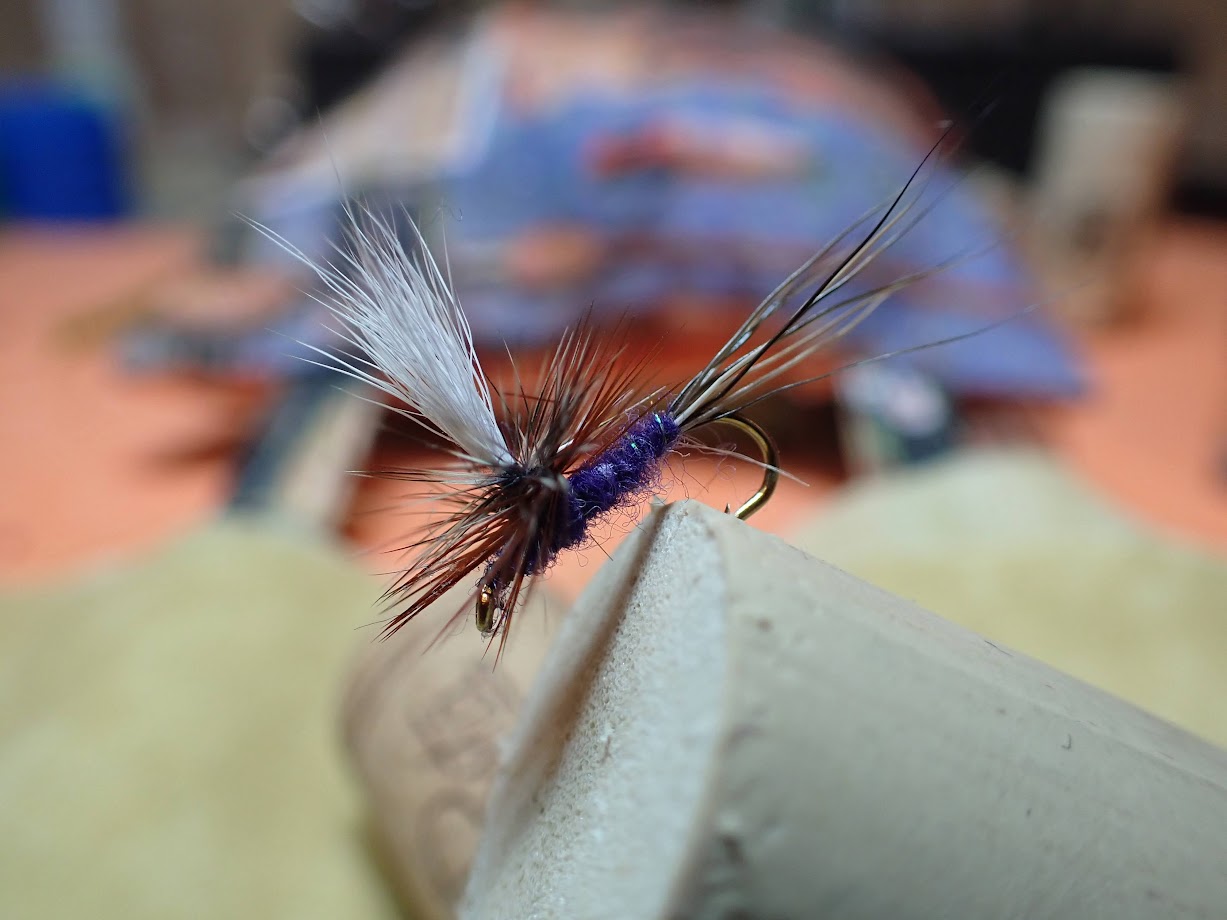 Aside from my guides’ knotting the purple haze to my line, I actually chose it myself on a few occasions, and it accounted for several fish. I was impressed enough to approach my vise to create five additional models for the upcoming season. The official instructions from the creator of the fly call for using a purple floss style thread for the body; however, I deviated from the recommendation and utilized purple dubbing. I suspect the trout will not care. Will 2022 be the year when the purple haze becomes a mainstay in my dry fly attractor box. Stay tuned. 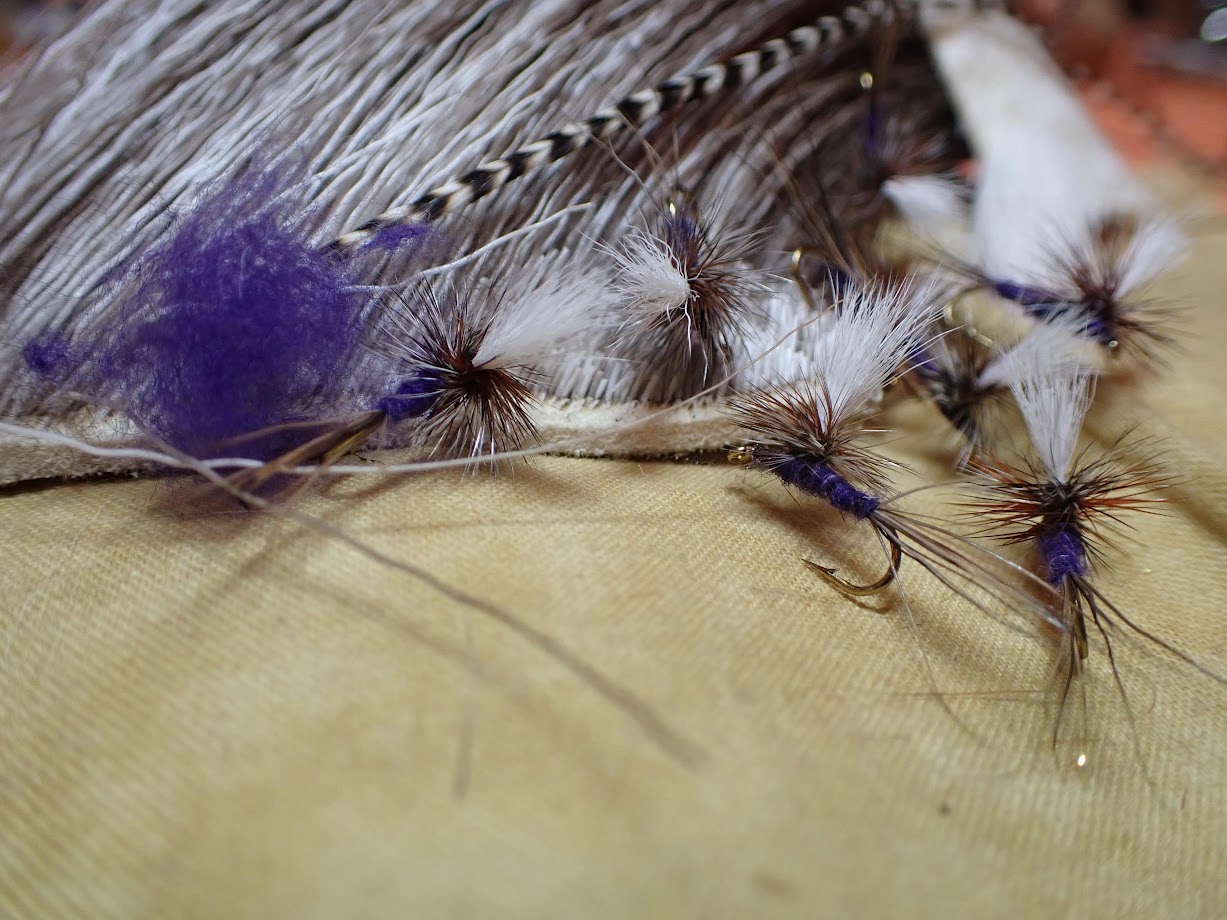 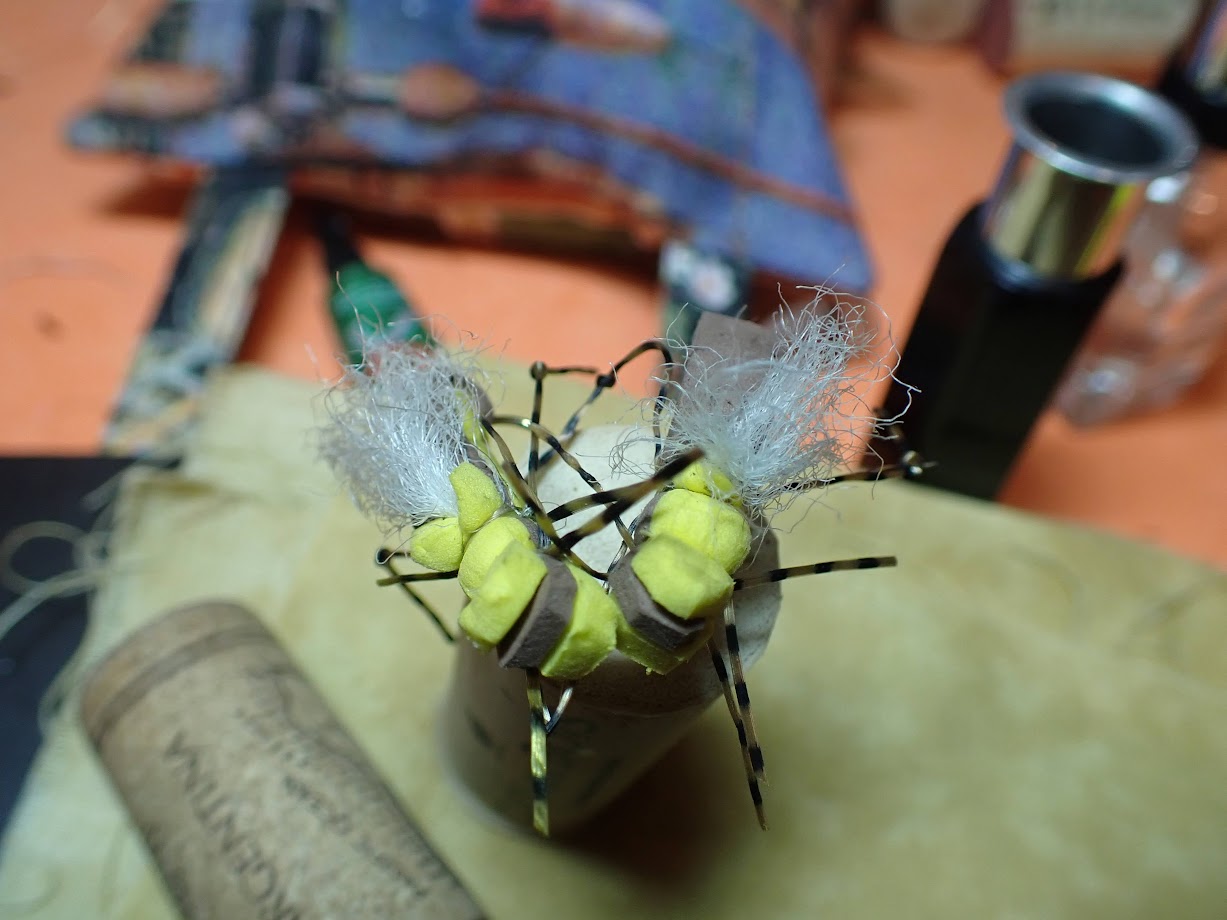 My post of 02/04/2021 provides the key links to a materials table and anecdotes regarding my usage and introduction to the fat Albert. I tend to use this fly as an indicator in the early season prior to run off, and I also default to it quite often during the edge fishing time frame, when the rivers are blasting downstream at a rapid pace and leaving only the ten feet along the bank as a target area for casting. The large foam body is highly visible and very buoyant, and these attributes are conducive to its role as an indicator fly. 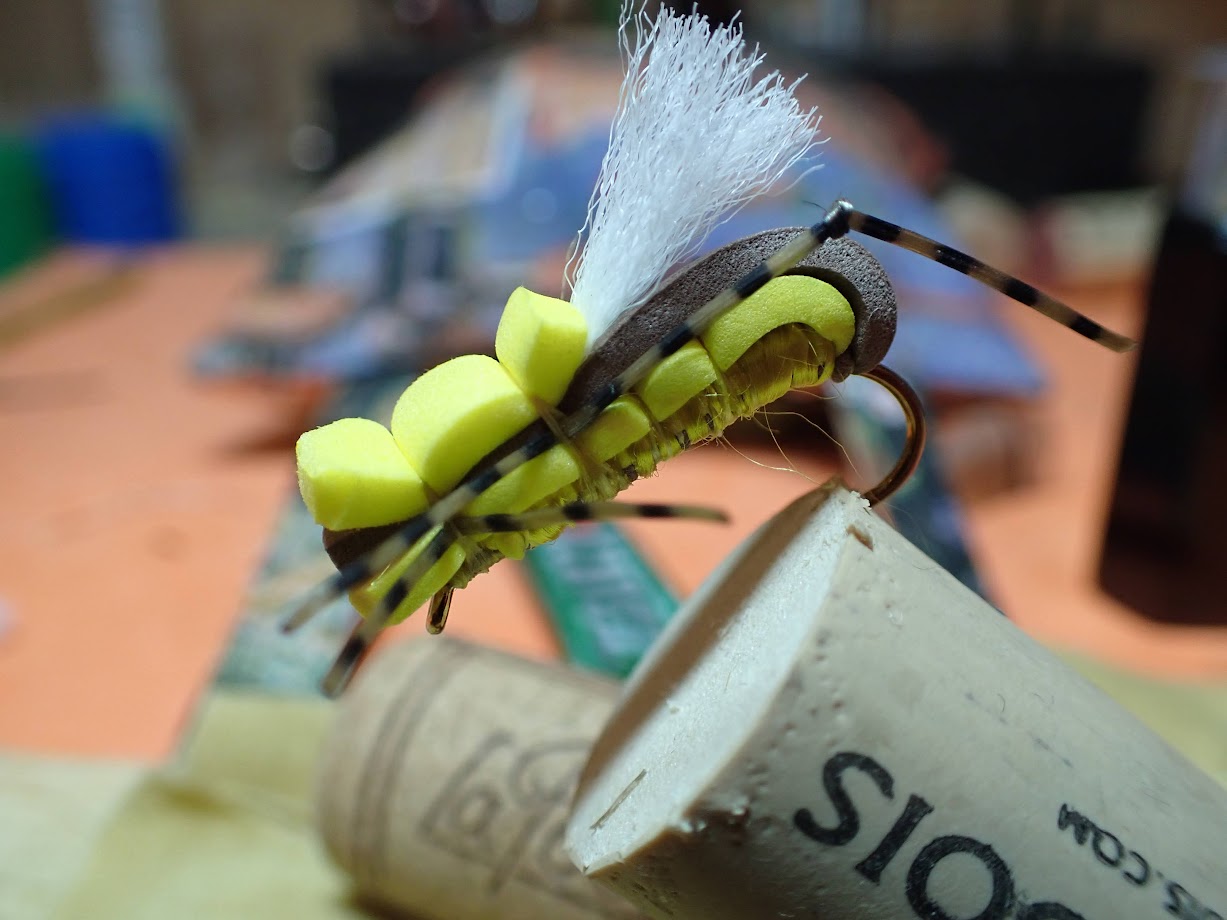 I tie mine primarily with a yellow underbody beneath a layer of yellow foam, and I am convinced that the fly gets consumed as a golden stonefly adult in addition to a hopper with a yellow body. This may explain its productivity during the early season and during late June and early July, as these time frames coincide with golden stonefly activity. 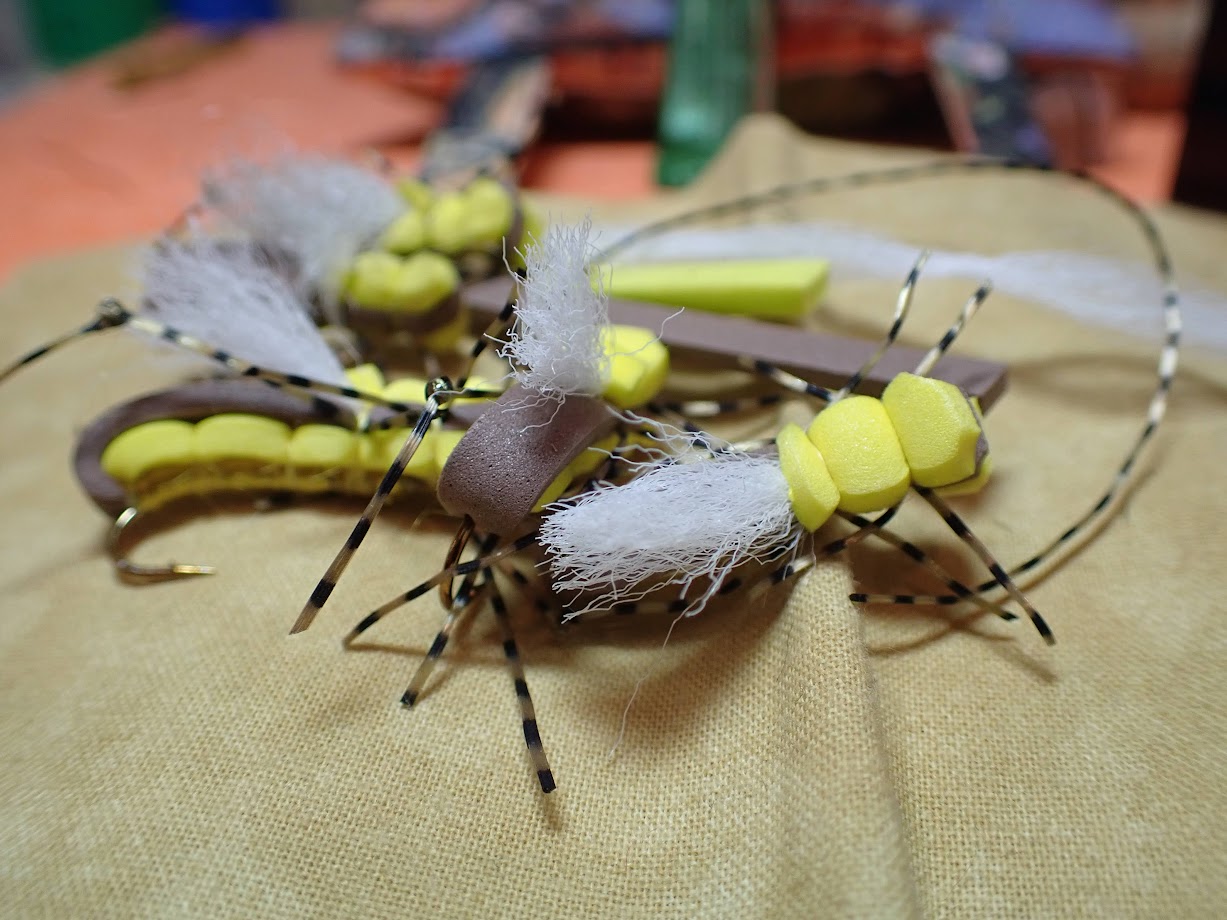 For 2022 I refurbished two with missing legs and made an additional three from scratch to up my fat Albert inventory to a sufficient level for the upcoming season.

The pool toy hopper is another Andrew Grillos creation that I have grown to love. This is my favorite grasshopper imitation and a frequent occupant of the surface position on a dry/dropper configuration. I also tie fat Alberts, Charlie boy hoppers, and hopper Juans, but the pool toy is consistently my top producer. The fat Albert spends a lot of time on my line, because it is even more visible than the pool toy, but during hopper season the pool toy outperforms the fat Albert in terms of eats on on the surface. 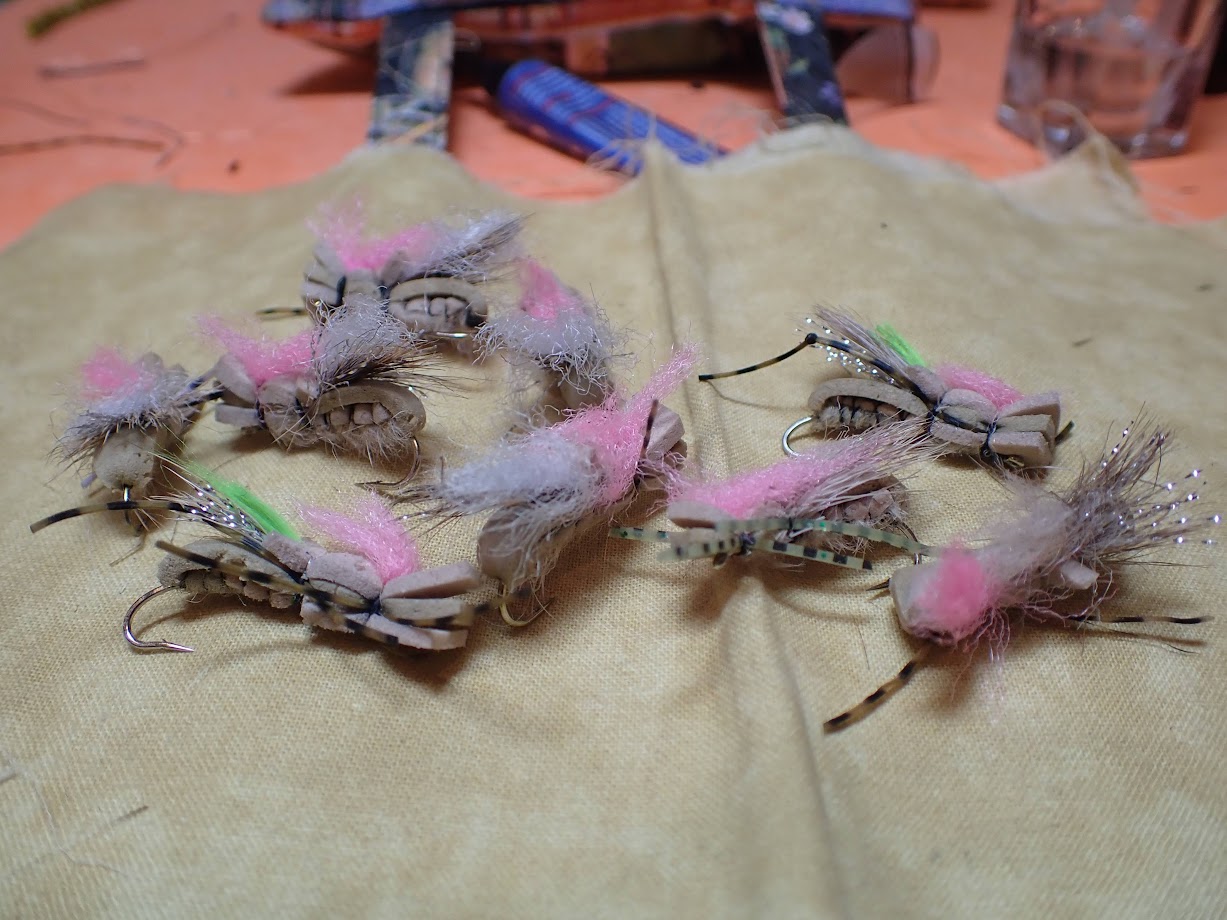 My post of 01/31/2021 provides a comprehensive update on all things related to the pool toy hopper with links to a materials table and directions to a source for tying instructions. 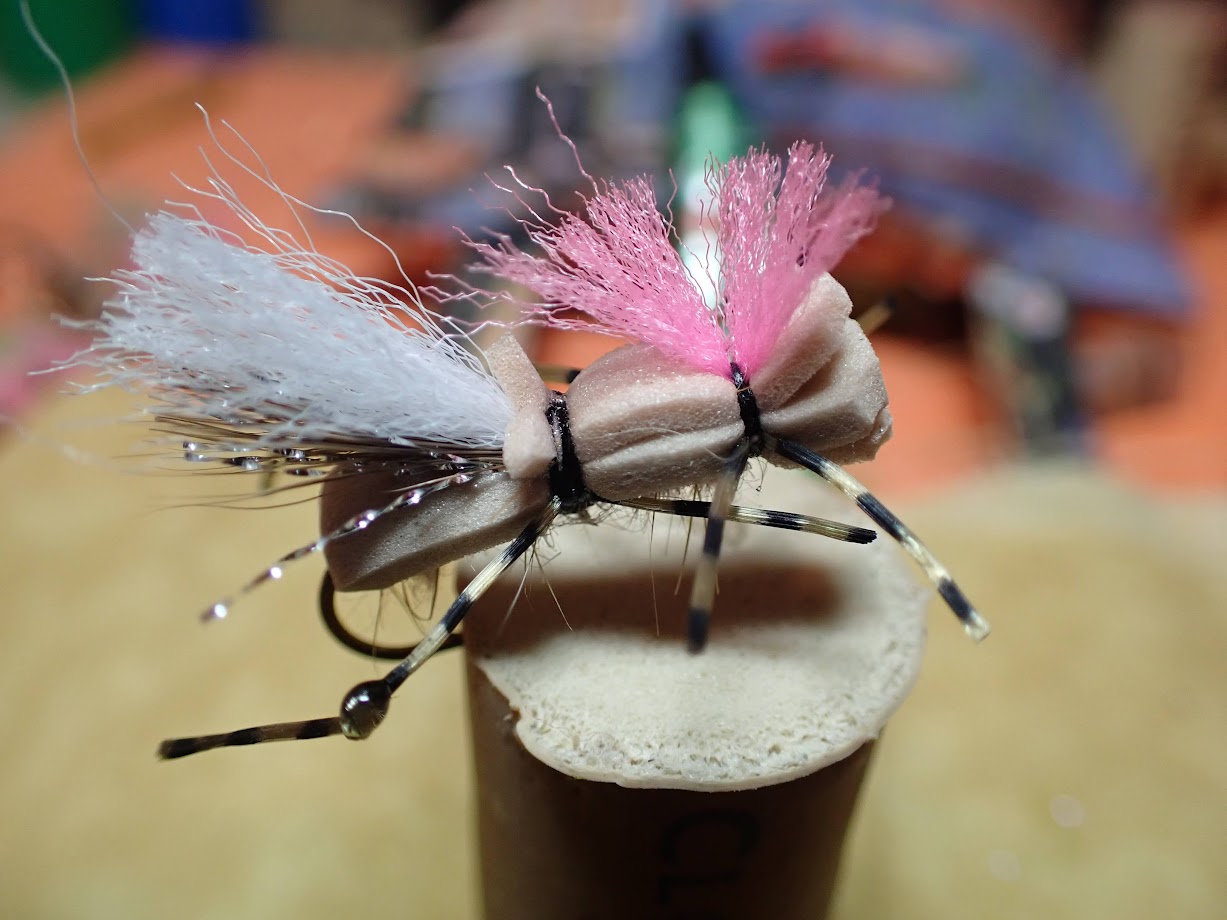 I inspected the canister that I maintain with damaged and unraveling flies, and I discovered nine pool toy hoppers. This is an indication of my frequent reliance on this productive fly. These flies were missing front and back legs, and I was able to refurbish them without stripping them down to the bare hook. In addition to nine repaired flies, I made three new ones. I have reduced my tying of pool toys to tan bodies with tan underwings in size 8. Bring on the hopper hatch in 2022. 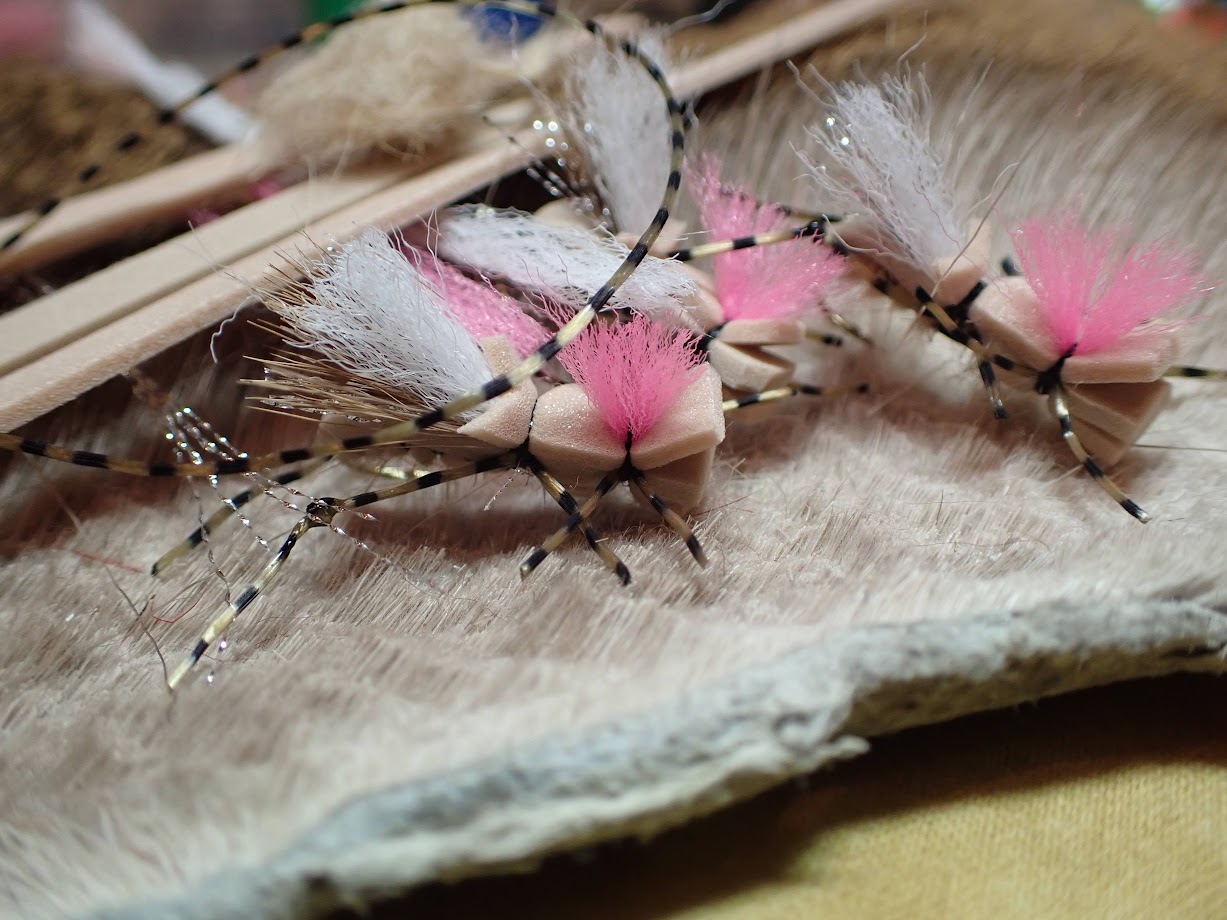 In spite of the surge in popularity of the chubby Chernobyl, I continue to value and stock the classic Chernobyl ant. I have very little to add to my writings of 01/23/2021, so I refer you to that comprehensive report. 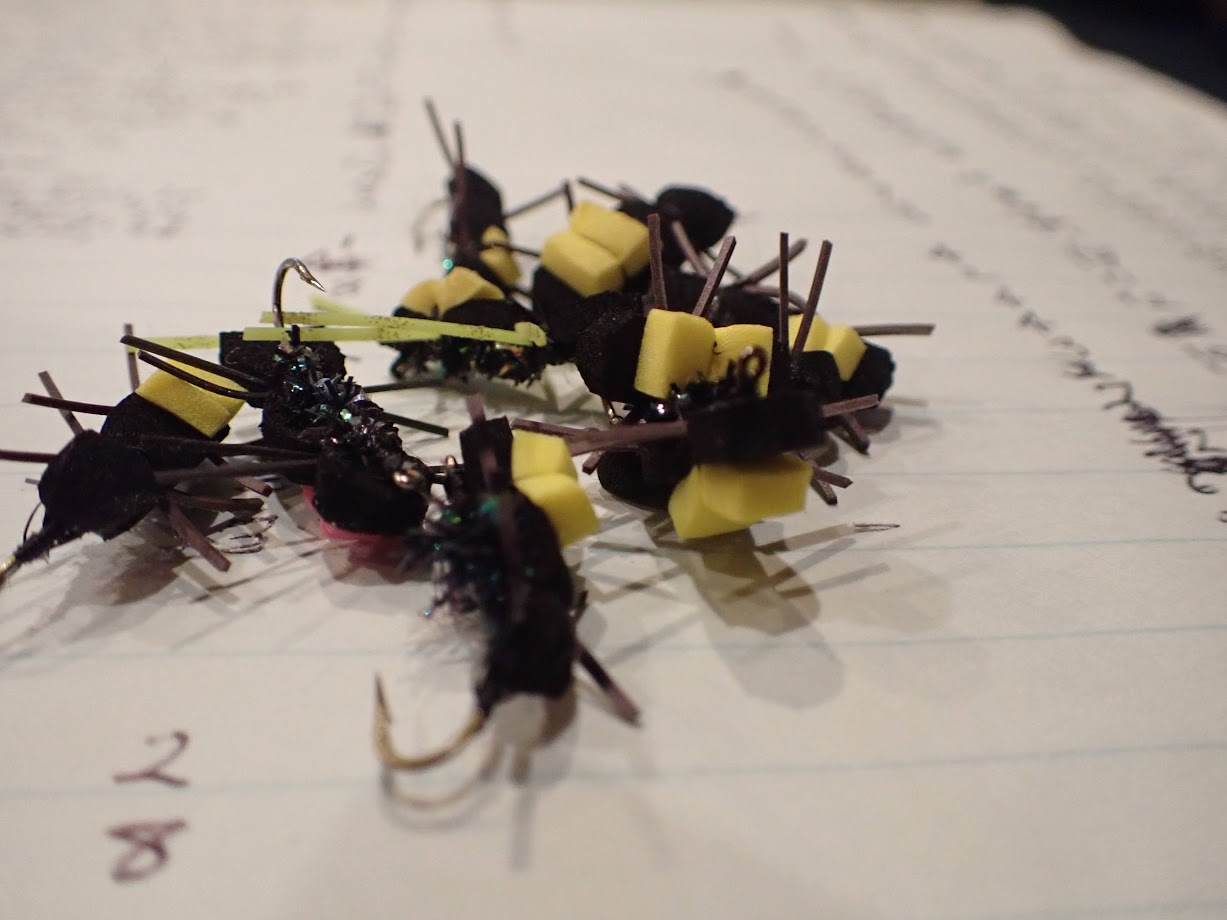 As was the case then, I counted my supply and determined that I possess more than adequate quantities of size 8 and 10 Chernobyl ants. I passed on tying more and moved on to the next foam attractor on my list.