I encourage the followers of this blog to check out my post, Comparaduns – 02/21/2014, for an interesting description of my introduction to comparaduns and some excellent pointers on how to tie an attractive mayfly imitation without hackle. The comparadun style continues to excel during mayfly hatches in the west. 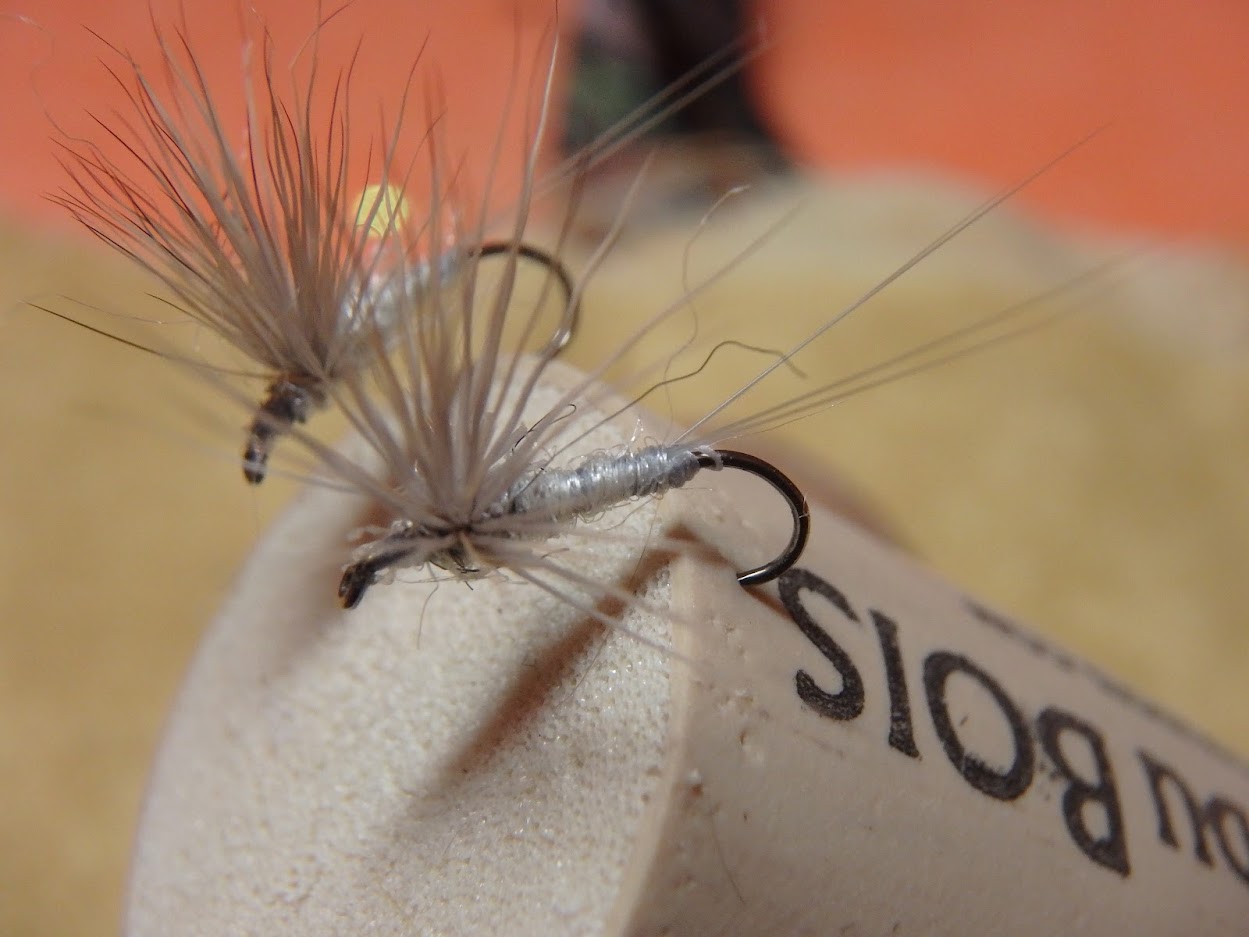 Comparaduns effectively imitate pale morning duns, western green drakes, and blue winged olives in the west along with a myriad of mayfly hatches in the east. I fish primarily in the west, so my focus is on the big three listed at the beginning of the above sentence. For small blue winged olives I substitute CDC for deer hair for the wing, as it compresses more and does not contribute the bulk that accompanies deer hair. 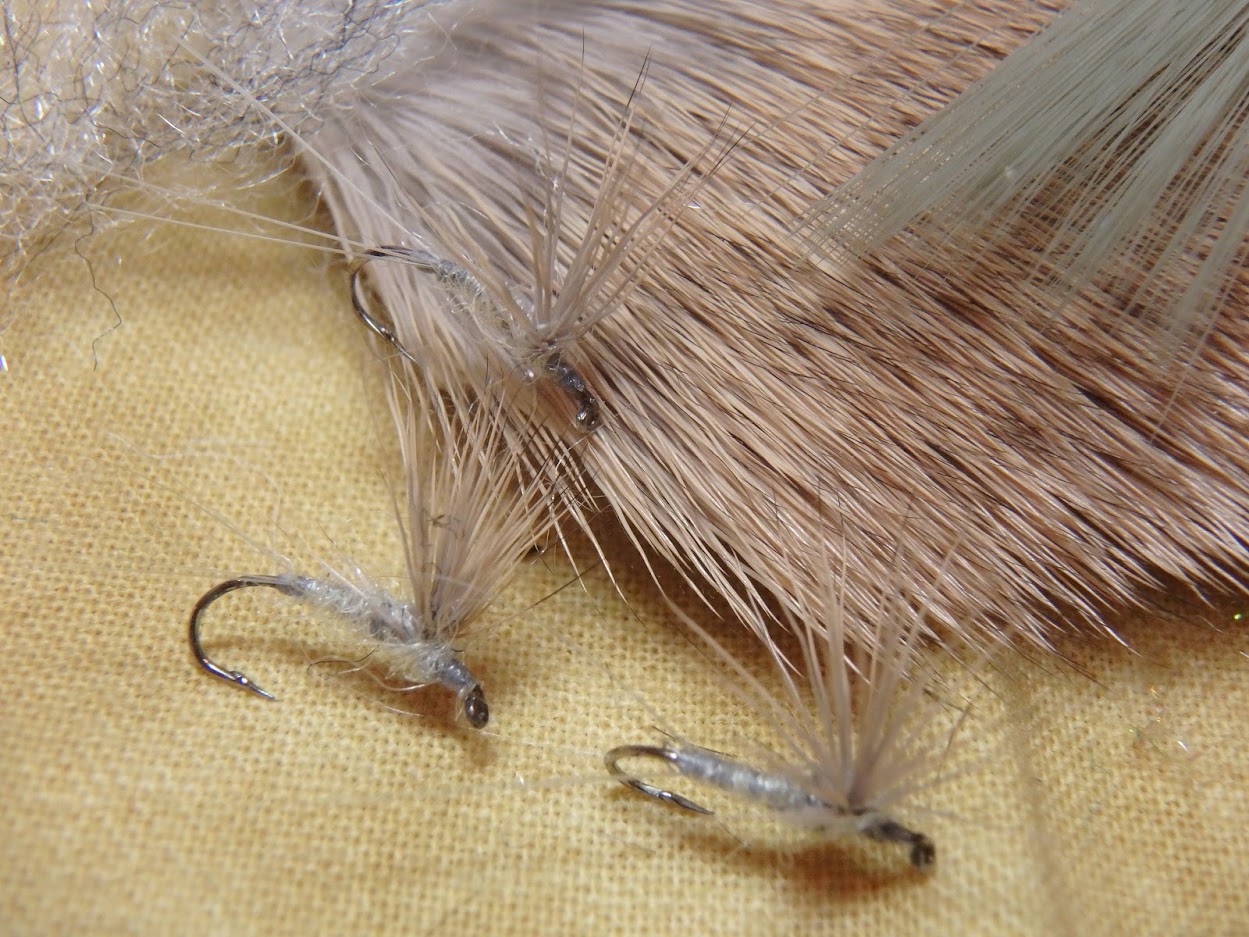 As is my custom, I counted my supplies of light gray comparaduns in sizes 18 through 14, and I determined that I possessed adequate quantities of each. Having assured myself of the necessary inventory of light gray, I sorted through my damaged fly canisters, and I found three in need of rehabilitation. All of them were missing tails, so I stripped them and tied three new models. Rarely does a season pass when I do not deploy light gray comparaduns, and they typically yield favorable results. I expect 2019 to be no different.

I have very little to add to the subject of cinnamon comparaduns, that I did not already communicate in my posts of 02/01/2015 and 12/23/2015. I particularly like the 12/23/2015 post, as it offers several detailed fly tying tips that enable a fly tier to produce very attractive comparadun dry flies. I continue to favor comparaduns as my “go to” mayfly imitation, as they ride low in the film and produce a very lifelike delicate silhouette that consistently fools trout. A side benefit is the avoidance of buying expensive dry fly hackles. The 02/01/2015 is interesting as well, as it narrates the story of my introduction to the cinnamon comparadun as a pale morning dun imitation. 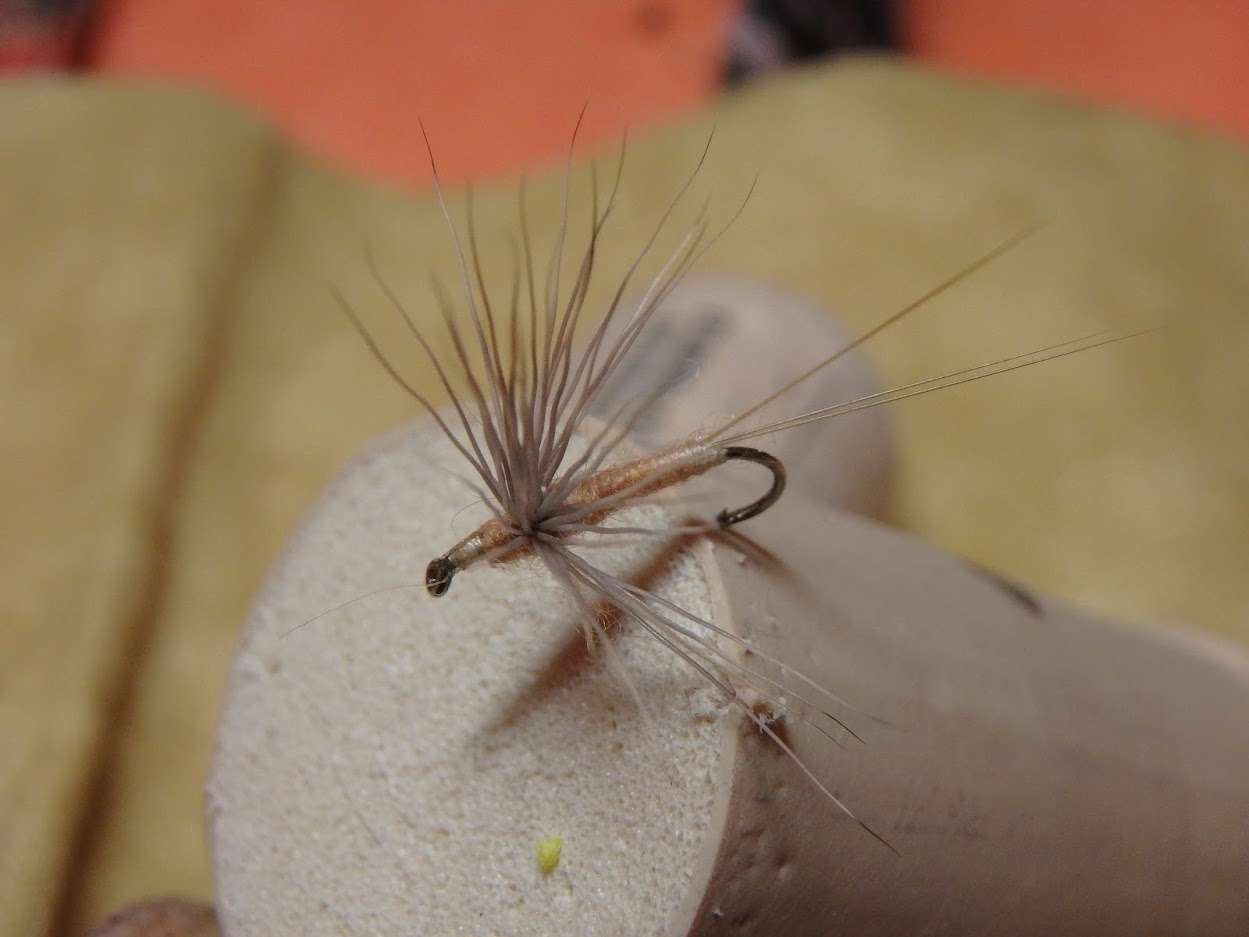 For some reason my stream interaction with pale morning duns was limited during 2018. The snowpack in Colorado was abnormally low, and consequently I visited freestone streams three weeks earlier than is typically the case, as I sought the edge fishing phenomenon. Although the water levels dropped early, I suspect the timing of mayfly emergences did not advance to the same degree. Normally pale morning duns hatch on the Yampa and Eagle Rivers in concert with elevated but manageable flows. 2018 convinced me that much of the success I previously attributed to edge fishing to concentrations of trout was in fact equally derived from dependable hatches of pale morning duns, golden stoneflies, caddis and yellow sallies. 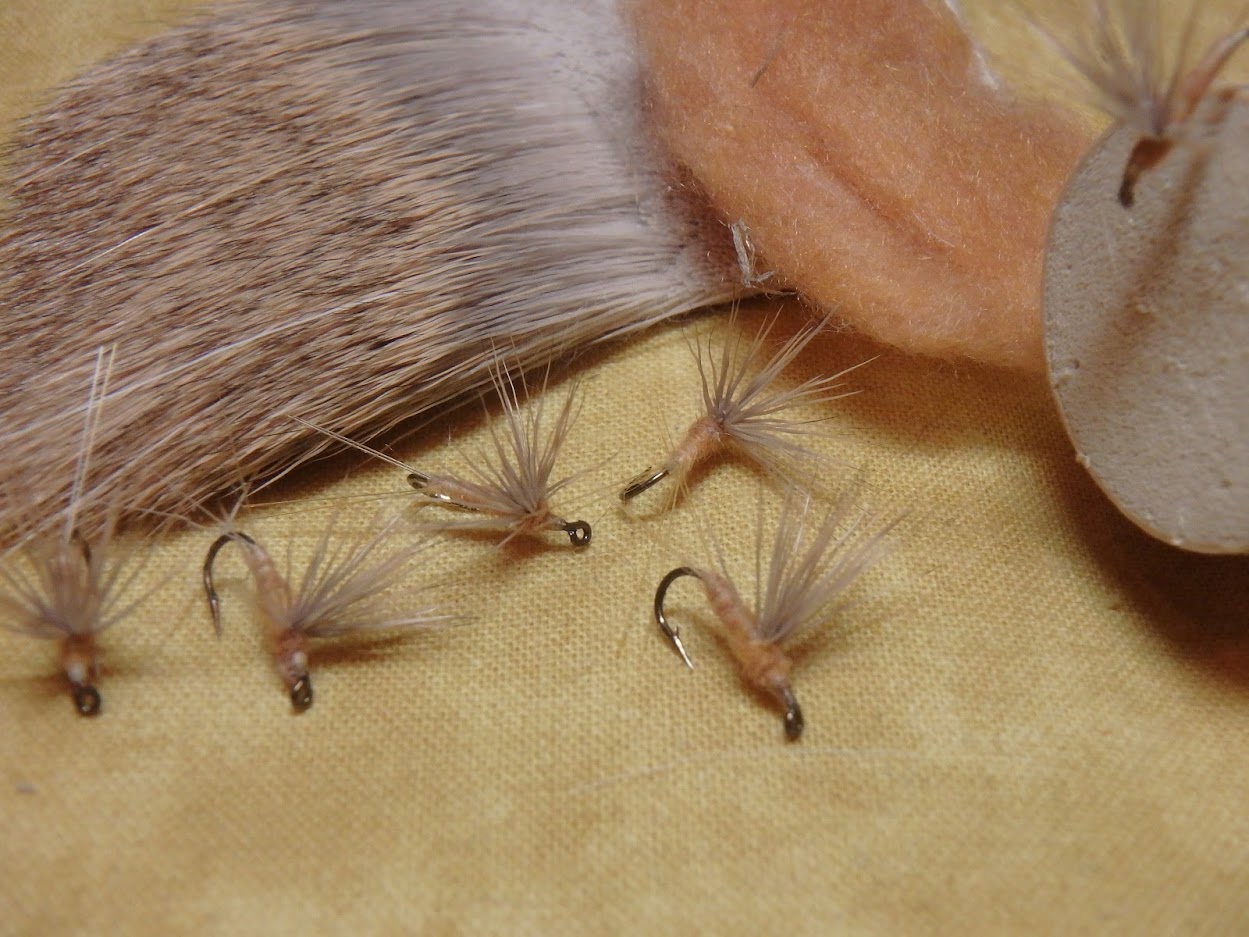 Because I failed to intersect with dense pale morning dun hatches, I did not deplete my supply of size 18 and 16 cinnamon comparaduns. I determined that I was well stocked with size 18 imitations but was a bit light in size 16’s. I used February as an opportunity to twist six new size 16 comparaduns and refurbished one size 18. During 2019 I will remain ever alert for the sight of delicate pale morning duns, as they float skyward in their adult state. Cinnamon comparaduns will be my first choice should such an occurrence transpire.

Another erstwhile effective terrestrial fly relegated to dust collecting status over the last few years is the parachute hopper. In the 2000’s and early 2010’s this fly delivered some outstanding results particularly in the August and September time frame. I continue to believe that the parachute hopper imitation is the most realistic in the eyes of western trout. My parachute hopper post of 2013 provides additional background on my experience with this classic pattern that utilizes all natural materials. 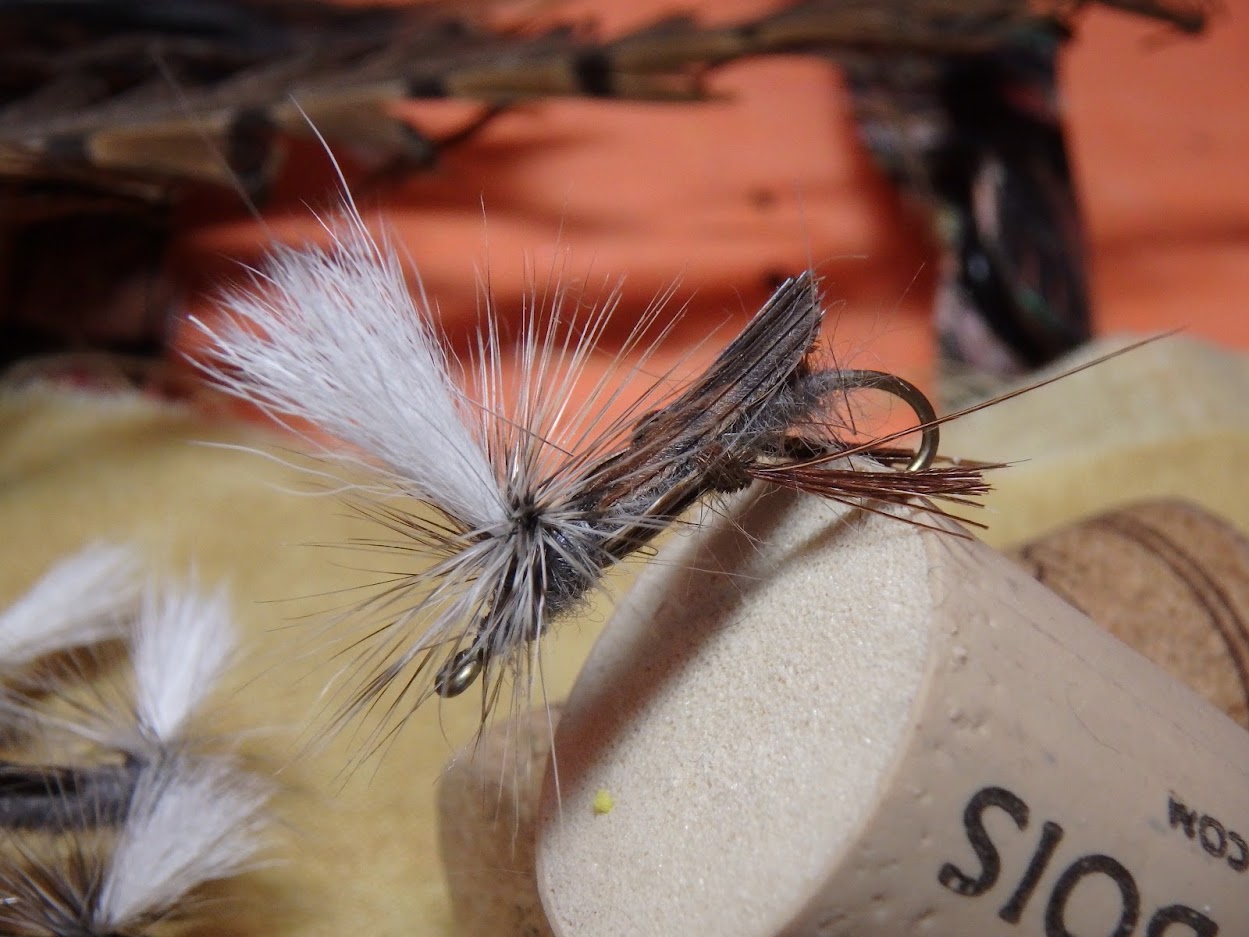 Love the Legs on This Parachute Hopper

Although my utilization of the gray parachute hopper diminished, as I gained confidence in foam imitations, I decided to count my supply as part of my comprehensive winter preparation for the upcoming season. I continue to resort to the life-like hopper during the summer, when the large bulky foam versions prompt repeated refusals. I would not wish to be on the water without a few of the old reliables in my fly box. 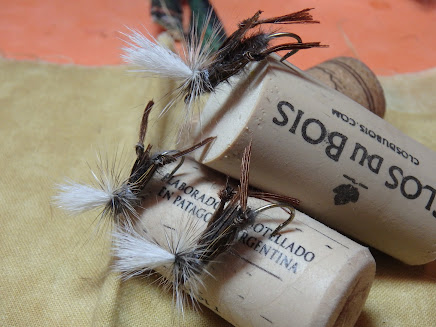 In my opinion the triggering characteristic of the parachute hopper is the knotted pheasant tail legs. I purchase pheasant tail feathers with pre-knotted legs rather than endure the tedious exercise of pulling fragile fibers through a small loop. I was pleasantly surprised to learn, that I purchased a new feather; and therefore, I possessed a more than adequate supply of legs. As was the case with the parachute green drakes, I adopted the technique of tying off the hackle to the wing post, and did the same for the whip finish. This method avoids trapping hackle fibers under the thread and results in a nice uniform spread of hackle fibers around the wing post. 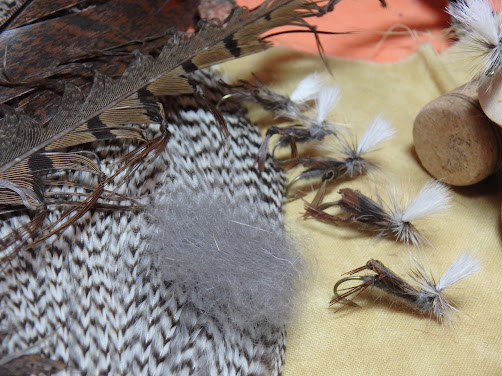 I discovered twenty-six parachute hoppers in my various containers, and I deemed this quantity adequate to cover my needs in 2019. Part of my process includes checking the canisters of damaged flies, and this exercise revealed six parahoppers in varying states of disrepair. The most common maladies were unraveling hackle and missing legs. I clamped these idle flies in my vise and converted them into viable imitations. Perhaps 2019 will be a renaissance for parachute hoppers.

Up until 2013 the yellow Letort hopper was my “go to” top fly in a dry/dropper configuration, and it maintained that status for a very good reason…it caught a lot of fish. However, I grew dissatisfied with the fly’s penchant for absorbing water in the large dubbed body, so I began to experiment with foam creations such as the Charlie boy hopper, pool toy hopper, and more recently the fat Albert. These large terrestrial patterns displaced the Letort hopper, as they performed better at supporting nymphs in a dry/dropper configuration, and they also attracted fish from time to time. 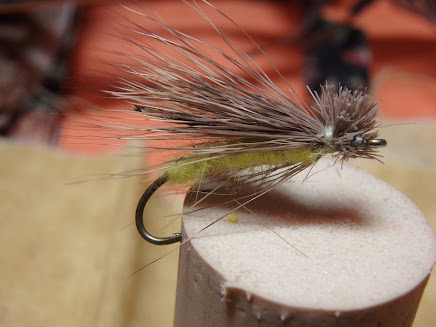 For a material list and a glowing report on the Letort hopper’s effectiveness prior to my conversion to foam check out my 12/9/2011 yellow Letort hopper post. Another post simply titled yellow Letort hopper provides additional insight on this terrestrial fly. My love affair with the old classic provoked me to tie a large quantity, and my inventory remains quite adequate given my reduced usage. I often wonder if more time on the line could return this fly to its former glory, and occasionally I knot one on my tippet. The ploy yields a fish or two during the season, but I suspect that my commitment and confidence are lacking, and this results in diminished production from the old favorite. 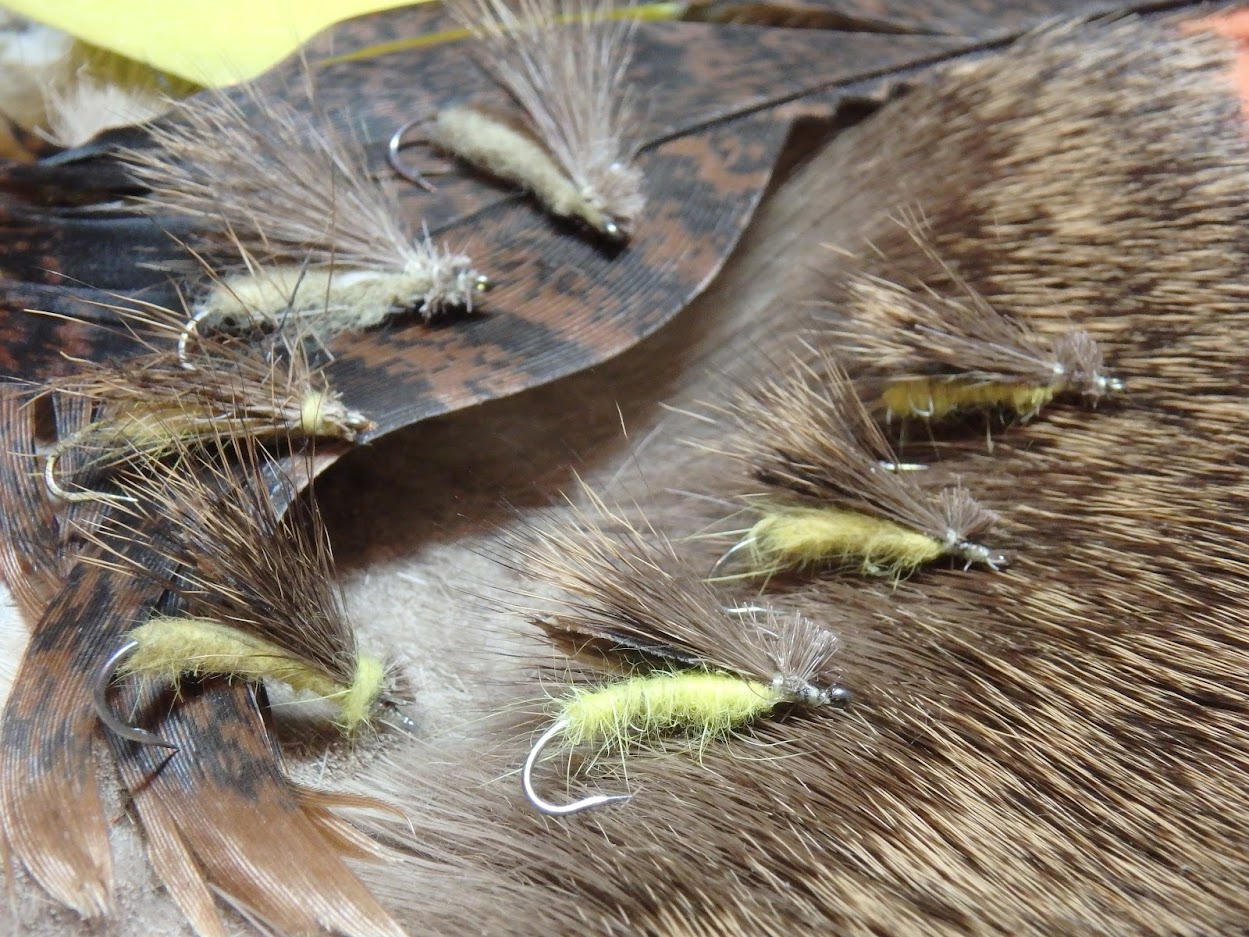 I counted my large supply and determined that I possessed in excess of forty in my combined fly storage containers. I decided to sort through my six canisters with damaged and unraveling old flies, and I was surprised to find seven models in varying states of disrepair. I sat down at my tying counter and refurbished these hopper imitations, and in most cases I salvaged the body and tied on a new turkey wing segment for the underwing and a new deer hair wing. Perhaps 2019 will be the year that I recommit to the Letort hopper, but I suspect that will not be the case. I do feel that a size 10 yellow acts as a reasonable imitation of a golden stonefly, so perhaps I will select the Letort hopper more frequently during prime golden stonefly activity in late June and July.

Although I remain very optimistic that the user friendly green drake will prove to be a successful fly during western green drake hatches, I decided to cover my bases by reviewing my inventory of the other green drake flies that delivered outstanding results during previous years. At the top of this list is the parachute green drake. I first began tying this fly in 2012 after some frustrating encounters with green drake hatches on the Frying Pan River. My post of 09/11/2012 provides a materials table and some brief notes regarding my introduction to this parachute style dry fly. 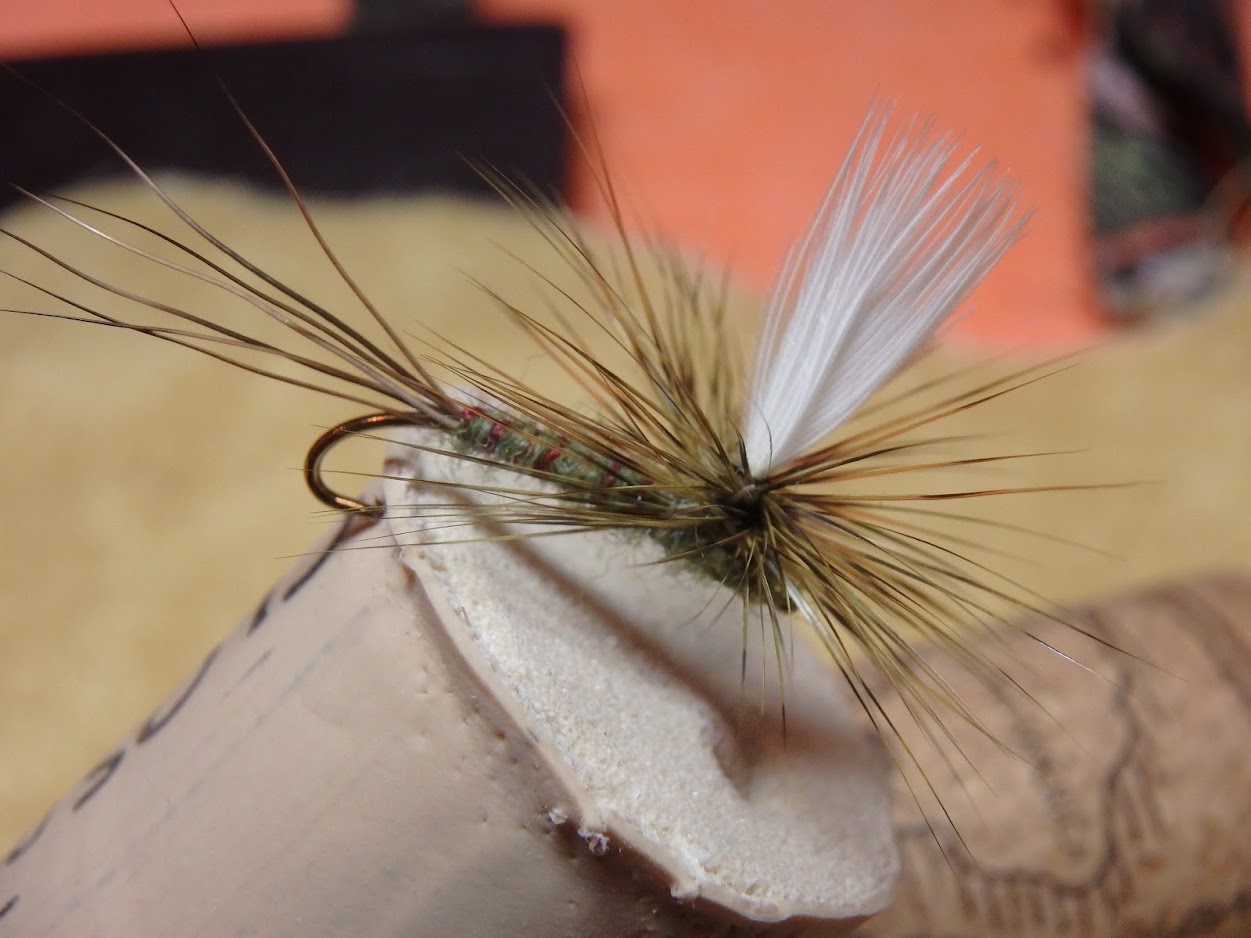 Should Be Very Visible

I typically stock three styles of green drake adults in my fly box, and the user friendly will increment that count to four. A size 14 parachute green drake is my most consistent producer, and I usually default to this balanced low floating version first. The comparadun and Harrop hair wing have their moments, but the paradrake seems to fool fish in a wider range of circumstances. 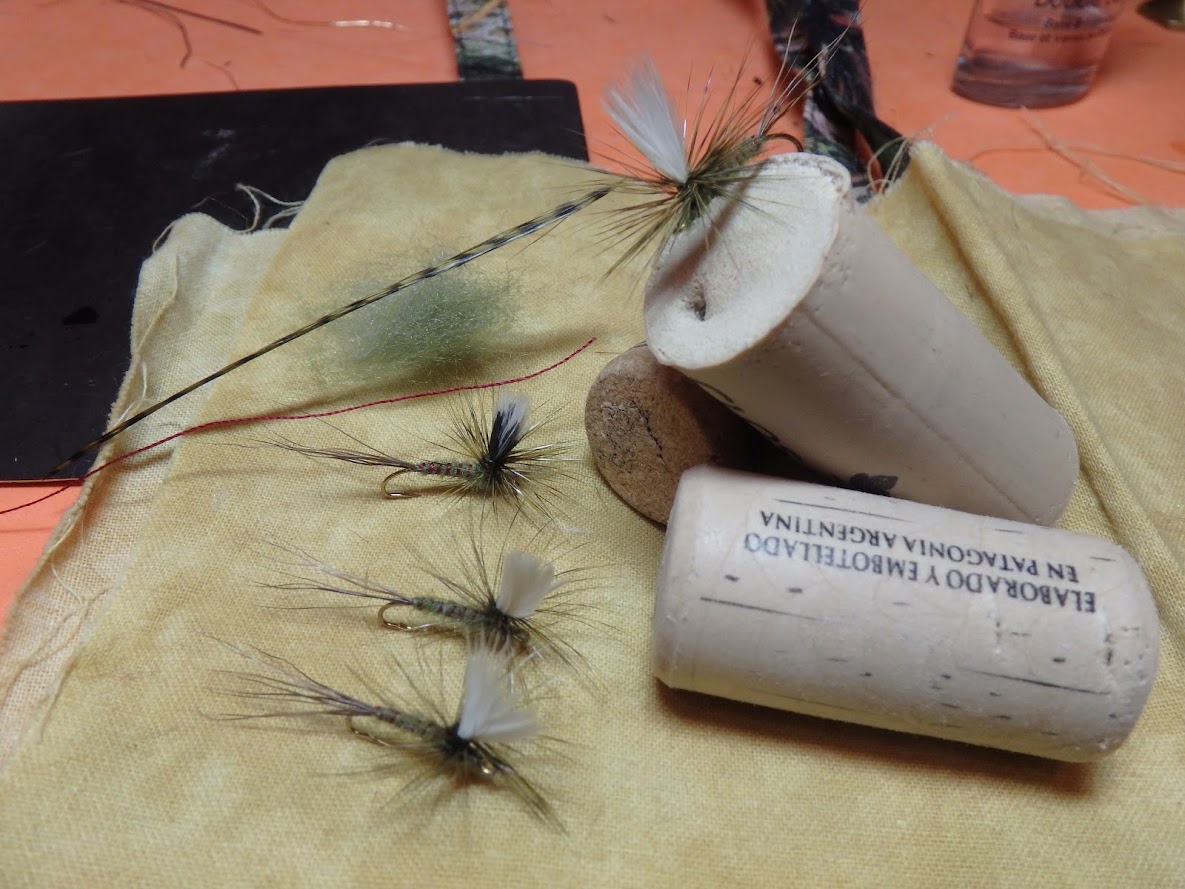 I love the white wing post on the parachute green drake, as it enables much better visibility than can be obtained from the olive earth-toned deer hair wings of the comparadun and Harrop versions. Floating a large size 14 fly with no hackle, as is the case with the comparadun, is also very challenging.

Since I began constructing parachute green drakes in 2012, I adopted two significant modifications that improved the appearance. Several years ago I viewed a technique on YouTube that demonstrated tying off the hackle against the wing post as well as whip finishing the fly at the same point. I applied this method to my parachute flies, and I was extremely pleased with the results. Trapped hackle fibers and gaps in the concentric wraps became a problem of the past. 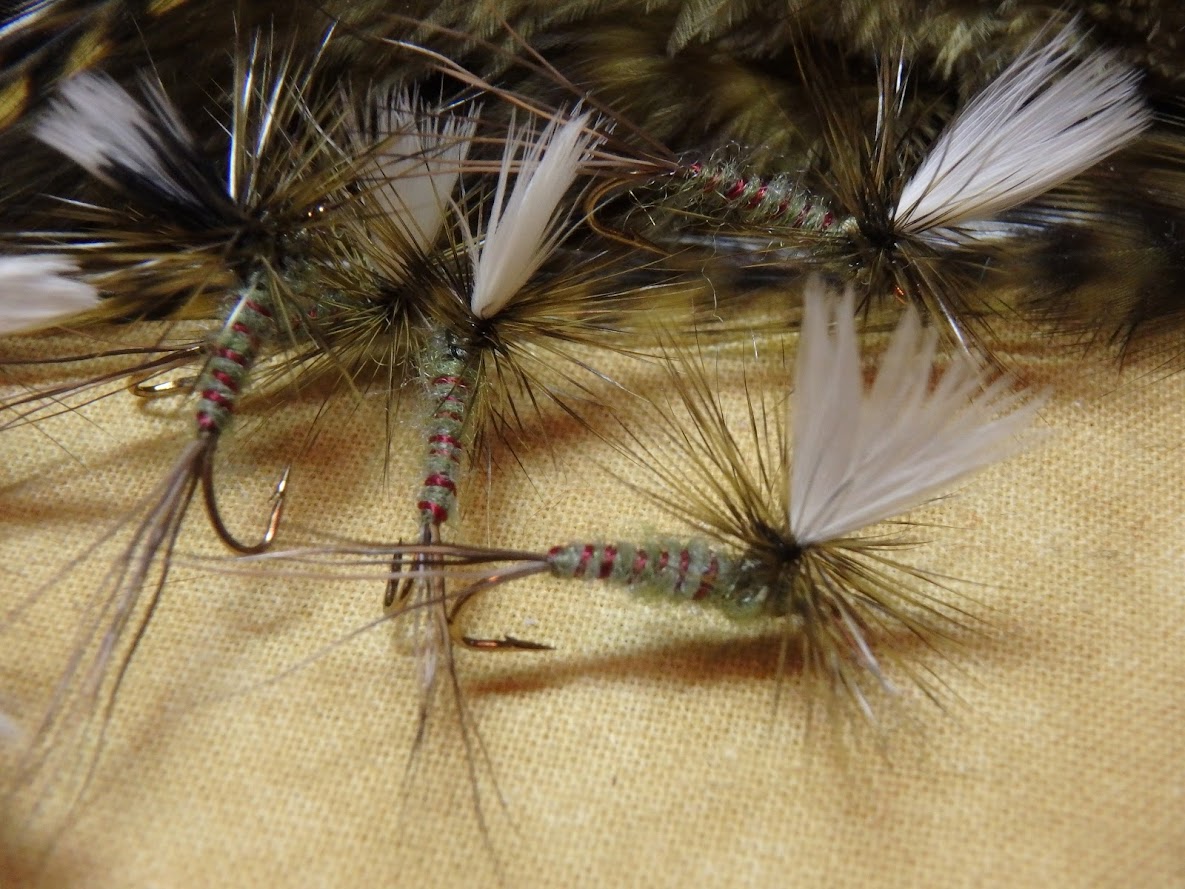 I implemented my second improvement this winter, and once again I feel certain that it will be a permanent change. I substituted white turkey flat feathers for white calf body hair as the wing post. I read about this wing variation for parachute flies in A.K.’s Fly Box by A.K. Best. The turkey flat feather is not as dense as the calf body hair, and consequently it is easier to work with. The feather option is easier to stand up, provides less bulk at the front of the fly, and serves as a solid base for wrapping the parachute hackle. 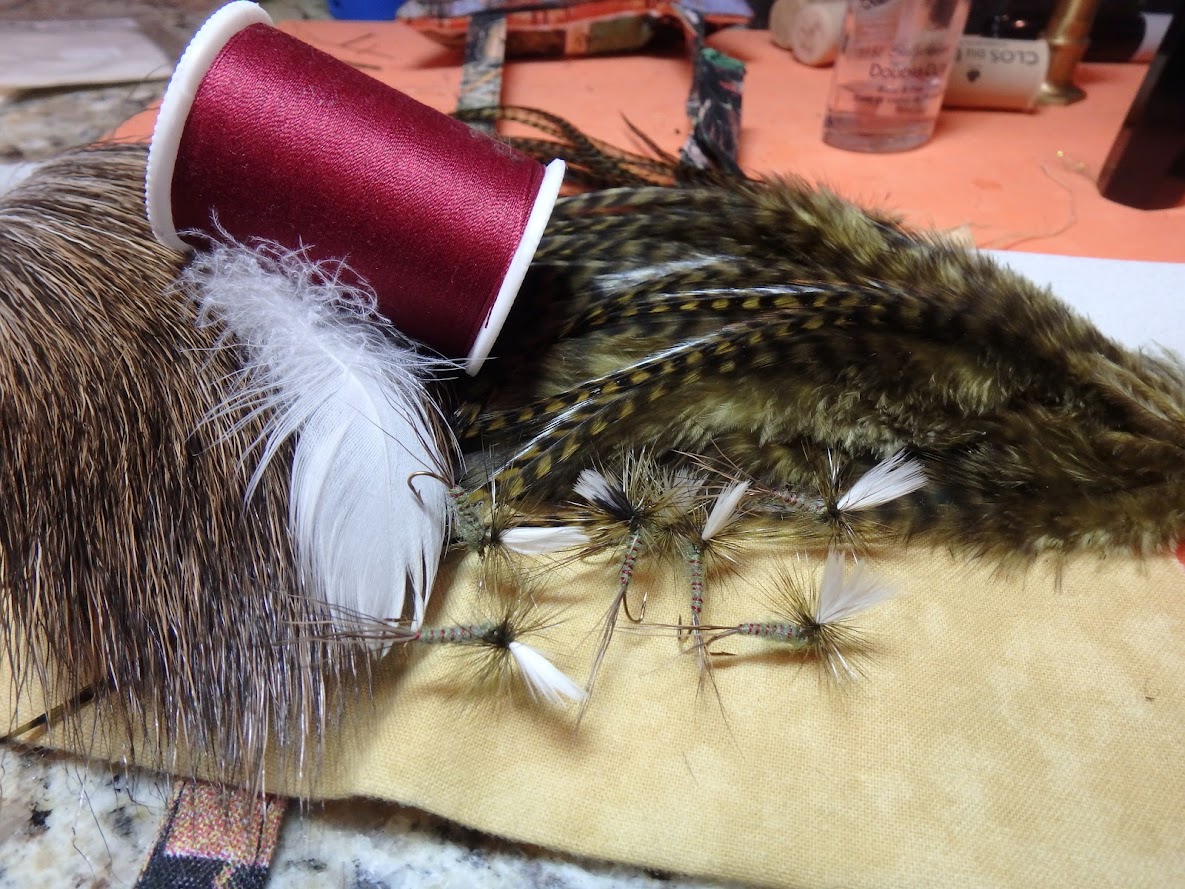 When I counted my green drakes, I determined that I maintained adequate supplies of all size 12’s as well as the comparaduns and Harrop hair wings in size 14. However, my quantities of size 14 parachutes shrank below the reorder point, so I produced seven additional versions. Green drake hatches cannot arrive soon enough.