Prior to my trip to Rio Manso Lodge in December of 2013, Taylor Edrington of Royal Gorge Angler suggested that I take some large caddis along to Patagonia. I accepted his suggestion and cranked out 15 – 20 stimulators with various body colors. I made bushy attractors in light olive, yellow, tan, gray, black and peacock. I recall only using a stimulator once or twice on the trip with no resulting hook ups, so I returned to the U.S. with a nice supply of size 14 flies available for the 2014 season. 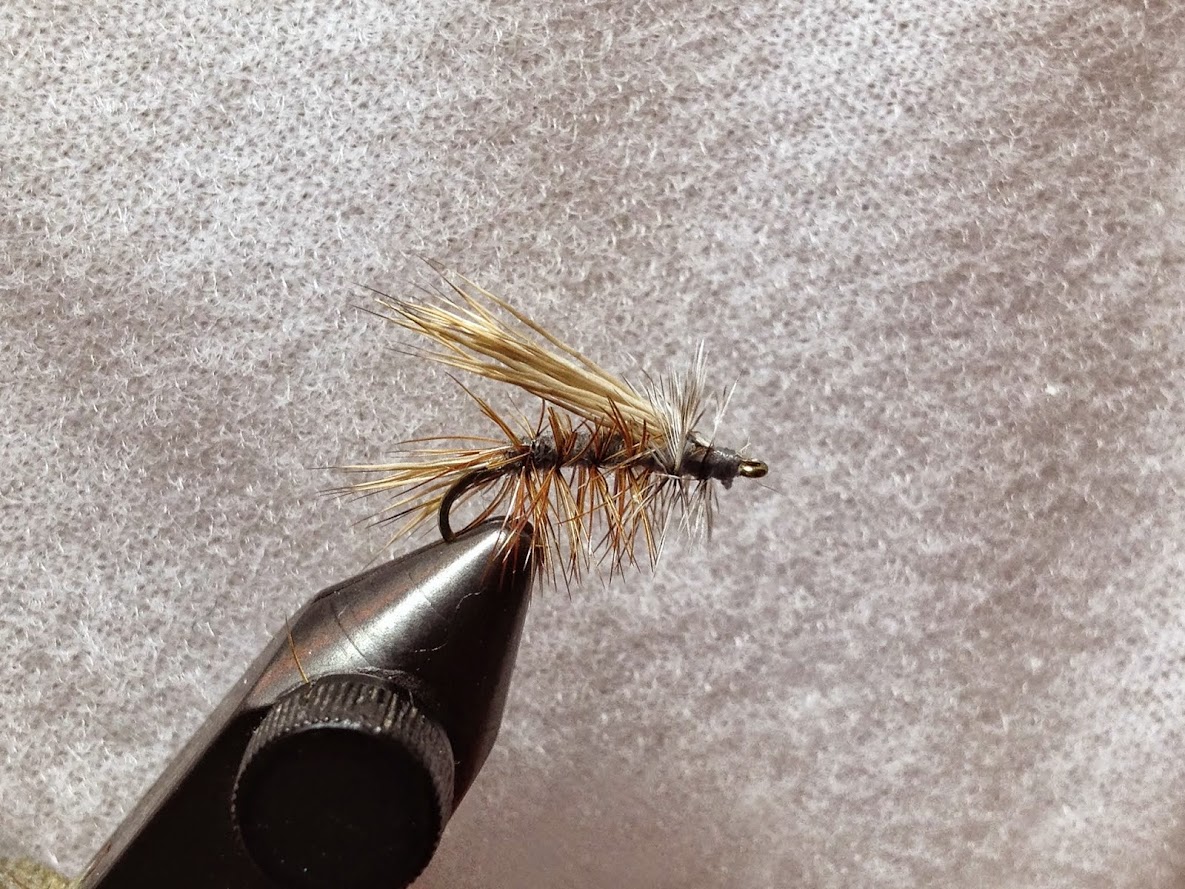 Early in the summer after the run off conditions subsided, I began experimenting with my stimulators and discovered that they were quite productive. The success began on South Boulder Creek and continued on the small streams that I fished in Idaho, Rainey Creek and Bear Creek. I loved their visibility and the way they remained on the surface in fast turbulent pockets and runs. I reached the point where I would not want to be without my stimulators while fly fishing in the west. 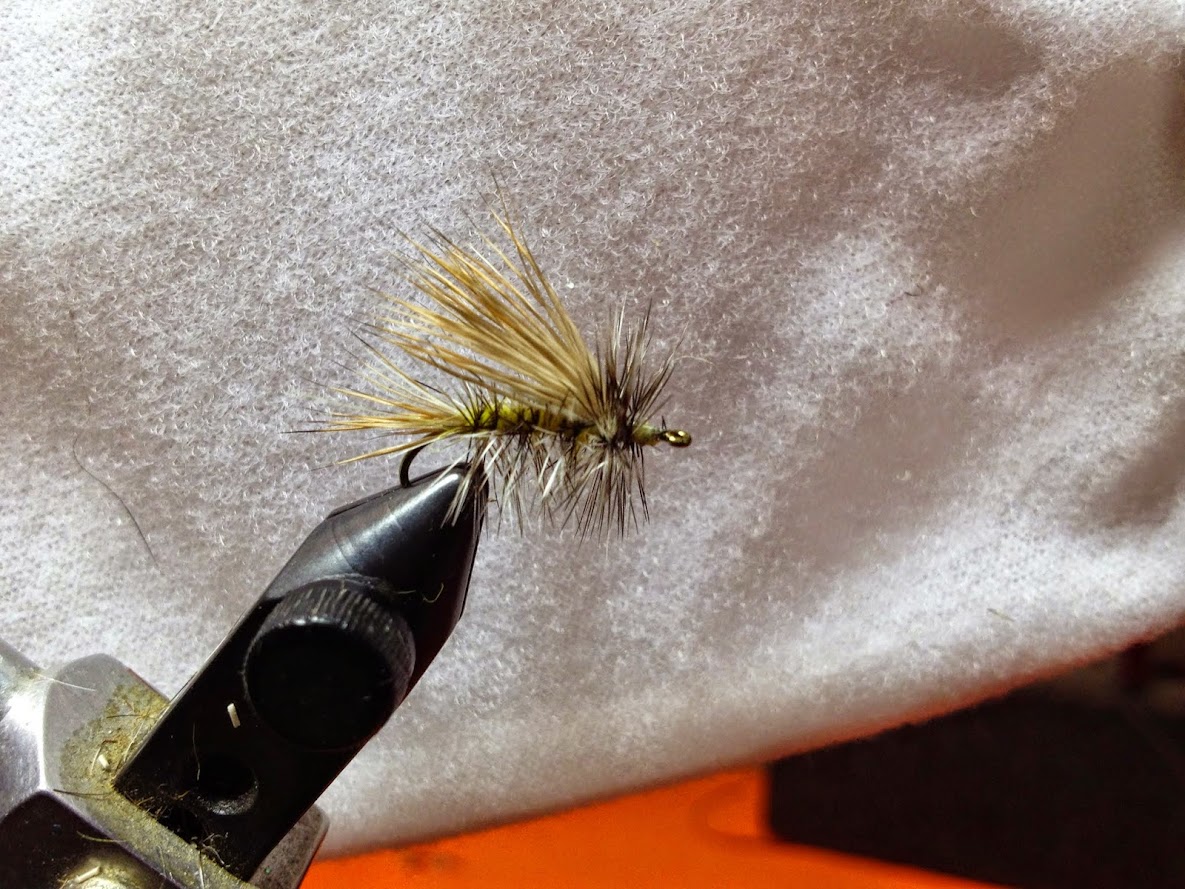 Meanwhile the zipper on my Fishpond front pack broke, and I could not completely close the one side of the inside pocket where I stored my fly boxes, tippets and leader material. I was hesitant to take the front pack out of service during the season as this would have involved transferring all my gadgets to an old-time vest, so I attempted to make do with a partially closed pocket. This proved to be a mistake. 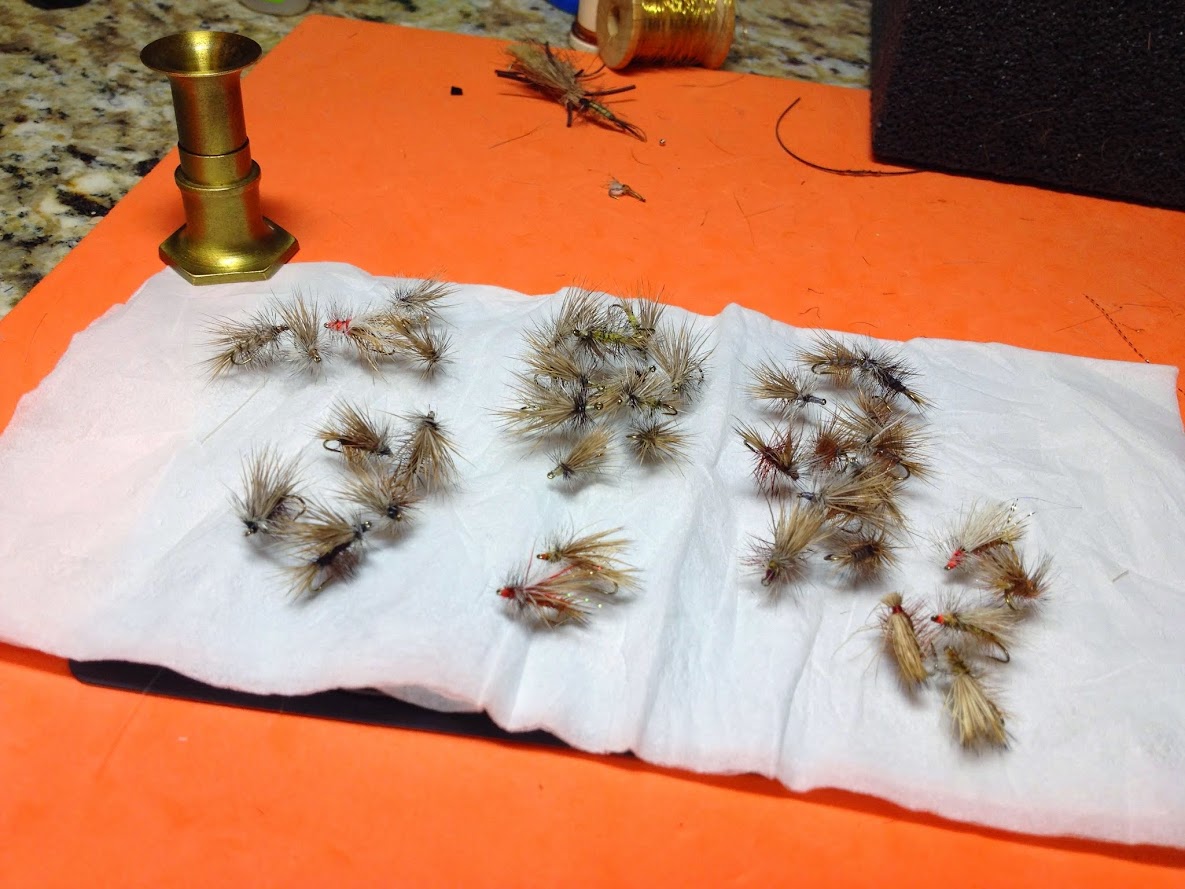 On a September trip to the Frying Pan River I landed a small brown trout on a dry/dropper arrangement, and the frisky fish made numerous spins in its valiant attempts to escape my hook. These maneuvers caused one of the worst tangles I’ve ever experienced in my career of fly fishing. I eventually had to snip off the entire tippet section and begin anew, however, while making all these changes while standing in the middle of the river, I apparently squeezed my fly box out of the inside pocket and into the river. 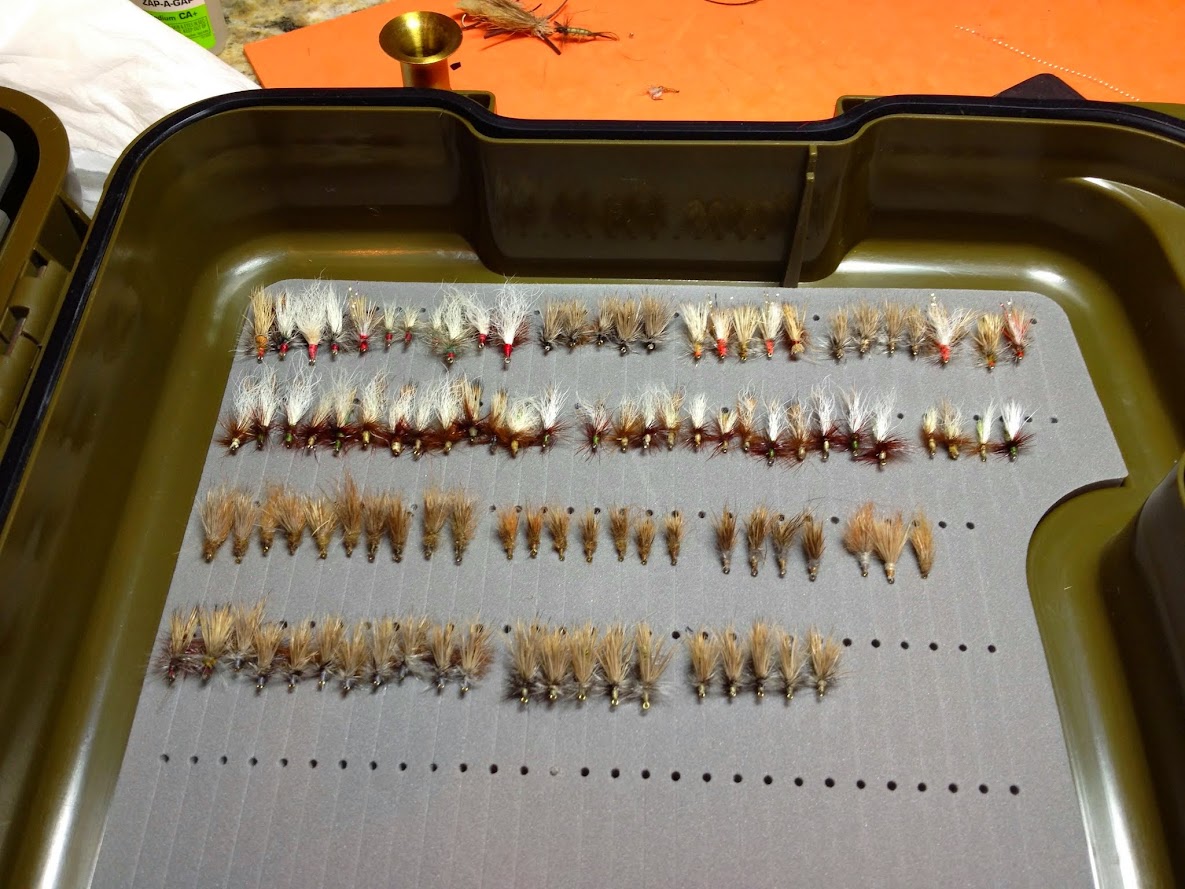 Beginning to Fill the Boat Box with Stimulators, Trudes and Muggly Caddis

When I realized that it was missing I searched the area frantically hoping that it became lodged on a rock or branch as it floated downstream. Alas, it was nowhere to be found. The fly box that escaped my front pack was the very same one that contained my entire supply of stimulators. Needless to say I was heartbroken over this loss.

Prior to a subsequent late season fishing trip I purchased ten replacement stimulators, and I lost a few of these, so I decided to replenish my supply last week. I now have 25-30 fresh high floating stimulators stashed in my fly bin ready and waiting for the 2015 season.

As I mentioned in a recent post on the pool toy, I became reacquainted with the Charlie Boy hopper during 2014. Several winters ago I tied approximately ten in my ongoing quest for an effective imitation of a grasshopper that also floats well, is visible, and supports a size 14 beadhead nymph. The Charlie Boys fulfilled the need for visibility and buoyancy, but I was dissatisfied with their fish catching capabilities.

If you read the pool toy post, you will learn that my dwindling pool toy supply caused me to fish a tan Charlie Boy simply as a sophisticated strike indicator, and I was surprised to discover that the old Charlie Boy was in fact a strong attractor. I landed quite a few nice fish that succumbed to the allure of Mr. Charlie, and in fact two of the foam specimens were mauled by a series of teeth cuts.

With this new perspective on the Charlie Boy hopper, I manufactured another ten to replenish the supply that I created in 2012. Hopefully the foam hopper proves to be a lasting winner, and not just a one season flash. Stay tuned.

I have probably skied at Breckenridge 30-50 times in my lifetime, yet I discovered yesterday that much undiscovered terrain remains. I can thank my friend Fred Young for guiding me to new high elevation adventures.

Jane and I felt that we were sufficiently recovered from a pair of nasty colds in early January, so we arranged to meet our friends, the Youngs and Gaiges, at Breckenridge. All of us skied together in the morning after rendezvousing at the Peak 7 base, but Douggie Young excused herself as we boarded the T-bar at Peak 7, and we eventually reunited with her at the Vista Haus for lunch.

Fred and Douggie rent a house in Dillon, CO, and they join senior groups on set days of the week. During these gatherings, Fred tours Breckenridge and Keystone and learns about all the nooks and crannies bypassed by most skiers. After lunch the girls split from the guys, so Fred led us on a private tour of the upper reaches of Breckenridge. We seemed to bounce back and forth between the above timberline terrain available from the T-bar and the Imperial lift. It was a blast as we skied Whales Tail, Horseshoe Bowl and some chutes south of the Imperial lift that we reached without removing our skies and climbing.

We’ve already made plans to rejoin at Vail next Thursday, January 29. I can’t wait.

I’ve written several posts on the pool toy hopper imitation, and you can read them at Grillos Pool Toy and Pool Toy 02/14/2014. I’ll avoid being redundant by resuming my commentary where I ended on my post from 2014.

I made another four last winter to put my supply at around fifteen, and I carried three or four along with me on my trip to Argentina, but they never got wet. During the spring, summer and fall season I did indeed cast a pool toy as a top fly in a dry/dropper configuration more frequently than in the previous year. This resulted in a few more success stories, however, I still feel that a Letort hopper or parachute hopper would out fish a pool toy if used a comparable amount of time.

The pool toy does offer great buoyancy and visibility, thus, it spends more time on my line admittedly as a sophisticated indicator. Because of its ability to remain afloat while a size 14 beadhead nymph is suspended two feet below, the pool toy was used fairly frequently. This resulted in the loss of quite a few flies mainly in situations where a fish grabbed the nymph, and in its valiant efforts to escape broke off both flies.

By the end of August my supply of pool toys dwindled to the point that I began opting for a tan Charlie Boy hopper to preserve my few pool toys for September. Guess what happened? I rediscovered the tan Charlie Boy and experienced some hot hopper fishing in September and October on this forgotten fly that was exiled to the end of my fly bin. Days on the Arkansas River and Yampa tailwater stand out as two examples where the tan Charlie Boy yielded numerous good sized fish. In fact, the tan foam bodies became so mangled that I had to replace them.

The pool toy was effective enough to merit a decent supply for another season, so I tied thirteen over the last couple of weeks including eight tan, two gray and three yellow. I have approximately 15-20 in inventory, and I’m anxious to continue experimenting with the pool toy in 2015.

Nearly all that I can say about the Chernobyl ant is contained in my three previous posts on this workhorse fly. In my last post which can be accessed using the link above, I mentioned using a new method of tying the foam body that would hopefully eliminate the spinning problem that plagued my ants previously. After using flies constructed in this manner during 2014, I can report that the fold over method does in fact largely eliminate the problem of the foam layer spinning around the hook shank.

The Chernobyl ant continued to be my favorite large buoyant attractor fly during the past season, and I deployed it often in a dry/dropper configuration. I cannot support this statement with statistics, but it did not seem to be as effective as previous seasons. There was a period during the early summer when I was having great success with size 14 stimulators, and then in late summer and early fall the Charlie Boy hopper surprised me with its effectiveness.

Despite these deviations in performance, I remain an enthusiastic proponent of tying a Chernobyl ant to my line, and I will continue to do so frequently in 2015. For this reason I sat down at my vice over the weekend and churned out 15 new Chernobyl ants. In addition I refurbished three more that resided in my broken fly canister. I cut the black foam strip to a point and then tied the arrow point to the shank of the hook and then folded it over the top. For legs I used primarily barred sexi legs, and I cut them to 1/4 – 1/2 inch in length. I discovered that the longer legs cause the fly to land upside down more often than desired.

I’m anxious to toss a Chernobyl ant on flowing water in 2015 because that will mean that milder weather has arrived, and fish are looking toward the surface for their meal.

I never succeeded in documenting my top ten fishing outings in 2013, but after significant time spent reading my 2014 posts, I’m prepared to suggest a new top ten. It is always fun to review my fishing adventures while avoiding the cold snowy weather currently gripping Colorado.

10. Lake Crescent 08/11/14 – My first trout ever in the state of Washington was a thirteen inch crescenti cutthroat, a species unique to Lake Crescent in Olympic National Park. I did not catch many fish, but the unique species and the spectacular setting put this in the top ten.

9. Camp Creek 06/05/14 – I landed eighteen small brown trout from this small spring creek in the Driftless Area of Wisconsin. It is always fun to experience success in new water, and this small meadow stream reminded me of many streams in my home state of Pennsylvania.

8. Eagle River 07/17/14 – Despite a tent catastrophe the night before, I persisted to join Todd Grubin for a great day on the Eagle River. I began with some nice action at the rest area, and then Todd escorted me to fish private Arrowhead water farther upstream. Strong numbers and size put this day in the top ten.

6. South Platte River 08/22/14 – A rare day devoted to fishing with my son in a gorgeous remote setting is hard to beat. Landing a bunch of fish makes it even more fun.

4. North Fork of the White River 09/16/14 – This was my best day of the year in terms of numbers, and amazingly I could have landed 70 had I not experienced so many long distance releases. This all took place after a four hour drive to the Flattops from Denver; a fabulous half day of fishing.

2. Arkansas River 09/05/14 – How could the tried and true Arkansas River deliver the second best fishing outing of 2014? Simply by delivering thirty-four fish to my net with plenty of them in the 14-16 inch range. A bonus was discovering that the Charlie Boy hopper was productive in the afternoon. It was perhaps my best day ever on the Arkansas River, and that says a lot.